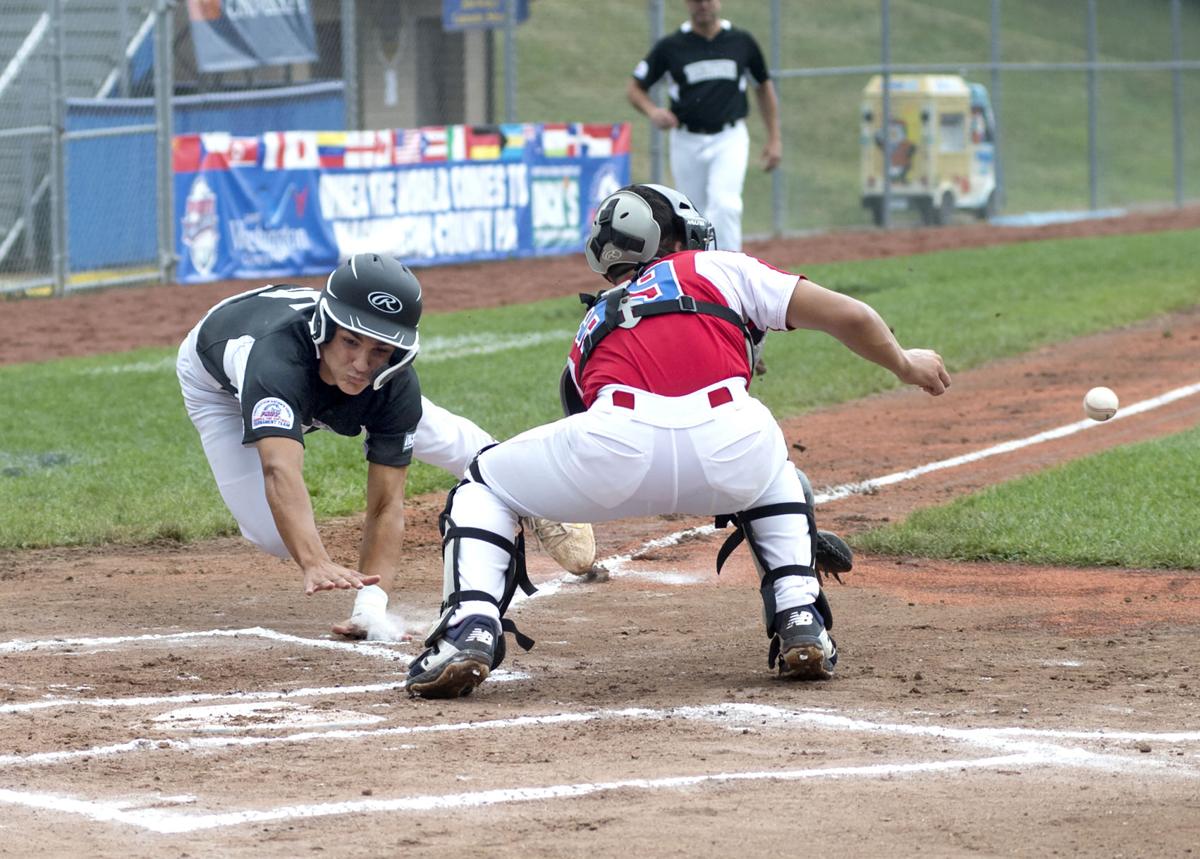 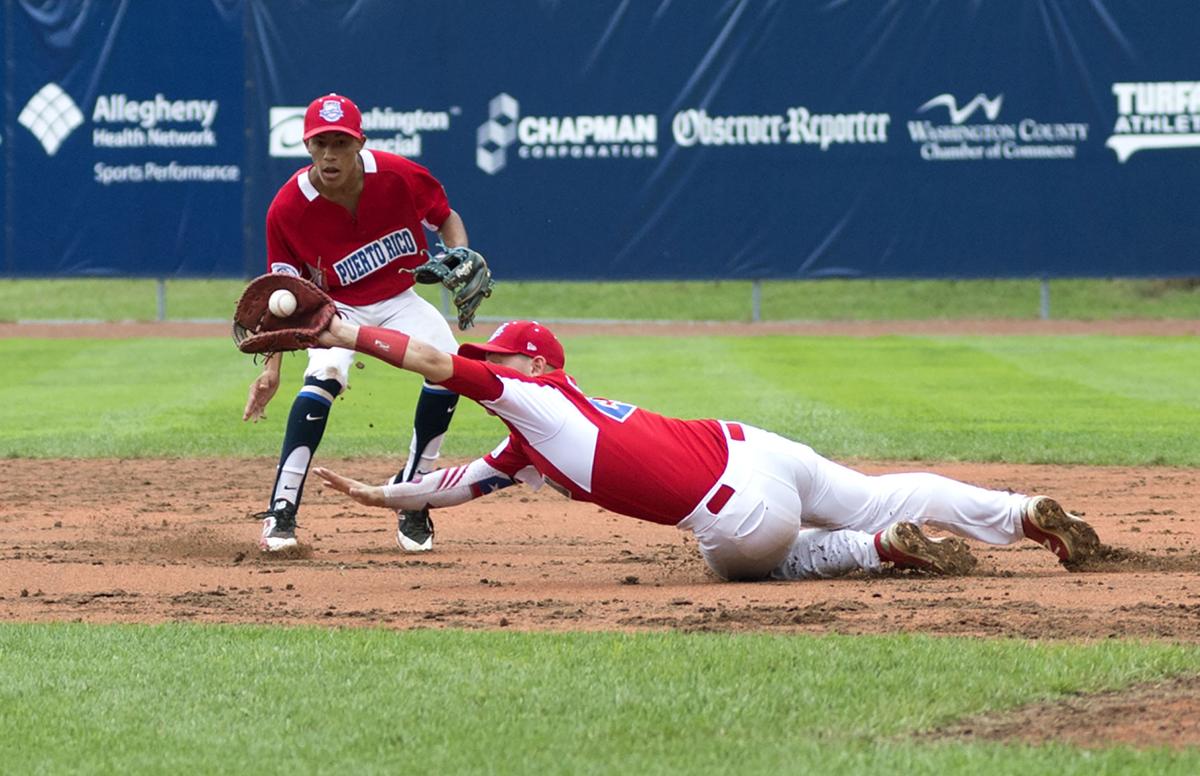 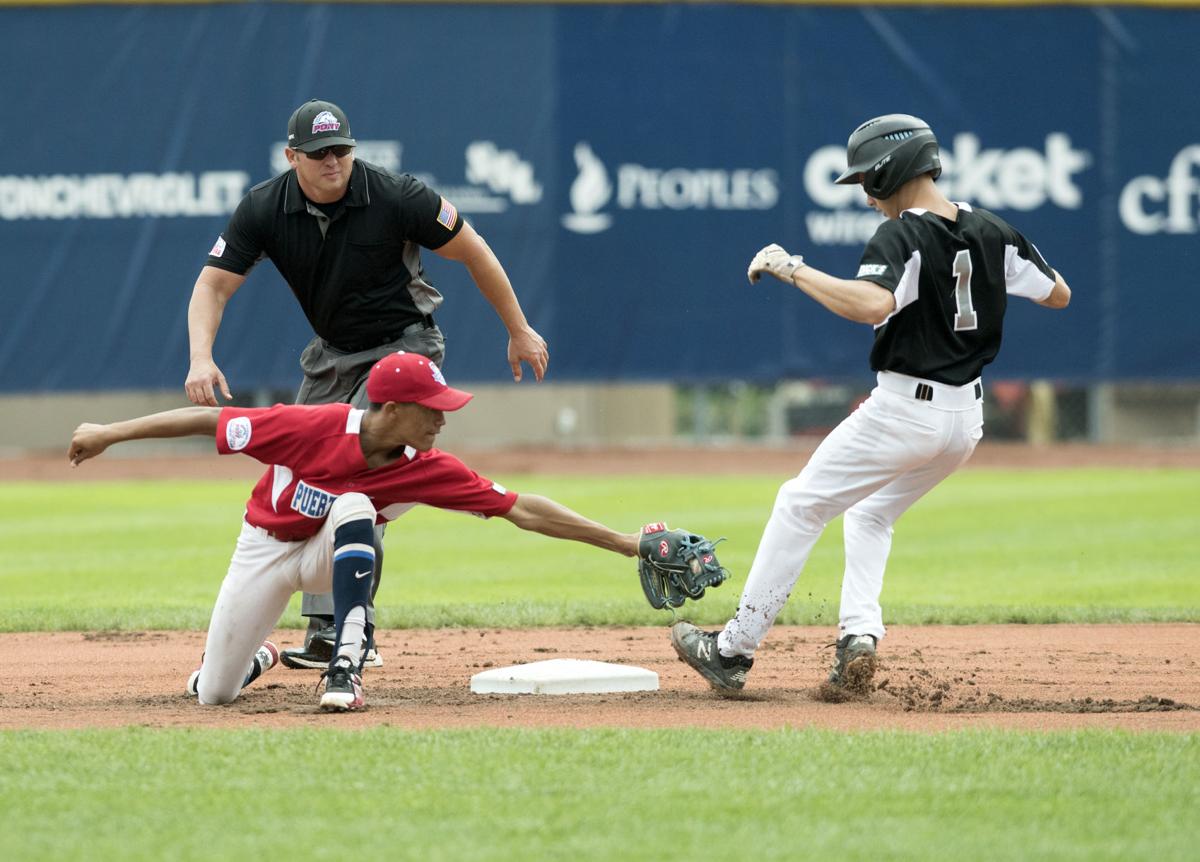 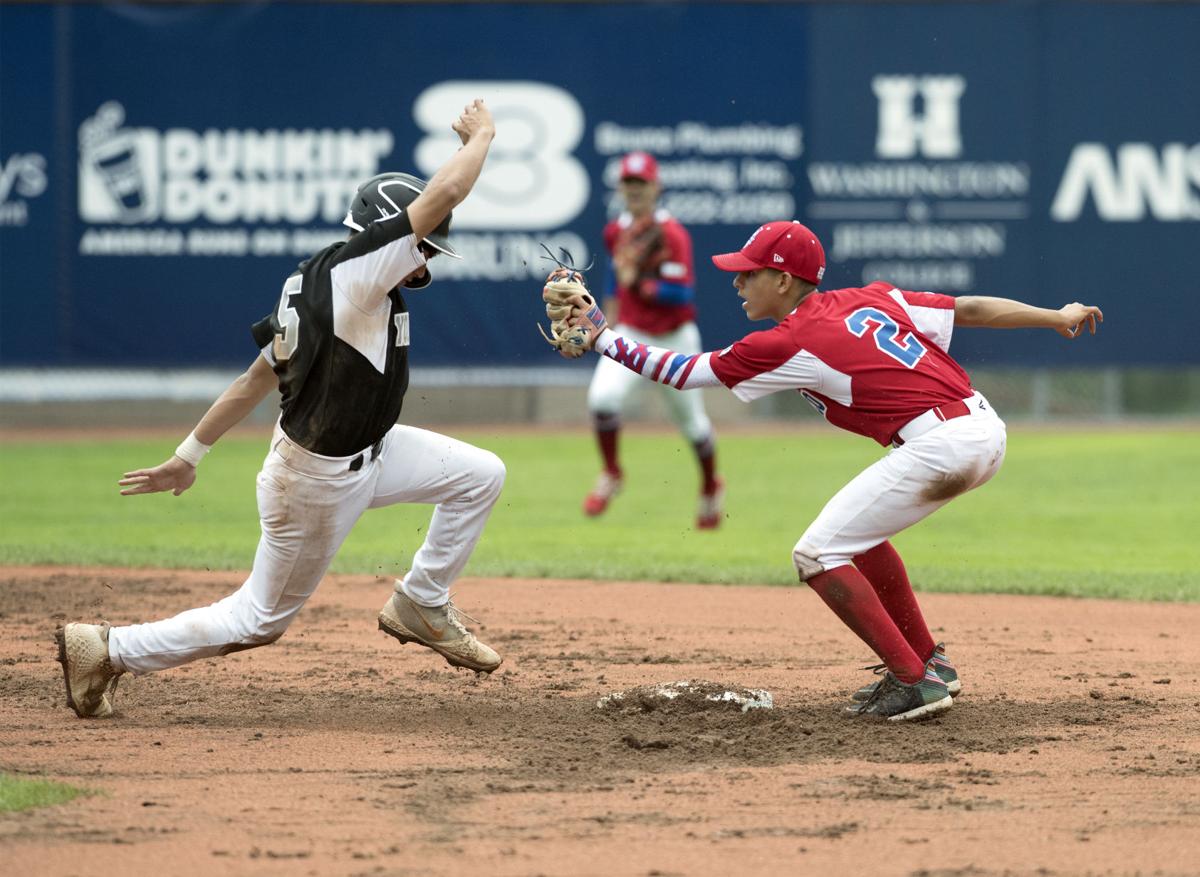 Youngstown’s Anthony Miller gets tag out by of Puerto Rico’s Jhenzel Figueroa in the Pony League World Series at Lew Hays Pony Field in Washington on Tuesday, August 13, 2019.

Youngstown’s Anthony Miller gets tag out by of Puerto Rico’s Jhenzel Figueroa in the Pony League World Series at Lew Hays Pony Field in Washington on Tuesday, August 13, 2019.

Its elimination game against Arecibo, Puerto Rico, was scheduled for 10 a.m. Because of mother nature, it didn’t get started until close to 1:30 p.m.

On the field, the team made two errors leading to two runs, and had five runners thrown out on the base paths.

Despite the day going off script, Youngstown got the result it needed, beating Arecibo, 9-5, to keep its hopes alive in the Pony League World Series.

“At this point, it’s win and advance,” manager Scott Ruark said. “You have to win to get to the next game, and (then) who knows what can happen?”

While Youngstown had its issues on defense and running the bases, pitching was a strength for the team. Starter Braeden D’Angelo picked up the win, giving up just one earned run on four hits while walking three and striking out eight over five strong innings.

“Braeden pitched an outstanding game,” Ruark said. “He kept them off balance. The curveball was working. He went to that pitch on some tough counts. He really did a great job for us.”

After D’Angelo’s day on the mound came to an end, Stephen Tarnoci came on in relief. He struck out the side in the bottom of the sixth before giving up a leadoff double in the bottom of the seventh. At this point, Ruark gave the ball to Dom Fornataro to make sure Tarnoci, who had only thrown 18 pitches, would be available should Youngstown advance.

Arecibo put up a fight in the seventh, scoring two runs, but Ben Slanker came on to get the last three outs to send Youngstown through and put an end to Arecibo’s first Pony League World Series.

Youngstown’s bats bounced back from scoring just one run against Chinese Taipei the night before by pounding out 14 hits. Six players had multi-hit efforts, and Luca Bertolasio, Anthony Miller and Anthony Malagise each drove in a pair of runs.

It took Youngstown just three batters to jump out to a 2-0 lead. After Bertolasio led off the game with a double, Miller drove him home with a single to begin the scoring. Two batters later, Miller and Slanker combined for a double steal to manufacture the second run. Youngstown added another in the third and two more in the fifth. Aercibo’s starter, Marcos Arocho, only lasted two innings, allowing three runs on six hits and taking the loss.

In the bottom of the fifth, Puerto Rico scored three runs to cut the deficit to two. It would remain that way until the top of the seventh, when Malagise hit a two-run homer to put the game out of reach.

Though Youngstown did what it needed to do, Ruark knows his team must clean up its game to advance.

It was a strong showing for newcomer Arecibo, which picked up wins over Hagerstown and Guasave, Sinaloa, Mexico before bowing out Tuesday afternoon. Youngstown will play on, and look to avenge Monday’s 8-1 loss to defending champion Chinese Taipei. That game will take place at 5:30 p.m., today. Ruark knows what lies ahead of his team, and knows how much has to go right for it to come out on top against one of the tournament’s giants.

“We want to go against them,” he said. “They will not beat themselves, so we cannot beat ourselves.”