Peters Township’s Michael McDonnell soars through the air to the basket for two points Friday against Bethel Park. 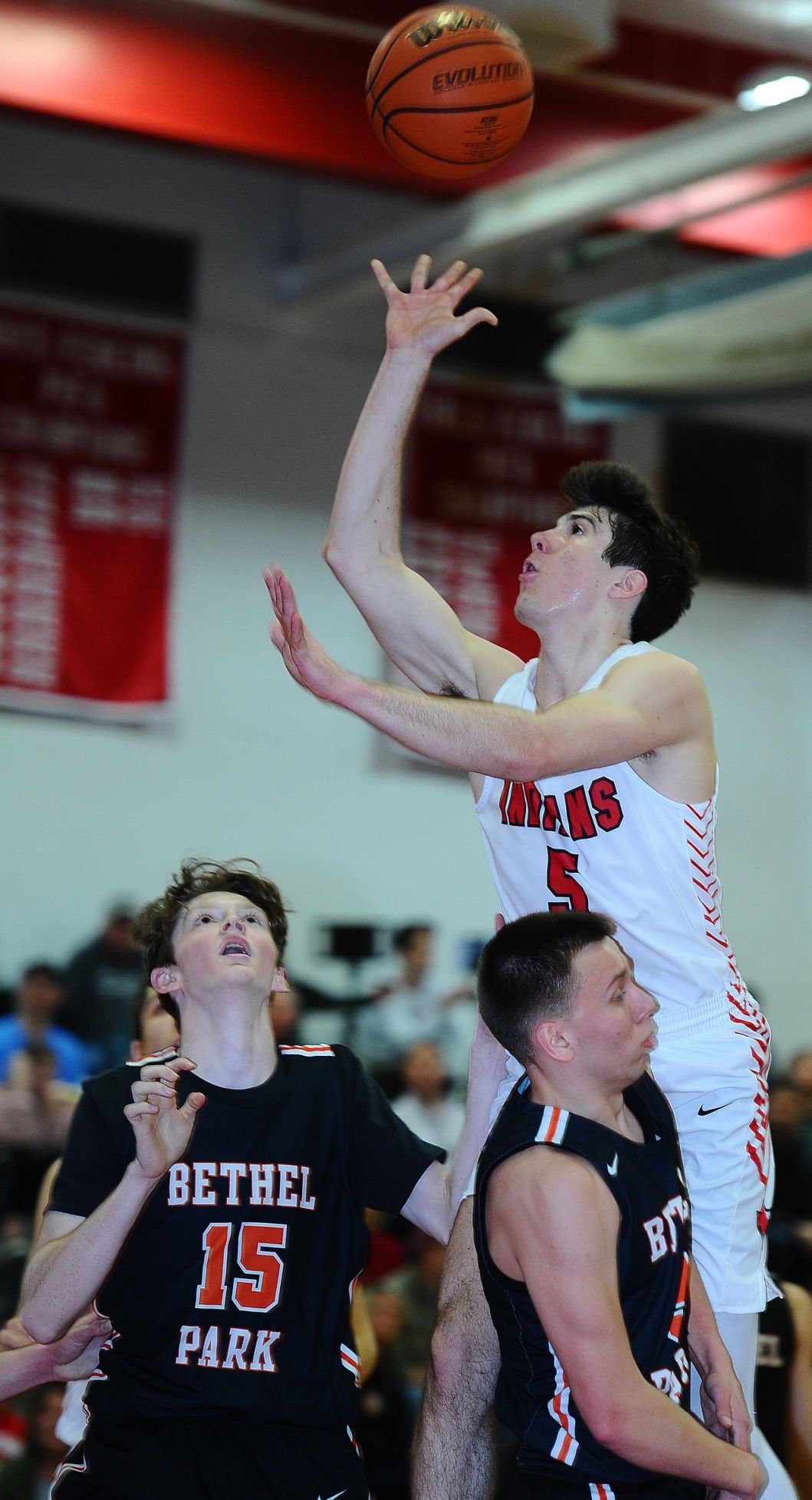 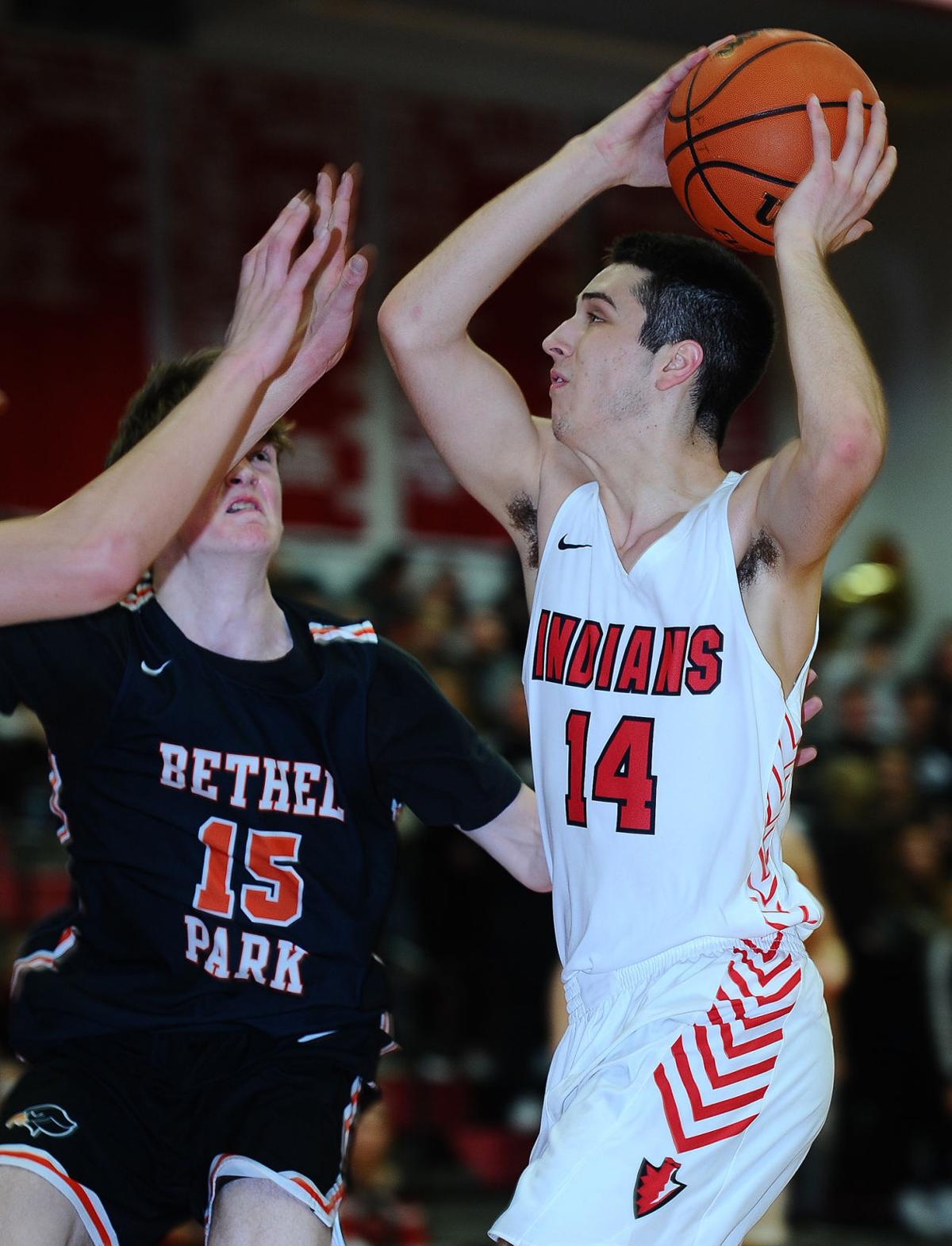 Sam Petraca (14) drives into the teeth of the Bethel Park defense. 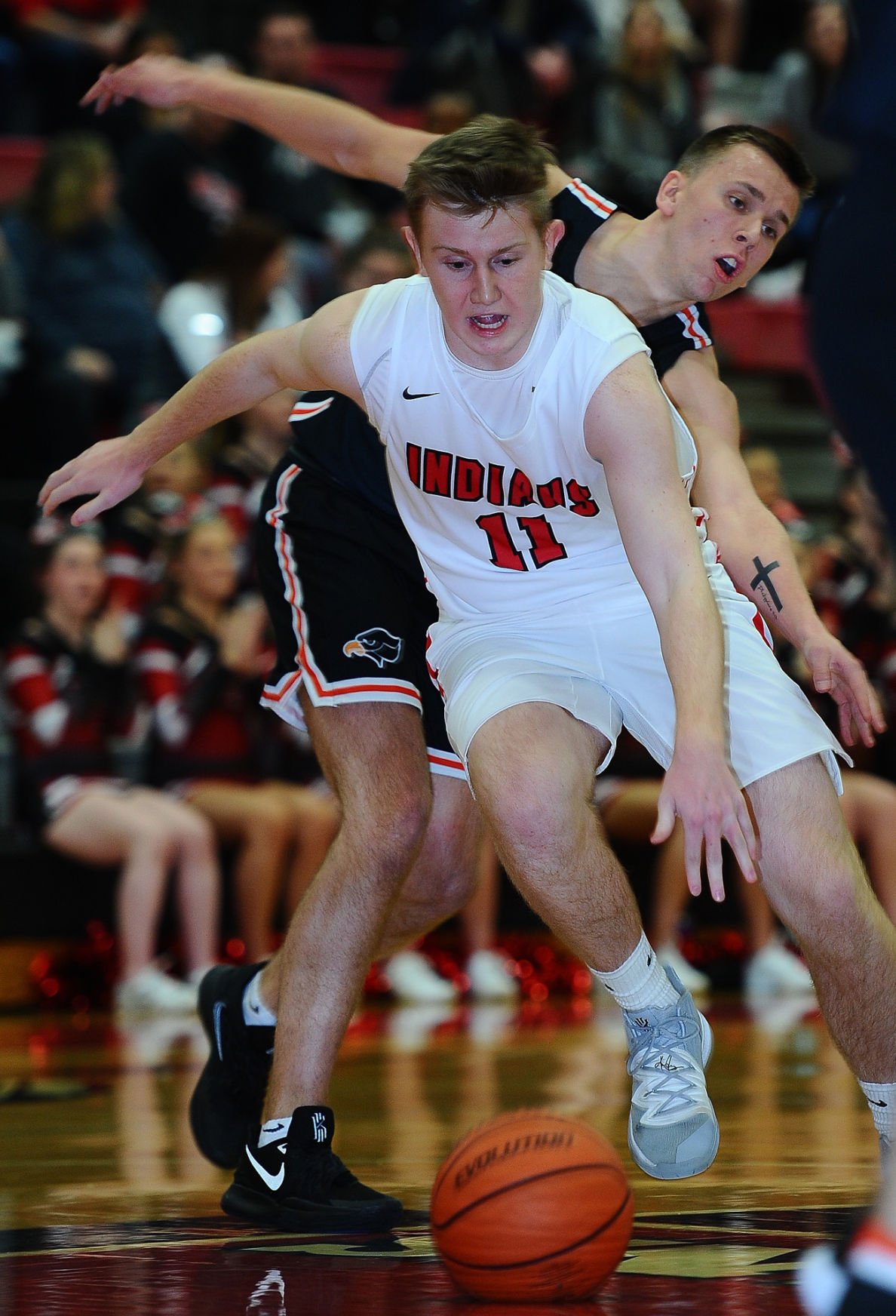 Bethel Park’s Ronald Zeiler attempts to steal the ball off Luke Fountaine (11) but he eludes the turnover by dribbling to the basket.

Peters Township’s Michael McDonnell soars through the air to the basket for two points Friday against Bethel Park.

Sam Petraca (14) drives into the teeth of the Bethel Park defense.

Bethel Park’s Ronald Zeiler attempts to steal the ball off Luke Fountaine (11) but he eludes the turnover by dribbling to the basket.

McMURRAY – It turned into a game of “Where’s Waldo?” Friday night.

Only Waldo wasn’t in his typical red and white striped shirt with a matching beanie. He was standing at a tall 6-4, sometimes the tallest player on the entire court, with a No. 15 in the middle of a black and orange Bethel Park basketball jersey.

The problem for Peters Township was that it couldn’t spot sophomore Dolan Waldo the entire night.

Coming off the bench to score 17 points, all in the first three quarters, Waldo led a balanced offensive effort and a strong second quarter as Bethel Park defeated Peters Township, 79-65, in a Class 6A Section 2 game.

“I got lost back there,” Waldo said. “They couldn’t find me. I just kept getting open and scoring.”

Waldo and his lanky frame fell through the cracks of the Indians’ newly installed press defense. Allowing Bethel Park (5-2, 11-6) to get into the middle of the court, crisp passing combined with slow defensive rotations from the Indians created a mismatch in the second quarter.

Leading by just one point after the first quarter, 18-17, Waldo scored nine of his points in a second quarter owned by Bethel Park. The Black Hawks went on an 8-2 run started by a layup from Waldo to begin the quarter. They then built a double-digit lead with an 11-point run in just under two minutes to eventually go into halftime up 43-28.

“This press is new for us,” said Peters Township assistant coach Ed Rafferty. “We just put it in this week so we are still learning the nuances of it. Really, the breakdowns started in the frontcourt when we allowed the pass to the middle. That forced us to rotate up and those rotations were a little slow.”

Rafferty was filling in for Indians head coach Gary Goga, who was ejected during Peters Township’s upset victory over Upper St. Clair earlier in the week and had to sit out the Bethel Park game.

The loss keeps Peters Township (3-4, 9-8) in the fourth and final playoff spot with three section games remaining. A win would have tied the two teams for third place behind first-place Mt. Lebanon and Upper St. Clair.

Waldo wasn’t the only player for Bethel Park to find offensive success. Tommy DiRienzo scored a game-high 20 points. Ryan Meis’ 13 points in the second half led to 19 for the night. Anthony Chiccitt chipped in with 14 in opportunities that were created by breaking the pressure defense, an area of trouble for the Black Hawks entering Friday.

“We have had to work on it a lot,” said Bethel Park coach Josh Bears. “We didn’t anticipate pressure being an issue for us coming into the season but teams have really hurt us with it. Over the last couple of days we’ve spent a lot of time trying to tighten that up.”

Waldo was moved into the Black Hawks’ senior-dominated lineup to help break the press, providing a tall target with a long wingspan. Bears kept him in after the fast start, despite Peters Township taking an 8-2 lead to begin the game.

“He was a difference-maker,” Bears saido. “He came up huge off the bench. He has the potential. We’ve been waiting on it. Sometimes it’s tough when you are a sophomore.”

Bethel Park’s lead grew to as much as 23 points in the third quarter. Eight fourth-quarter turnovers allowed Peters Township to cut the lead to as little as 12 points with just under three minutes left in regulation.

“All the stuff tonight is correctable,” Rafferty explained. “Us as coaches take responsibility. It’s our job to make sure the kids understand what we’re trying to do. For putting it in this week, I thought our kids did a wonderful job. There are just so many nuances. We started missing some shots and things broke down on defense and that was enough for them to get that big lead.”