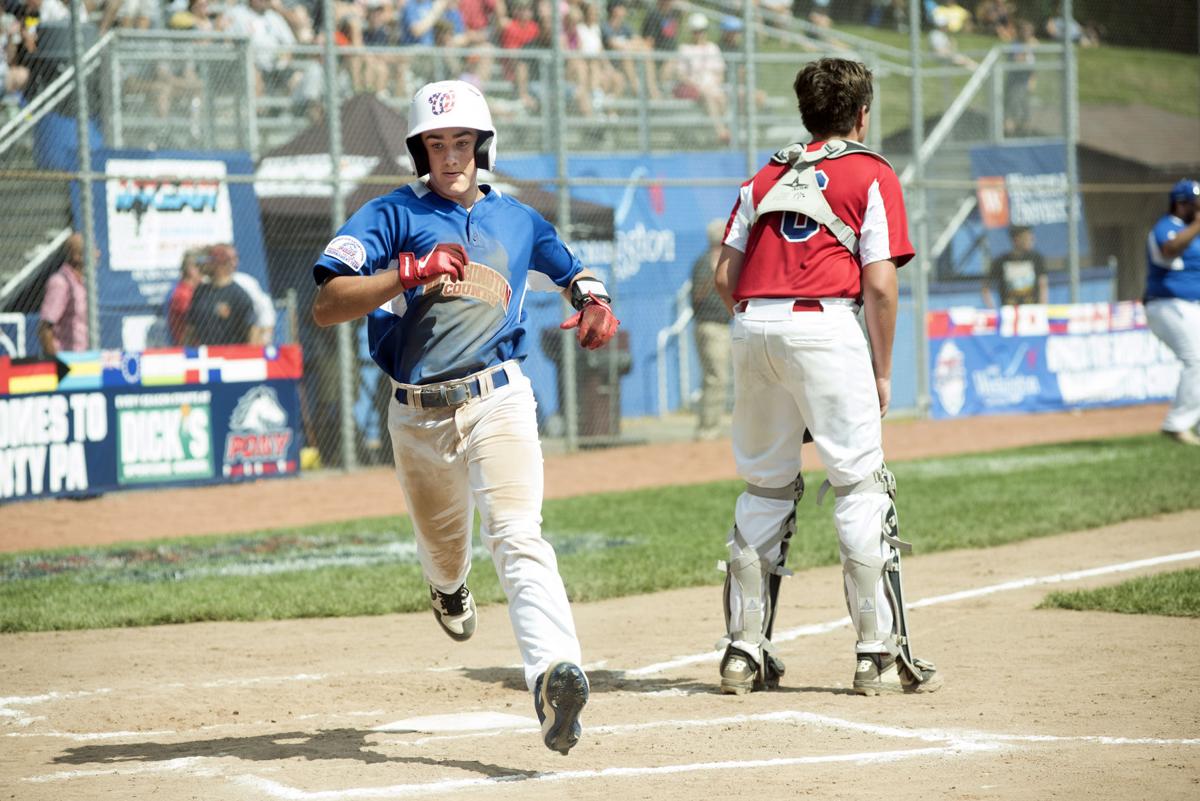 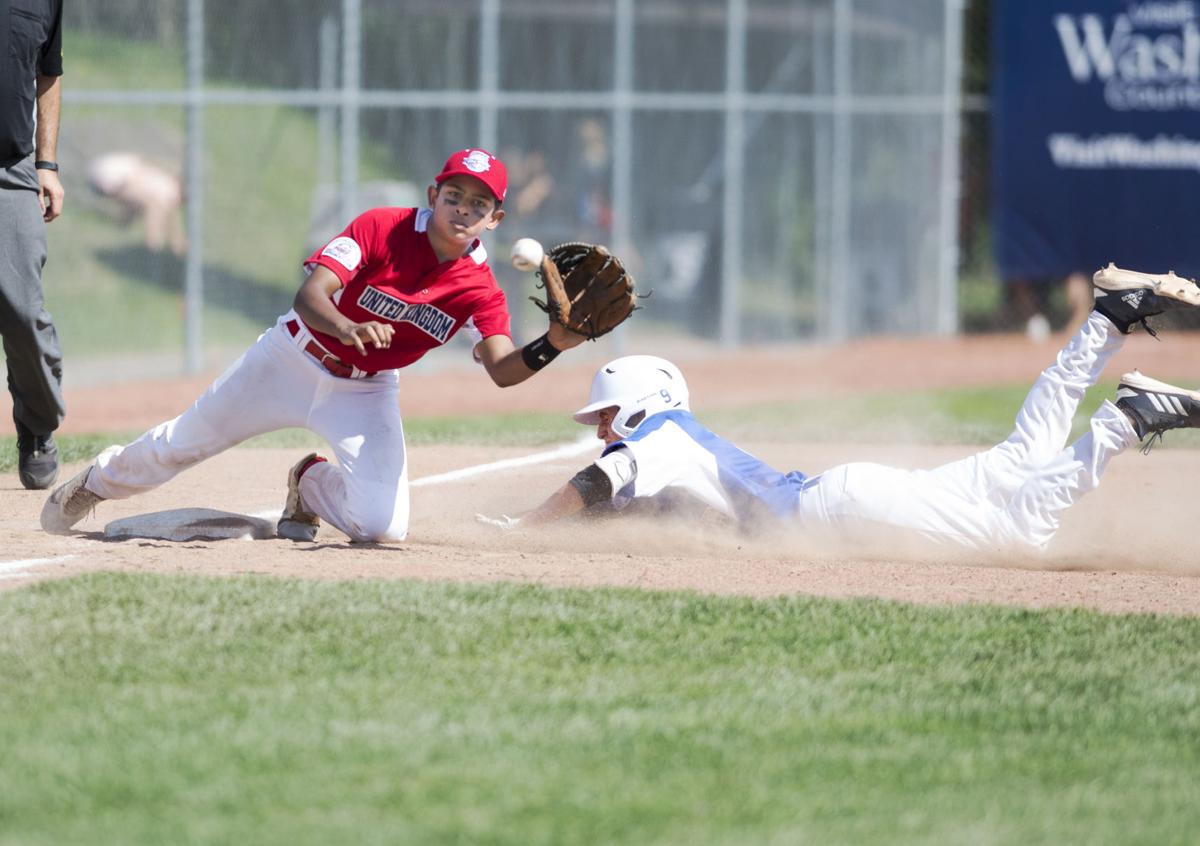 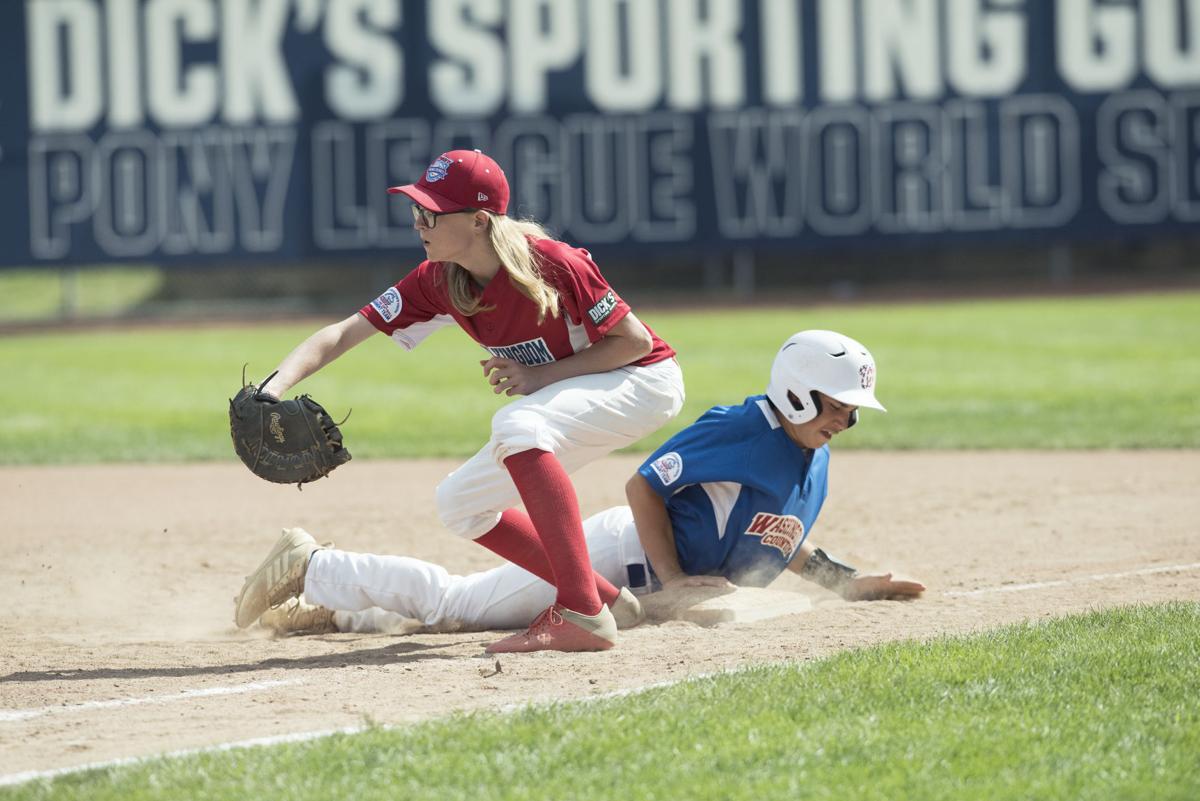 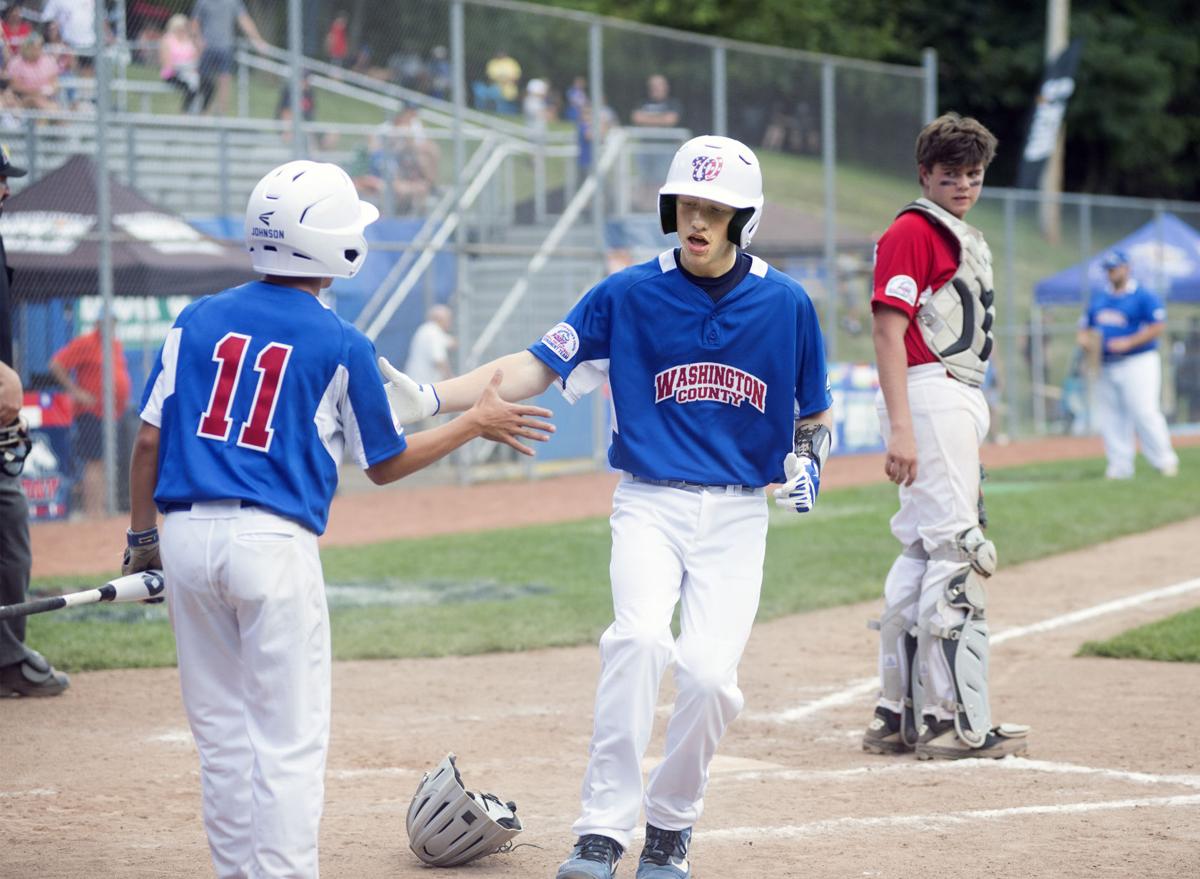 Washington County’s Matthew Smith,center, smack hands with Tyler Johnson after they both score against London in the Pony League World Series at Lew Hays pony field in Washington on Saturday, August 10, 2019.

Washington County’s Matthew Smith,center, smack hands with Tyler Johnson after they both score against London in the Pony League World Series at Lew Hays pony field in Washington on Saturday, August 10, 2019.

Playing London, United Kingdom, who had never played a world series game before Saturday, Miller was confident this could be a good opportunity for the offense to show what it could do.

However, what transpired at Lew Hays Pony Field certainly caught Miller off guard, but not in a bad way. Washington County blew its previous single-game World Series record of 17 runs out of the water in a 23-3 Mercy-Rule hammering of London.

The host team likely could have broke the record of runs in a single game from any team in Pony World Series history, which stands at 26, but the game ended after the fifth inning due to the Mercy Rule.

“I mean, yeah, I’d be lying if I said I wasn’t surprised,” Miller said. “But at the end of the day, double-digit (runs) was kind of what was expected. I think we’re going to score a lot of runs in every game. Twenty-three is obviously a ton.”

Leading the charge for Washington offensively were Mason Fixx and Calvin Daniels. Fixx, who was also Washington’s starting pitcher, went 3-for-4 with four RBI and scored four runs. Daniels went had hits in all four at-bats, scored three times and had seven RBI, one run short of tying a series’ record.

Fixx, the team’s primary catcher, doesn’t find himself on the mound for Washington. Miller decided to give him the ball Saturday because of his competitive nature. For Miller, it wasn’t what Fixx did at the plate, but rather on the mound, that was impressive.

“That’s his second pitching appearance for us all summer,” Miller said. “He came out of the bullpen one time prior and that was it. Hee competed well. He’s a stud, I don’t know how else to put it.”

In the first inning, he walked two batters, including one with the bases loaded, and hit another. With Washington up 2-1. Fixx got Andrew Painter to fly out to left field with the bases loaded to end the threat. Fixx then settled down. He retired the side in order on just five pitches in the second inning.

“Just get it done,” Fixx said. “It’s exciting. Not much you can say about it. We took the win. That’s all you can say.”

While Fixx might not have been used to the success on the mound, it was business as usual at the plate for Daniels.

Since about as long as he can remember, the Pony League World Series has been a part of Daniels’ life. One of his favorite memories of the series was sitting up on the hill in right field as an 8-year-old and talking with members of a team from Japan.

Daniels was the one to put on a show for fans Saturday.

“That’s probably one of the best games I’ve probably ever played,” an ecstatic Daniels said. “Going 4-for-4 is amazing. I had one heck of a game. It’s just fun to be here, playing with teammates and just having a good time.”

Fixx continued the scoring onslaught from Washington with a two-run double to make it 4-1. The hosts then added three more runs after Fixx’s double in the second, five runs in the third, four in the fourth and seven in the fifth to complete a historic afternoon.

“It’s nice to be back in the United States,” Ferlazzo said. “Watching on television, watching videos of this from years past, it’s nice to just actually be part of it. We’re all happy to be part of it. It’s an experience these kids will remember. They might remember this game a little longer, but other than that it is pretty enjoyable.”

Washington will enjoy the little time it has to celebrate before having to face well-rested Simi Valley, which will be playing in its first game after having a first-round bye.

“I’m truly happy for our guys,” Miller said. “We’ve worked really hard. A lot of them have looked forward to this game for literally a decade. Washington County hasn’t been super successful in the past. So to come out and get a win, and not only a win but an eye-opening win, I’m just very very happy for our guys. They’ve worked hard. Every kid got in the field and every kid played. I could not have asked for a better first game.”