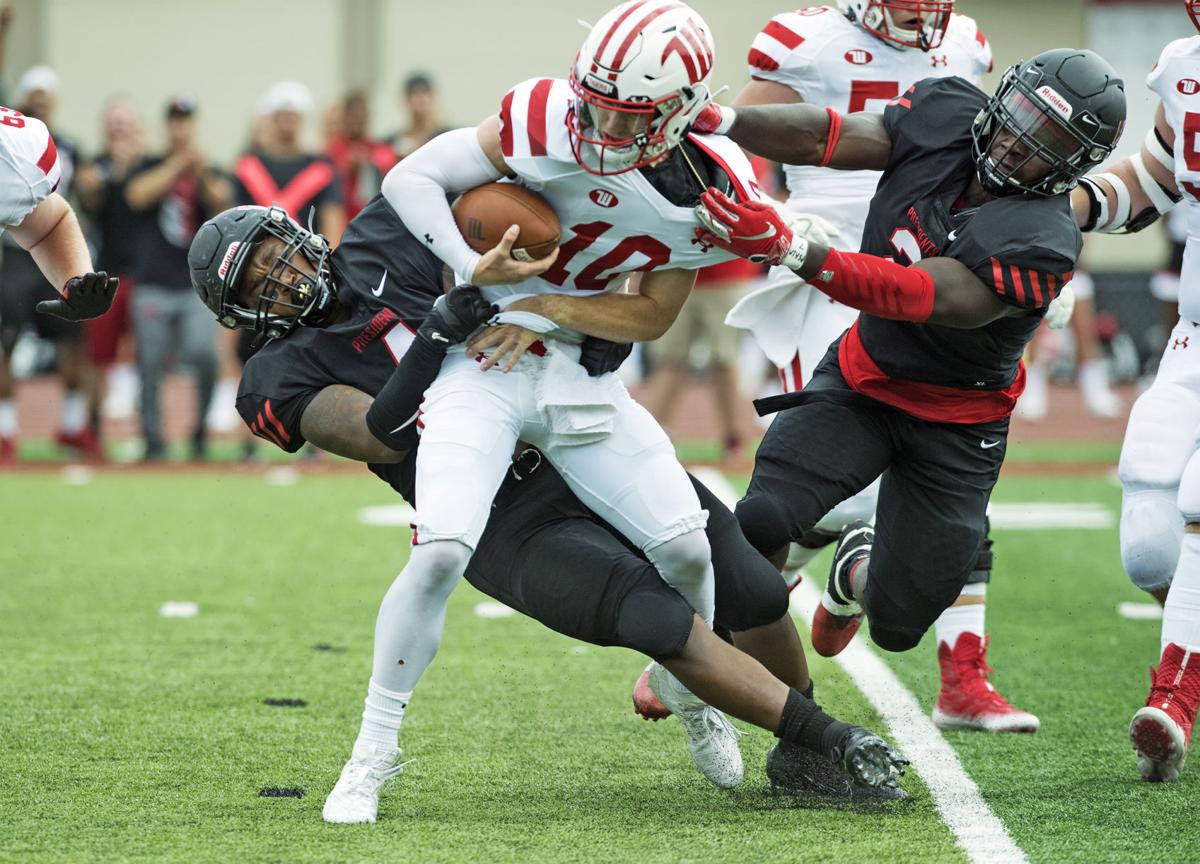 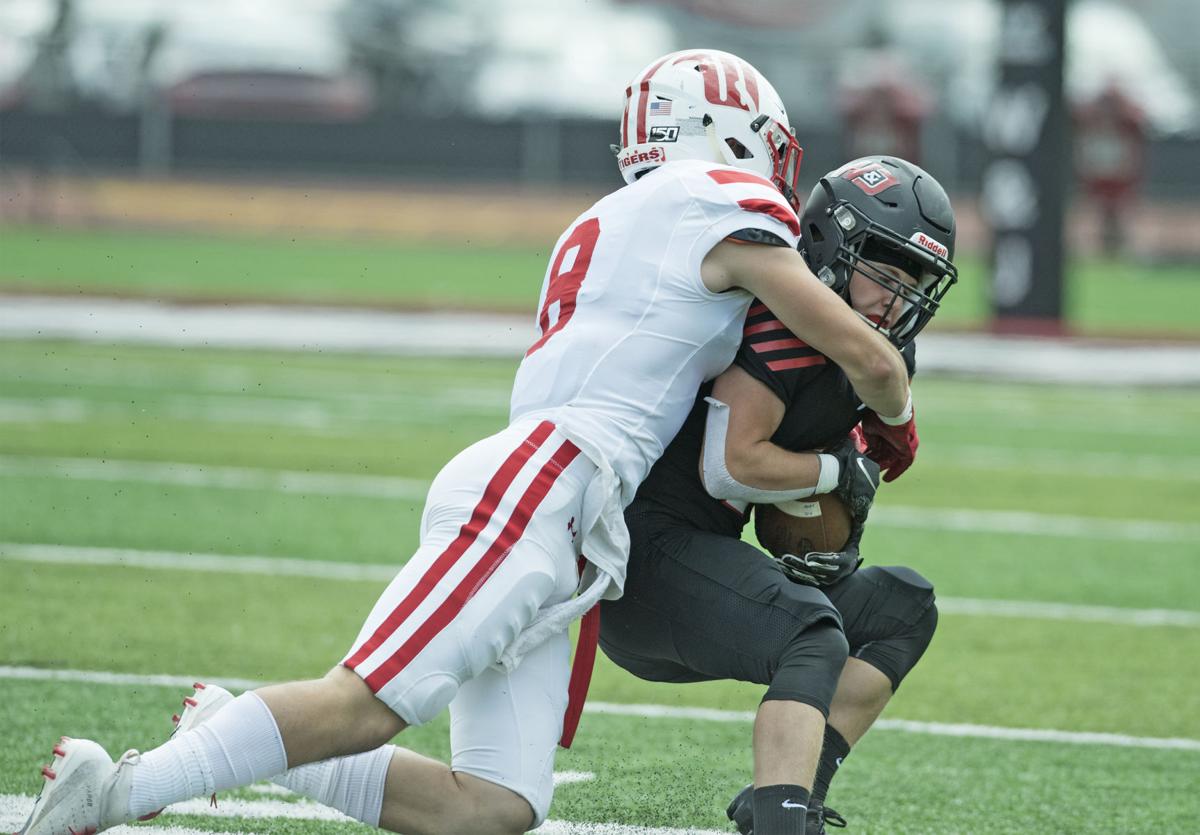 Washington & Jefferson’s Payton Skalos gets tackled by Wittenberg’s Liam Wooldridge during a game at Cameron Stadium on Saturday, Sep. 7, 2019. 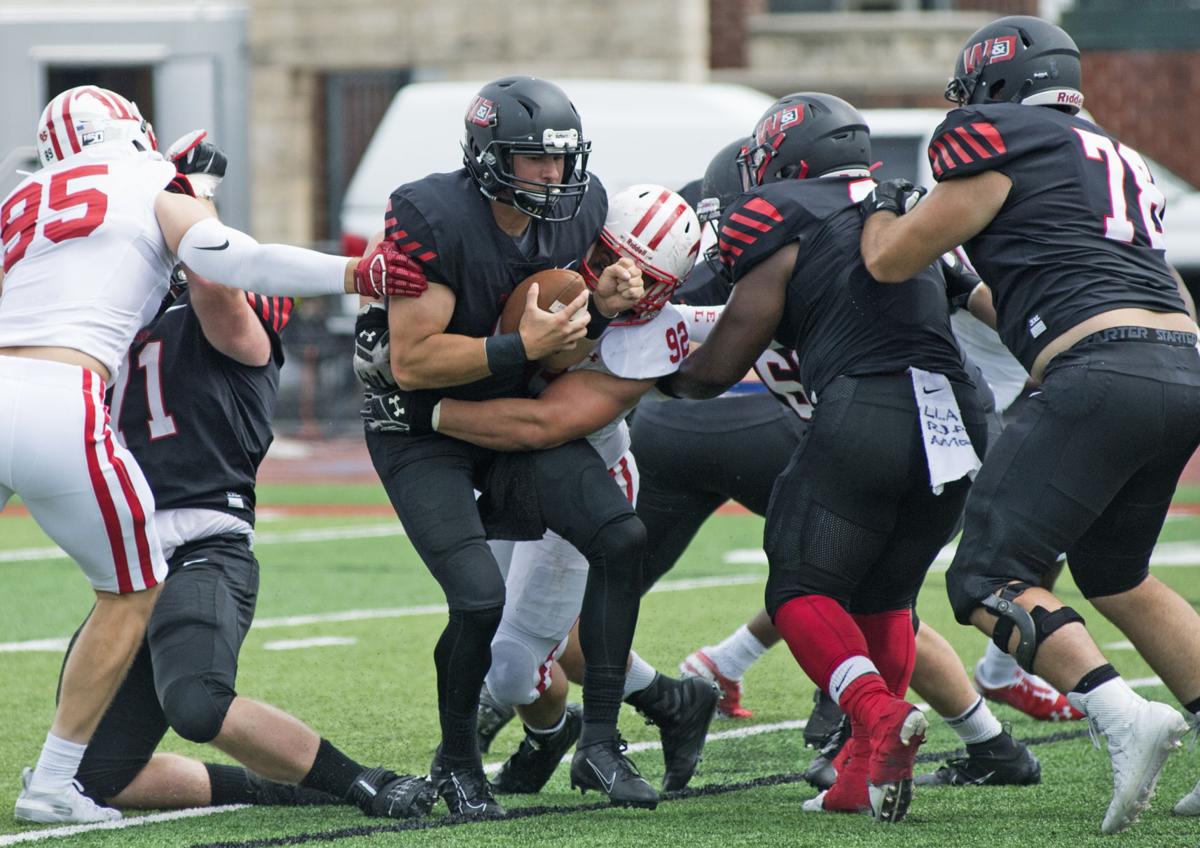 Washington & Jefferson’s Jacob Adams gets tackled by Wittenberg’s Trevor Good during a game at Cameron Stadium. 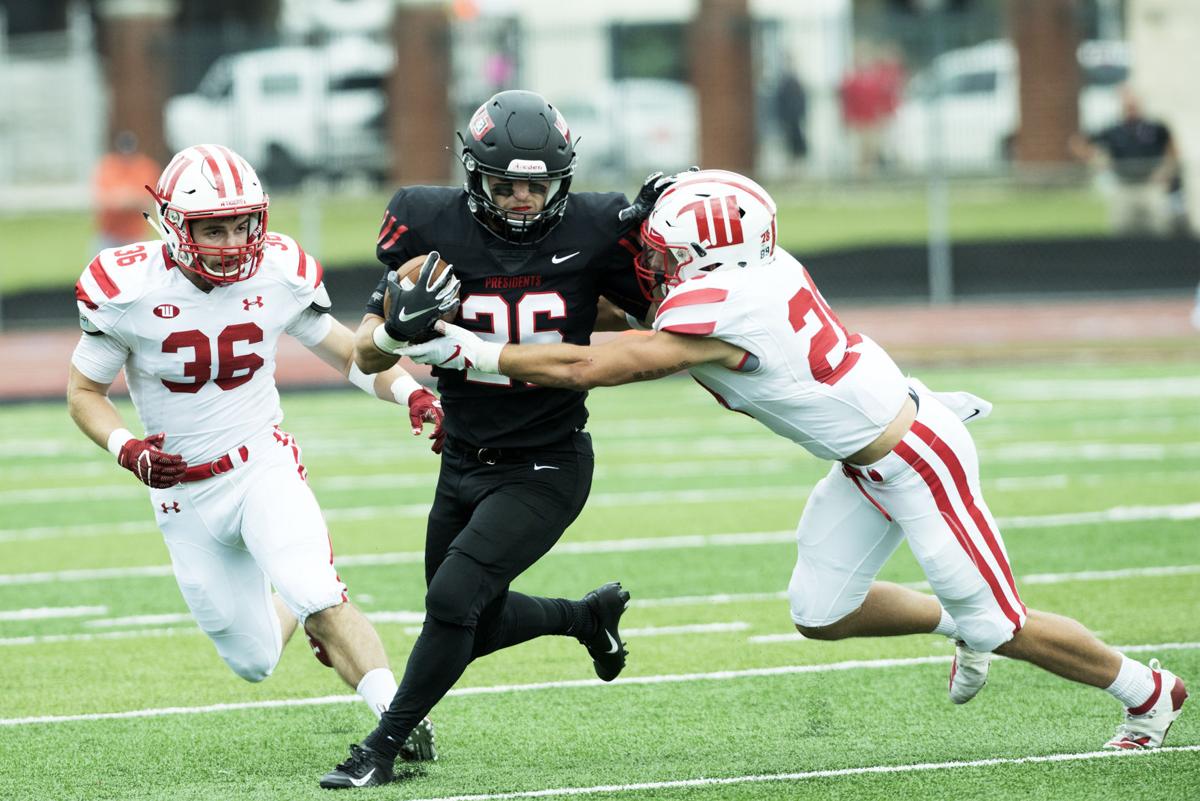 Washington & Jefferson’s Jordan West against Wittenberg’s Jordan Burkey,right, and Thomas Scholl during a game at Cameron Stadium on Saturday, Sep. 7, 2019.

Washington & Jefferson’s Payton Skalos gets tackled by Wittenberg’s Liam Wooldridge during a game at Cameron Stadium on Saturday, Sep. 7, 2019.

Washington & Jefferson’s Jacob Adams gets tackled by Wittenberg’s Trevor Good during a game at Cameron Stadium.

Washington & Jefferson’s Jordan West against Wittenberg’s Jordan Burkey,right, and Thomas Scholl during a game at Cameron Stadium on Saturday, Sep. 7, 2019.

If it were a television series rather than a football game, it would be in danger of being cancelled.

The television cameras caught all the underwhelming offensive details of Saturday afternoon’s season opener between Wittenberg and Washington & Jefferson at Cameron Stadium.

At least there was a dramatic ending, thanks to linebacker Nick Getz scooping up a fumble and returning it 52 yards to ice a 16-8 victory by W&J over the Tigers.

The game was televised by WPNT and also streamed by ESPN3. It was the first national broadcast for W&J since the Presidents played in the 1994 Stagg Bowl.

This one wasn’t pretty.

But an ugly win is better than a pretty loss.

“That’s a great defense,” said W&J head coach Mike Sirianni of Wittenberg. “We knew that going in. We couldn’t do anything. That’s partly inexperience up front, which I knew was going to be an issue. That’s partly with our new receivers. That’s partly we didn’t play very well, and that was due to them.”

Getz’s return of one of three Wittenberg lost fumbles was made possible by nose tackle Mike Williams, whose crushing hit on quarterback Blake King dislodged the football. It bounced to Getz, who had nothing but turf in front of him. Getz’s TD with 9:53 to play turned a 10-8 lead into an 8-point bulge after the missed extra point.

“I saw Mike come through and hit (King),” said Getz. “It bounced right to me. It wasn’t a me play. It was an all-around D play. I haven’t had a return on defense since high school or junior high. I love all those guys on offense. This is something we can build on and get better.”

Quarterback Jacob Adams had his worst day as a starter, completing just 12 of 30 passes for 91 yards and tossed three interceptions.

“Hat’s off to their defense. We knew they were going to be very good,” said Adams. “They were big and they were fast and it was really hard to get things going.”

Free safety Tyler Sabo made a game-saving breakup of a King pass to the left front part of the goal line with just under 4:00 to play and intercepted King with 1:40 to play to ice the game.

“As soon as he snapped the ball, I made a move on it,” Sabo said of the knock-away. “I got my hands on it but Joey (Koroly) crashed into me.”

There was no sugar-coating the first half.

Wittenberg led, 8-7, in 30 minutes filled with fumbles, interceptions and penalties.

And it seemed an alien being took over Adams’ body. He completed 6 of 15 passes for 65 yard. He threw three interceptions and had a fourth negated by a Wittenberg penalty.

W&J’s running game produced minus-23 yards. But 26 of those lost yards came on a bad snap to punter Jacob Sarver, who chased the ball down before running out of the back of the end zone for a safety to cut W&J’s lead to 7-2 with 5:09 left in the first quarter.

W&J took the lead on a 21-yard pass from Adams to Josh Burns with 8:38 left in the first quarter.

It took Wittenberg a quarter and a half to get its initial first down of the game. Wittenberg would miss two field goals and an extra-point attempt before the break.

“We made a lot of mistakes,” said Wittenberg head coach Joe Fincham. “That’s a good team over there.”

The Tigers took the lead on an unusual set of circumstance midway through the second quarter. Adams took a hit on a pass play and lost his helmet. NCAA rules required him to come out for a play. He did and Justin Heacock came in and was intercepted. King then found Thad Snodgrass on a perfect 35-yard post pattern to make it a one-point game, 8-7.