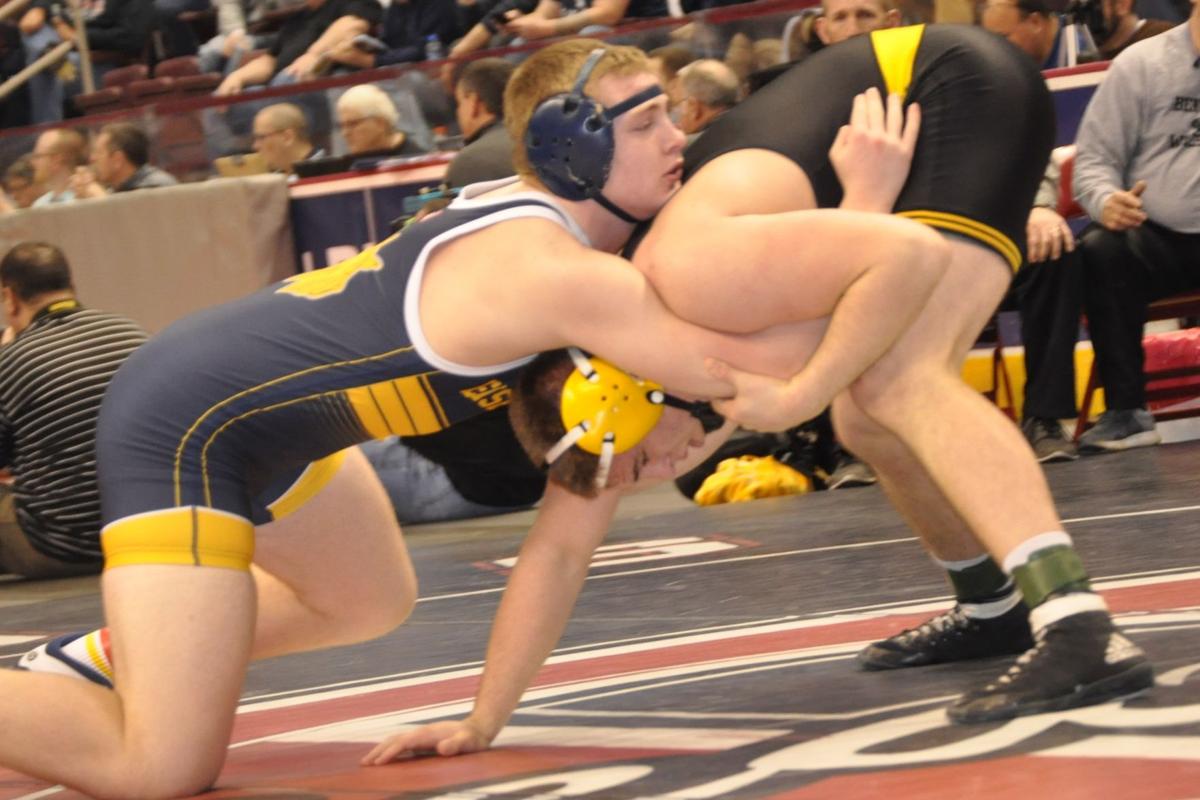 Jon Vargo of Bentworth, right, tangles with Cael Black of Eisenhower in the first round of the PIAA Class AA Wrestling Championships Thursday at the Giant Center in Hershey.Vargo won 3-2. 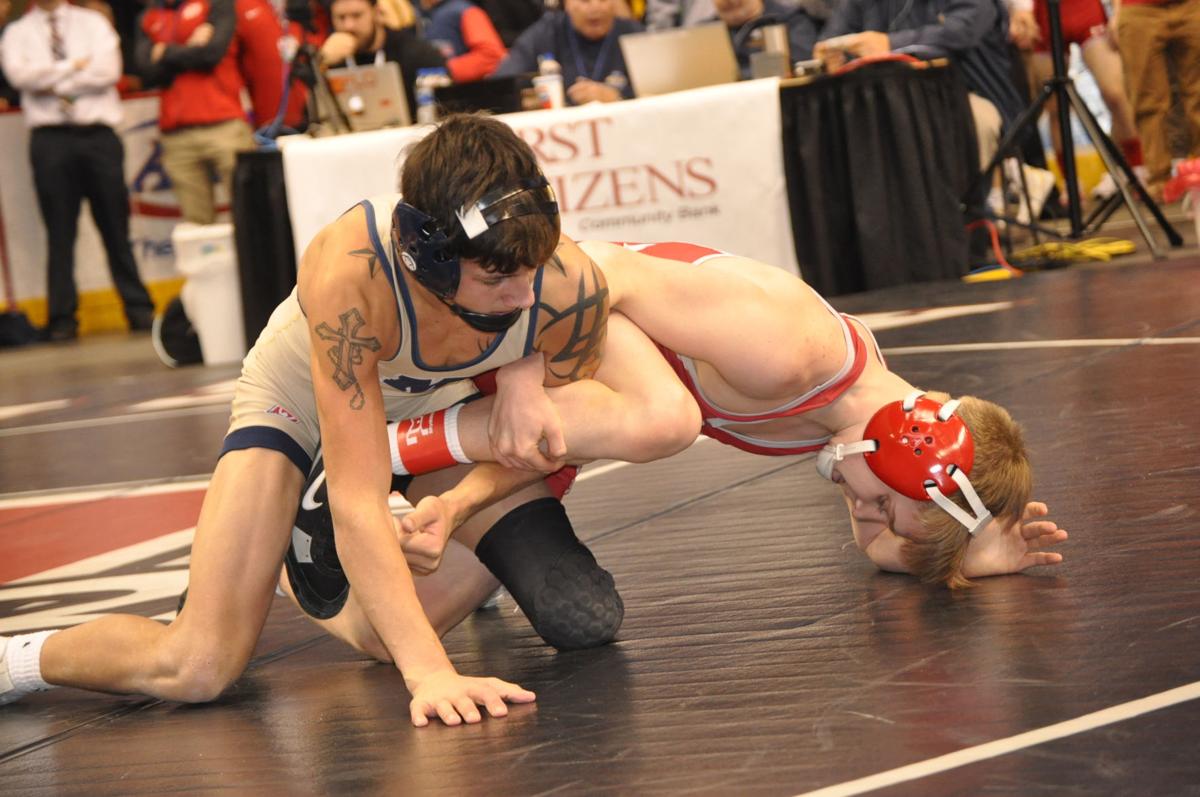 McGuffey’s Nate Yagle, left, is looking to improve on his past performances in the PIAA Class AA Wrestling Championships at the Giant Center in Hershey. 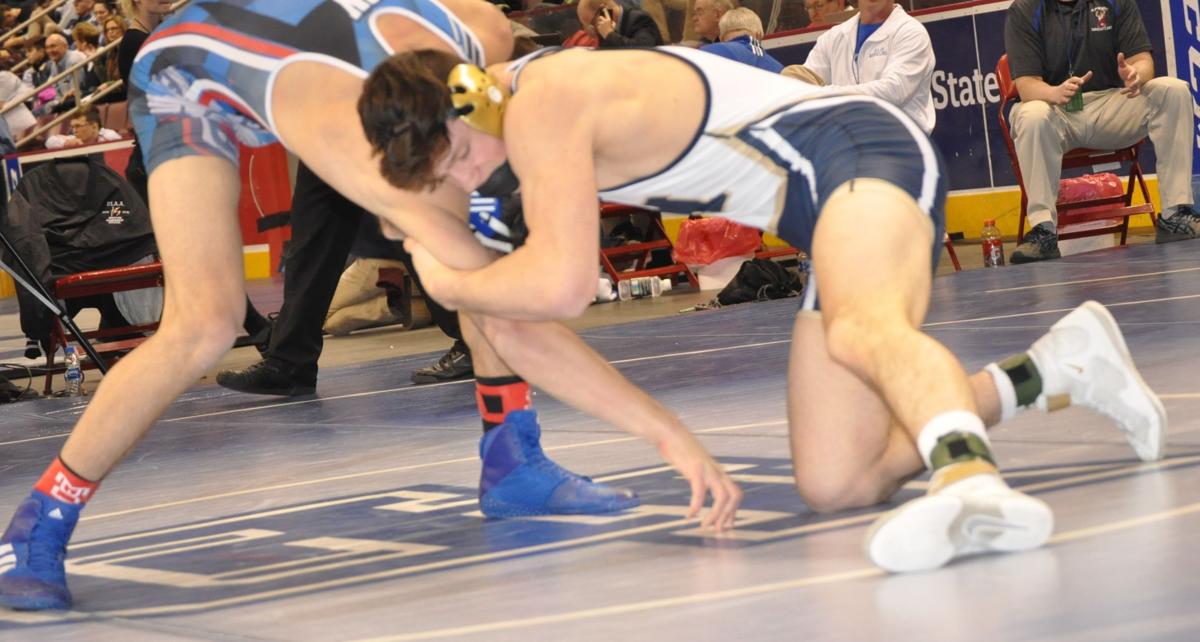 Christian Clutter, right, of McGuffey controls Cam Whisner of Kane during the first round of the PIAA Class AA Wrestling Championship Thursday at the Giant Center in Hershey. Clutter won by fall in 3:33.

Jon Vargo of Bentworth, right, tangles with Cael Black of Eisenhower in the first round of the PIAA Class AA Wrestling Championships Thursday at the Giant Center in Hershey.Vargo won 3-2.

McGuffey’s Nate Yagle, left, is looking to improve on his past performances in the PIAA Class AA Wrestling Championships at the Giant Center in Hershey.

Christian Clutter, right, of McGuffey controls Cam Whisner of Kane during the first round of the PIAA Class AA Wrestling Championship Thursday at the Giant Center in Hershey. Clutter won by fall in 3:33.

HERSHEY – In the final, and toughest, wrestling tournament of the season, wrestlers have to handle not just what they see but what the referee sees.

Good wrestlers know how to move enough to look busy when they are actually doing very little to score.

Such was the case Jonathan Vargo was dealing with in the first round of the PIAA Class AA Wrestling Championships.

Vargo, a senior from Bentworth, was the clear aggressor in his first-round bout against Cael Black, a freshman from Eisenhower.

Yet, it was Vargo who was hit with a stalling warning in the third period while holding a 3-2 lead at 195 pounds.

Vargo simply switched to a higher gear and made the one-point lead stand Thursday at the Giant Center in Hershey.

Vargo was one of only two local wrestlers to advance to today’s quarterfinals at 9 a.m. Semifinals are at 7:30 p.m. tonight and finals are 2 p.m. Saturday.

McGuffey’s Christian Clutter advanced to the quarterfinals with a pin in 3:33 of Cameron Whisner of Kane at 170 pounds. Clutter, a Southwest Region runner-up, wrestles David Galasso of Athens today. Galasso is a Northeast Region champion and the fourth seed in the weight class with a 34-4 record.

Vargo, a fifth-place finisher in the Southwest Region with a 28-6 record, takes on Dane Csencsits, a junior from Saucon Valley with a 29-7 record. Csencsits is a Southeast Region runner-up.

“I try not to leave it in the ref’s hands,” said Vargo. “You have to go out and wrestle. Mat awareness and match awareness is important.”

Vargo got a critical first takedown just 52 seconds into the bout and nearly turned Black for backpoints.

“I thought I was going to get backpoints,” said Vargo. “As long as you get the first (takedown), then you’ll probably will win the match.”

Black escaped near the end of the first period and again to start the second to tie it up. Vargo escaped to start the third period then was hit with the stalling call with 35 seconds to go.

“We know he has the gas tank to wrestle those kind of matches,” said Bentworth coach Mike Shrader. “Sometimes it’s frustrating when you put in a lot of work and you’re not getting much from the other guy. As long as you get the win, that’s all that matters.”

“Jon wrestled well,” said Shrader. “But he can absolutely turn it up.”

Vargo opened the tournament with a 10-3 decision over Clay Green of Towanda in the preliminary round. The bout outcome was announced as a forfeit by the tournament PA announcer, which drew some chuckles from the Bentworth faithful.

Clutter followed his mother’s advice for the first round and chalked up an easy victory over Whisner.

“My mother tells me to stay cool and be calm,” said Clutter. “I listen to her. Mom knows best.”

Clutter got a takedown at 1:39 and extended the lead to 5-0 before the pin.

“The pin is just the round of 16,” said Clutter, who raised his record to 41-3. “There still is a long way to go. It feels good to move through the tournament.”

McGuffey’s Nate Yagle scored the final four bout points to take a 6-5 decision from Jace Beegle of Pequea Valley in the 113-pound preliminary round.

Yagle dropped an 8-0 decision to Gabe Strickland of Benton in the first round and faces Conner Pierce of Harborcreek in the second round of consolations.

Beth-Center’s Jimmy Gwyer opened with a 3-2 decision over Brandon Breidegan of Northen Lebanon in the 120-pound prelims before losing by 17-2 technical fall to fourth seed Ryan Crookham of Notre Dame Green Pond.

Gwyer wrestles Bailey Gimbor of Harrisburg next in the consolations.

Burgettstown’s Shane Kemper pinned Chris Whiteman of Lehighton before getting pinned by fourth-seeded Gavin Garci of Southern Columbia at 145 pounds. Next up is Wes Davenport of Conneaut.

Kemper’s brother, Riley, won by decision over Owen Zechman of Midd-West, 8-1, but lost to second-seeded Colby Whitehall of Brookville in 1:46 at heavyweight. Emmanuel Lawal of Church Farm School is next.

Washington’s Gerald Comedy won a 3-2 decision over Derek Hunter of Jim Thorpe then fell to Ryan Weitz of North Schukill, 2-1. Comedy’s next opponent is Max Wills of Greenville.