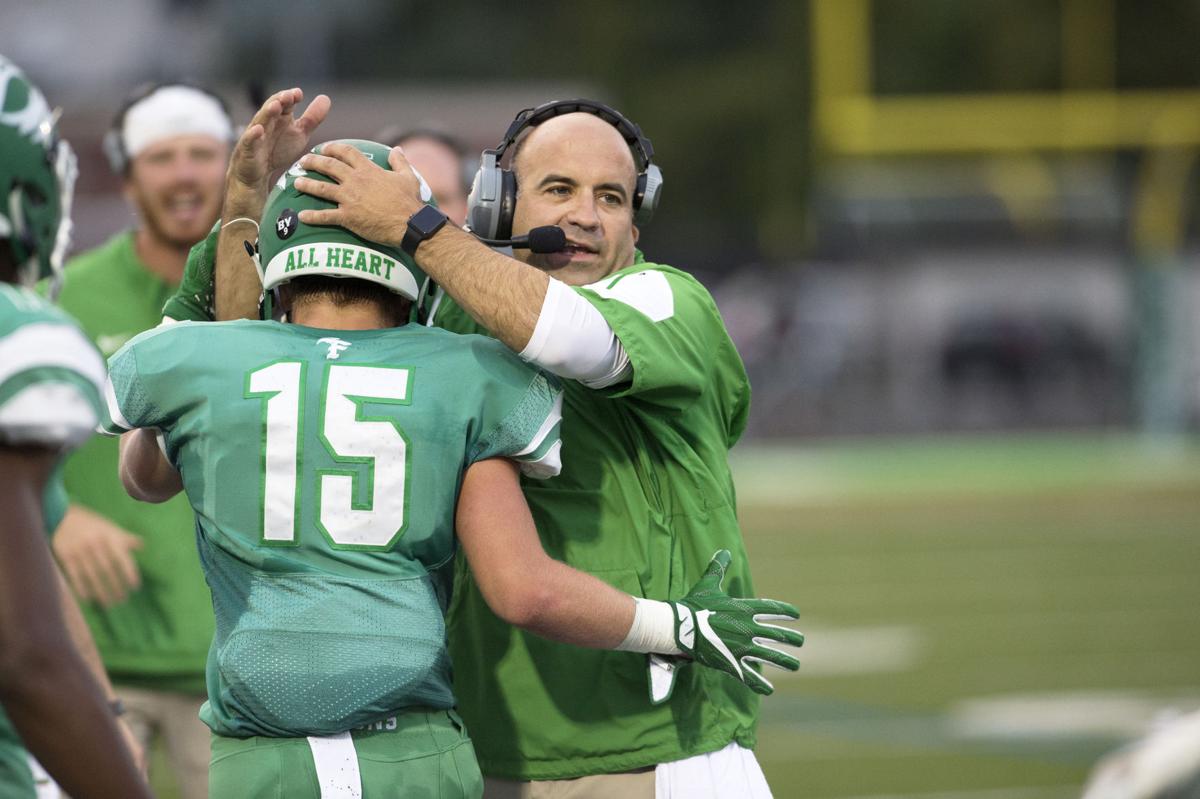 South Fayette coach Joe Rossi congratulates Joey Audia during a game this past season. Audia is one of several soon-to-be senior Lions hoping for an opportunity to play in college. 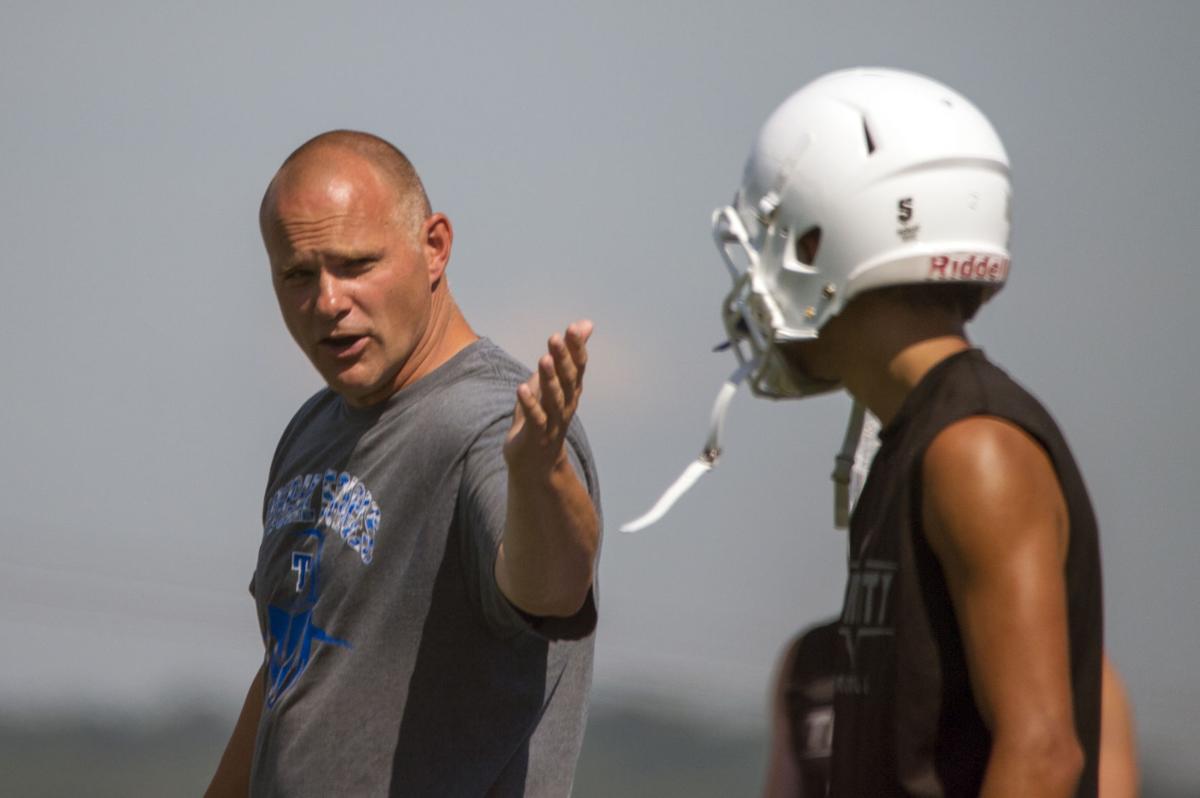 Head coach Jon Miller has taken to social media during the pandemic to help his players attract the attention of college coaches. 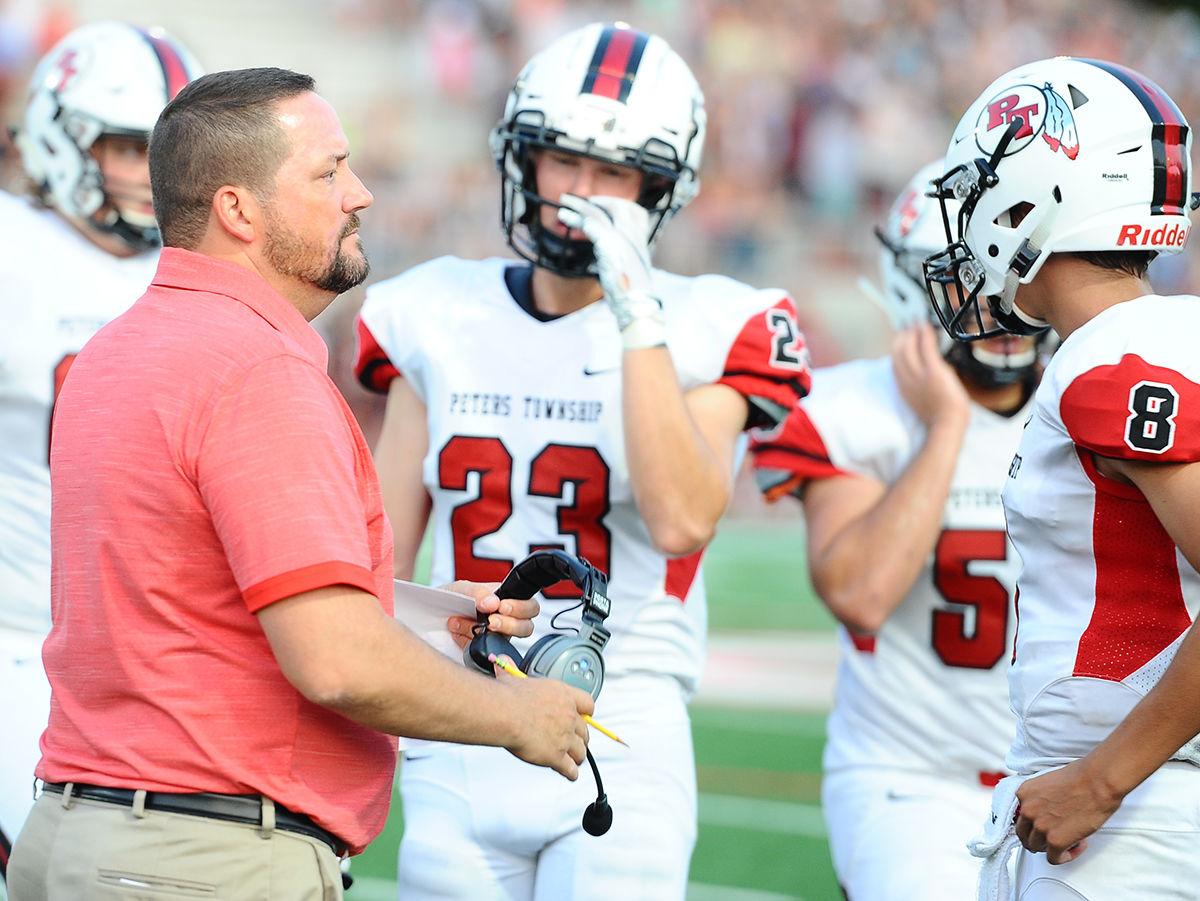 Peters Township head coach T.J. Plack has been trying to get his players noticed without the benefit of summer camps.

South Fayette coach Joe Rossi congratulates Joey Audia during a game this past season. Audia is one of several soon-to-be senior Lions hoping for an opportunity to play in college.

Head coach Jon Miller has taken to social media during the pandemic to help his players attract the attention of college coaches.

Peters Township head coach T.J. Plack has been trying to get his players noticed without the benefit of summer camps.

Rossi, who has been the South Fayette football coach since 2007, has seen his fair share of players come through that have relied on recruiting camps to catch college coaches’ attention.

“Guys who went to camps and made a name for themselves,” Rossi said. “They perform against guys so well that they break a stigma. Kids that maybe don’t have enough highlights or are a couple inches short. Justin Watson had one offer, from Bucknell, going into the summer (prior to his senior year). Some have no offers and leave with an offer. Hunter Hayes went out to Penn. Dom Thomas got offers from Duquesne and Robert Morris last year after he left their camps.”

Many, if not all, of those camps won’t be held this year because of the coronavirus pandemic. The closing of high schools within the state for the remainder of the academic year also eliminated any opportunity for face-to-face interactions.

Now, area high school coaches and players are relying on the two T’s in recruiting: tape and Twitter. High school coaches have turned to social media more than ever in an effort to help get their players future opportunities.

“It’s where we are at,” Rossi said. “It’s different as a high school coach right now. You have to take it and run with it. I’ve been more active sending out emails and the profiles we’ve done on Twitter. You turn to Twitter as our source of giving that information, as if those college coaches were coming into our school.”

Rossi started a trend with several coaches of posting information about players, including position, height, weight, summaries, grade-point averages and contact information to help the process.

It’s an idea that has gained steamed with his peers, including Trinity football coach Jon Miller.

“The first thing I did was reach out to college coaches via email,” Miller said. “I’ve contacted about 50. I followed Joe’s lead on the Twitter idea. I sent him a text telling him how great of an idea it was.”

Others, like Peters Township’s T.J. Plack, have added much more information to his yearly prospect sheets he creates and sends to colleges.

“The No. 1 difference is college coaches not being able to walk through our door and meet,” Plack said, “and the opportunity where I can pull a kid from class and he has can learn about a school right then and there. They are reaching out in different ways. They are finding other ways to try and deliver that information.”

Plack agrees not having camps throughout summer hurts the process, especially for players who are not Division I blue-chip recruits.

“That’s definitely a difference, and I see it with players who don’t even have offers,” Plack said. “We’ve had kids in the past who have been noticed by a couple places, from a camp, by catching a coach’s eye. They are missing out.”

Plack has several undersized linemen entering their senior years and some players who do not have much junior tape because of injuries. Those are the kind of players who need to be seen by college coaches.

In recent years, a trend has started on Twitter of high school players posting their college offers. It has swept across the nation in several sports. Athletes are posting offers and commitment announcements from any level – Division I, II, and III, NAIA and junior college.

Even prior to the pandemic, players who were trying to get recruited would post their highlight films in an attempt to spark interest. These days, athletes are filming themselves doing workouts, drills and other things to get noticed.

Rossi recorded and timed his son, Charley, running a 4.53-second 40-yard dash. Charley Rossi, who recently received his first Division I offer, from Sacred Heart, is one of many players at South Fayette seeking an opportunity at the collegiate level.

“We have a lot of recruitable kids,” Joe Rossi said. “This year more than ever they should film themselves working out. Twitter is filled with guys putting stuff out there. I’m only doing half of what it takes. The other half is on the kids. I think recruiting is a two-part process. It’s the kids and the coaches.”

According to Miller, college coaches having time these days to fully invest in watching a player’s game tapes could help open doors, rather than a coach watching only a few highlights and relying on measureables such as size and 40-yard dash times.

“It’s super important to put a good film together,” Miller said. “Sometimes college coaches rely too much on that testing portion. If you can jump through the roof and run super fast but can’t play, then it doesn’t matter.”

Before the pandemic, Rossi was planning to use an idea of former South Fayette graduate Marques Parks, who is an assistant coach at Westerville South High School near Columbus, Ohio. Rossi had certain days planned when South Fayette, Peters Township and Upper St. Clair would stagger the times of their after-school workouts to allow college coaches to be able to attend all three in one day. The neighboring schools each have a bunch of college-level players, and because of the football realignment will play in the same Class 5A conference this season.

“You hope and pray there is a football season,” Rossi said.