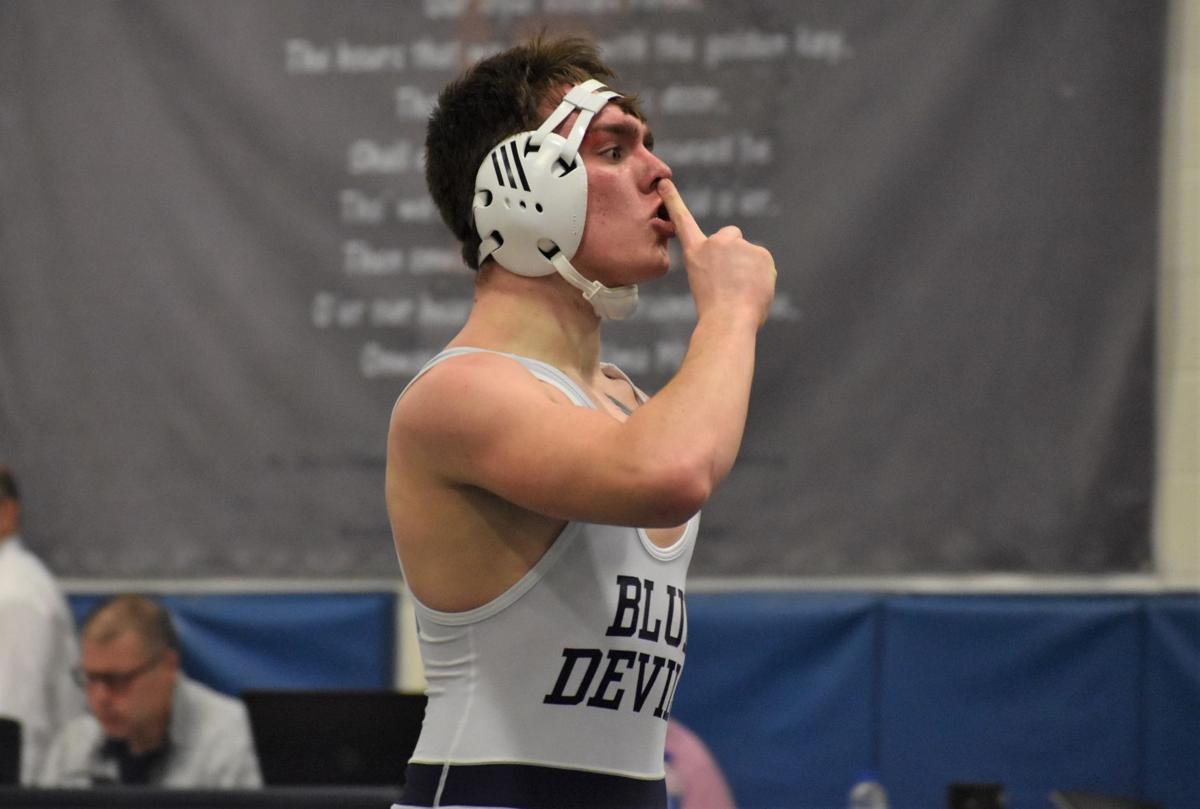 Burgettstown’s Turner Lehman puts his finger up to his mouth to shush the McGuffey crowd after a second-period pin in the Class AA Section 1 team wrestling championship Wednesday night. 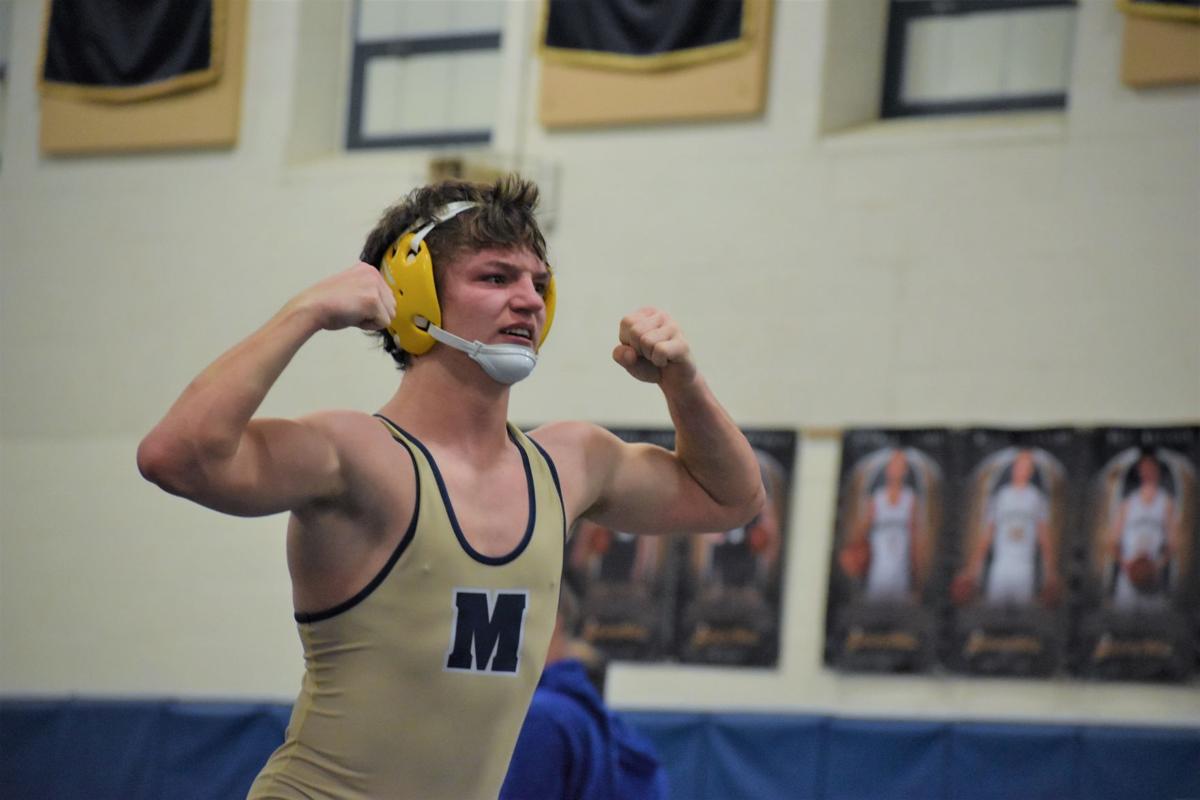 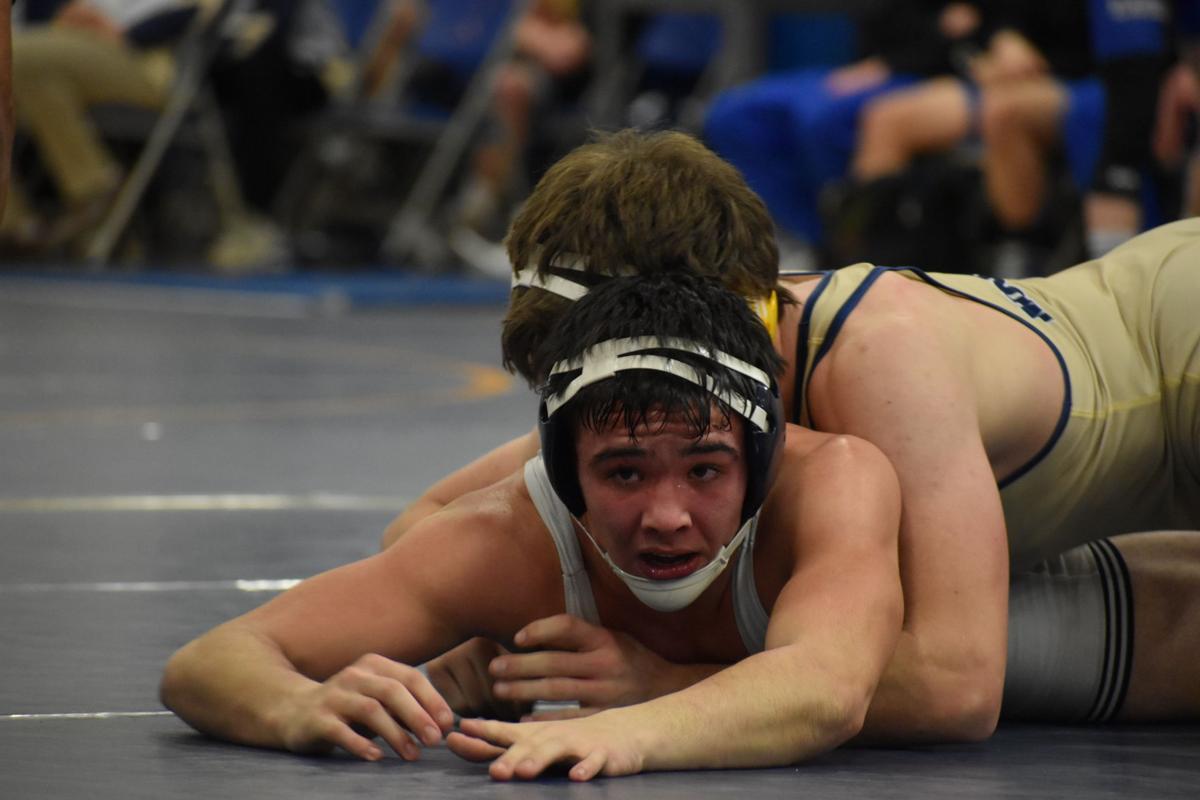 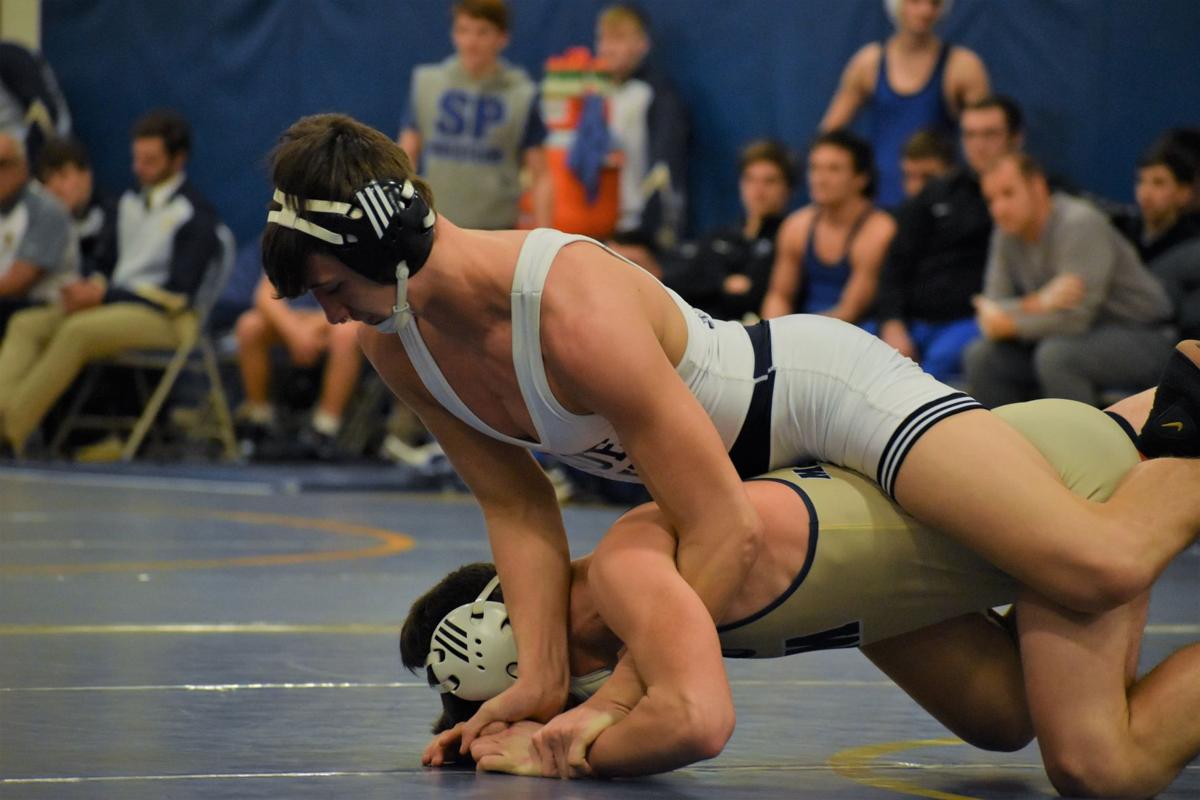 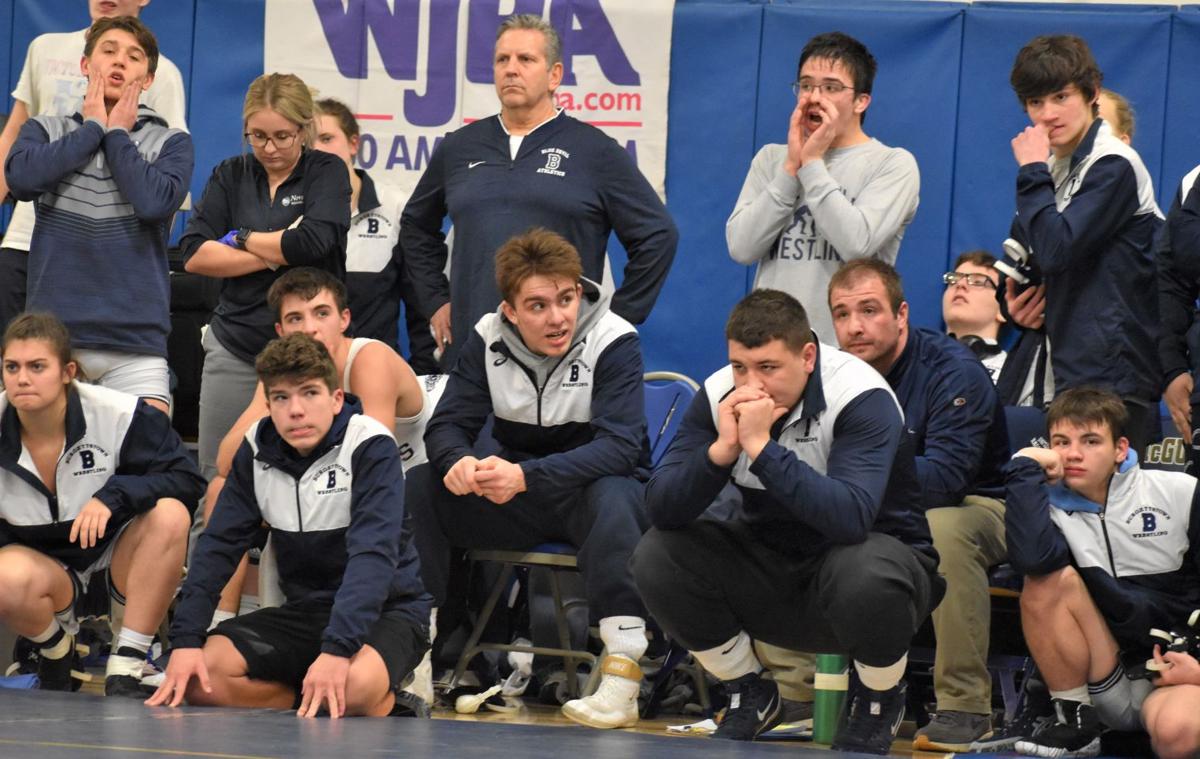 Members of the Burgettstown wrestling team watch with angst during one of the final bouts in the Class AA Section 1 team tournament at McGuffey High School. The Blue Devils will make their first trip in program history to Hershey for the state team tournament. 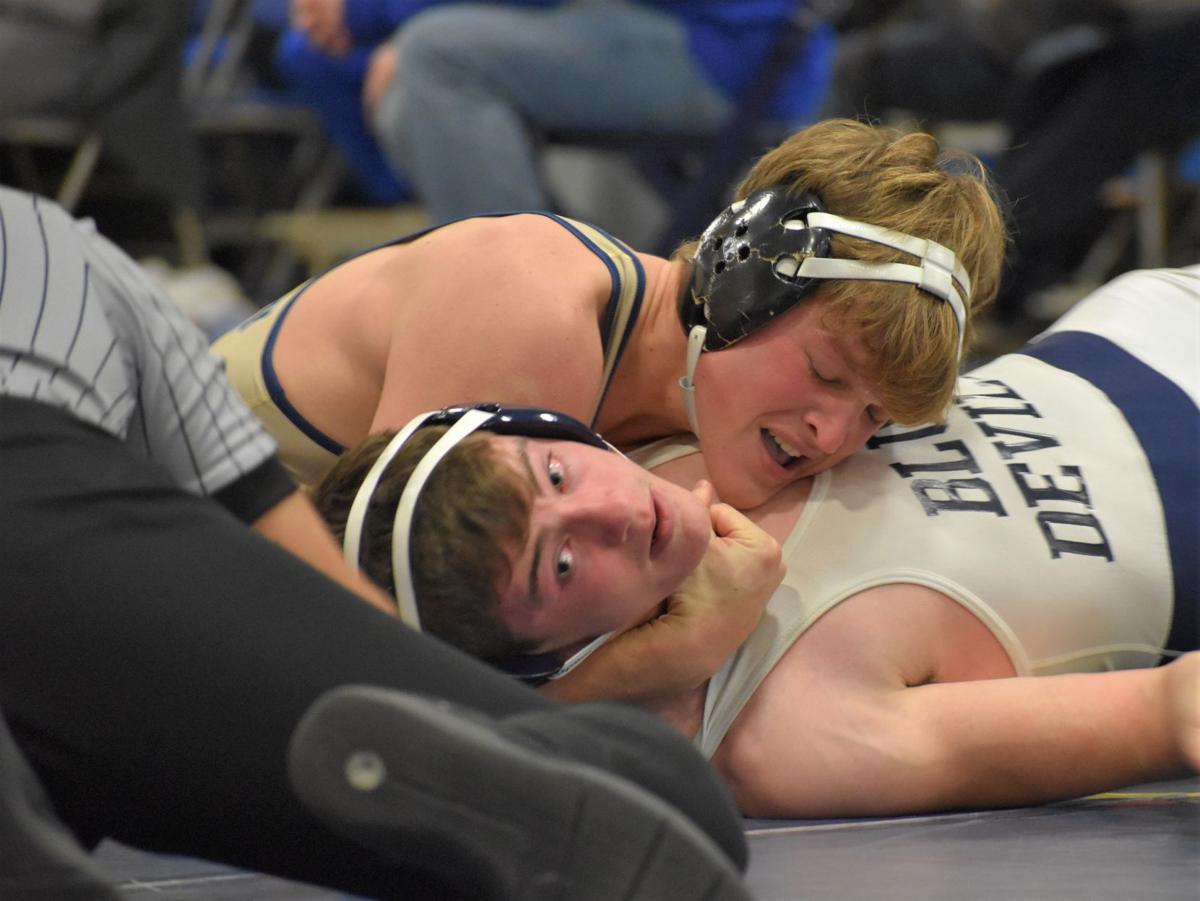 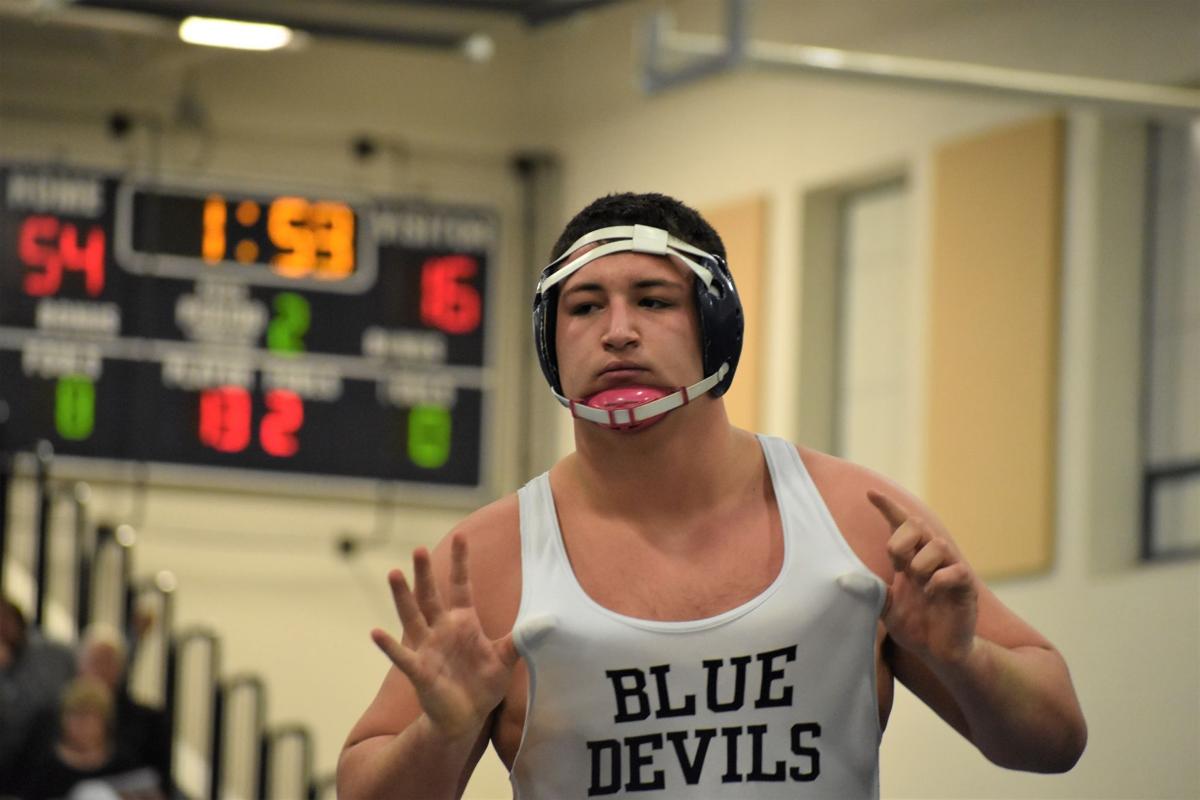 Burgettstown’s Turner Lehman puts his finger up to his mouth to shush the McGuffey crowd after a second-period pin in the Class AA Section 1 team wrestling championship Wednesday night.

Members of the Burgettstown wrestling team watch with angst during one of the final bouts in the Class AA Section 1 team tournament at McGuffey High School. The Blue Devils will make their first trip in program history to Hershey for the state team tournament.

CLAYSVILLE – Jacob Noyes had his back against the wall.

But as Burgettstown wrestling coach Joey Vigliotti described, the freshman will never stop.

Noyes showed as much, and more, when it was do or die for the Blue Devils in the final bout Wednesday night.

With Burgettstown clinging to a two-point lead, Noyes battled back from a 5-0 deficit after the first period. Forcing McGuffey freshman Kyle Brookman into multiple stalling warnings, violations and eventually a disqualification in the waning seconds, Burgettstown held off the Highlanders to win the Class AA Section 1 title, 41-34.

A decision for Brookman, which looked like a forgone conclusion after the first two minutes at 138 pounds, would have given McGuffey a one-point victory.

“I don’t know,” said first-year McGuffey coach Jared Roberts. “He put it in the ref’s hands. I disagree with how he was calling it. I thought their kid was riding parallel. I don’t know if he was really working for a half.”

The stalling infractions on Brookman began in the second period and continued most of the third. Another stalling point was awarded to Noyes with 55 seconds left. It was ruled a disqualification and six points for the Blue Devils with 17 seconds remaining.

They were deducted one point for a celebration penalty.

“I just kept trying to turn him and get the points,” Noyes said of the final two periods. “I wasn’t focused about the calls. I wasn’t thinking or caring about that. I just wanted to turn him.”

McGuffey took early control of the match in powerful battles through the middle and upper weights. Ethan Barr (160) won by fall in 32 seconds. Seth Burgdolt hit a reversal on D.J. Slovick in the final seconds to win 4-2 at 170. Falls by Garrett Boone (195) and Tasso Makripodis (220) gave the Highlanders a 24-12 lead over Burgettstown after seven bouts.

“I felt confident,” Roberts said. “Our kids were doing the job. They were doing what they needed to do. I’m proud of all of them. We just came up short.”

That was because of Burgettstown heavyweight Riley Kemper and many lightweights for the Blue Devils coming up big. Kemper cut into the lead with a pin in 51 seconds. Shane Ilgenfritz (106), Joey Sentipal (120) and Hunter Guiddy (126) all won by fall to take a 36-30 lead with two bouts left.

“When we did the math, we had another option at 106 and could have bumped Shane up to 113,” Vigliotti explained. “We decided to stick with our guns. We wrestled it out, straight up.”

McGuffey’s Nate Yagle made it a two-point match, 36-34, in the penultimate bout with a 13-4 major decision over Anthony Lancos.

It is the second section championship for Vigliotti as a head coach and second for Burgettstown since 2010. The Blue Devils defeated Beth-Center, 48-26, to advance to the final. McGuffey cruised past South Park, 58-16, in its opening bout.