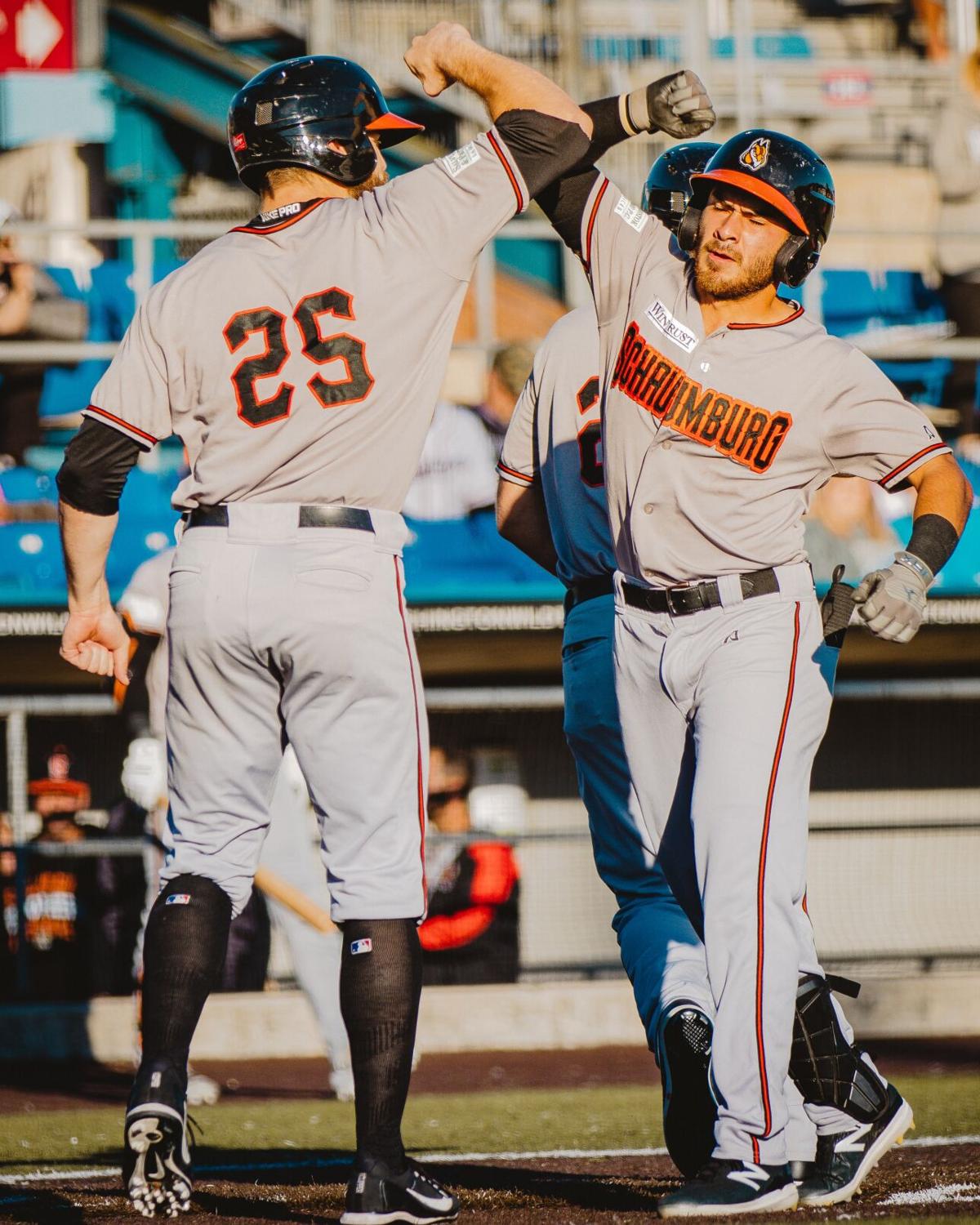 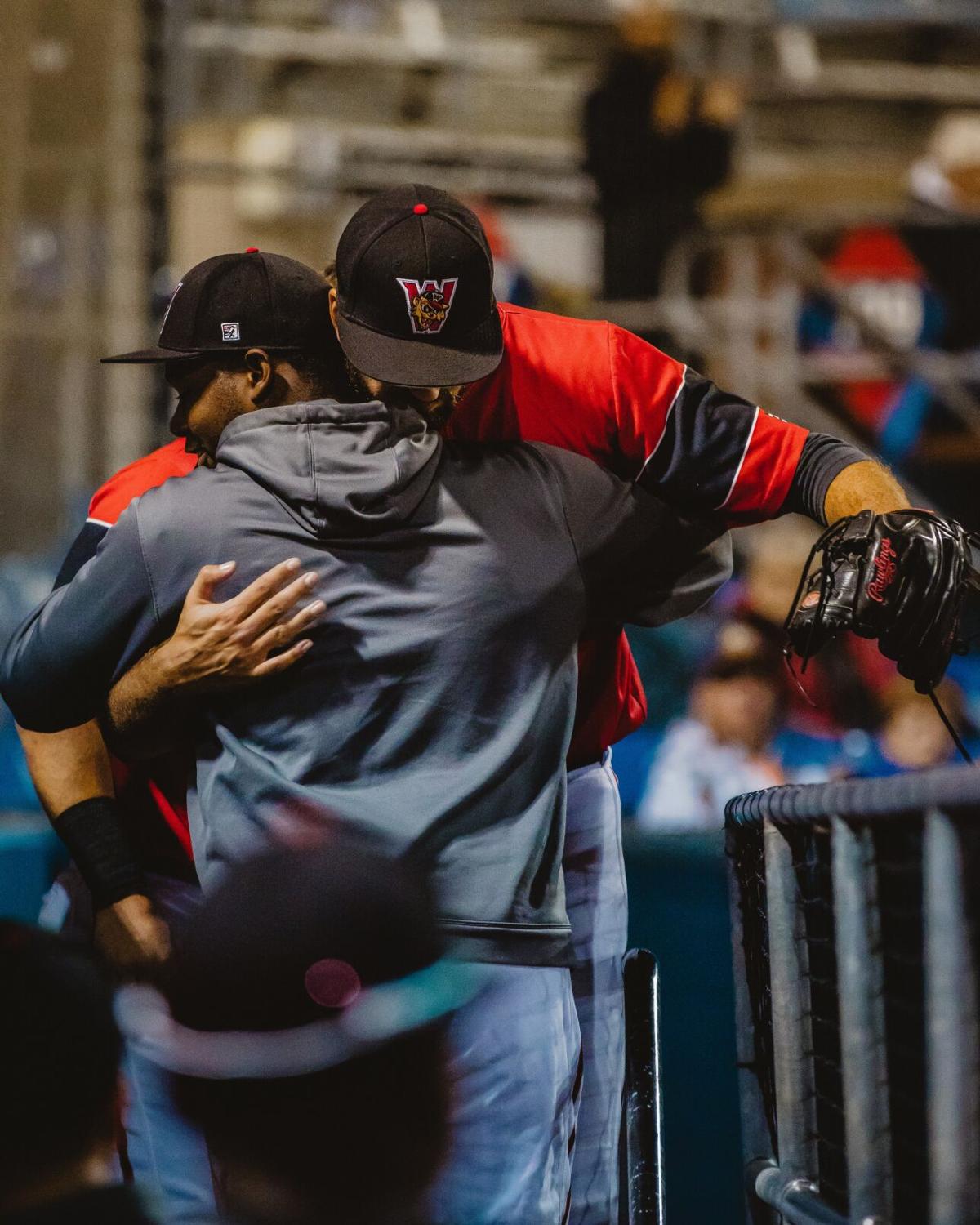 Washington relief pitcher Zack Strecker is hugged by teammate Daren Osby after the final out in the top of the ninth inning Sunday in Game 5 of the Frontier League’s championship series, won by Scahumburg, 10-4. Strecker, who is the league’s all-time saves leader, has announced that he is retiring from baseball. 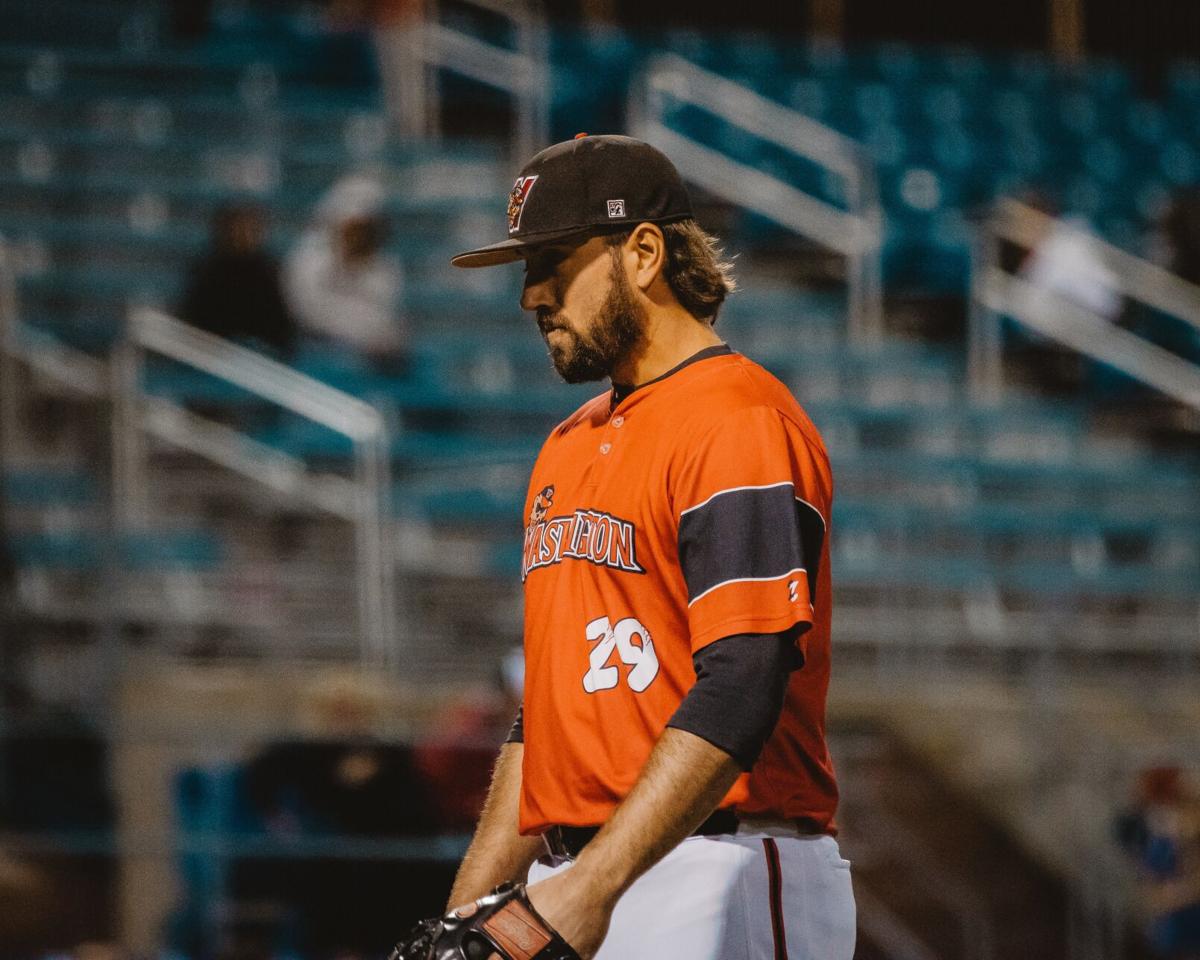 Washington relief pitcher Zach Strecker shows the dejection of the Wild Things’ 10-4 loss to the Schaumburg Boomers in Game 5 of the Frontier League’s championship series. Schaumburg won 10-4 to win its fourth league title since 2013.

Washington relief pitcher Zack Strecker is hugged by teammate Daren Osby after the final out in the top of the ninth inning Sunday in Game 5 of the Frontier League’s championship series, won by Scahumburg, 10-4. Strecker, who is the league’s all-time saves leader, has announced that he is retiring from baseball.

Washington relief pitcher Zach Strecker shows the dejection of the Wild Things’ 10-4 loss to the Schaumburg Boomers in Game 5 of the Frontier League’s championship series. Schaumburg won 10-4 to win its fourth league title since 2013.

Four times they have been here.

And for the fourth time, it didn’t work out for the Wild Things.

The more things change, the more they stay the same.

The journey that took the Wild Things from nine games out of first place in July to the cusp of their first Frontier League championship ended Sunday night in brutal fashion.

Washington was stymied again by Schaumburg righthander Kyle Arjona and the Boomers’ bats boomed with four home runs. It added up to a 10-4 romp for Schaumburg in Game 5 of the Frontier League’s best-of-5 championship series, leaving the Wild Things to watch the opponent and its vocal contingent of fans celebrate a championship on their field.

It was the fourth time in their 19-season history that the Wild Things have reached the finals, and each time they have fallen short of a title, losing a decisive Game 5 the last three times.

Schaumburg won its fourth championship since 2013.

“It never gets old,” Schaumburg manager Jamie Bennett said, “especially after a year with no baseball. They’re all different. We have only two guys from when we won it last in 2017. They’re all a special feeling because the guys bust their butts all summer.”

The Boomers hit four home runs in the first four innings to build a commanding 8-1 lead.

“We’re a very loose team,” Bennett said, “but getting an early lead like that eases the tension, even in a Game 5.”

Because it was in a big early hole, there was no more late-innings magic for Washington. No more comebacks. No more clutch hitting. No more hitting, period.

Arjona, who threw 7 2/3 shutout innings to win Game 1, fired a complete game for his third postseason win. He gave up five hits and four runs (three earned). Arjona gave up three meaningless runs in the bottom of the ninth.

After the awarding of the championship trophy, Arjona was named the Most Valuable Player of the finals.

“He shut us down twice,” Washington manager Tom Vaeth said.

Schaumburg wasted no time in taking control of the game as Matt Bottcher hit a three-run homer in the first inning off Washington starter Ryan Hennen, the Frontier League’s Pitcher of the Year. Hennen lasted only two innings, giving up four runs.

Vaeth left himself open to second-guessing in the third inning. With Schaumburg leading 4-1, Washington’s Nick Ward belted a two-out triple to right centerfield. It brought to the plate right fielder Bralin Jackson, who left Game 4 with a wrist injury. During batting practice Sunday, Jackson did not swing the bat, opting to bunt each pitch. In his first plate appearance, Jackson put down a sacrifice bunt, which set up Scotty Dubrule’s sacrifice fly that cut Schaumburg’s lead to 3-1.

After Ward’s triple, Jackson bunted again, this time to first baseman Braxton Davidson for an easy inning-ending out.

“He can’t swing the bat,” said Vaeth, who admitted he didn’t consider pinch-hitting for Jackson.

“Not right there. It all happened so fast. Nobody is expecting a two-out triple. As long as it was close, I was going to ride with Bralin. It worked in the first inning. When we got too far behind we had to go with someone else.”

The Boomers broke the game open in the fourth, hitting three home runs off reliever Daren Osby to make it 8-1. Nick Oddo led off the inning with a home run, Quincy Nieporte, the league MVP, had a two-run shot and Davidson made it back-to-to-back homers.

To add to the Wild Things’ misery, Schaumburg scored two runs on a sacrifice fly to deep center field in the eighth. Matt McGarry scored from third base and Alec Craig raced home from second base. Washington appealed that Craig left second too early, sparking heated jawing between dugouts and leading to both teams being issued warnings.

“They earned it,” Vaeth said of Schaumburg’s championship. “They came out swinging the bats. They hit four home runs. You can’t say they stole it.”

The Wild Things led at the end of only two of the 45 innings in the series. … Washington is 0-4 all-time when playing Game 5 of a playoff series. The Wild Things never led in any of those games and were outscored 44-12. … Bennett is one of two managers to win four Frontier League titles, joining Mal Fichman, who won with three different teams (Johnstown, Erie and Springfield). … Washington closer Zach Strecker, who has said he is retiring, pitched a 1-2-3 ninth inning then responded when the remaining Wild Things fans demanded a curtain call.