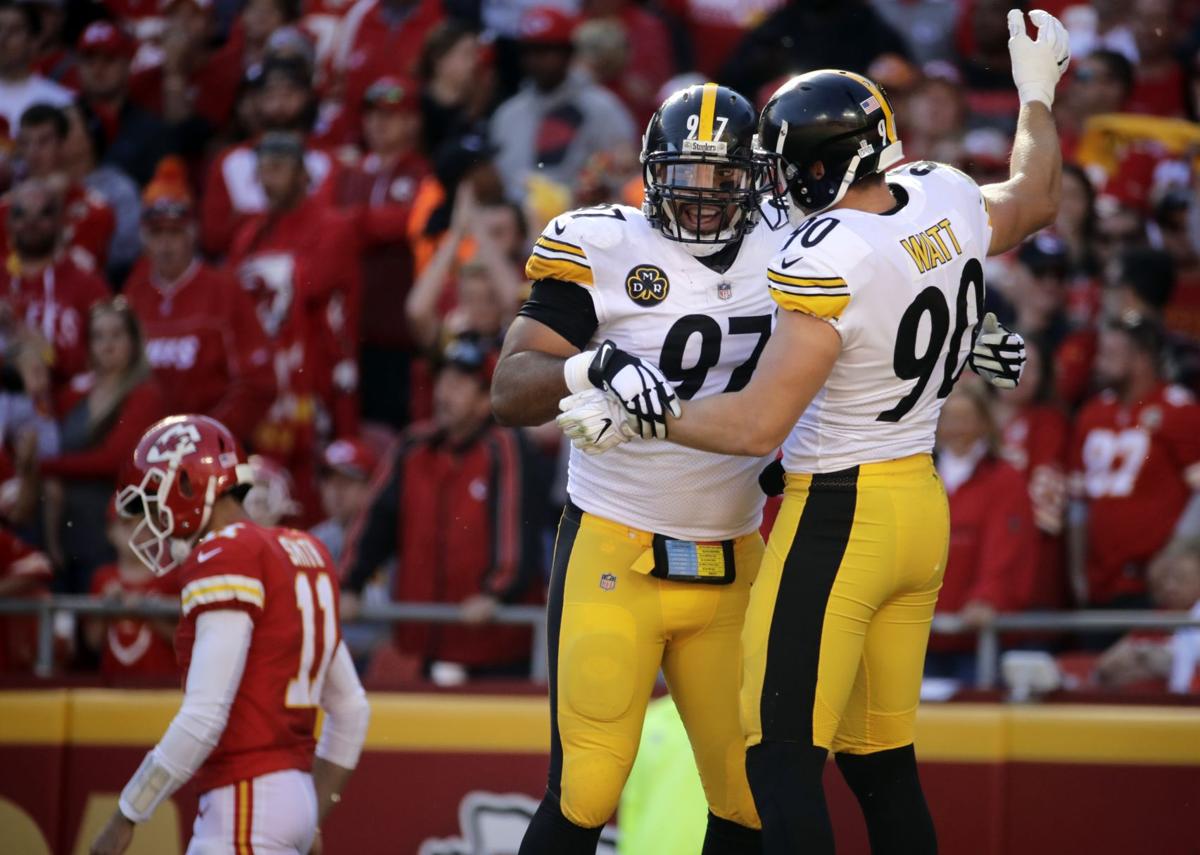 Pittsburgh Steelers linebacker T.J. Watt (90) and defensive end Cameron Heyward (97) celebrate a Chiefs safety when the ball got away from quarterback Alex Smith (11), during the first half of an NFL football game in Kansas City, Mo., Sunday, Oct. 15, 2017. (AP Photo/Charlie Riedel) 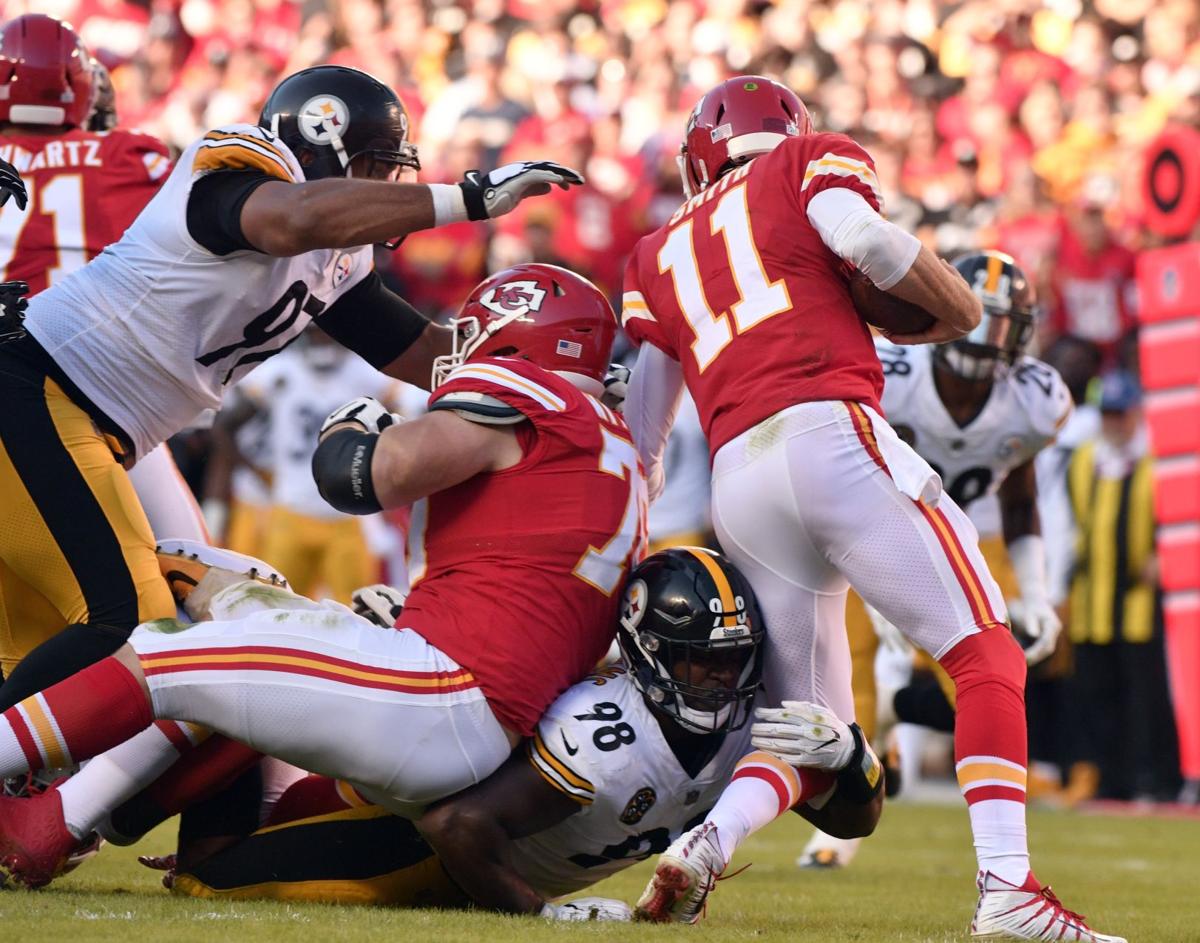 Pittsburgh Steelers linebacker T.J. Watt (90) and defensive end Cameron Heyward (97) celebrate a Chiefs safety when the ball got away from quarterback Alex Smith (11), during the first half of an NFL football game in Kansas City, Mo., Sunday, Oct. 15, 2017. (AP Photo/Charlie Riedel)

PITTSBURGH – It’s not all that unusual for a linebacker to lead the Steelers in sacks.

In fact, given the way Pittsburgh’s defense is designed, it’s kind of expected.

But the linebacker currently leading the team in sacks isn’t someone you would generally think of as a pass rusher.

After recording two sacks on the same series in last Sunday’s 19-13 victory over the Kansas City Chiefs, which improved the Steelers to a 4-2 record, inside linebacker Vince Williams now leads the team with four. Three of those four sacks have come in the past two games.

For a player who leaves the field at times on obvious passing downs and entered the season with 2.5 career sacks, nobody would have thought Williams would be the team leader. And Williams, one of the more vocal Steelers both in the locker room and on the field, isn’t afraid to let his teammates hear about his success.

“He’s rubbing it in every day,” said defensive end Stephon Tuitt, who is second on the team in pressures but has yet to record a sack.

That has to be concerning to Pittsburgh’s opponents. While the Steelers have 20 sacks, some of the players who would have been considered the team’s better pass rushers entering the season haven’t really gotten going just yet.

“They mix and match,” said Lewis, crediting defensive coordinator Keith Butler. “Keith does a great job of pairing them together. Who is going to be the rusher based on a particular pressure and changing it up. Right now, Williams is doing a great job of rushing from inside linebacker and winning his matchups. They’re doing a great job. (Rookie) T.J. Watt has gotten off to a great start. It’s a matter of who’s at the tip of the sword. When your number is called, their guys are producing.”

Anthony Chickillo, who is tied with Watt and defensive end Cameron Heyward with three sacks each, said that is exactly the case.

“I feel like our whole room is capable of making plays,” Chickillo said of the team’s linebackers. “I feel like any of us can get there. Any of us can make that play. I feel comfortable with any of us.”

Like Williams, who did not practice Wednesday with a sore hip, Chickillo’s opportunities to rush the passer have been limited. But he’s taken advantage when given the chance.

Nine different players have recorded sacks for the Steelers, something that has been a key ingredient in the team’s pass defense. The Steelers have allowed 153.5 yards per game through the air to lead the NFL.

Inside linebacker Ryan Shazier joins Tuitt with no sacks, despite getting pressure on opponents’ starting quarterbacks. James Harrison, the team’s all-time sack leader, didn’t record his first until Kansas City’s final possession last Sunday. Harrison had only played seven snaps in Pittsburgh’s first five games before getting 15 against the Chiefs.

Lewis expects to see Harrison this week as part of the Steelers’ dynamic pass rush.

“No one has seen James more than me,” said Lewis. “(He just has) tremendous spirit. I love him when he’s not playing against us.”

Steelers head coach Mike Tomlin said he is open to Harrison continuing to play. But whether he plays or not, Pittsburgh knows it has to continue to bring the pressure.

And it doesn’t matter who gets the sacks, even if they come from the talkative Williams.

Running back Le’Veon Bell was named the AFC’s Offensive Player of the Week Wednesday for his 179-yard rushing effort last Sunday against Kansas City. It is the third time in his career Bell has won the award. … The Steelers signed offensive lineman Jake Rodgers to their practice squad and released wide receiver Justin Thomas. … Center Maurkice Pouncey (chest), guard Ramon Foster (back), right tackle Marcus Gilbert (hamstring) and Tuitt (back) joined Williams on the sideline during practice Wednesday. ... Linebacker Tyler Matakevich (shoulder) was a full participant.

Dale Lolley is a contributor to the Observer-Reporter and has been covering the Pittsburgh Steelers since 1993.