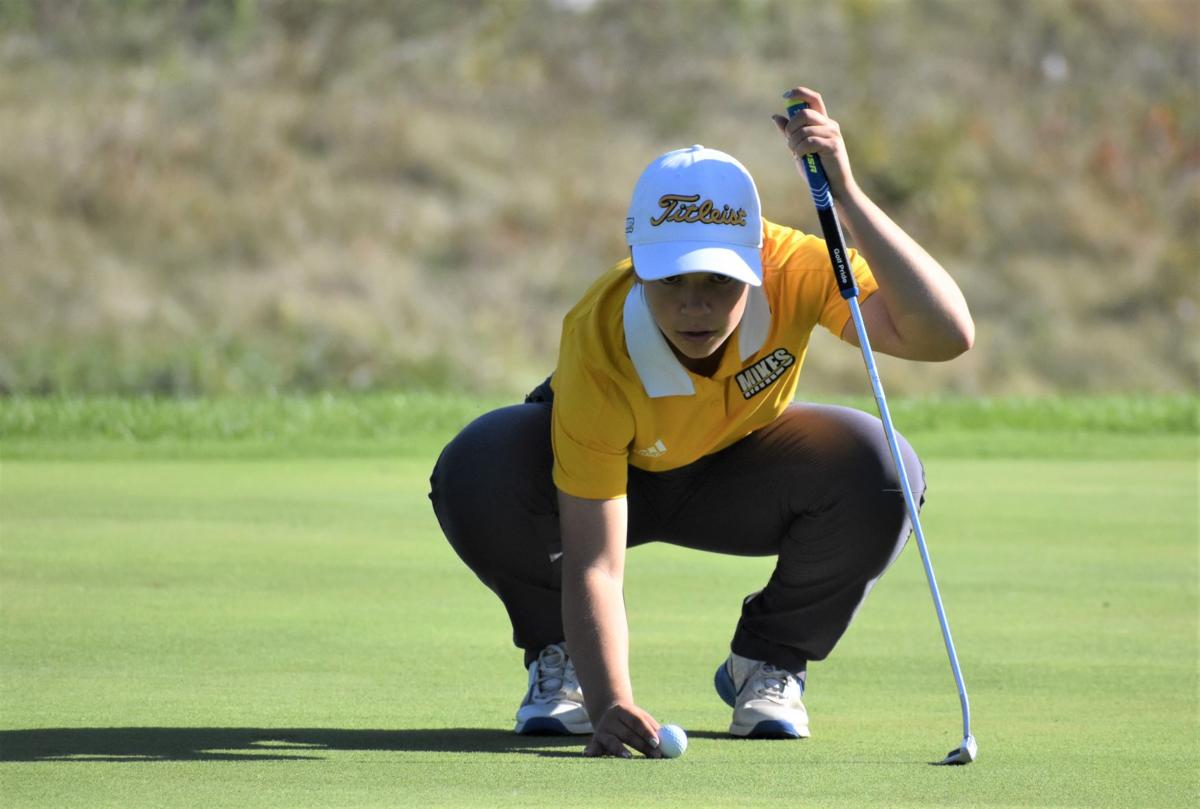 Carmichaels’ Remmey Lohr looks under the brim of her hat as she reads a putt in the PIAA West Regional at Tom’s Run Golf Course. 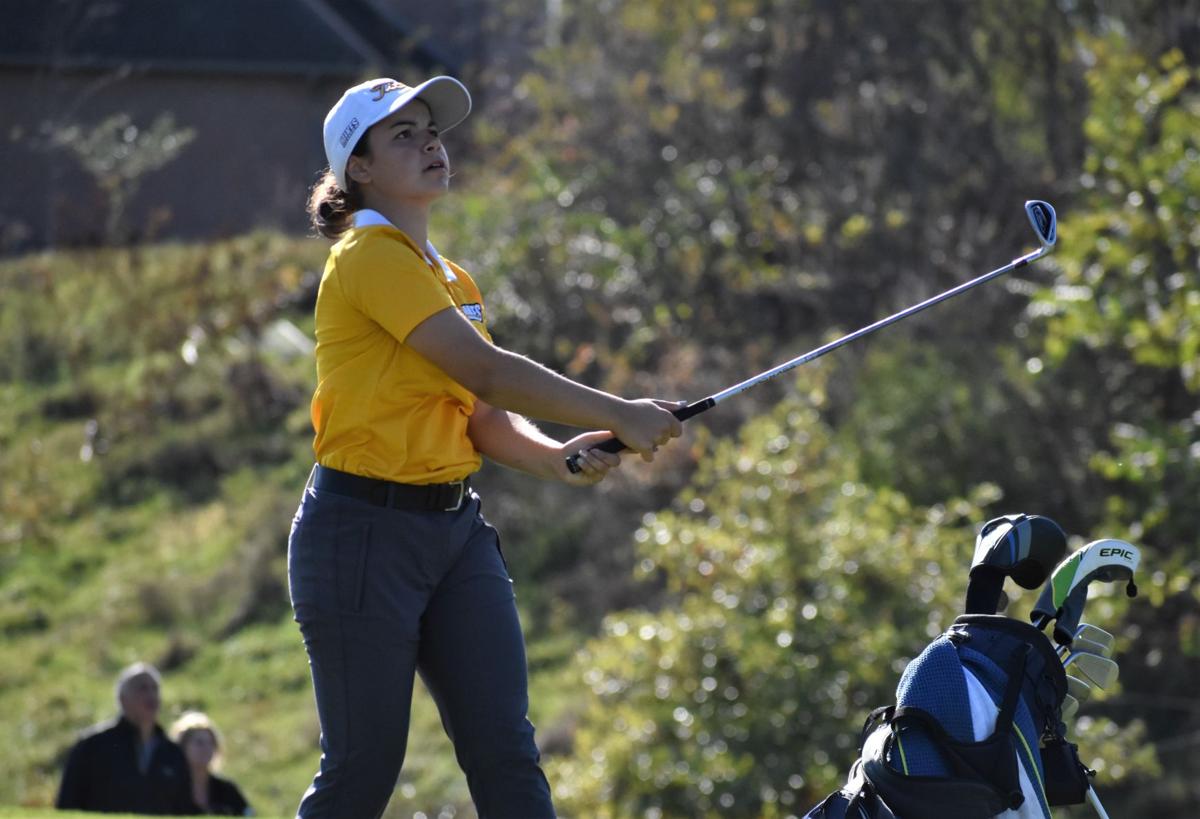 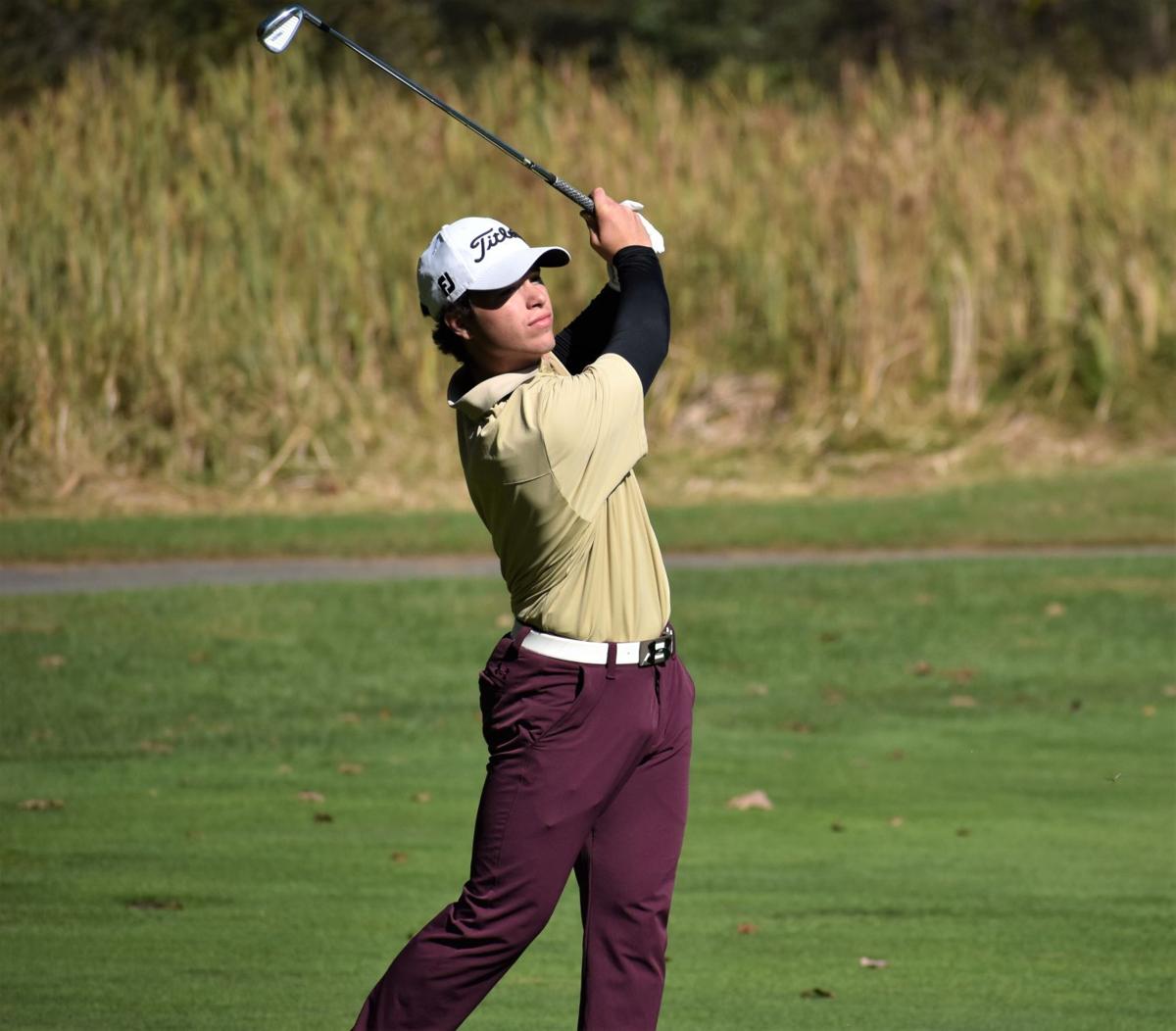 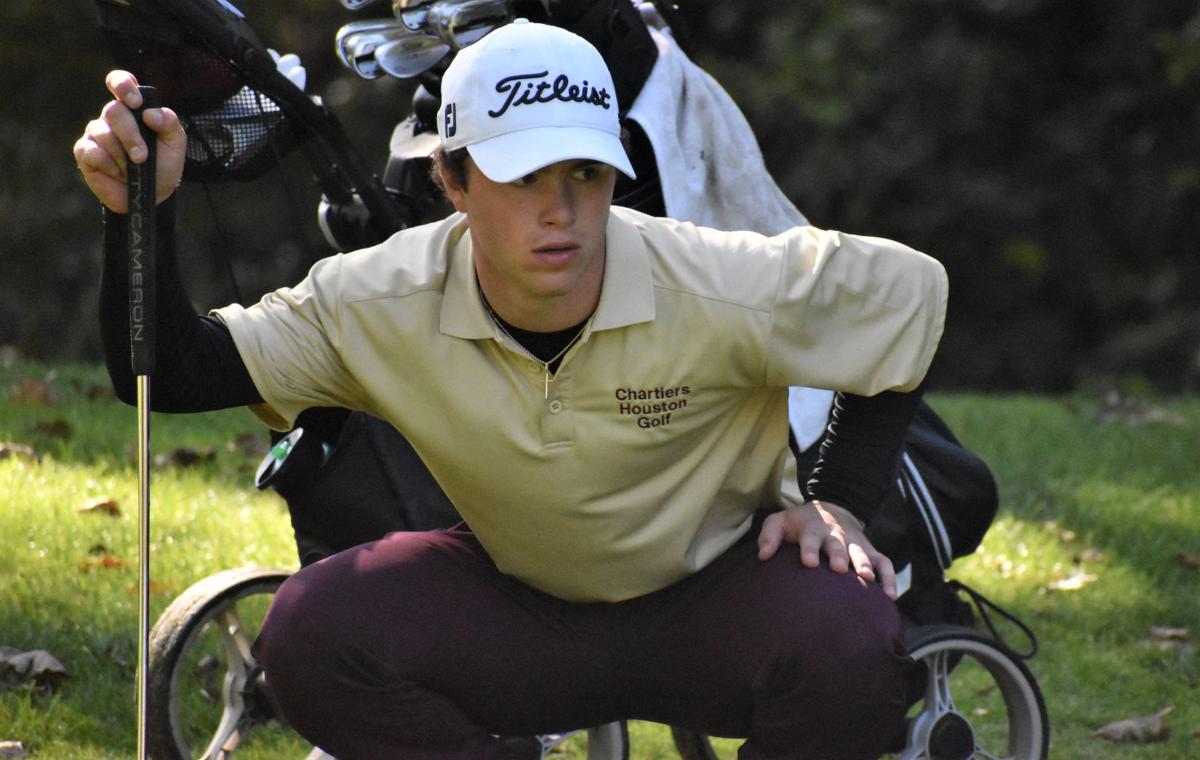 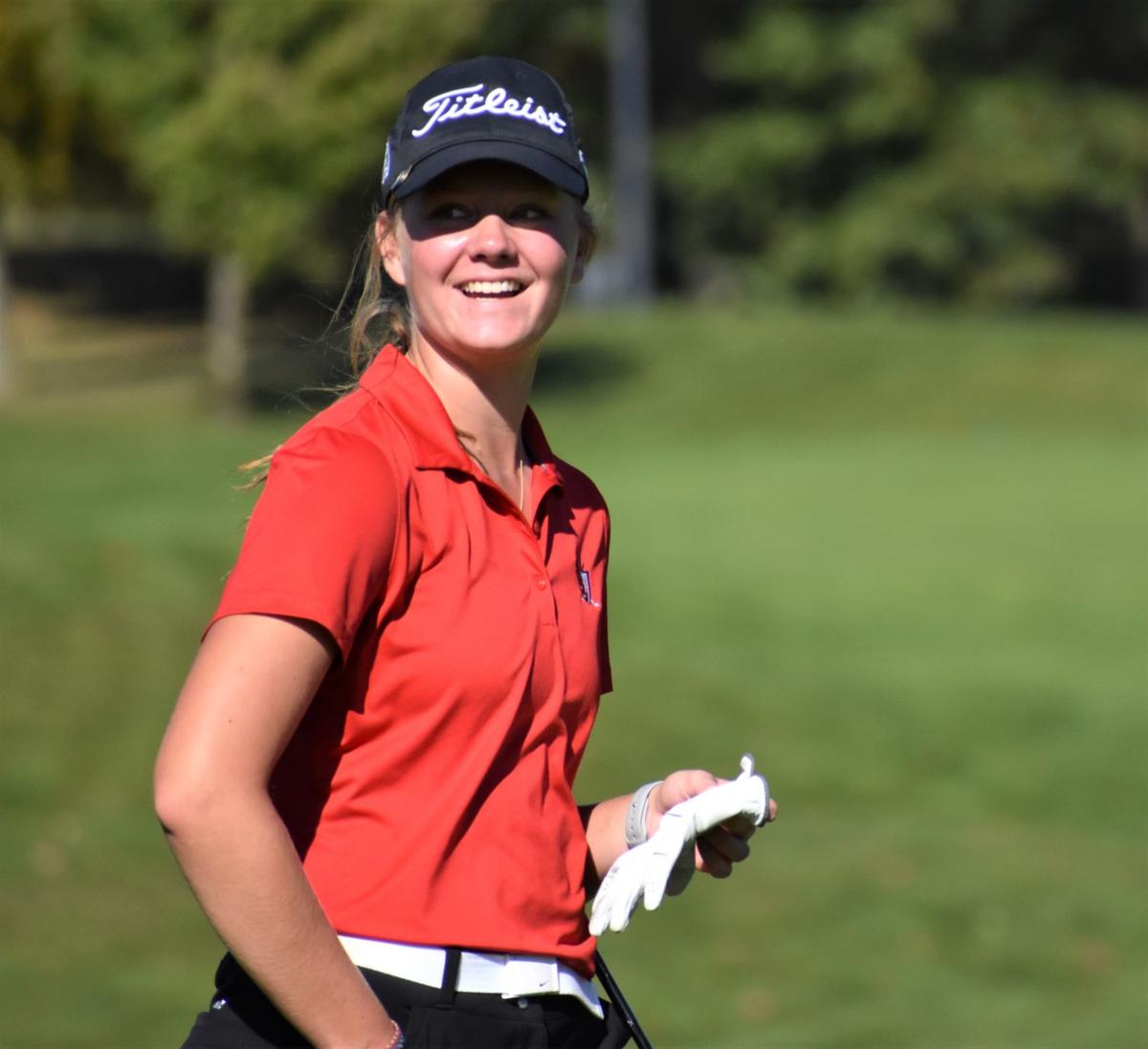 Peters Township’s Ella McRoberts cracks a smile after hitting an approach shot within a few inches of the No. 6 hole in the PIAA West Regional at Tom’s Run Golf Course.

Carmichaels’ Remmey Lohr looks under the brim of her hat as she reads a putt in the PIAA West Regional at Tom’s Run Golf Course.

Peters Township’s Ella McRoberts cracks a smile after hitting an approach shot within a few inches of the No. 6 hole in the PIAA West Regional at Tom’s Run Golf Course.

BLAIRSVILLE – The wait can be agonizing.

Carmichaels High School golf coach Dave Briggs knows all about the wait – the delay between when a golfer completes an early round and must wait for the remainder of the field to play before finding out how he or she has finished.

The pressure weighs on Briggs, but it’s worse for the golfers – except for the Mikes’ Remmey Lohr, who took Briggs’ words last week to heart.

“We started talking about the focus being about just trying to move on,” Briggs said. “It’s about getting them to the mindset of trying to win.”

Lohr wasn’t waiting to see if she would advance Tuesday afternoon at the PIAA Class AA Boys West Regional at Tom’s Run Golf Course. That much was a given. Lohr was eager to see if her score would hold up for a win.

Carding an even-par 72, Lohr continued her incredible postseason run and finished in second place in the 44-player field.

“This round didn’t feel real at all,” Lohr said. “I’ve never played this good.”

Lohr was the only girl in the Class AA boys field, choosing to play this entire postseason in the boys championship. Her sister, Delaney, competed in the girls championship. Because Carmichaels doesn’t have a girls golf team, the two must play in separate championships.

“My goal was to make it (to the WPIAL championship),” Lohr said. “I had no other expectations. I’m just here as a girl, so whatever I did it was pretty cool and a great opportunity.”

She wasn’t the only local girl golfer to have success. Peters Township’s Ella McRoberts shot 77 and tied for first place in Class AAA.

Lohr and McRoberts join a pair /of Chartiers-Houston teammates, Jack Hritsko and Spencer Kane, to advance to the PIAA Championships Oct. 21 and 22 at Heritage Hills Golf Resort in York. Hritsko shot 73 to finish in third place in Class AA. Kane survived a playoff hole to finish tied for 19th.

Central Catholic freshman Rocco Salvitti of Canonsburg was tied for third in boys Class AAA with a 1-under 71.

A steady round for Lohr featured nine pars, four birdies and chipping in for eagle on the 454-yard, par-five No. 13. She also had a triple-bogey but recovered nicely after her only three-putt of the day.

“I keep trying to build her confidence,” Birggs said. “Man, she guts it out. I don’t think she knows how good she can be. Today might have been an inkling of how she can take her game to a higher level. She is a gamer. When it’s under the gun, she gets a laser-like focus, puts her nose down and just goes.”

To make it to Tom’s Run, Lohr exceeded her own expectations by becoming what is believed the only girl to play in a boys WPIAL championship. Now, she will try to improve on her 14th-place finish from states last year when she competed in the girls championship.

The best shot of McRoberts’ winning round was when didn’t take a full swing with her 9-iron from 120 yards and stuck it six inches from the cup on No. 6. She ended up with birdie. McRoberts tied with Isabella Walter of North Allegheny.

It was the first time at the regional for McRoberts.

“The only time I was nervous was on the first tee,” she said. “My goal was just to make it (to the finals). All of this was extra. I just tried to play loose, have fun and see what happened. I noticed the more I did, the better I kept playing.”

McRoberts shot 40 on the front nine and knew a sub-40 score on the back would likely advance her to states.

“I’ve just been more consistent,” McRoberts said of the difference between this year and last. “From hitting more greens and fairways to my putting stroke. It felt better overall and today.”

It was a consistent performance that allowed Hritsko to advance to his second straight state championship. Riding a strong start, Hritsko parred his first nine holes then birdied the 10th. He never left the top five throughout the round.

“I just started off really steady,” Hritsko said. “I was hitting fairways and greens and two-putting, just playing pretty simple. I knew coming in that if you shoot in the 70s, then you will be good. When I was 1-under through 10 holes it came down to a matter of how high could I finish. I’m pumped.”