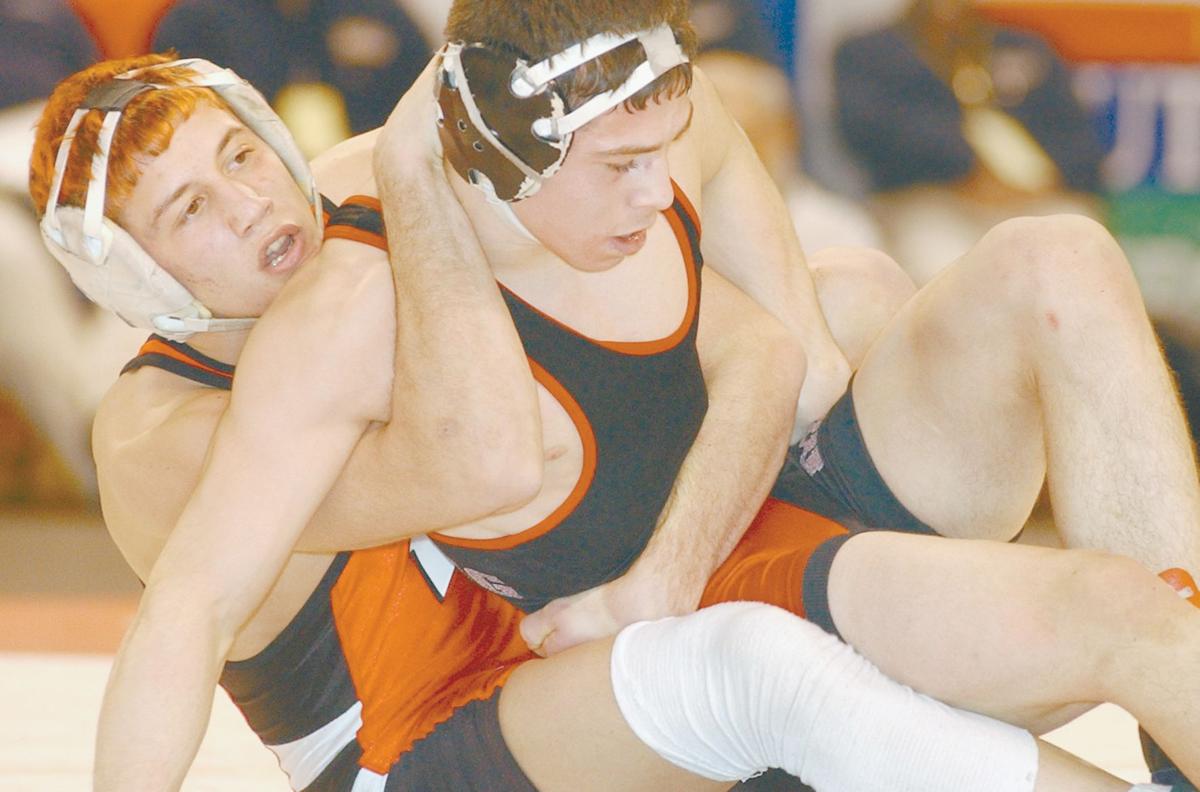 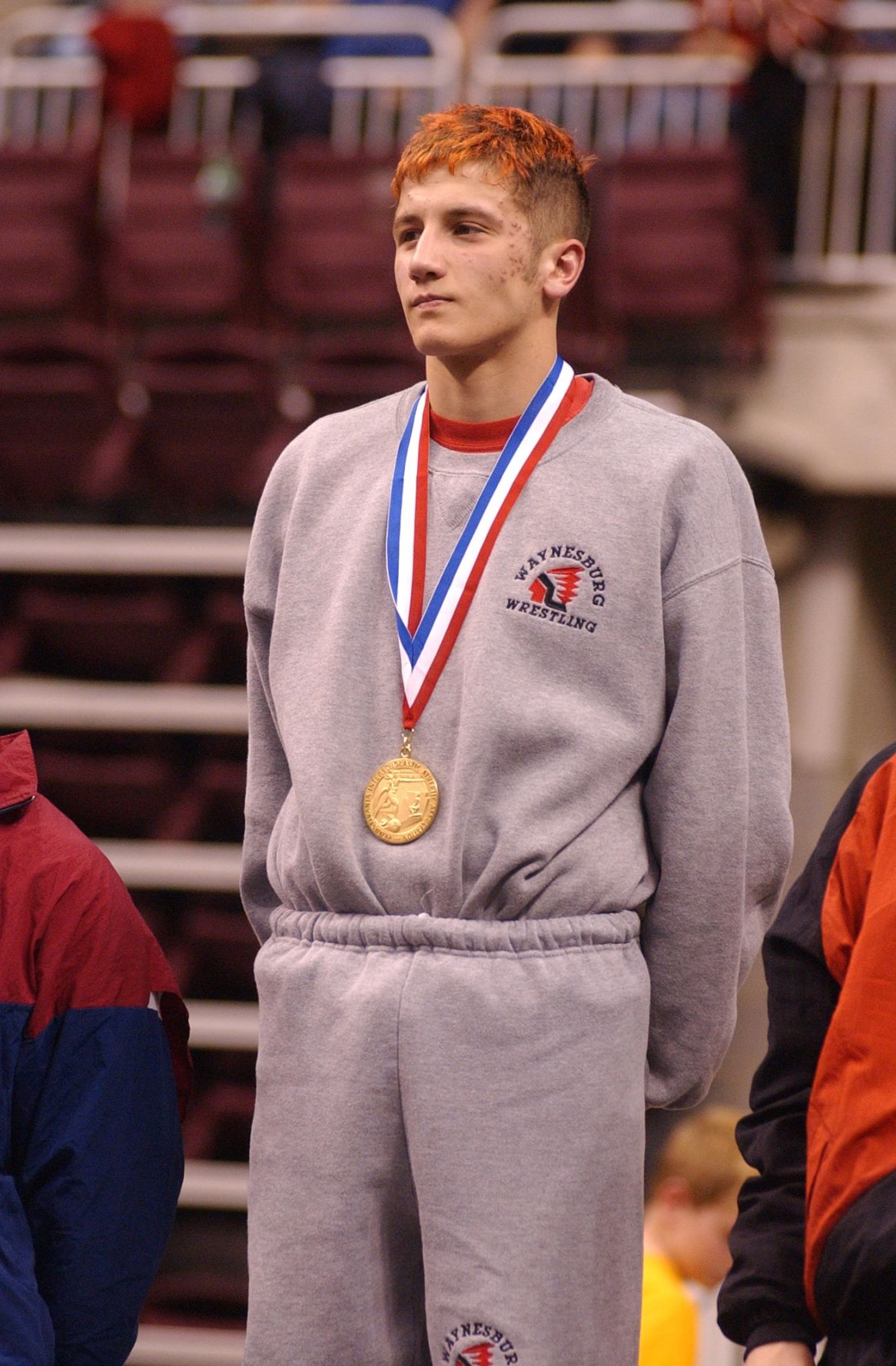 The trip back in time for today’s “When Sports Were Played” stops at March 6, 2004, when Waynesburg’s Coleman Scott became the 35th wrestler in Pennsylvania to win three state wrestling championships.

HERSHEY – In those final seconds, when Coleman Scott realized that the gold medal up for grabs in the 125-pound finals was going to be hanging around his neck and not that of Reading’s Charles Griffin, he allowed himself a rare moment of celebration.

Looking up to the large contingent of Waynesburg fans in the Giant Center, Scott nodded and smiled. Four long seasons worth of work was about to pay its final dividend.

The senior from Waynesburg High School, from whom so much was expected, delivered the goods Saturday night in spectacular fashion.

Scott hit a five-point move with 16 seconds remaining to break a 2-2 tie and take a hard-fought 7-3 victory from Griffin and win his third state title.

“There is a lot of relief,” Scott said. “It was such a high-pressure situation. I just couldn’t lose my last high school match.”

Scott became the 35th wrestler in the 68-year history of this tournament to win three state titles. No. 34 came earlier in the day when Freedom’s Kurt Brenner won at 171 pounds in Class AA.

Scott’s first two victims in the state finals were Clearfield’s Brad Pataky, who was shut out 9-0 in Scott’s sophomore season; and Brad Canterbury of Wissahickon, whom Scott beat by a 16-0 technical fall last season at 112 pounds.

A 4-0 loss to Belle Vernon’s Aaron Olszewski in the semifinals of the 112-pound state finals in 2001 ruined his chances to become the PIAA’s 10th four-time champion.

Scott, headed to Oklahoma State next fall, opened the scoring in the first period when he countered an ankle pick by Griffin and slipped around for a takedown with 43 seconds remaining in the period.

It stayed that way until 14 seconds remained in the second period. Scott rode Griffin for the first 1:46 but got out of position when Griffin turned in for a reversal that made it 2-2.

Scott began the third period on bottom and bided his time while looking for an opening. It came with about 25 seconds remaining and Griffin sitting behind Scott.

“He’s so tough on top that I just waited for a mistake and then tried to counter it,” Scott said.

The mistake came when Griffin allowed Scott to slip out only a few inches. Scott bent back, trapped Griffin’s head, reversed him and turned him to his back with 16 seconds left. Suddenly a 2-2 bout had turned into a 7-2 lead for Scott.

It was similar to a move Scott used in the final moments of the Beast of the East finals to beat Mike Rowe of DeMatha High School in Maryland.

“I think I surprised him a little,” Scott said.

Griffin avoided a possible pin by turning back on his stomach and Scott released him a moment before the buzzer sounded.

As the Waynesburg fans roared, Scott raised his finger to indicate that he was indeed No. 1 ... still.

“Coleman Scott will be a name that will not soon be forgotten here,” Yates said. “Three-time champions are few and far between.”

Scott’s victory highlighted a good day for the area’s Class AAA wrestlers as nine of the 12 placed. Three other Waynesburg wrestlers placed: Mark Throckmorton, who took third at 130 pounds after receiving a forfeit from the injured Ashtin Primus of Connellsville; Chris Neidermeier, who was fifth at 103; and Corbin Semple, who was sixth at 160.

Trinity’s Dan Burkholder placed fourth at 135 and Mark Powell was seventh at 140. Canon-McMillan’s Kyle Deliere won the sixth-place medal at 171 while Mike Catalano was eighth at 145. McGuffey’s Garrett Hunter was eighth at 189.