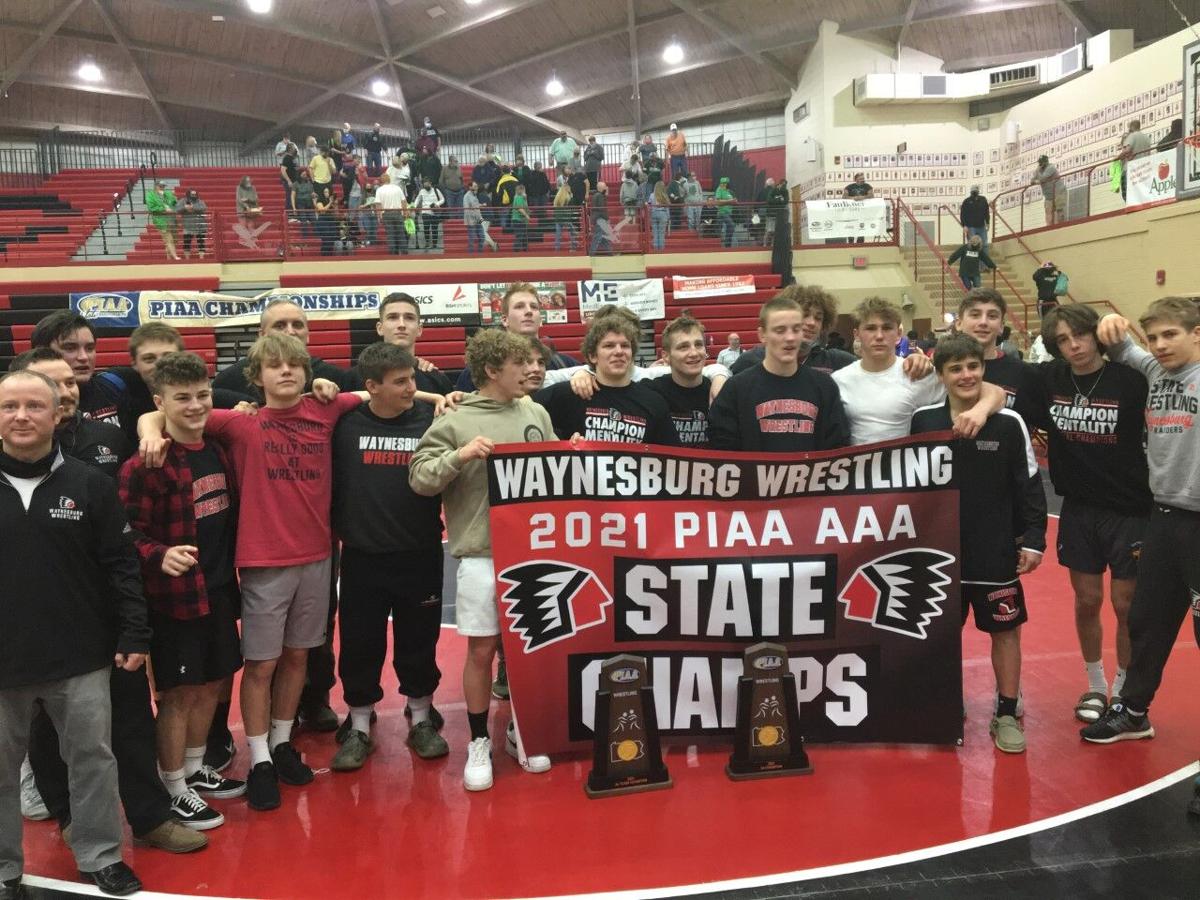 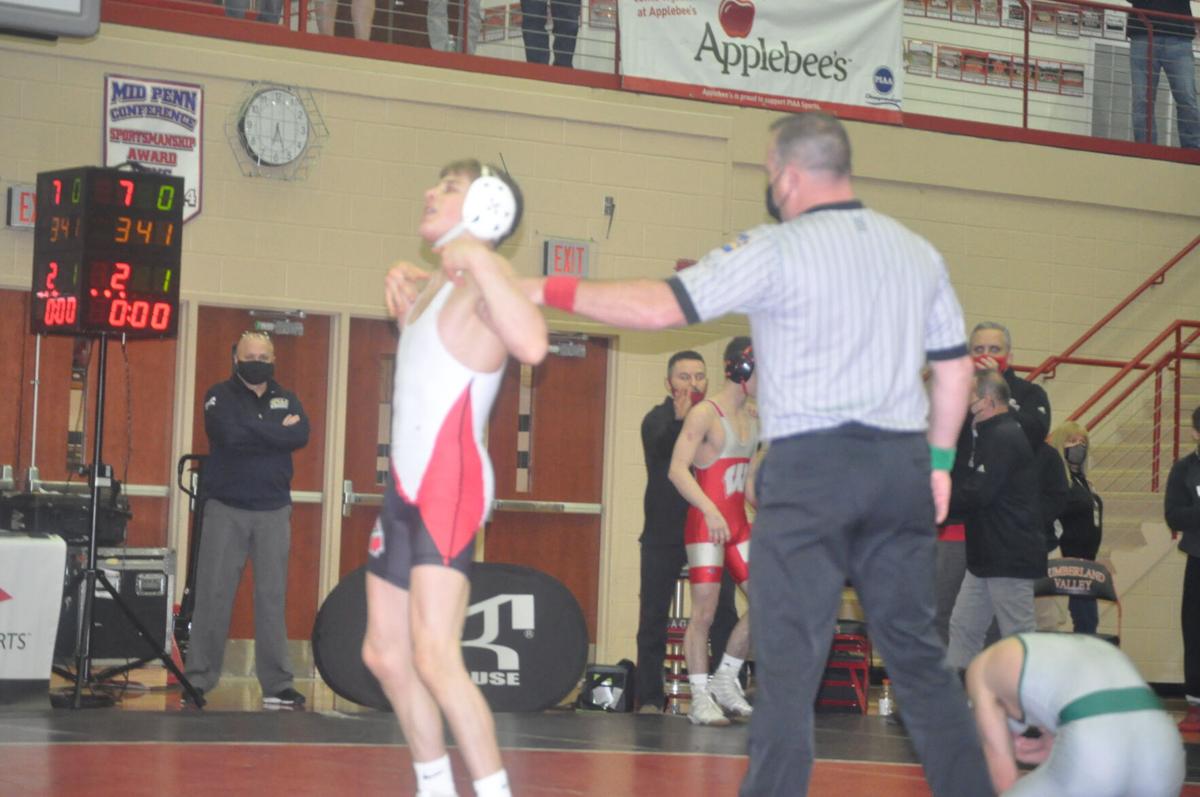 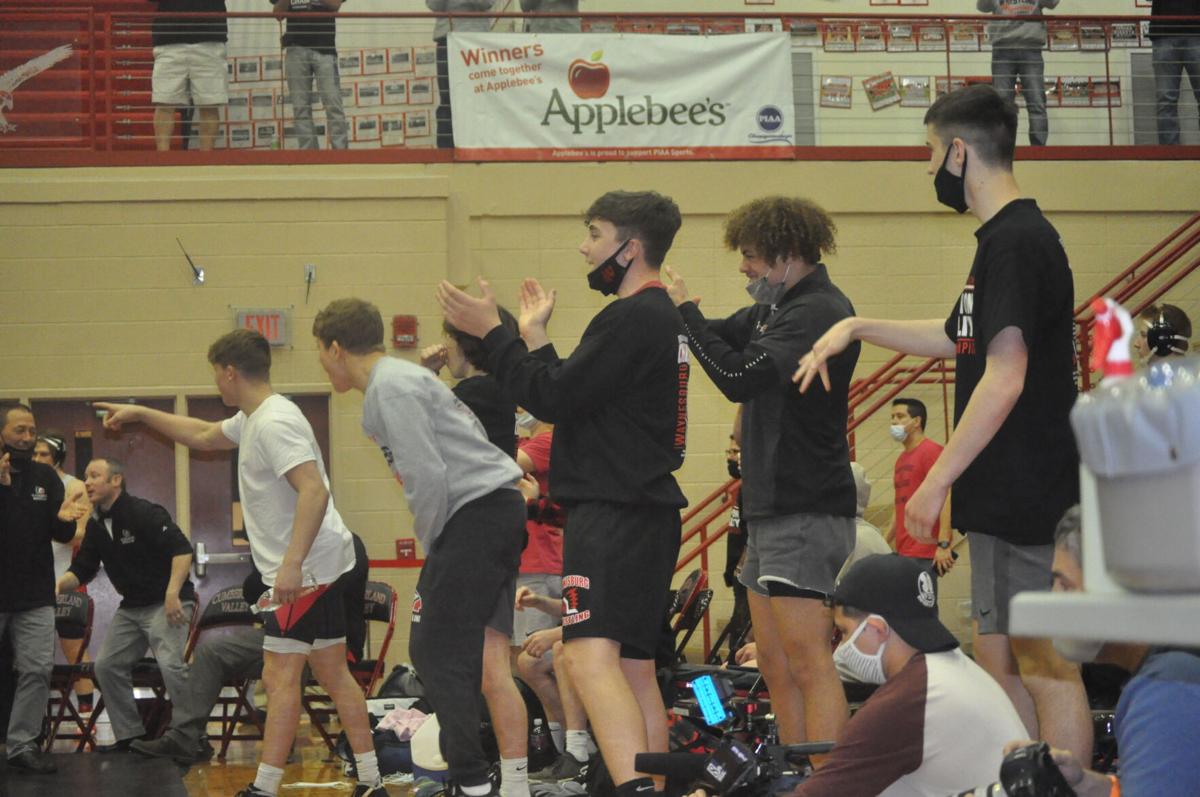 The Waynesburg bench is riled up about something Saturday in the PIAA Class AAA Team Tournament at Cumberland Valley High School. 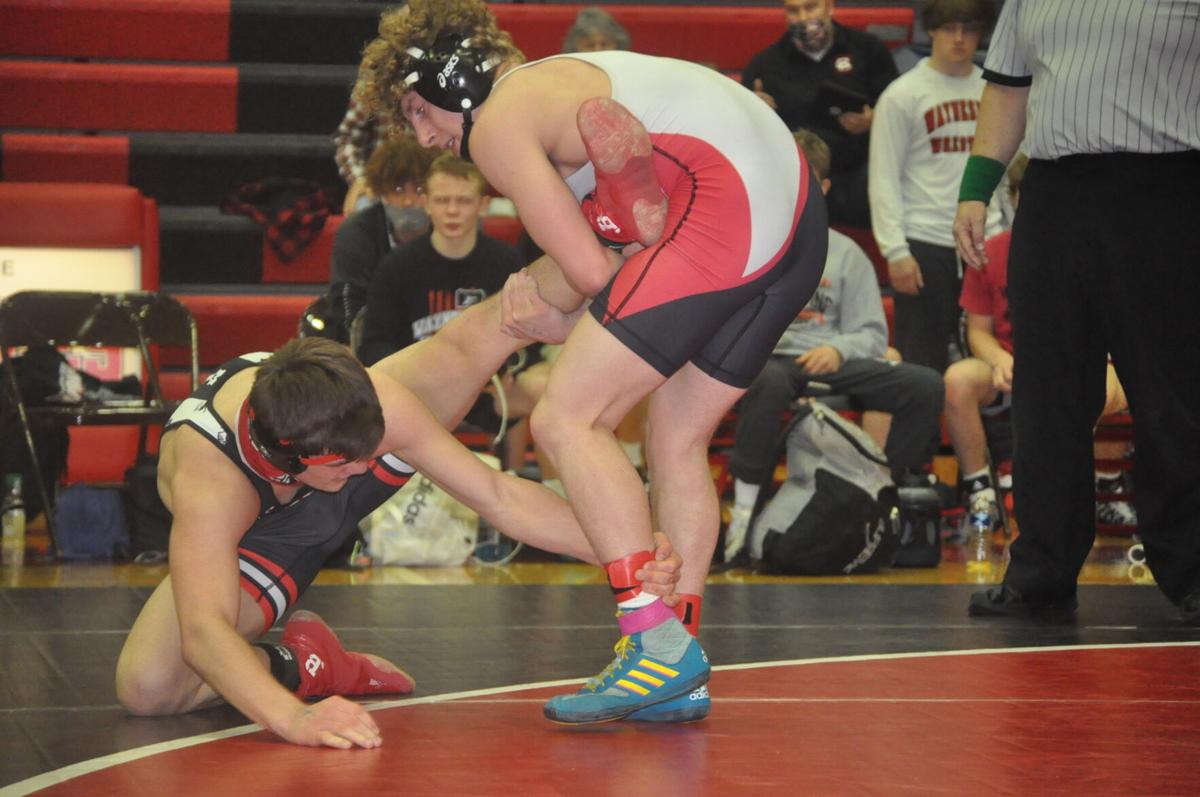 The Waynesburg bench is riled up about something Saturday in the PIAA Class AAA Team Tournament at Cumberland Valley High School.

HARRISBURG – It was the most entertaining blowout in this wrestling postseason.

And with it, maybe a new rivalry was hatched.

Waynesburg High School wrapped up the PIAA Class 3A Team Tournament title with a convincing 42-3 drubbing of Central Dauphin in the finals at Cumberland Valley High School Saturday.

Central Dauphin brought in a 19-0 record and couldn’t get on the scoreboard until the 11th match.

But to say it was a blowout and bad dual meet to watch would not be giving it the credit it was due.

“That was one of the loudest crowds we wrestled in front of all season,” said Waynesburg head coach Joe Throckmorton. “This was our last check mark. I’ve been saying it all year after last year’s loss in the finals. I knew it was going to be our goal a half hour after the match was over.”

Waynesburg earned a spot in the finals with a workmanlike 50-13 victory over Williamsport in the semifinals.

“This is huge for the program,” said Cole Homet, who won a 5-3 decision over Josh Miller at 138 pounds. “We only gave up three points. These are my brothers here and I like being with them.”

Waynesburg held Central Dauphin’s heart of the lineup to zero points. But that didn’t mean the bouts were overwhelming.

Mac Church arguably got the fans riled up after beating Matt Repos 2-1 at 126 pounds. The winning point came a technical violation for Repos fleeing the mat. The call brought boos from the fans, who reacted to every call after that.

Church didn’t help matters when he posed towards the Central Dauphin side of the gym after he won the match.

“It got a little chippy out there,” said Central Dauphin head coach Jeff Sweigart, whose team befell the same fate wrestling Canon-McMillan in 2012 and 2013. “But that’s wrestling. No one likes to lose.”

The Church win seemed to stir both crowds, who then took it out on the referees. Each questionable call after that brought coaches out of their seats and fans to their feet.

On a number of occasions, Throckmorton had to admonish his team when they left their seats. But he did it with a smile on his face.

“This shows how resilient we are,” said Throckmorton. “They are always figuring out ways to win.”

Colten Stoneking had a big pin that gave the Raiders a 19-0 lead. He stuck Michael Beers in 5:59.

That paved the way for Homet’s decision over Miller and two-time state champion Wyatt Henson 14-5 major decision over Ryan Garvick at 145 pounds. That gave Waynesburg a 22-0 lead.

“I feel that we should have had some more,” said Welsh of Waynesburg unsuccessfull trip to the team finals last year. “We should have more before me and Mac leave.”

Nate Stephenson followed Welsh’s win with a 6-0 decision over Wade McClune and Luca Augustine put the dual meet out of reach with a 25-10 technical fall over Ethan Pae at 5:58.

Afterwards, Augustine ended up with the first-place trophy. Safe to say it was in good hands. Besides, there wasn’t a boat or lake to toss it over.

“Someone just handed it to me and I kept it,” said Augustine, who won his first PIAA individual title two weeks ago in Hershey.

“I think we all went with the flow with this match. They started with a lot of energy and we tried to make that up.”

Heavyweight Ryan Howard showed a lot of emotion after a 4-1 victory over Ben Stewart. Howard, after being declared the winner, rushed to the sidelines and hoisted Throckmorton into the air.

“This means everything to me,” said Howard. “It makes all t he work I did worth it. It’s a good way to end my high school career. They wanted to win but we wanted to win. We wanted it a little bit more.”

When Cael Nasdeo decisioned Ky Szeweczyk to start the match at 106, Williamsport held a 3-0 lead.

It would be the only good thing to happen to the Millionaires the rest of the way.

Waynesburg got four pins and a technical fall to go along with a forfeit at 126 pounds to state champion Mac Church for a 50-13 rout of Williamsport in the semifinals of the PIAA Class 3A Team Tournament at Cumberland Valley High School.