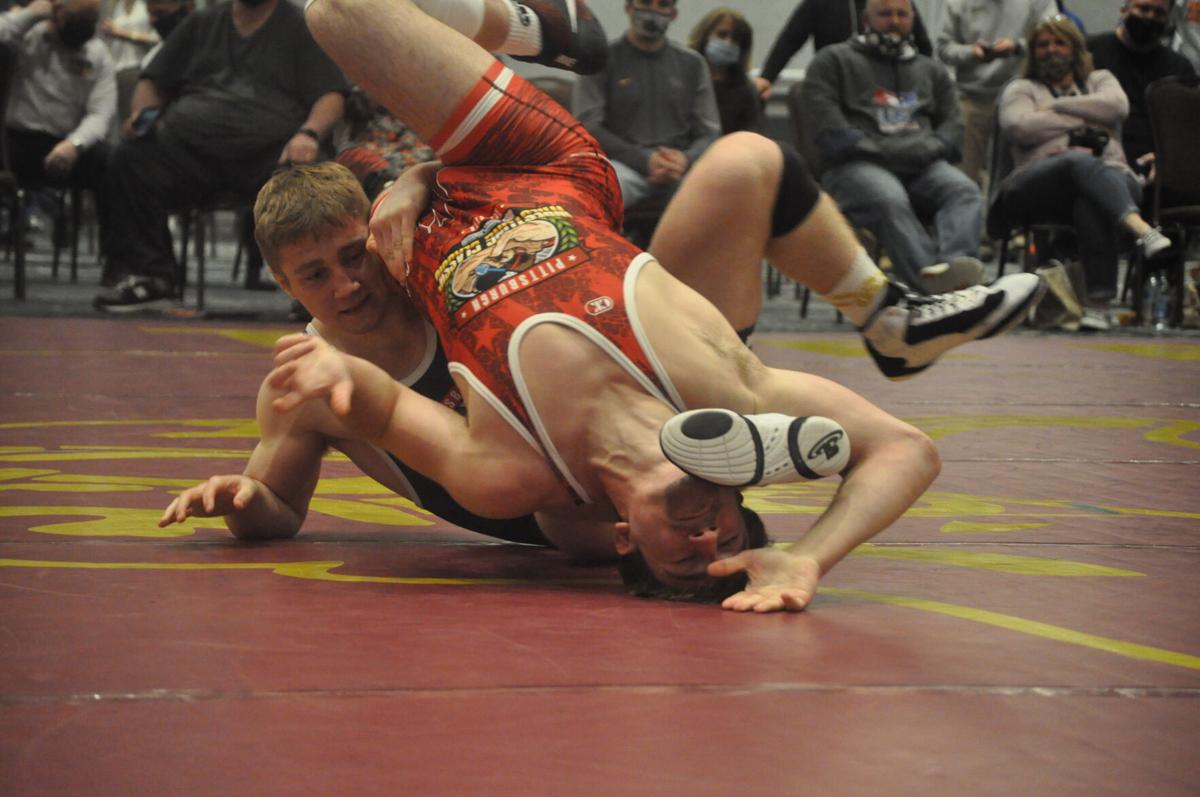 Luca Augustine of Waynesburg works on Dillion Walker of Cincinnati LaSalle during their 172-pound match in the Pittsburgh Wrestling Classic. 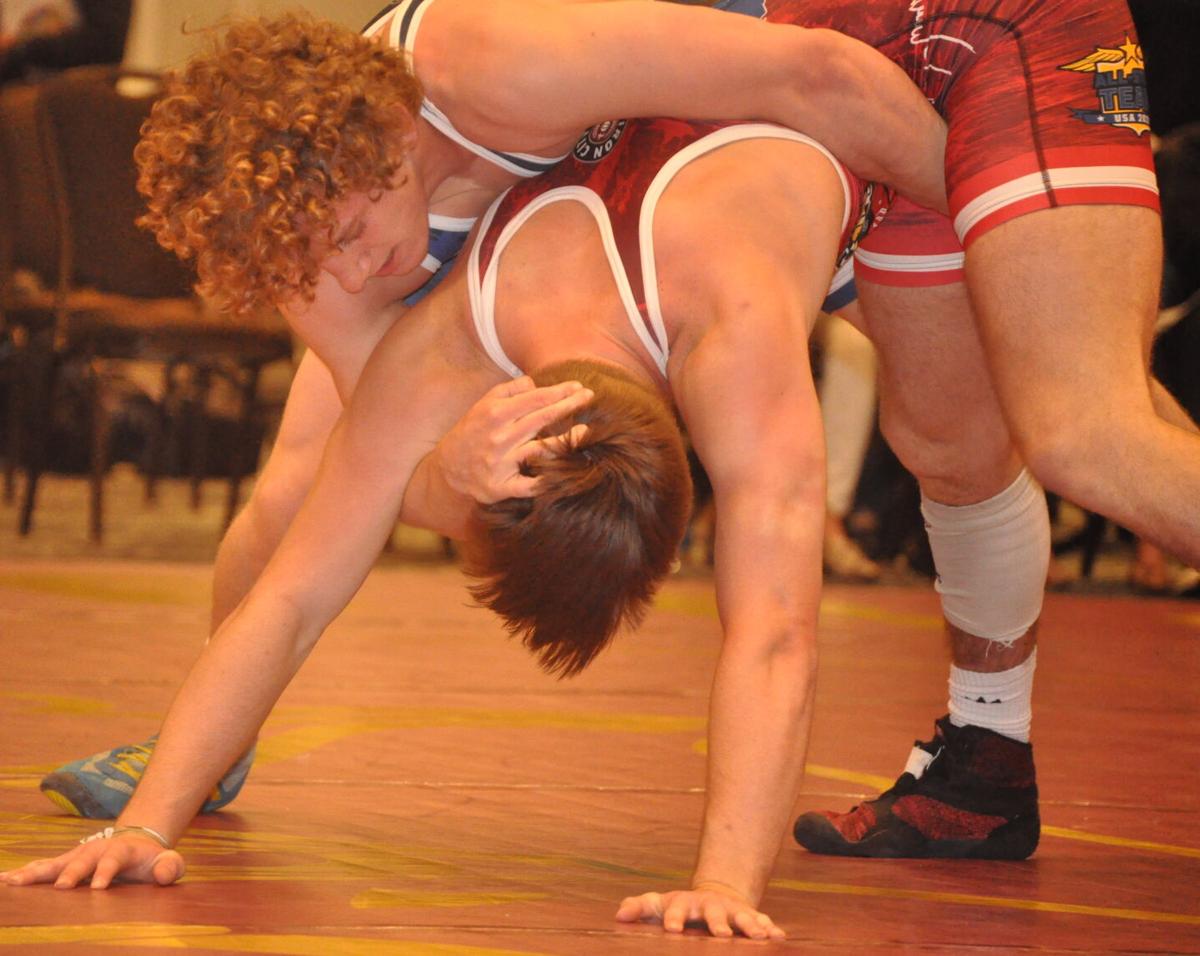 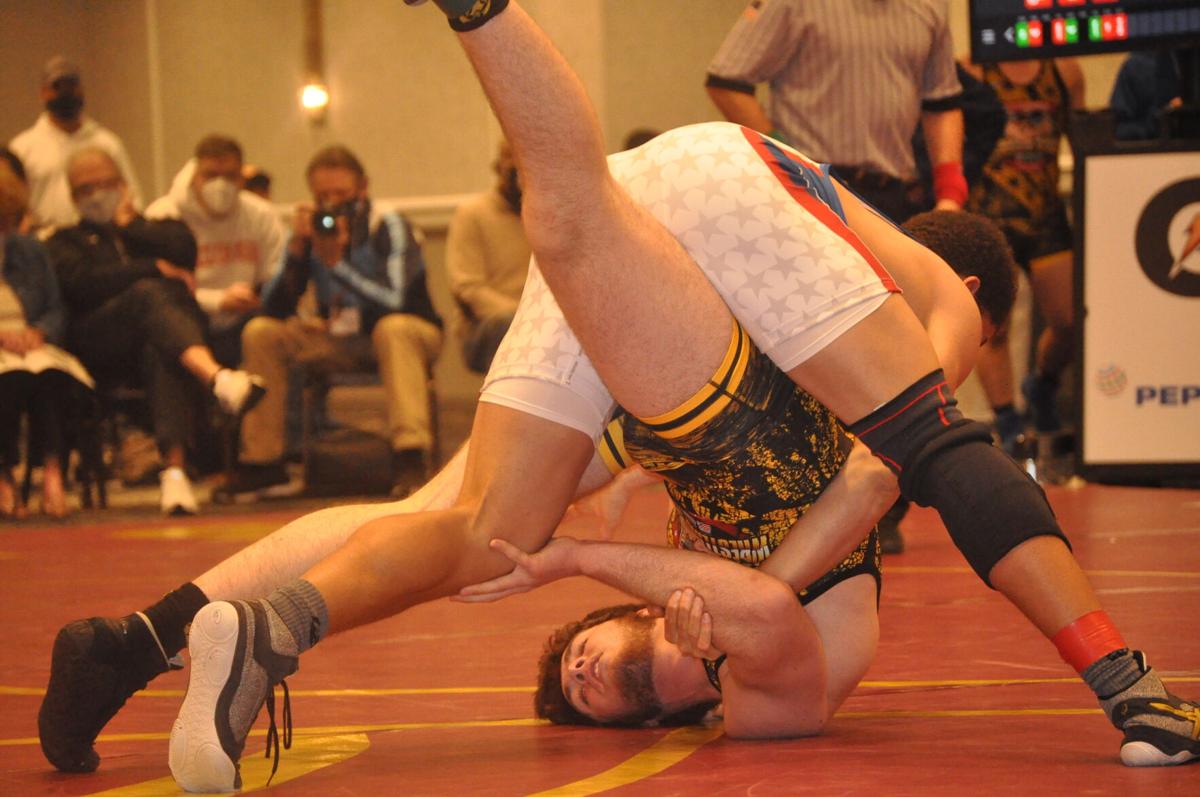 Tyler Rohaley, bottom, of Canon-McMillan is an a bad situation against Liam Kammer of Calvert Hill in their 195-pound bout.

Luca Augustine of Waynesburg works on Dillion Walker of Cincinnati LaSalle during their 172-pound match in the Pittsburgh Wrestling Classic.

Tyler Rohaley, bottom, of Canon-McMillan is an a bad situation against Liam Kammer of Calvert Hill in their 195-pound bout.

All that was on the line was the biggest wrestling match not held in Hershey.

And the good guys – in this case, the Pennsylvania team – was trailing, 23-18, with three dual meets remaining.

Fortunately for the good guys, the three remaining wrestlers were not only PIAA champions but two of them – Luca Augustine and Wyatt Henson – were from Waynesburg.

And coach Joe Throckmorton was not planning on losing his first dual meet of the season in the last, most distinguished, exhibition match of the year.

So three wins produced a 27-23 victory Friday night in the Pittsburgh Wrestling Classic and snapped an eight-match losing streak to the bad guys – in this case, the United States team.

“I don’t know if you can write this story at the beginning of the year and have it come out any better,” said Throckmorton, who led Waynesburg to two state team titles, a WPIAL team championship and an undefeated record.

“I told the guys we only got second place once and that was at Powerade. And the reason we got second place was because we held Luca out. I’m not losing a dual meet and it came down to Wyatt to win it.”

Henson went out with the Pennsylvania team holding a 24-23 lead. And he didn’t let the team down, coming away with a 3-2 decision over Caleb Rathjen of Ankney, Iowa, at 145 pounds. Rathjen and Henson, a two-time PIAA champion, will be teammates at Iowa next fall.

“I was a little nervous,” said Henson. “It’s awesome. It’s been a while since the Pennsylvania team has won a dual meet so this was awesome.”

Henson said he will celebrate with ice cream and a week off.

Augustine came away with a thrilling 5-3 decision in sudden victory over Dillon Walker of Cincinnati LaSalle, who won the 172-pound weight class at Powerade this year.

“When he took injury time to catch his breath, that’s when I knew I had him,” said Augustine, who is headed to Pitt next fall.

“It’s definitely not the match I wanted to wrestle. I could have done a lot better. I felt like I kind of rush that match. But it worked out well.”

Alejandro Herrera-Rondon of Seneca Valley won a 6-4 decision over Victor Voinovich of Brecksvile, Ohio, in between the wins by Augustine and Henson.

Oklahoma will be glad to get him next fall.

In the opener, the WPIAL snapped a two-match losing streak with a 41-6 victory over Maryland.

Tyler Rohaley, a senior from Canon-McMillan, was a late addition to the WPIAL lineup, replacing Justin Hart of Hampton who was on the WPIAL team but replaced Drew Clearie on the Pennsylvania team.

“They called me (Thursday) about 9:30 in the morning and my coach told me to put your wrestling shoes on. You’re going to be wrestling in the Classic,” said Rohaley, who has 75 wins, 57 by fall. “I said I’d be there. Wrestling at this level is special.”

Rohaley dropped a 6-1 decision to Liam Kammer of Calvert Hall High School in Timonium, Md., in a bout that was much closer than the score indicated. Rohaley trailed late in the match and gave up two back points at the buzzer.

Kammer had a 98-48 record in high school and was a state placewinner this year.

“It was a great time and an honor to be with those guys,” said Rohaley, who has not chosen a college yet.

Four new members were inducted into the Southwestern Pennsylvania Wrestling Hall of Fame between matches.