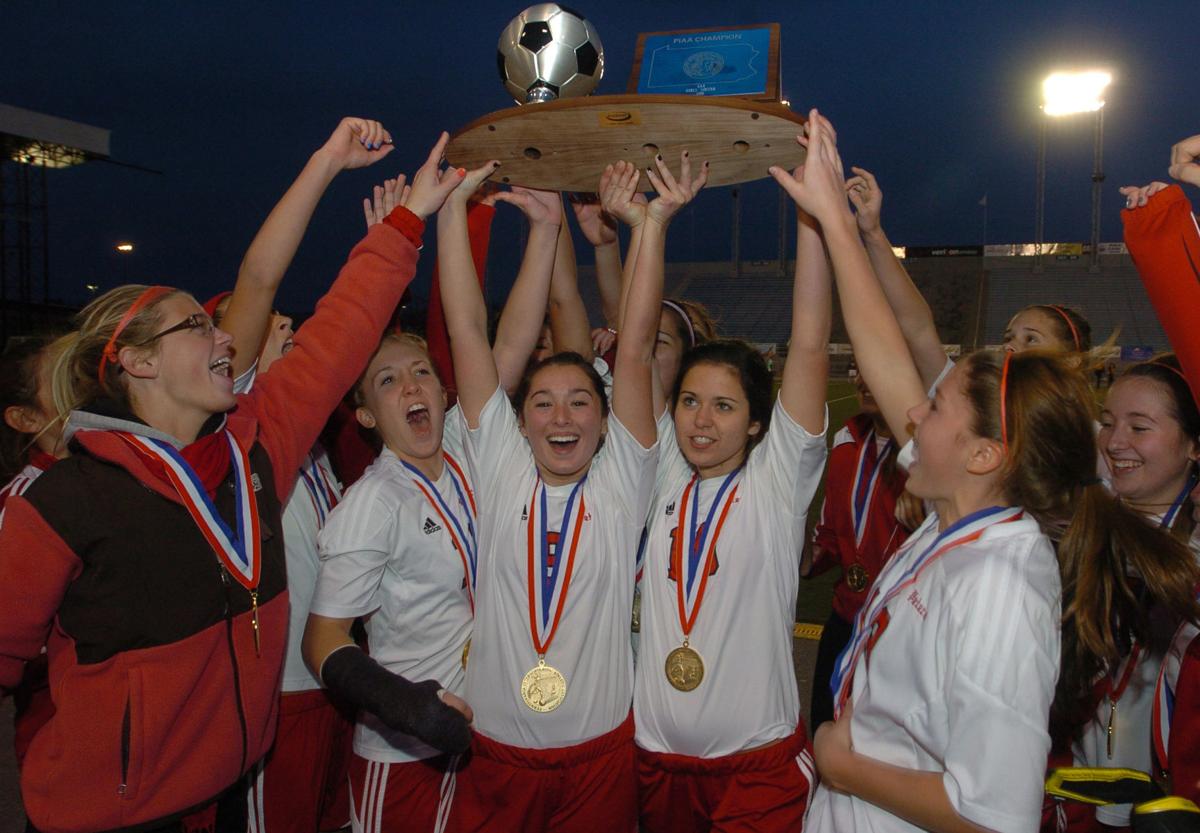 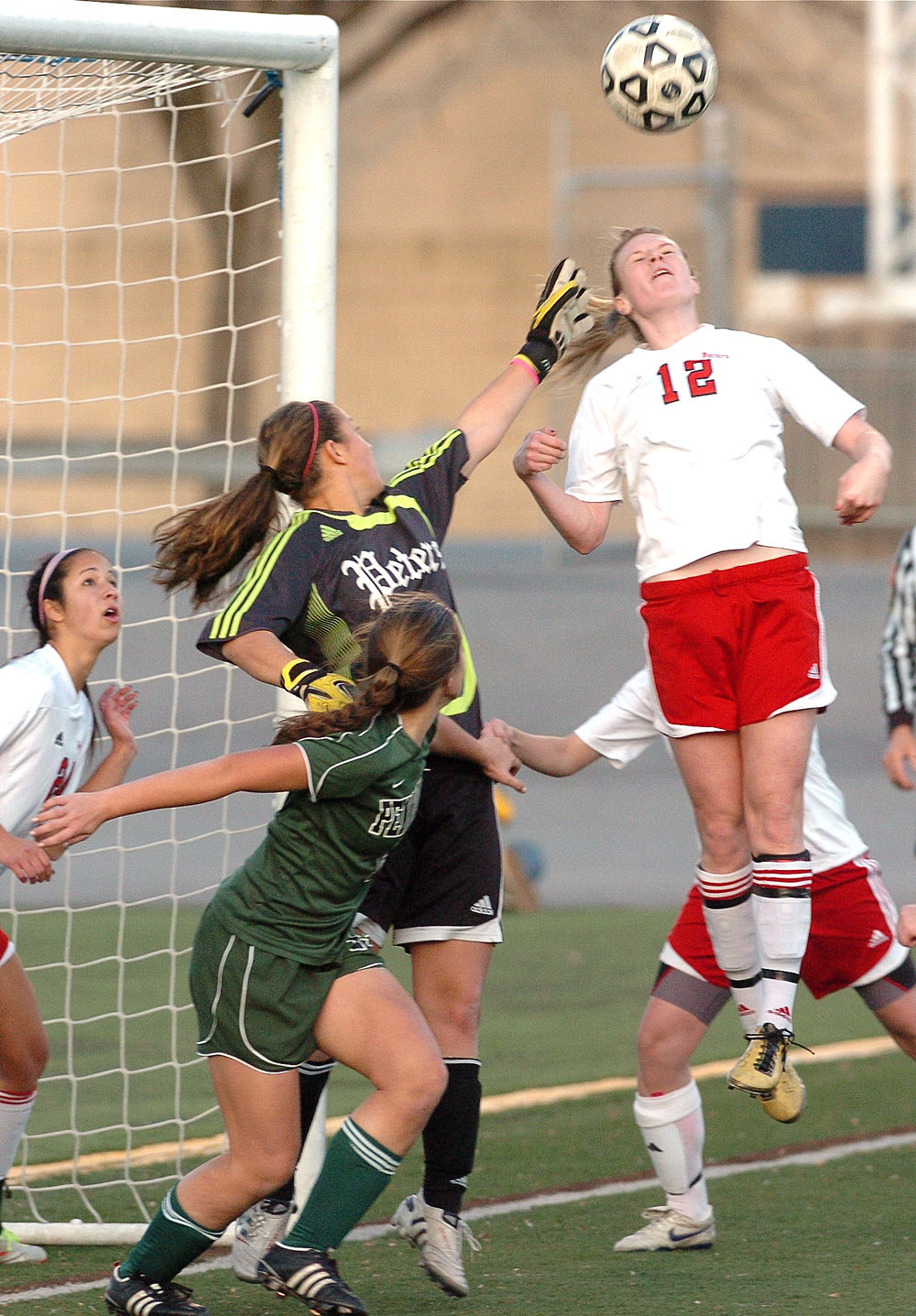 Peters Township High School’s Veronica Latsko (12) heads the ball away from the Indians’ goal during Pennridge’s unsuccessful corner kick. Latsko scored the only goal of the PIAA Class AAA championship game in 2011.

Peters Township High School’s Veronica Latsko (12) heads the ball away from the Indians’ goal during Pennridge’s unsuccessful corner kick. Latsko scored the only goal of the PIAA Class AAA championship game in 2011.

Today’s “When Sports Were Played” goes back to Nov. 19, 2011, when Peters Township’s girls soccer team won its second of a remarkable three consecutive state championships.

HERSHEY – It’s hard to believe, but there was a time, only a couple years ago, when Peters Township High School girls soccer was considered too soft to win the big one.

Following Saturday’s PIAA Class AAA championship match against Pennridge at Hersheypark Stadium, that tired label has been replaced by another.

And it’s one that no WPIAL girls soccer program can claim.

Peters Township, which erased a late two-goal deficit in its opening postseason match of the WPIAL playoffs, became the first team from District 7 to win back-to-back state championships with a hard-fought 1-0 victory over Pennridge.

“That (toughness) really defines this team,” said Peters Township coach Pat Vereb. “This team is young, and they’re blue-collar. The crazy thing is, we came very close to having our equipment packed up 20 days ago.”

Instead, Peters Township (20-3-1) left Hershey with another PIAA championship trophy – the third team title won by the Indians’ athletic programs over the last two years.

With a starting lineup filled with freshmen, sophomores and juniors, it’s tempting to say Peters Township will win a few more. Maybe there’s a dynasty in the making.

With players like sophomore striker Veronica Latsko, who flew to Florida via Harrisburg shortly after the game to join her Region I Olympic Development Program team, others are thinking what Vereb doesn’t want to say.

Latsko scored her 45th goal of the season in the championship, and it might be the most spectacular of her impressive two-year varsity career.

In the 29th minute, Latsko took a feed from freshman Laurel Carpenter and made a spirited run toward Pennridge goalie Ashley Schoellkopf.

Pennridge defenders Maggie Butcher and Julia Rufe sandwiched Latsko on the run for 20 yards, but neither made a play on the ball and neither could get ahead of the speedy Latsko.

“I was just trying to find a way to get the team up,” Latsko said. “As long as we could get one goal, with our defense, we thought we’d be OK.”

Latsko’s incredible individual effort continued as the two Pennridge defenders pulled on her jersey and tried to pry her off the ball.

“I figured if I couldn’t score, I’d at least draw a penalty kick,” Latsko said. “But you never know with penalty kicks. They’re nerve-wracking.”

Latsko maintained possession long enough to draw out Schoellkopf, and the shot, which might have been off the bottom of her right foot, went past Schoellkopf and inside the near post.

“The only time I’ve ever seen an effort like that was when Mario Lemiuex held off four defenders and scored a goal,” Vereb said. “She physically willed herself. It’s one of the best goals you’ll ever see, and to have it here at this stage is appropriate.”

A lot of work remained before Peters Township could join the girls tennis team as a 2011 PIAA champion. That work was up to the defense.

Latsko remained up front and made the occasional run at the Pennridge goal, but the Indians did not attempt a shot in the second half.

“That second half felt like a couple hours,” senior defender Brooke Smith said.

Pennridge (24-2), ranked No. 17 nationally by the National Soccer Coaches Association of America, attempted nine shots during the second half, three of them directly at Indians goalie Megan Parker, who made four saves and several other outstanding plays.

The Rams also attempted four corner kicks in the second half, each within a 10-minute span.

And all were taken by South Carolina recruit and corner kick specialist Megan Shenk.

“She could bend those corner kicks better than anyone I’ve seen,” Smith said. “One of them nearly went in, but Morgan Creehan was there to head it away. It was really stressful.”

But totally worth tolerating to make a little WPIAL history and add a sixth PIAA team championship trophy from Peters Township’s fall sports programs to the trophy case.

“Our goal was to win a state title but, no, I didn’t expect this to happen,” Latsko said. “We hoped it would happen and, somehow, it did. It’s an unbelievable feeling to be part of such a great team.”