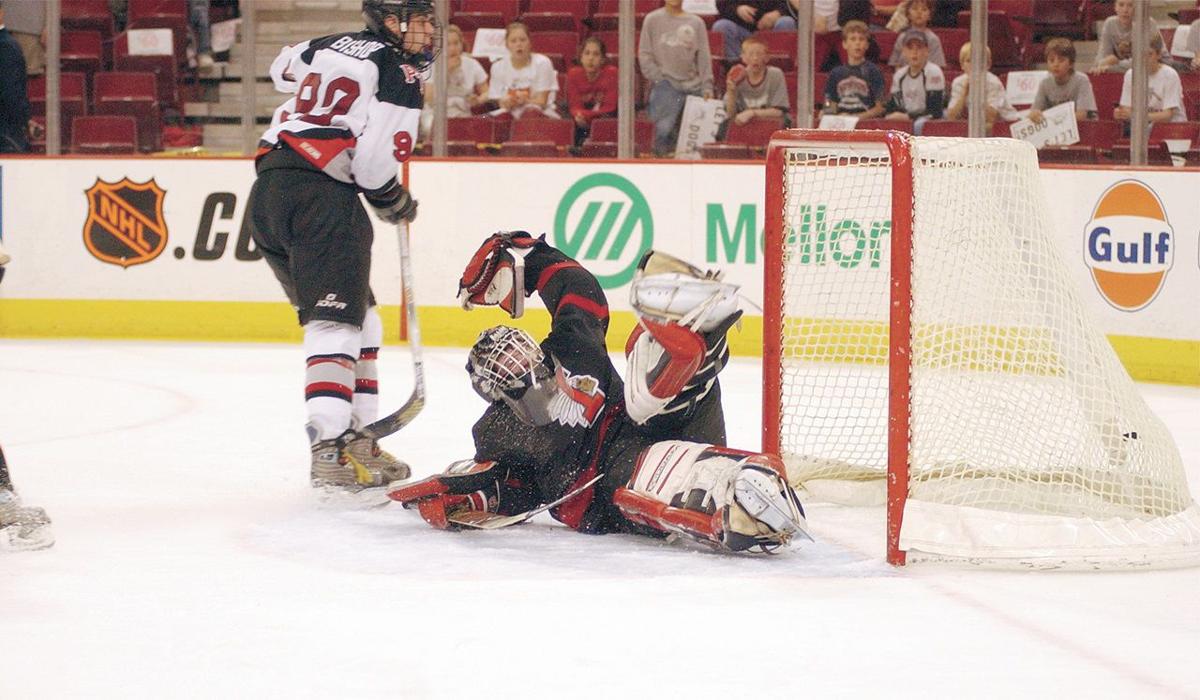 Si Bishop watches his shot get past Indiana goaltender Mike Mentch in overtime of the Penguin Cup final at Mellon Arena on March 28, 2004. 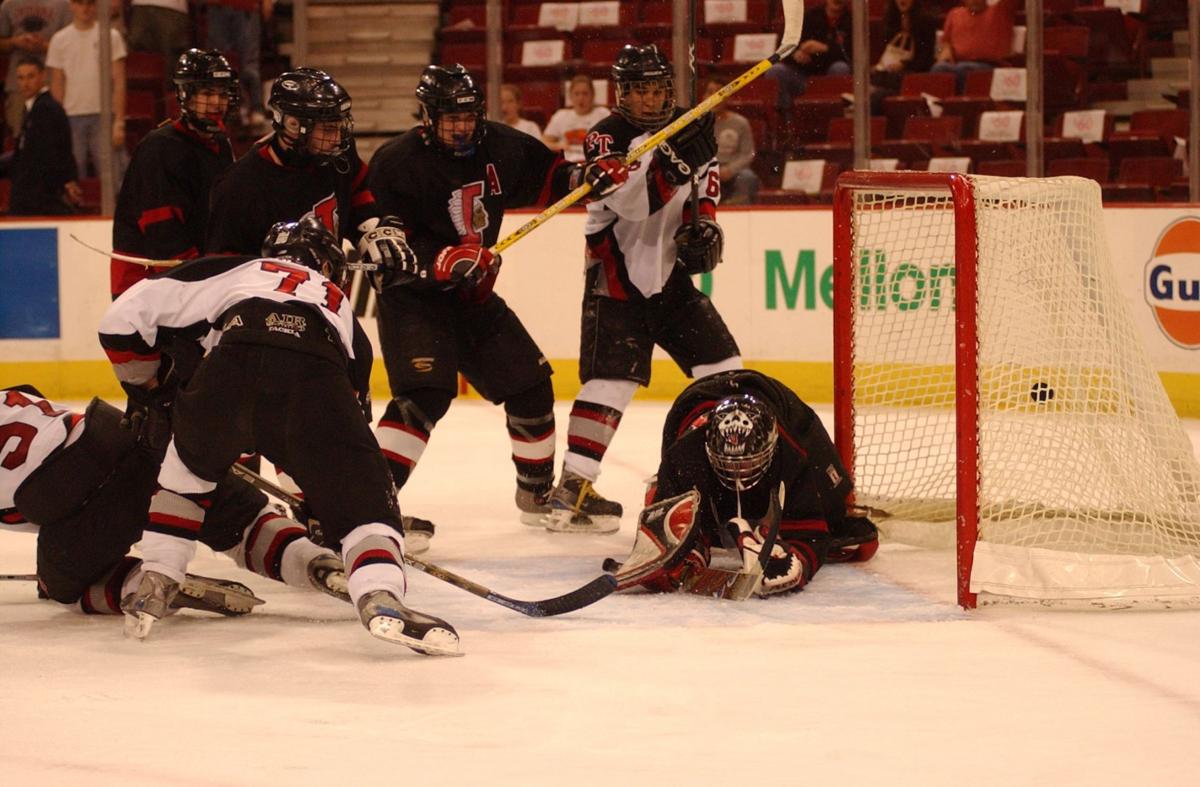 Peters Township’s Kevin Kustron (71) chips the puck over Indiana goaltender Mike Mentch and into the net with 6.8 seconds remaining in the third period. The goal forced overtime in the 2004 PT Penguin Cup. Peters Township won the game on a goal by Si Bishop early in overtime.

Si Bishop watches his shot get past Indiana goaltender Mike Mentch in overtime of the Penguin Cup final at Mellon Arena on March 28, 2004.

Peters Township’s Kevin Kustron (71) chips the puck over Indiana goaltender Mike Mentch and into the net with 6.8 seconds remaining in the third period. The goal forced overtime in the 2004 PT Penguin Cup. Peters Township won the game on a goal by Si Bishop early in overtime.

In this “When Sports Were Played,” we go back exactly 16 years, to March 28, 2004, when Peters Township’s hockey team used a remarkable comeback to win the Penguin Cup.

Indiana had just taken a two-goal lead early in the third period with a power play goal 15 seconds after Bishop took an admittedly “stupid penalty,” and PT’s run at a third straight Penguin Cup was all but over.

And the senior winger felt it was all his fault.

“I went down and sat on the bench and I almost started crying,” Bishop said. “I just lost the Penguin Cup for our team.”

Not quite. About 30 minutes later, Bishop found himself at the bottom of a PT pile-on, having just won the Penguin Cup for his team.

Bishop capped a stunning comeback, scoring on a breakaway 3:04 into overtime as Peters Township won its third straight PIHL Class AA championship with a remarkable 5-4 victory over Indiana. The Indians will go for their third straight state title when they play Flyers Cup champion Archbishop Carroll on April 10 at Island Sports Center.

“Unbelievable,” Bishop said. “I don’t even know what to say.”

Peters Township scored twice in the final 6:23, including Kevin Kustron’s game-tying stuff-in with only 6.8 seconds left in regulation.

“That’s as big a goal as I’ve ever scored, definitely,” said Kustron, who scored two goals.

“That was the killer,” said Chris Clackson, who had the primary assist on PT’s last three goals.

In the two-minute intermission that followed Kustron’s goal, the Indiana players were despondent. Some skated aimlessly about the ice, a few others had their heads in their gloves, and the rest leaned their chins on the butts of their sticks with a blank expression on their faces.

Meanwhile, about 20 feet over, the PT players were jumping up and down, pumping their fists and screaming at the top of their lungs while head coach Mark Cooper tried to maintain some semblance of order.

“We had so much momentum, everyone’s blood was pumping, and Indiana’s heads just went down,” Kustron said. “We knew it was our game to win.”

And it didn’t take long. PT came out flying in overtime, dominating from the start and holding Indiana without a shot.

Bishop’s game-winning goal was a product of two high-arching passes. First, goaltender Rob Madore (23 saves) flung the puck forward, where it was gloved by Clackson. The moment Bishop saw Clackson grab the puck, he dashed ahead, getting well behind the Indiana defense.

He’s not ashamed to admit he was cherry-picking.

Clackson lofted the puck high into the air across both blue lines, but it tipped off Bishop’s glove and landed several feet ahead of him in the slot. Bishop didn’t think he could catch up in time to get a shot off.

“I’m not the fastest guy in the world,” he said. “I didn’t think there was a chance in hell I was going to score that goal.”

But Bishop gained control about four feet in front of the crease, and immediately roofed a forehand past Indiana goaltender Mike Mentch (19 saves), triggering a wild celebration along the boards.

And nobody in that mob scene was happier – or more relieved – than Bishop.

“I’ve been on all three championship teams, and this is the most special team,” he said. “I didn’t want to let these guys down. I felt terrible after that penalty.”

That PT won its third straight Penguin Cup is hardly surprising. But the manner in which the Indians did it was. They looked lost for the first two periods, as Indiana took a 3-1 lead on three breakaway goals, two from Michael Nesper and one shorthanded.

PT had just two shots in the first period, and only Kustron’s goal late in the second to hang its hat on. Clackson said PT took the game for granted, because top-seeded Thomas Jefferson was out of the picture, bounced in overtime by Indiana in the semifinals.

“We didn’t come to play,” Clackson said. “It wasn’t TJ, so we thought we’d be all right. But Indiana came to play and they dominated.”

In the second intermission, Cooper ripped into his players, trying to motivate them to come back.

PT took Cooper’s words to heart, and dominated play in the third. Dustin Roux scored at 4:25 of the third to make it 3-2, but Cory Mills’ second goal of the game – scored while Bishop was in the penalty box – seemed to seal PT’s fate.

But PT kept battling, and Roux scored again on a weak forehand from a sharp angle that handcuffed Mentch, setting up the game’s thrilling conclusion.

Bishop, a grinder and enforcer on PT’s top line, doesn’t consider himself a goal-scorer. But he’ll go down as scoring one of the biggest goals in PT history.

“We’ve had some unbelievable players come through here,” Bishop said. “I don’t think I’ll ever be mentioned in a sentence with Christian Hanson, Matt Clackson or Christiaan Minella. But I hope people remember this. This is special.”