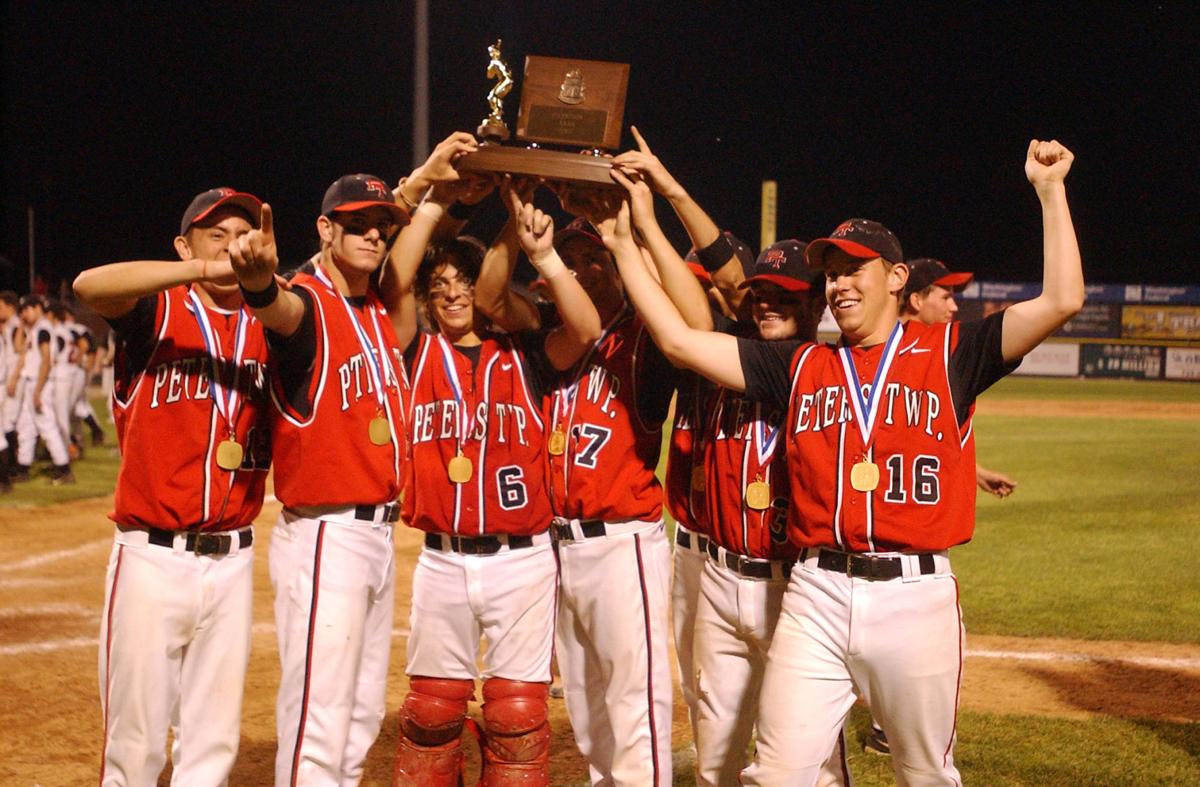 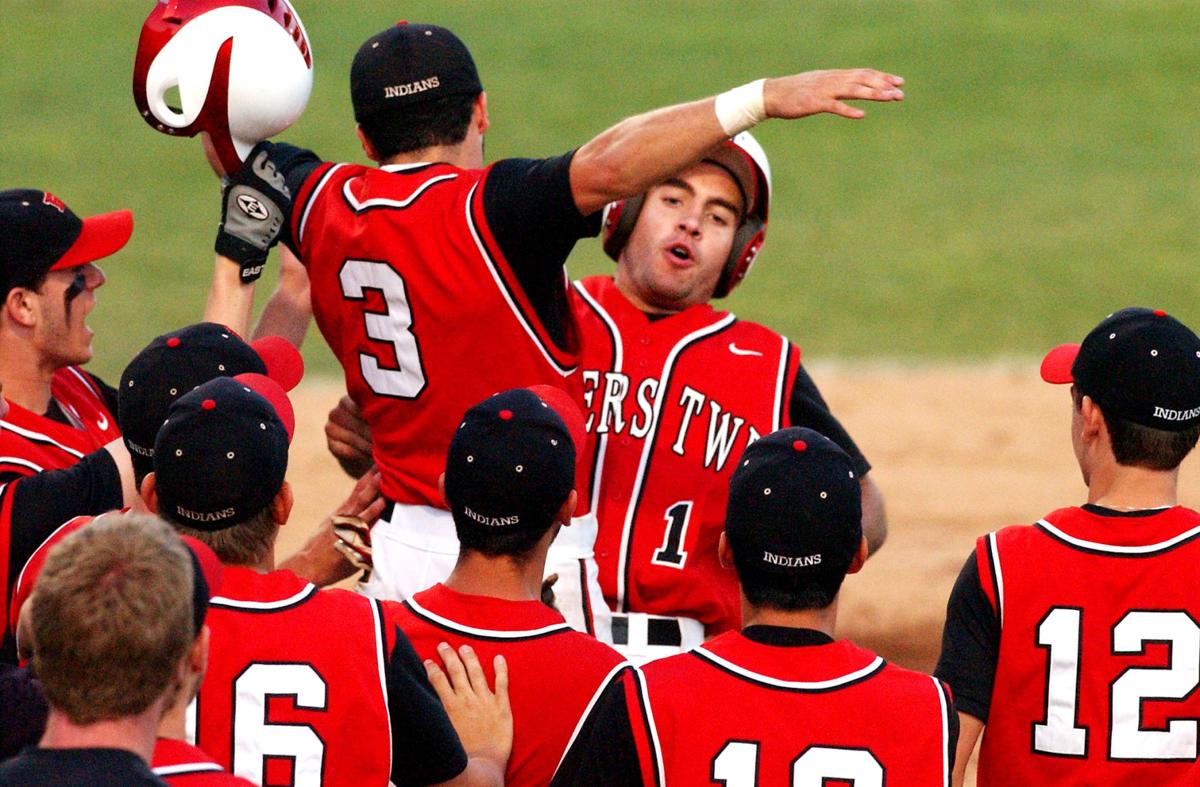 Pat Gallagher of Peters Township High School is mobbed by teammates as he crosses home plate after hitting a solo home run in the third inning of the 2007 WPIAL Class AAAA baseball championship game. The Indians defeated Bethel Park High School 12-0 on May 29, 2007.

Pat Gallagher of Peters Township High School is mobbed by teammates as he crosses home plate after hitting a solo home run in the third inning of the 2007 WPIAL Class AAAA baseball championship game. The Indians defeated Bethel Park High School 12-0 on May 29, 2007.

This edition of “When Sports Were Played” takes us back exactly 13 years, to May 29, 2007, and the WPIAL baseball championship game between Peters Township and Bethel Park.

Pat Gallagher and Aaron Maize might not be the most feared hitters in the Peters Township lineup, but then the Indians aren’t a typical high school baseball team.

And Tuesday night on a massive stage, Peters Township showed how powerful it can be when all nine find ways to contribute.

Some teams say they hit one through nine; the Indians proved it again during Tuesday night’s WPIAL Class AAAA championship game against Section 3 rival Bethel Park at Consol Energy Park.

Gallagher and Maize provided two of the biggest hits in Peters Township postseason history off Bethel Park ace Andy Kountz before the rest of the batting order unleashed its barrage. Meanwhile, unheralded righty Nick Merich pitched a five-hitter as Peters Township won its first WPIAL title with a 12-0 victory in six innings as an estimated crowd of 2,100 watched.

“I’m not surprised by the score. I know how good we can be,” Gallagher said. “Bethel Park is one of the best teams in the WPIAL but this was our night.”

Peters Township (20-4) will play City League champion Brashear Monday, June 4 in the first round of the PIAA tournament. A site and time will be determined.

The Indians would like to put in a request for Consol Energy Park. They’ve yet to lose here in five games.

“We’ll play here any round, any time,” said Peters Township coach Joe Maize, who is in his 21st year.

And the way the Indians pounded the Black Hawks – 11 hits, one home run, three triples and two doubles – they don’t care who they play.

Heck, they may even see Bethel Park (16-6) again. The two have met four times, with each winning two.

None was this thorough.

“This is the best game we’ve played all year,” Aaron Maize said. “It’s great to be able to do it here.”

They also did it against one of the best pitchers in the WPIAL.

Kountz (7-1) pitched 2 2/3 innings of no-hit baseball before Gallagher belted the first pitch he saw in the at-bat over the right field wall. It was Gallagher’s first home run.

“I was looking for a fastball but he hung a curve. It was the perfect pitch for a lefty to hit,” Gallagher said. “When I hit it, I didn’t think it was gone but it was the best feeling ever to run those bases and get us going.”

Aaron Maize kept it going in the fourth.

He crushed a key two-run double off the left field wall in the fourth. It opened up a 3-0 lead for Peters Township and would be plenty of offense for Merich (9-1).

“It’s definitely a lot easier when they get me 12 runs,” said Merich, who entered the game with a 1.24 ERA. “After Pat hit that home run, I came out with more confidence. When we got to three runs, I thought we’d be OK.”

Bethel Park loaded the bases on Merich with two outs in the first but he got Ed Kessler to fly out to center field. After that, Merich allowed just three hits.

“Pat and Aaron really gave us a big boost and with the way we play defense, and the way Nick pitches,” Joe Maize said. “(Merich) is the most underrated kid around. He’s 9-1 and no one’s worked harder.”

It took 24 games, but Peters Township hasn’t hit the ball this hard, either.

Jim Rider’s RBI-single highlighted a two-run fifth. Then, with a 5-0, the Indians put the game away in the sixth against Black Hawks reliever Casey Del Percio.

After Aaron Maize walked and stole second, one of four stolen bases for the Indians, A.J. Sherer hit the first of three triples. Gallagher, who went 3-for-4 with two RBI, followed with a run-scoring single and Pete Ross hit a two-run triple. Rider also tripled and he scored on a Jordan Jankowski double.

All nine players in the batting order scored at least one run. Seven of the nine had a base hit.

“I told these guys that it was going to be scary when they start hitting the ball like I know they can and start hitting as a team.”