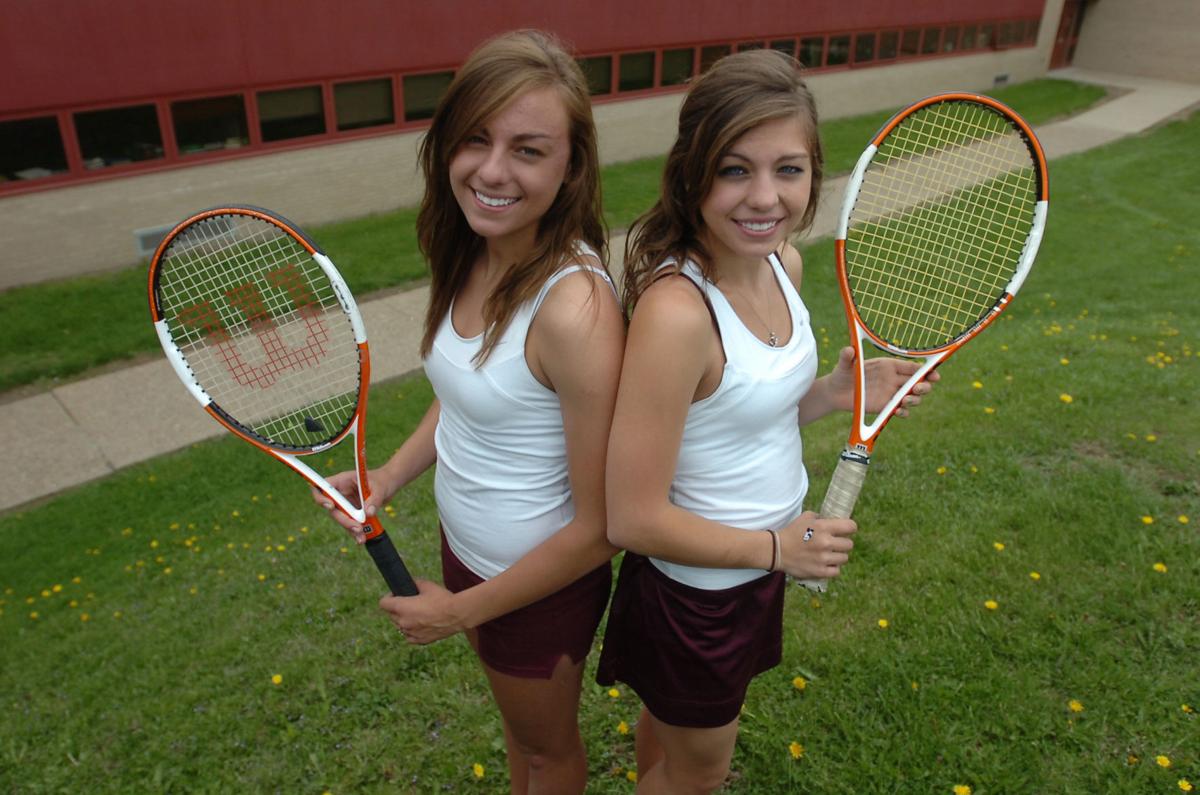 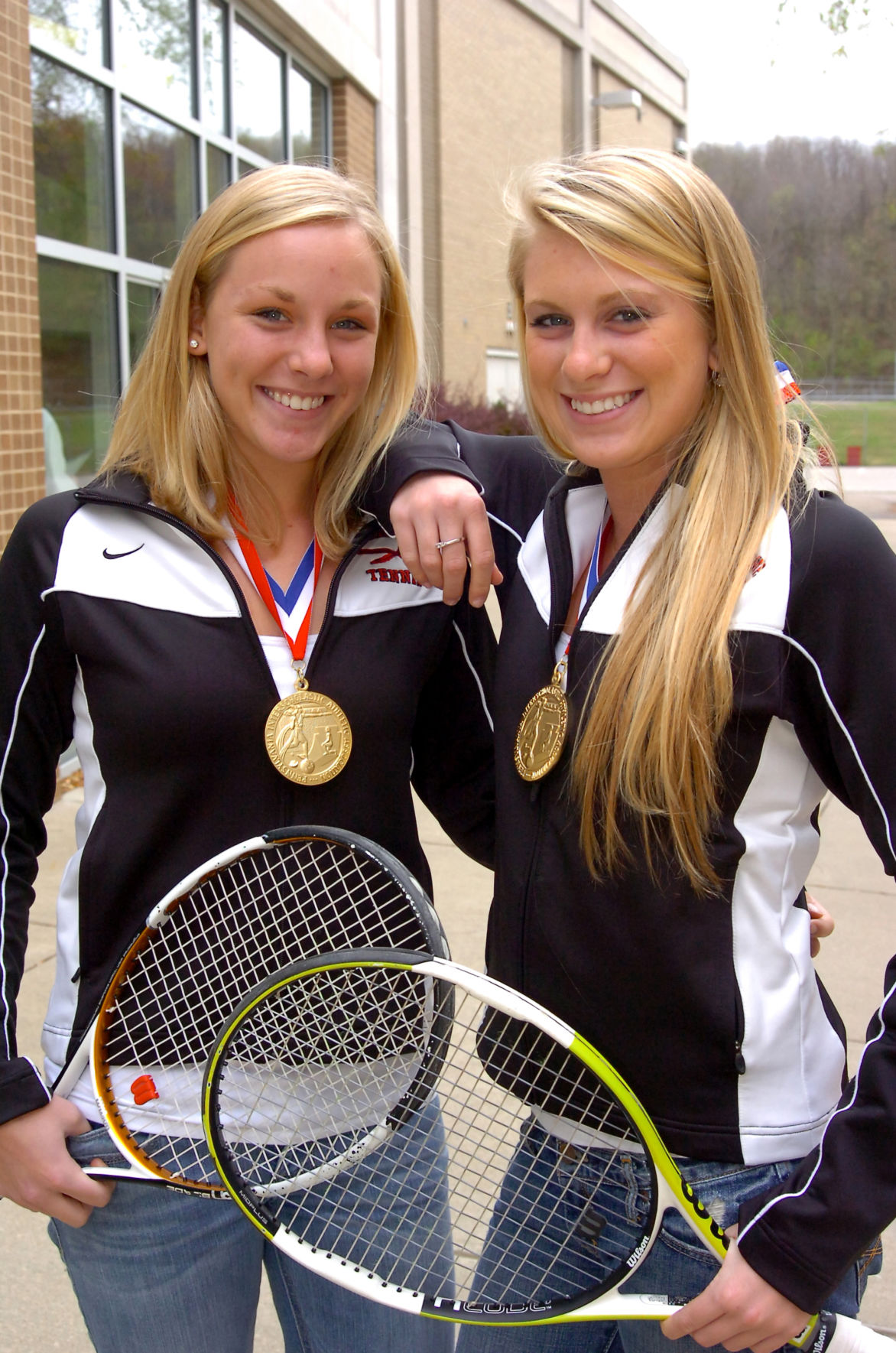 Julie Stroyne, left, and Emily Palko of Peters Township High School avenged a loss in the WPIAL finals by defeating a team from North Allegheny to win the PIAA Class AAA doubles championships in 2007. Stroyne and Palko won gold medals for the second time.

Julie Stroyne, left, and Emily Palko of Peters Township High School avenged a loss in the WPIAL finals by defeating a team from North Allegheny to win the PIAA Class AAA doubles championships in 2007. Stroyne and Palko won gold medals for the second time.

The local area has never been known as a hotbed for high school tennis, but in today’s “When Sports Were Played” we revisit it’s high-water mark, Nov. 3, 2007, when two girls doubles teams each won PIAA championships.

Chartiers-Houston High School’s Karli and Tanya Timko couldn’t be more different. Maybe that’s what makes them so good together.

Karli Timko, a junior, is the more hyper of the two. Tanya Timko, a freshman, is more serious and businesslike.

They’re polar opposites, but their talents combined on the tennis court are unmatched.

The Timkos followed up their impressive victory in the WPIAL doubles championships by coasting through the first three rounds of the PIAA Class AA tournament. In the finals, they overcame some adversity and claimed state gold by defeating the defending champions, Rebecca Haener and Griffin Currie of Mercyhurst Prep, 6-2, 7-5 Saturday at the Hershey Racquet Club.

The Timkos weren’t the only local tennis doubles team to win a PIAA championship Saturday.

“I can’t put it into words,” said Karli Timko. “It’s amazing. We didn’t know what to expect, so we just did what we know to do.”

“We let a couple match points get away,” said Karli Timko. “I think it finally hit us that we were in the state final. But then we said, enough of this.”

The championship point was a backhand lob by Karli Timko, who didn’t hit the ball as well as she wanted. But it fell just inside the line and behind Haener and Currie.

“I couldn’t believe she made that shot,” said Tanya Timko, who served the final game. “My serve wasn’t that great. I just wanted to get the ball in.”

When the ball landed in, Tanya Timko, normally calm and stoic, let the emotions get to her. With tears streaming down her face, she ran to give her sister a hug.

“I was overwhelmed,” Tanya Timko said. “I might not be able to experience this again. I have to cherish it.”

“We’ve definitely grown together,” said Karli Timko. “We were close before, but this really pulled us together.”

Stroyne and Palko avenged their loss in the final of the WPIAL tournament to Whelan and Larimore.

“Today was a fun day,” said Stroyne, a sophomore. “Last year (in the team tournament) there was a lot more pressure because you didn’t know how the other side was doing.”

Unlike the Timkos, Stroyne and Palko have been in this position before. The two helped the Indians win the state team tournament last year. In that event, Stroyne defeated Lower Merion’s Kristen Roth in the semifinals. Palko played Devi Jadeja but lost.

Those four players met again when Stroyne and Palko played Roth-Jadeja in the semifinals Saturday. The Peters Township duo came away 6-3, 6-2 victors.

“It was so nerve-racking because I had lost last year,” Palko added. “The finals were a little tougher because of the pressure, but we were most concerned with (Roth and Jedija) because they were the top seed.”

Any gold medal victory is special, but for Palko, this was more than just a gold medal. She is best friends with Stroyne and her sister Kaitlyn, to the point where Sandy Stroyne considers Palko an adopted daughter.

Palko is also a senior and closed out her varsity career with the victory.

“I couldn’t have picked a better partner,” said Palko. “We know each other inside and out. It’s awesome. I wouldn’t want to go out any other way.”

“I’m so happy for Emily,” Stroyne added. “We consider her part of the family.”