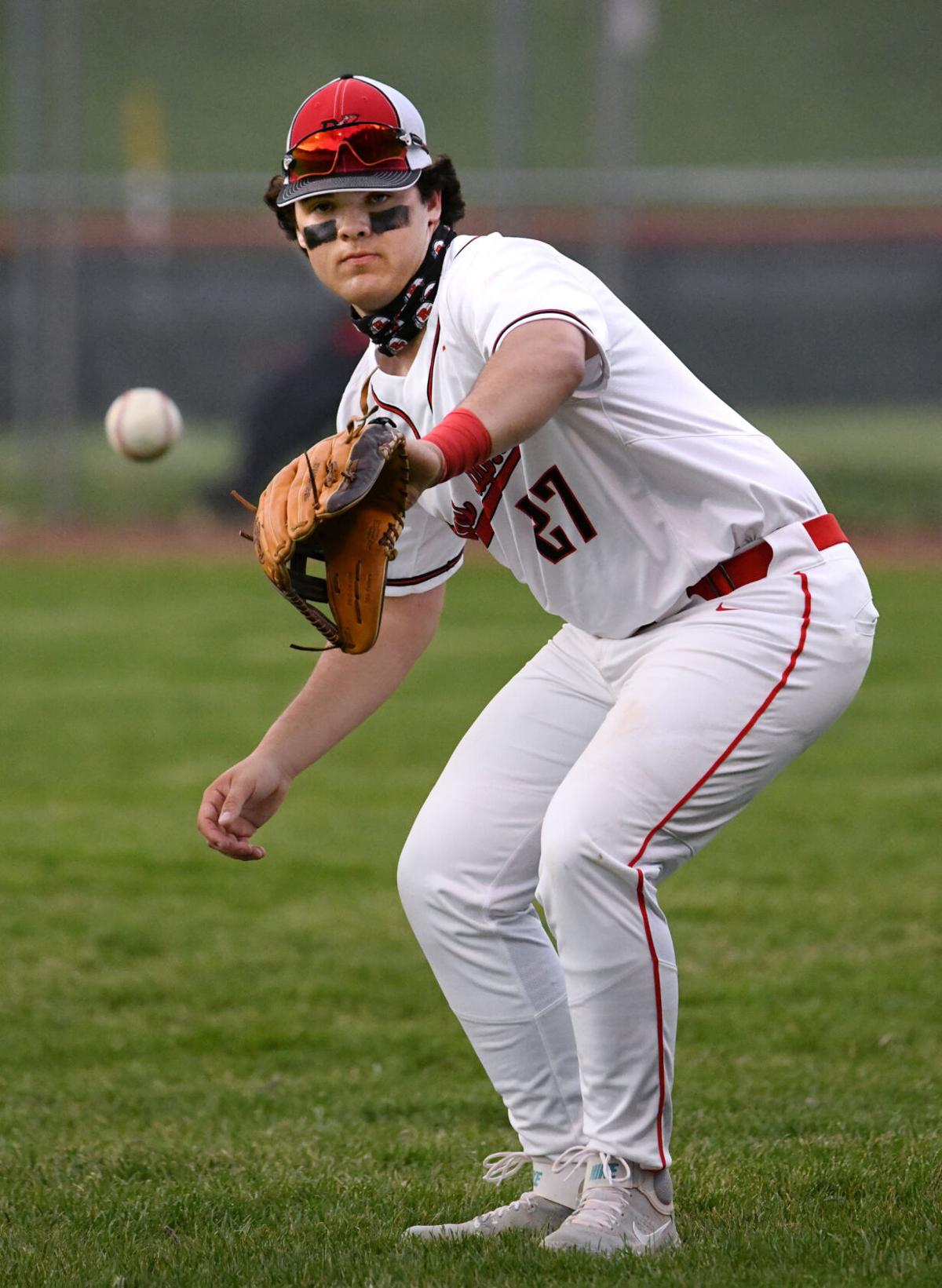 Peters Township’s Drew Ripepi is a multiposition player and a recruit of Pitt. 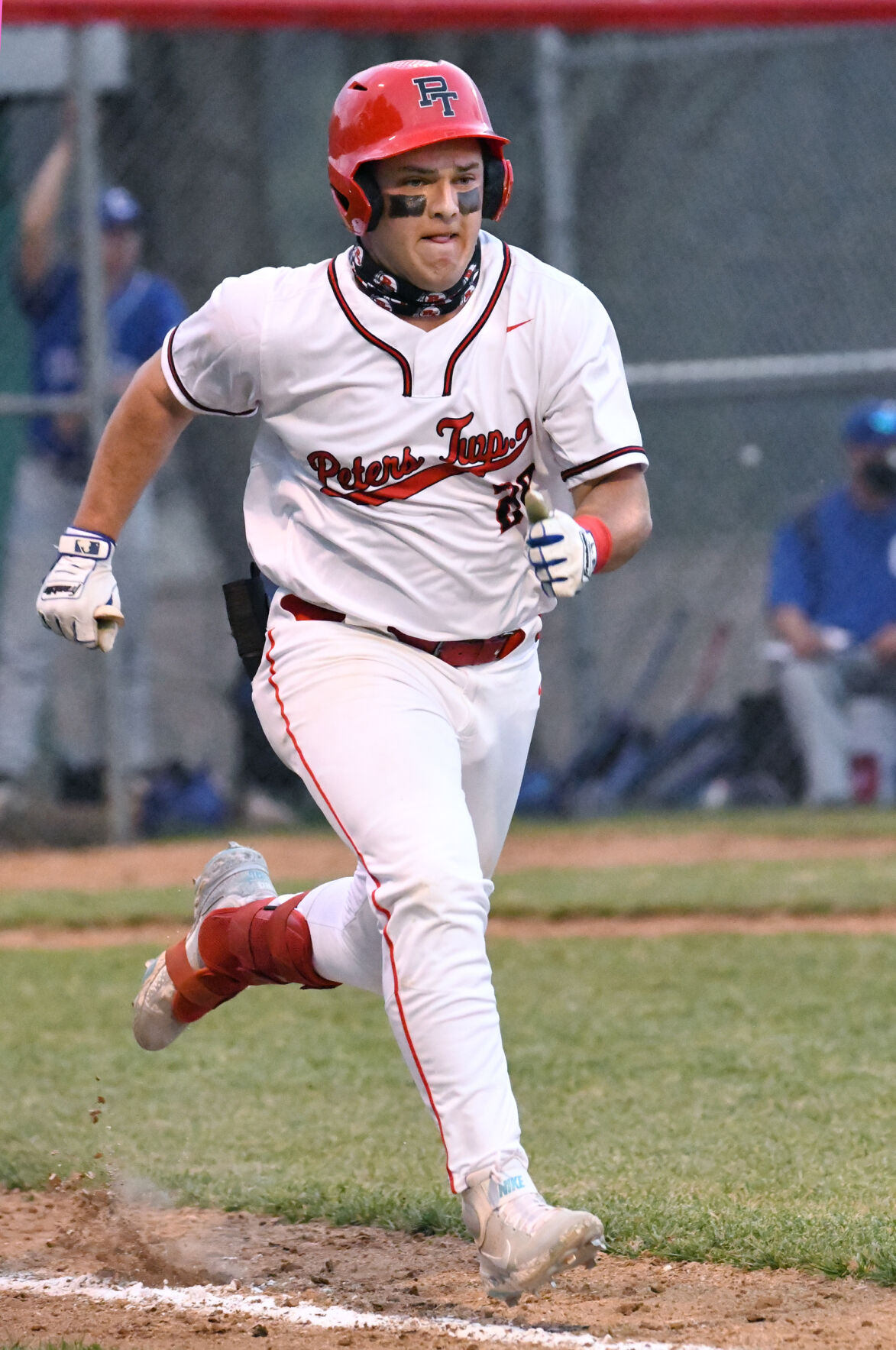 Peters Township’s Drew Ripepi will be sprinting to play for Pitt. he is one of eight Division I baseball recruits playing at local high schools this spring. 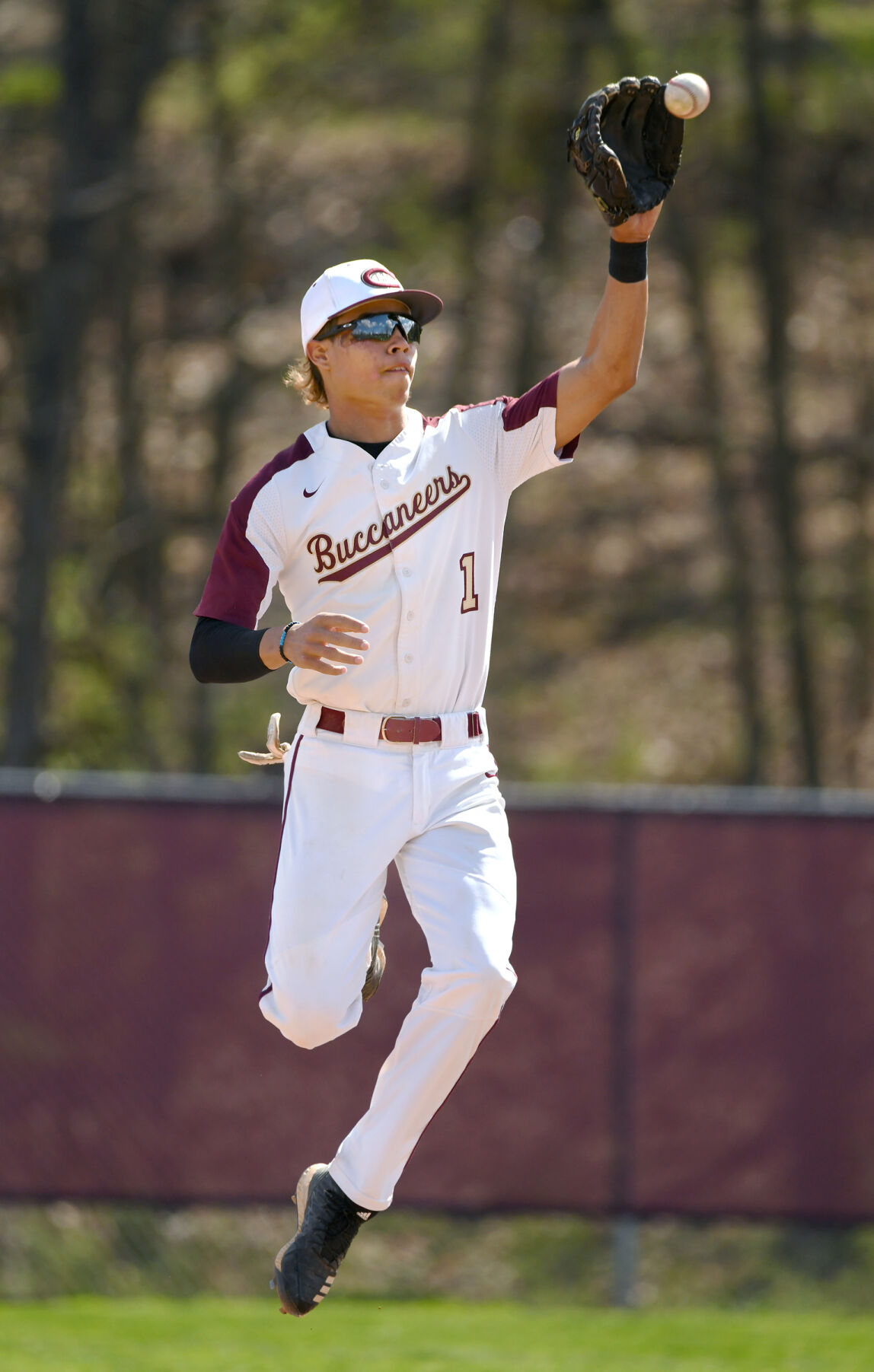 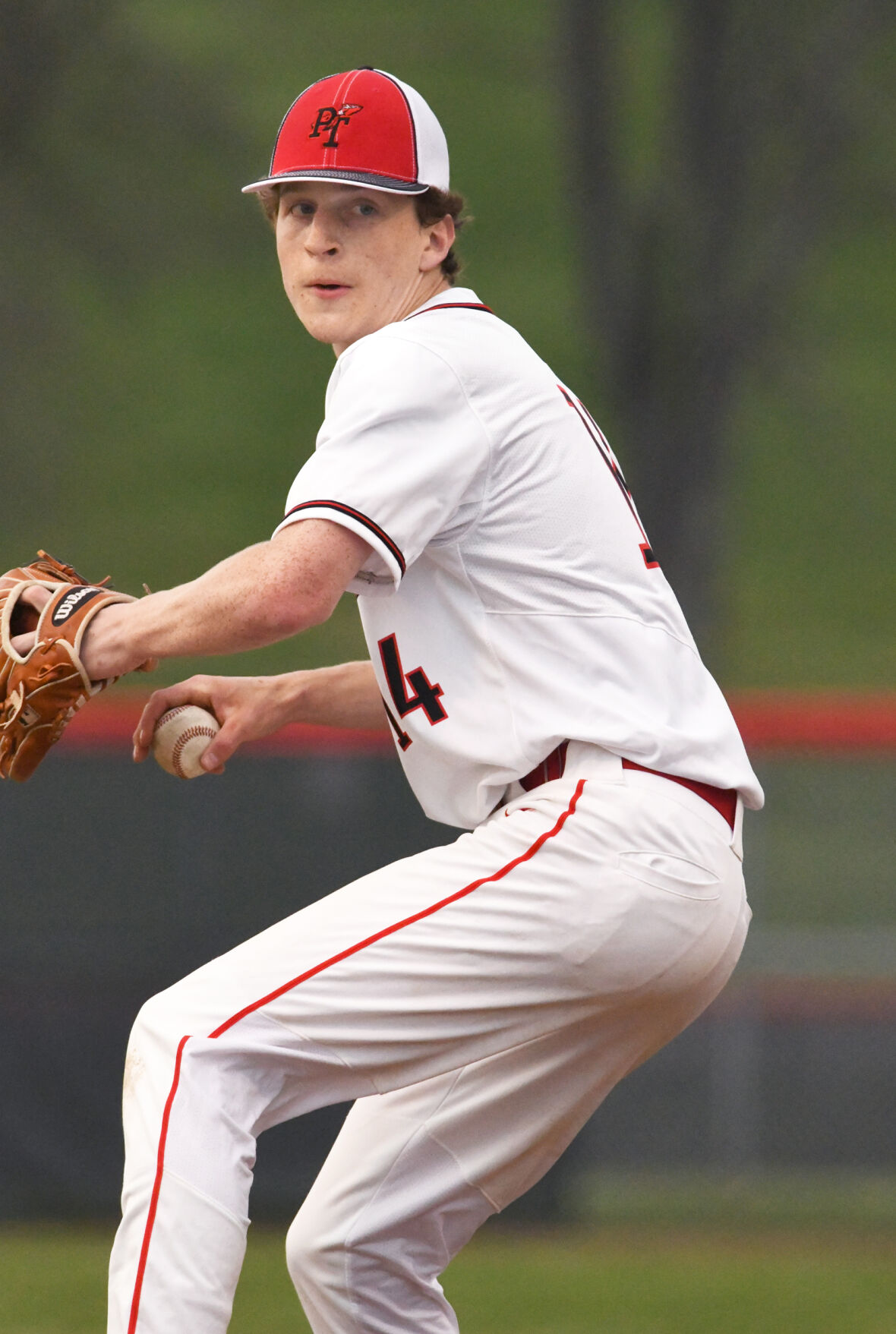 Peters Township’s Jack Natili winds up on the mound during a game against Connellsville. Natili, who also plays catcher, is a Rutgers recruit.

Peters Township’s Drew Ripepi is a multiposition player and a recruit of Pitt.

Peters Township’s Drew Ripepi will be sprinting to play for Pitt. he is one of eight Division I baseball recruits playing at local high schools this spring.

Peters Township’s Jack Natili winds up on the mound during a game against Connellsville. Natili, who also plays catcher, is a Rutgers recruit.

A decade ago, you had to turn over some rocks to find a Division I baseball player from the Washington-Greene area.

Finding someone from the area who had the skills to play at that level was as rare as chancing upon a four-leaf clover.

Fast forward to the season after the pandemic broke and you find no fewer than eight area players who have committed to NCAA Division I schools. And we’re not talking the Mid-American Conference.

Schools such as Notre Dame, West Virginia, Penn State, Rutgers and Pitt will have players on their rosters from high schools you have heard of.

What in the name of Brooks Robinson is going on here?

“I think there has been an uprising of talent in the WPIAL over the course of the last five to 10 years,” said South Fayette head coach Ken Morgan. “A rising tide raises all ships. I think it forces kids to work a little harder. It’s paid off and it shows. I think that a lot of kids are finding out their strength is in baseball. It’s a combination of all those things that makes kids want to be the next Ian Happ. I think these guys are paving the way, opening up a lot of doors.”

South Fayette fields three Division I athletes for baseball, two of whom are not committed. Chase Krewson, a sophomore outfielder, committed to Notre Dame. Tyler Pitzer, a sophomore right-handed pitcher, and Michael DiMartini, a sophomore shortstop, are uncommitted.

“(Committing early) is something that has taken place over the last five years,” said Morgan. “I think with Twitter, Instagram, recruiting services and different profiles you can create, you have more opportunity to get in front of coaches, All it takes is one great outing to get your name on a piece of paper and have coaches come out and look at you again.”

Pitzer began his high school career with a 17-strikeout performance while no-hitting North Catholic and followed that start with a 12-strikeout effort in defeating Moon 5-1.

“Everyone is starting to work harder,” said Pitzer. “All the people who are here and committed to a D-1 program are just working harder. It makes others want to work harder.”

Morgan believes many players are starting at a younger age in the sport and that has hurried their development.

“Some specialize, some make baseball their No. 1 sport while being a multisport athlete,” said Morgan. “There is an overall improvement in depth and talent in the area and an overall drive in players.”

Jimmy Sadler, a senior shortstop at Chartiers-Houston, will attend West Virginia University next fall to play baseball. He stands as the epitome of the multisport athlete. He earned a spot on the Observer-Reporter Fabulous 15 last fall, enjoying one of the best single-game efforts by an area football player: 286 yards and six touchdowns.

“I never had a game like that,” Sadler said in October. “My mentality was to make every run count because I didn’t know if this was going to be my last game or not (because of COVID-19). I played 100 percent the whole game. The line was a big thing. They just kept calling my number.”

There’s more at Peters Township. Senior third baseman Jake Dilucia will attend a Division I junior college, Sam Miller, a middle infielder and pitcher, and Jack Kail, a junior shortstop, are getting Division I looks.

“Kids have a lot of opportunities to go to showcases that gets them more exposure that probably existed 10, 12 years ago,” said Peters Township head coach Rocky Plassio. “A lot of them spend a great deal of time training in the offseason and inseason.”

Plassio said hitting, pitching and position coaches are not an unusual sight for a player.

“Our kids go all over the place,” Plassio said. “A lot of them go to C-Side (Sports Academy). These hitting coaches and pitching coaches have connections with the college coaches and they funnel them to an AAU team, and the AAU team is getting them into these showcase events. These kids go to the AAU teams and they are specializing. That’s where the conflicts can come in.”

Like Peters Township, Canon-McMillan has produced a number of Division I athletes over the years. Playing in the largest classification in most sports, the demand for success is never-ending.

“I think the talent pool in the WPIAL has gotten a lot better in the last 10 years,” said Canon-McMillan head coach Tim Bruzdewicz. “Even southern coaches are starting to look up here. I think that’s the thing.”

Bruzdewicz said the relationships with Division I college coaches has gotten stronger over the years.

“I do know a good amount of Division I coaches. My buddy I played pro ball with is the third-base coach at Baylor,” Bruzdewicz said. “I think the only player he would have been interested in (from Canon-McMillan) was Cam Weston and he went to Michigan.”

Bruzdewicz is hot and cold when it comes to outside training. He believes some AAU teams tend to overthrow pitchers. But academies such as C-Side are god-sends.

“The baseball academies are good,” Bruzdewicz said. “C-Side is where we train. We practice there when the weather is bad. We’d be hurting if we didn’t have that.”

Maybe Gardner-Webb would not have pursued and gotten commitments from Garrett Greco, a senior shortstop from Belle Vernon or Tyler Switalski, a senior left-handed pitcher from Waynesburg.