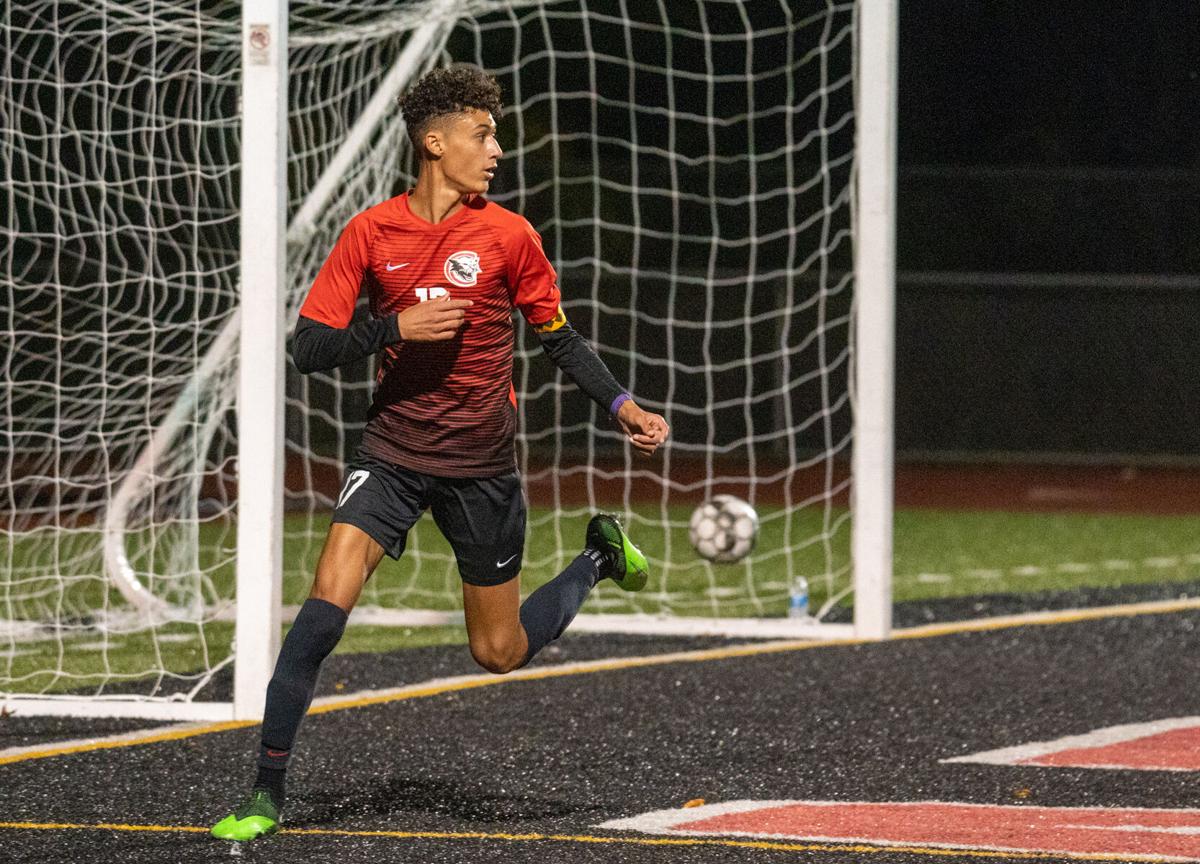 Eben McIntyre of Charleroi made many shots that resulted in goals during his career, 166 of them. He leads the WPIAL with 69 this year and has the Cougars in the postseason. 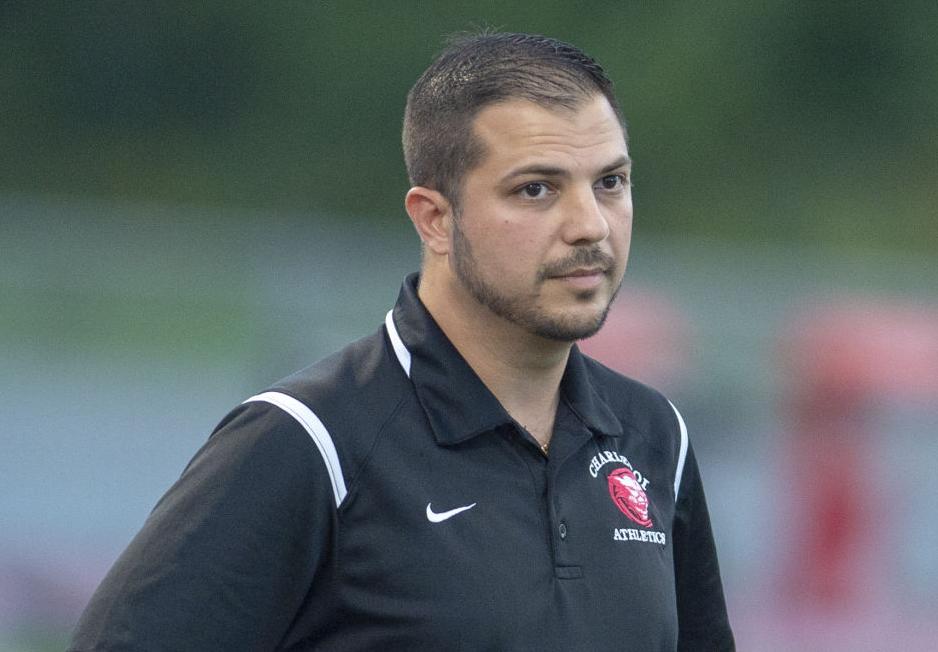 Eben McIntyre of Charleroi made many shots that resulted in goals during his career, 166 of them. He leads the WPIAL with 69 this year and has the Cougars in the postseason.

Maybe that’s fitting because his opponents on the soccer pitch might see him as their Michael Myers.

Not to say there’s anything evil about McIntyre, but he is a lethal weapon on the pitch.

The Charleroi senior has scored 166 goals in his high school career, including 69 this season, which by far leads the WPIAL.

He broke the school’s scoring record Sept. 7 against Mount Pleasant. He came into the night needing four goals to set the mark. He got four, which for him is just another day at the office.

Those who follow the Cougars have known that No. 17 will play college soccer at the highest level. This past Friday, McIntyre announced on Twitter that he’s committed to Pitt.

The Panthers have grown immensely under coach Jay Vidovich, with a national semifinal appearance last season and an 8-4 mark this year that’s featured wins over Clemson (ranked second at the time) and Duke (ranked third). The thought of contributing to Pitt’s continued growth excites McIntyre.

“The atmosphere down there is great,” McIntyre said. “It’s a good, winning environment. The coaches and the whole athletic staff just set all the players up to succeed on and off the field and in life in general. It just seemed like a place I really wanted to be.”

Before he set any records or led any categories, McIntyre was, Charleroi coach Jon Ducoli remembers, “in his shell” as a freshman.

“About halfway through the season, he started breaking through,” Ducoli said. “Right then, you saw what he was capable of.”

He finished his freshman season with 15 goals.

This season, McIntyre has launched himself into another dimension.

Even as McIntyre progressed from reserve to starter and then starter to standout, Ducoli never thought about him reaching these heights.

“As a coach, you never can really imagine that a player could get to the magnitude that Eben is playing at,” he said.

It’d be hard to blame McIntyre for getting bored. When scoring a goal is seemingly as easy as drinking water, one might think its thrill could wane. But McIntyre says this isn’t so. From goal one to 166, it hasn’t gotten old.

“It’s always been the same for me,” he said. “Even before I got to high school, I enjoyed scoring, and I always feel passionate. I always have a passion for soccer, no matter what’s happening, no matter how many times I score. It’s always exciting for me.”

For coaches, setting up a plan to stop McIntyre is only slightly more complex than teaching a cat how to speak German.

“Let’s face it, you don’t defend it,” McGuffey coach Brian Gillespie said. “You contain it.”

The first time Gillespie’s Highlanders played Charleroi this season, McIntyre scored four goals in a 7-1 romp. In the sequel, McGuffey’s scheme involved putting seven players in defense and four on McIntyre, and things went a lot better for the Highlanders. McGuffey held Charleroi, which averages nearly nine goals a game, to just two, which at the time was its lowest output of the season.

But McIntyre scored both goals, and McGuffey only scored once.

In a year where McIntyre has twice scored eight goals in a game, Gillespie sees that pair of goals as the most significant of the 69.

McIntyre could have played other sports. His athleticism, along with his 6-3 build, could have helped him in basketball – which his father, Kasey, played at Belle Vernon in the 1990s.

His experience in organized basketball, however, has been limited to a half-season way back in elementary school.

If he wanted to, McIntyre probably could have spent his falls starring for Charleroi’s football team, for whom his younger brother and teammate, Arlo, is the kicker.

But as a tyke, Eben found soccer, and aside from that youth basketball season and a year on the Charleroi track team, that’s been his only athletic focus.

Arlo McIntyre is a sophomore midfielder/forward for the Cougars. Having watched his older brother play since preschool, Arlo is still left in awe.

“Every game, I see him do something new,” Arlo McIntyre said. “Every day, he just gets better and better. There’s just so much stuff that amazes me that he does.”

Eben McIntyre meets the criteria of being a big shot. He’s 6-3, clean-cut, and the best player on his team and the leading goal scorer in the WPIAL. But he doesn’t walk around the hallways with the bravado of Muhammed Ali.

As his goal totals and grade-point average (he has a 4.0) have swelled, McIntyre has remained on an even keel. Ducoli likes it that way.

“Once their head gets too big, they start to shut off on learning more to add to their repertoire of a player,” Ducoli said. “They get set in their ways of ‘hey, this works for me, this is all I’m going to do,’ and then they become very one-dimensional. But for him to be so receptive to anything that the coaching staff wants to add to the gameplay, he just absorbs that and then is able to use that on top of everything instead of being close-minded. It’s truly remarkable.”

Eben McIntyre is a record-setter, a straight-A student, a friend and a perfectionist. What he isn’t yet is a WPIAL or a state champion.

With the playoffs drawing near, Eben McIntyre wants to keep winning, not just for glory, but to keep his time as a high school soccer player going for as long as possible.

“Every day in the playoffs is a chance to extend, have another practice, have another game, have another day with my team,” he said. “I’ll be friends with these guys when the season’s over, but fall sports season and, for me, soccer in particular, is a very special time, and it’s time for making memories and having fun. I just want to do whatever it takes to extend the memories.”

Fortunately for Eben McIntyre, his soccer days won’t end after high school and might not even end after college.

“I honestly expect him to go pro,” Arlo McIntyre said. “I’ve seen what he can do in high school, and I think it’s going to translate very well into college, and maybe after that.”

Eben won’t score 69 goals in 16 games against Division I competition, but Gillespie is sure that the Charleroi Celebre will make an impact.

“You’re going to hear about this kid,” Gillespie said.