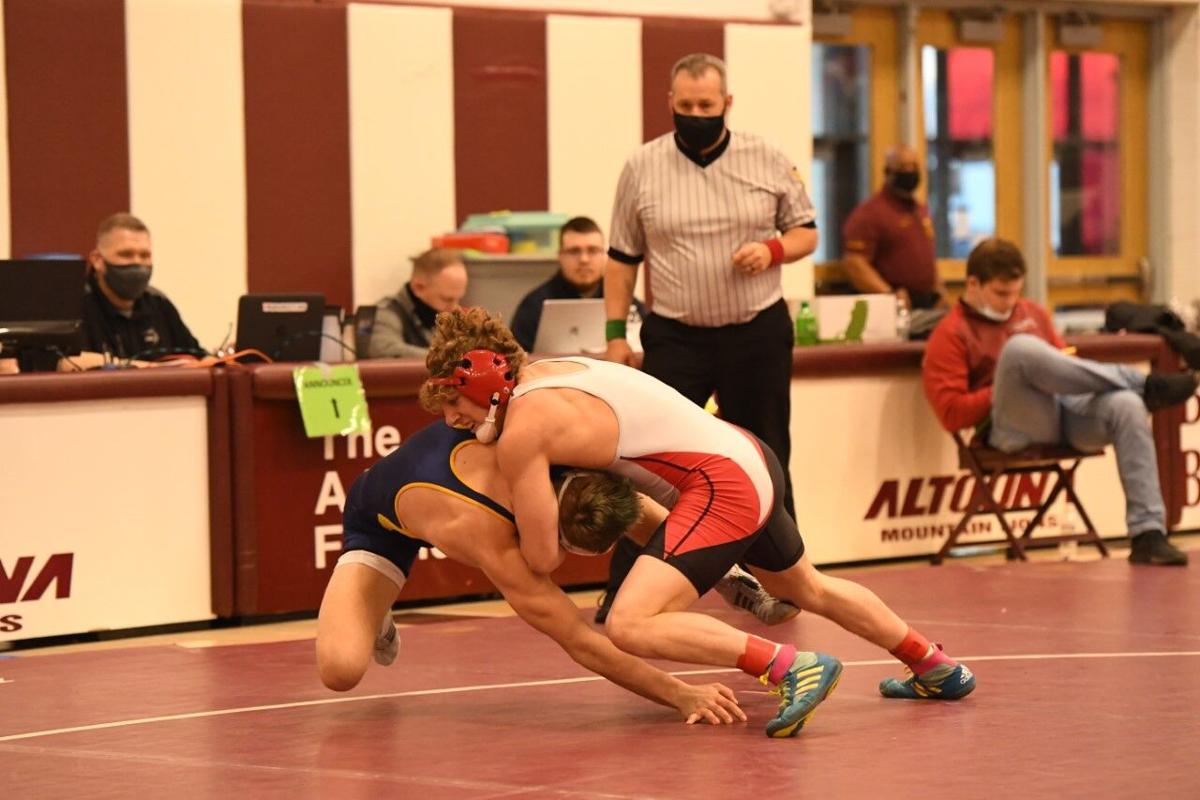 Wyatt Henson of Waynesburg (right) takes John Altieri of Norwin to the mat during the 145-pound bout in the PIAA Class AAA Super Regional Saturday at Altoona. 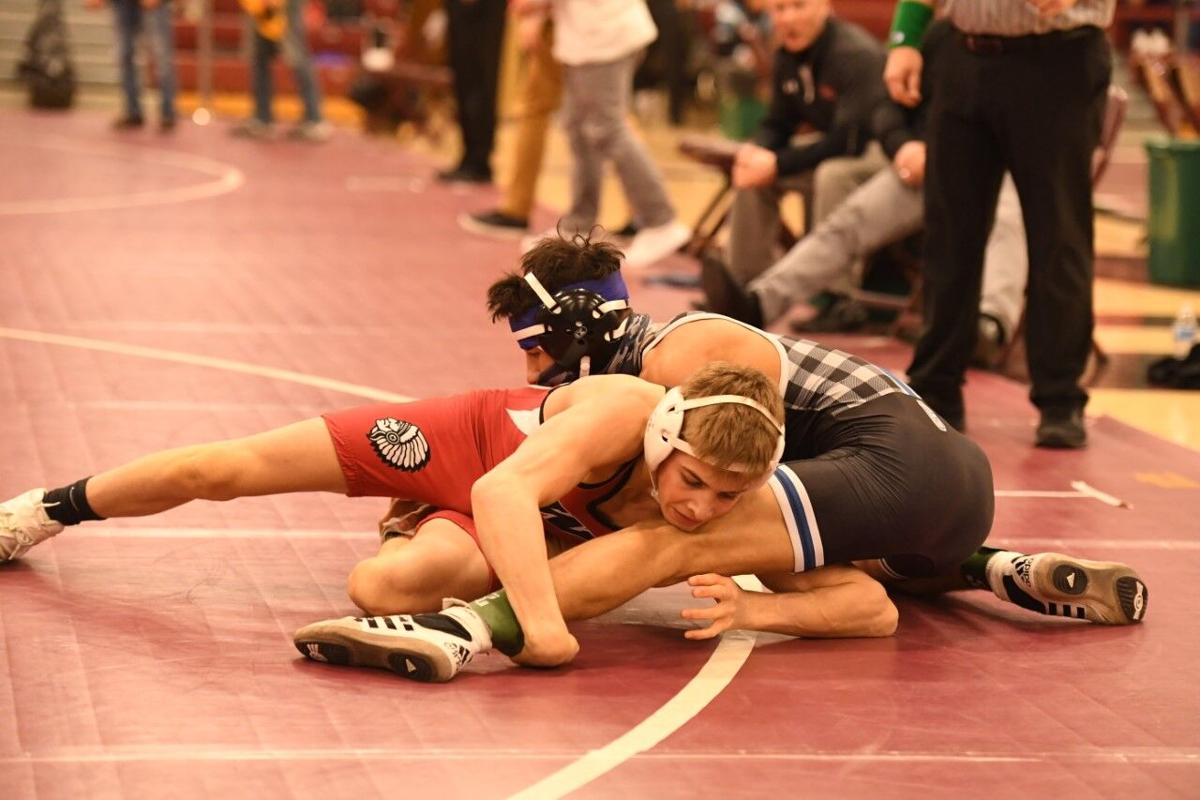 Wyatt Henson of Waynesburg (right) takes John Altieri of Norwin to the mat during the 145-pound bout in the PIAA Class AAA Super Regional Saturday at Altoona.

ALTOONA – Waynesburg High School wrestling fans were no doubt thrilled with the Raiders’ performance in the semifinals of the PIAA Class 3A Super Regional Tournament, held Saturday at Altoona High School.

The finals were not as enjoyable.

Only one of Waynesburg’s five finalists came home with a gold medal.

And of the losses, one was by disqualification, one by medical forfeit, and two were to wrestlers they beat one week earlier at the WPIAL/Southwest Region Tournament.

“The finals didn’t go as we had hoped, but we still have six kids going to Hershey,” said Waynesburg coach Joe Throckmorton, referring to the fact that six of the Raiders seven entries earned a trip to Saturday’s PIAA Tournament at Giant Center in Hershey.

Waynesburg’s only champ was sophomore Mac Church, who took the 120-pound title with a 4-3 win over Chambersburg’s Karl Shindledecker. A takedown with 3 seconds left in the second period provided the margin of victory.

“He’s a good scrambler and has long legs,” said Church of the takedown. “I finally got in on that shot and was able to pull him in and finish the takedown.”

Trailing by one point going into the final period, Shindledecker chose the neutral position.

“I was surprised,” Church said. “I didn’t know what he was trying to do there. He took me down in the first period. Maybe he thought he could take me down again. I defended against his shots pretty well.”

Raiders senior Wyatt Henson had a rematch with Norwin’s John Altieri in the 145-pound final, but the match ended in 43 seconds when Henson was disqualified for a slam. Altieri was believed to have suffered a neck injury and was taken to a local hospital for observation.

“I always hit my double like that. I may have been a little too aggressive this time,” Henson said. “I hope he is okay and can wrestle next week.”

Throckmorton was disappointed by the call, but didn’t protest.

“It’s always questionable. It’s up to the referees and they have a tough job,” Throckmorton said. “Wyatt obviously didn’t do it on purpose. It was the double that he always uses. We have a picture of his shoulder hitting first, but that’s not an easy call to make. It’s an unfortunate situation. We hope that (Altieri) will be able to wrestle next week at Hershey.”

Sophomore Rocco Welsh advanced to the 152-pound final, where he was to have a rematch with Seneca Valley’s Alejandro Herrera-Rondon, but Welsh defaulted after sustaining an injury in the semifinals.

Herrera-Rondon had defeated Welsh in three previous matches during the season.

“I just hope he is all right,” Herrera-Rondon said. “He was injured and I completely understand that. I was actually relieved. We’ve wrestled so many times already. This week didn’t really matter. What matters is next week. I hope he comes back healthy.”

“I thought I wrestled a good match, but he has good defense,” Augustine said. “I hope I get another chance to wrestle him at Hershey.”

Cole Homet’s rematch with Franklin Regional’s Finn Solomon at 138 pounds was the most surprising title match. After posting a 4-2 win over Solomon in the WPIAL finals, Homet was dominated by Solomon 12-1.

“I approached this tournament much different than last week,” Solomon said. “Last week, I went in nervous, just wanting to win. This week I went in with the goal of scoring as many points as I could. I wasn’t worried as much about the outcome. It was a much different mental approach.”

Waynesburg’s sixth PIAA qualifier was Colton Stoneking, who placed fourth at 132 pounds. The only Raiders entry who failed to qualify was Joseph Simon, who lost twice at 113 pounds.

The only other area entries were Canon-McMillan’s Andrew Binni and Trinity’s Ty Banco. Binni fell one win short of placing after a 2-1 loss to Manheim Township’s Kaedyn Williams in the consolation semifinals at 106 pounds. Banco suffered a similar fate when he was pinned by Belle Vernon’s Cole Weightman in the consolation semifinals at 215 pounds.

The PIAA Class 3A Tournament will be held Saturday. The WPIAL will be well represented with a total of 29 entries, including five who have won a previous state title: Henson, Herrera-Rondon, Latrobe’s Vincent Kilkeary, Franklin Regional’s Carter Dibert, and Hempfield’s Ethan Berginc.