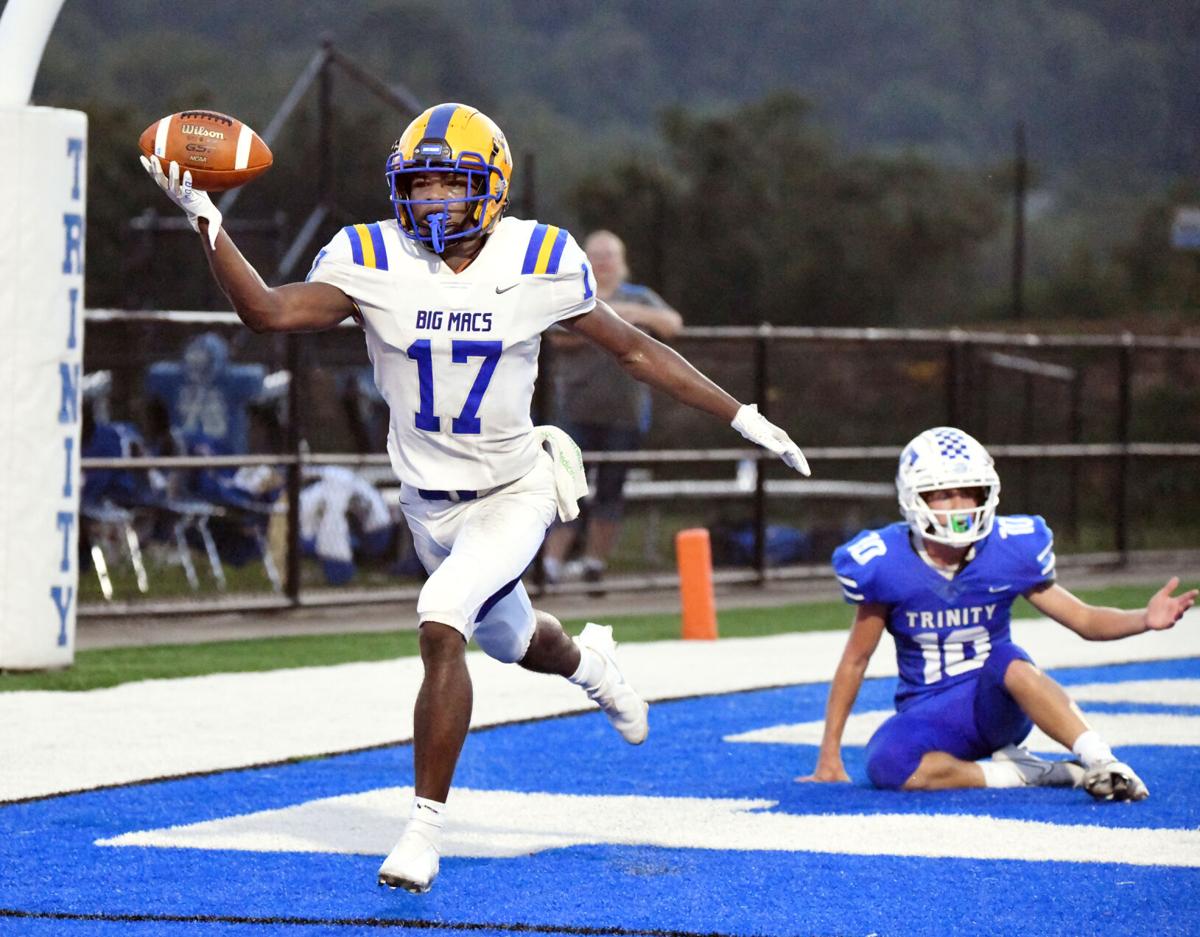 Canon-McMillan wide receiver Chris Davis, Jr. sprints across the end zone after catching a touchdown pass from quarterback Mike Evans, putting the Big Macs up 27-0 over Trinity in the second quarter Friday night at Hiller Field. 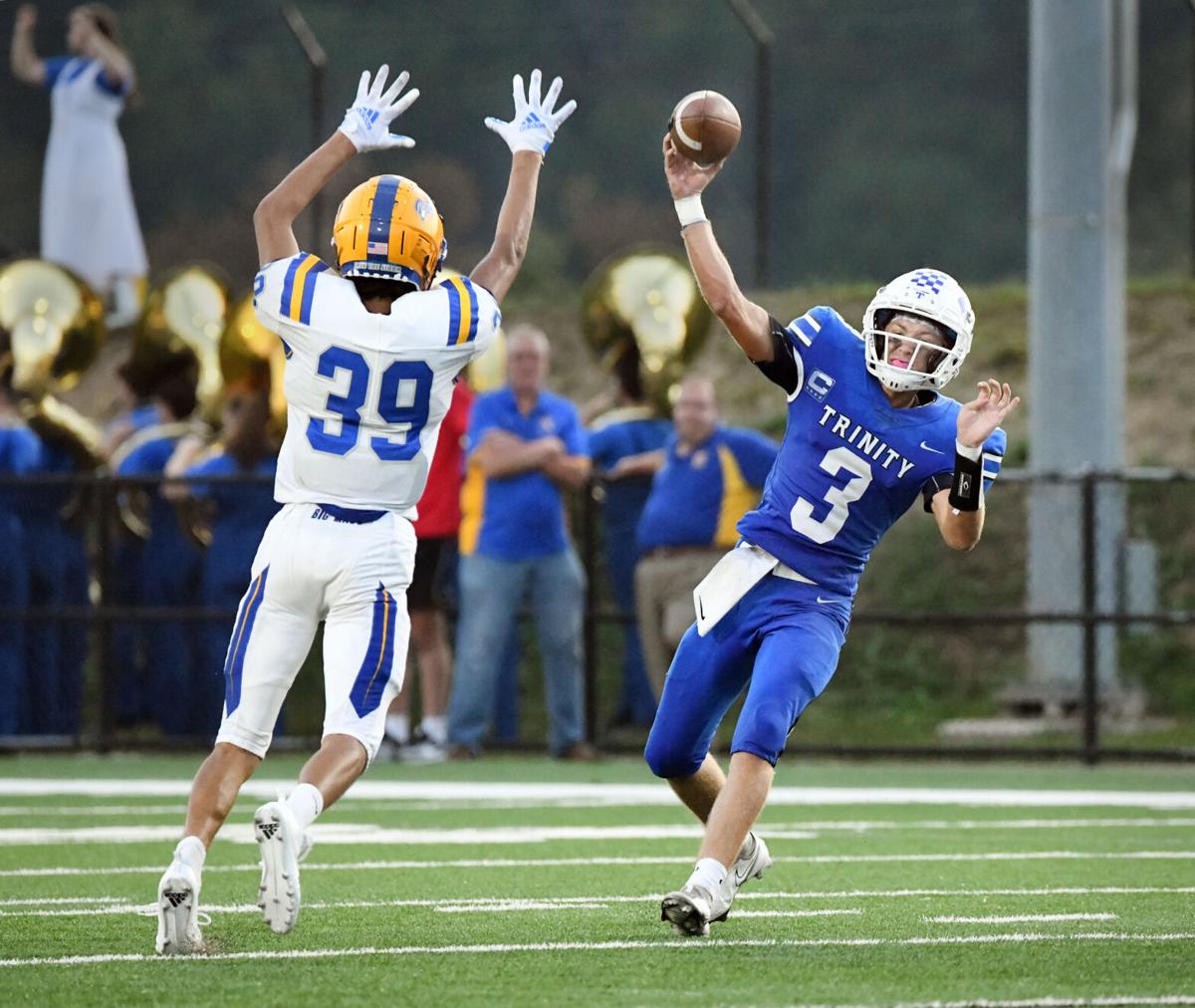 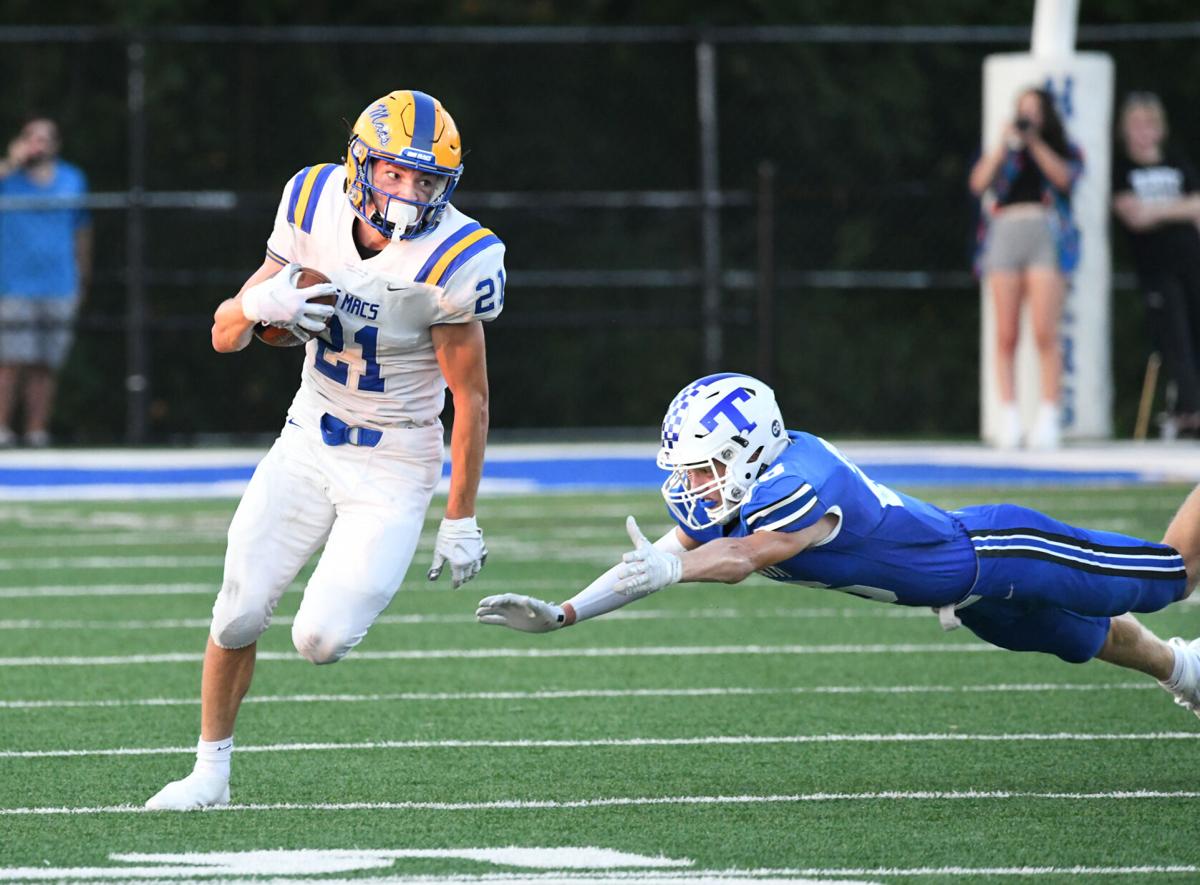 Canon-McMillan wide receiver Chris Davis, Jr. sprints across the end zone after catching a touchdown pass from quarterback Mike Evans, putting the Big Macs up 27-0 over Trinity in the second quarter Friday night at Hiller Field.

It’s been often said that games are won and lost along the line of scrimmage.

Friday night was a perfect example of that football philosophy as the Canon-McMillan Big Macs used their superiority in the trenches to beat Trinity 48-0 at Hiller Field.

Running back Ryan Angott finished with 16 carries for 159 yards, most of which came over the right side of the line. Quarterback Mike Evans finished with nine completions in 12 attempts for 168 yards.

The Big Macs gained 419 yards of total offense while holding the Hillers to 95.

The Big Macs got their season started with a six-play, 77-yard march. Sixty-nine of the yards were punishing Angott runs through the right side of the line, which sealed off the running lanes as wide as Interstate 79. Angott culminated the drive with an 11-yard run. Anthony Finney’s kick was good and the Big Macs were off and running with a 7-0 lead early in the first quarter.

“First possession was pretty clean,” Big Macs coach Mike Evans said. “After that it wasn’t so clean. Everything kind of went our way. They are really well-coached on the other side.”

Pruss intercepted Connor Roberts on the Hillers’ ensuing possession off a deflection and returned it to the Trinity 5-yard line. But the Big Macs were turned back by a game Hillers defense, along with a personal foul penalty. Finney’s 26-yard field goal was no good, leaving the Hillers’ deficit at 7-0.

Trinity appeared to have some life when it moved from its own 20 to the Big Macs’ 28. A 29-yard halfback option pass from Andrew Durig to Jeremy Durig was the big play in the drive. But the Hillers were turned back when a Roberts pass to Durig on fourth-and-5 fell incomplete because of solid defense by Finney and Brandon Underwood.

After the stop, the Big Macs moved 72 yards to their second score, an Evans one-yard sneak, pushing the Canon-McMillan edge to 14-0 late in the first quarter.

Canon-McMillan struck again after an exchange of punts in the second quarter. Angott capped the short 21-yard drive when he dragged three Hillers defenders three yards into the end zone. The Hillers blocked the extra point, leaving the score 20-0 in favor of the Big Macs late in the half.

Evans showed off his arm with less than a minute remaining in the half when he found Chris Davis for a 31-yard scoring strike and a 27-0 halftime advantage.

The onslaught continued in the third quarter as the Big Macs scored on an Evans 31-yard touchdown pass to Finney, a recovery of a blocked punt by Connor Steele in the end zone and a Ben Urso 13-yard scoring strike to Steele for a 48-0 bulge late in the third quarter.

Canon McMillan’s defense also recovered two fumbles in the third and limited the Hillers to minus-2 yards on offense.

Treyvon Mullen put the exclamation point on the win when he intercepted a Luke Lacock pass in the waning moments of the fourth quarter.

Canon McMillan’s defense permitted the Hiller to cross midfield only once in the ballgame.

After the game, the Big Macs’ coaches put the players throught their paces with extra calisthenics, up-downs and sprints. Some of which would seem odd for a team that won its opener by 48 points.