We're temporarily changing our customer service hours. We will be available to take calls weekdays from 7 a.m. to 2 p.m. at 724-222-2201. The business office remains closed to the public.
1 of 6 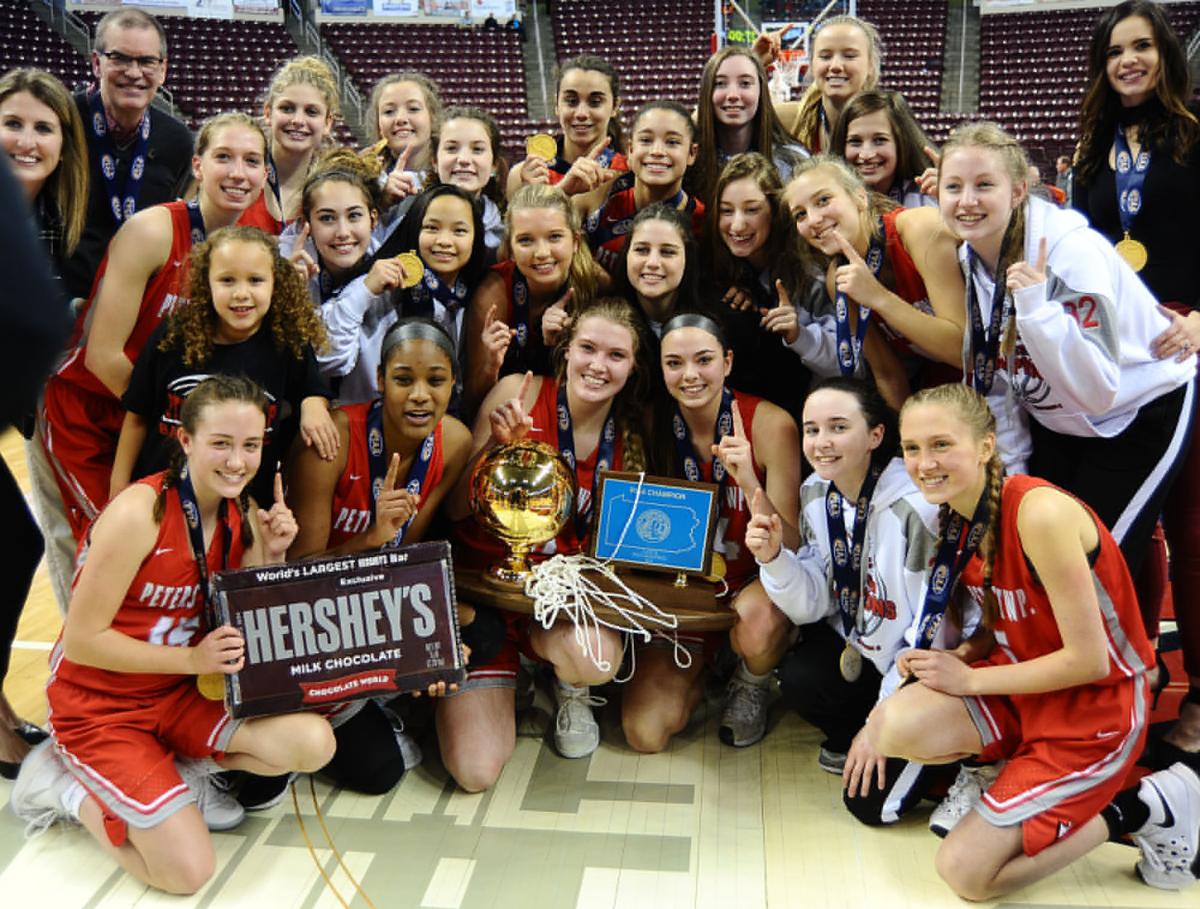 The Peters Township High School girls basketball team gathers on the court Friday at the Giant Center in Hershey after defeating Garnet Valley 62-49 in the PIAA Class 6A championship game. The Indians completed an undefeated (30-0) season and became the first team from Washington County to win a girls basketball state championship. 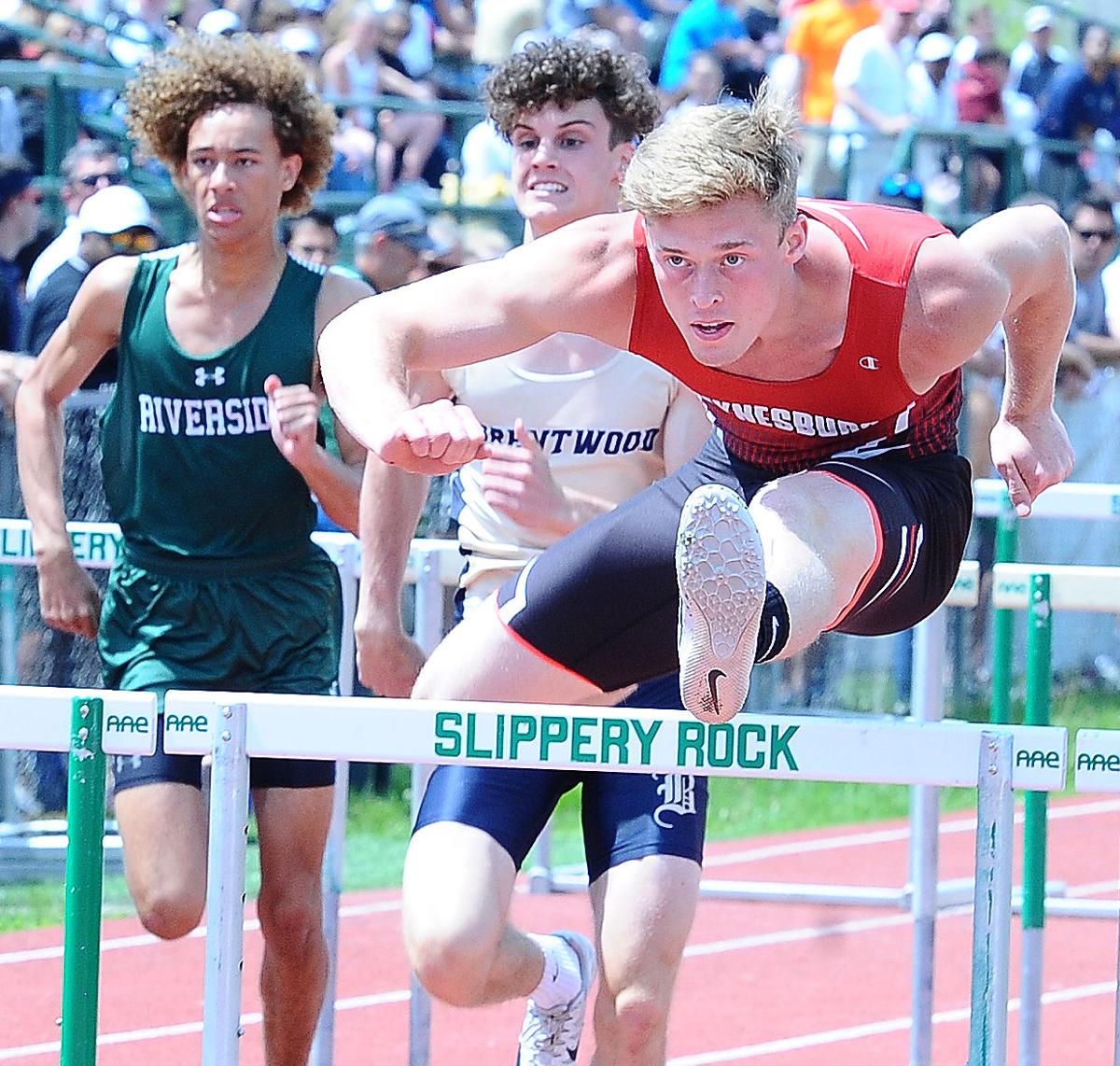 Daniel Layton clears the final obstacle on the way to defending his WPIAL Class AA championship in the 110-meter high hurdles. 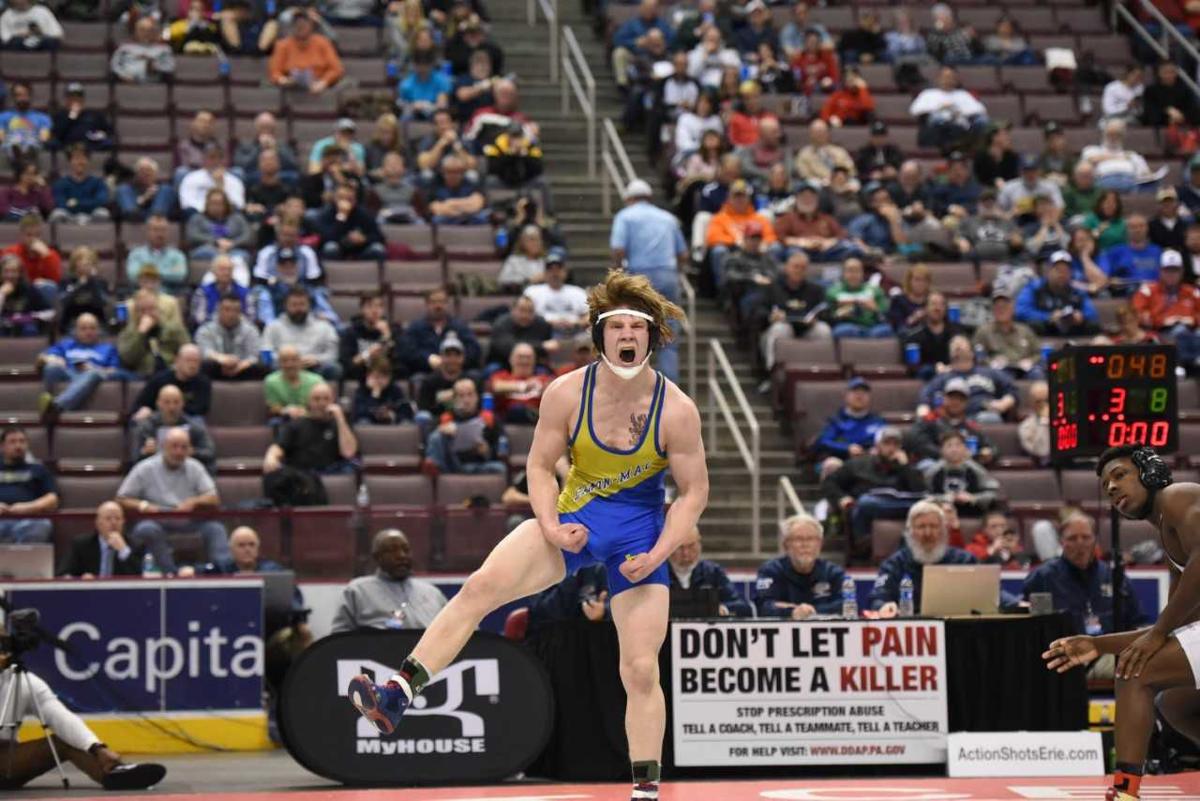 Gerrit Nijenhuis of Canon-McMillan strikes a pose in March after becoming the 170-pound state champion in the PIAA Class AAA Wrestling Championships in Hershey. 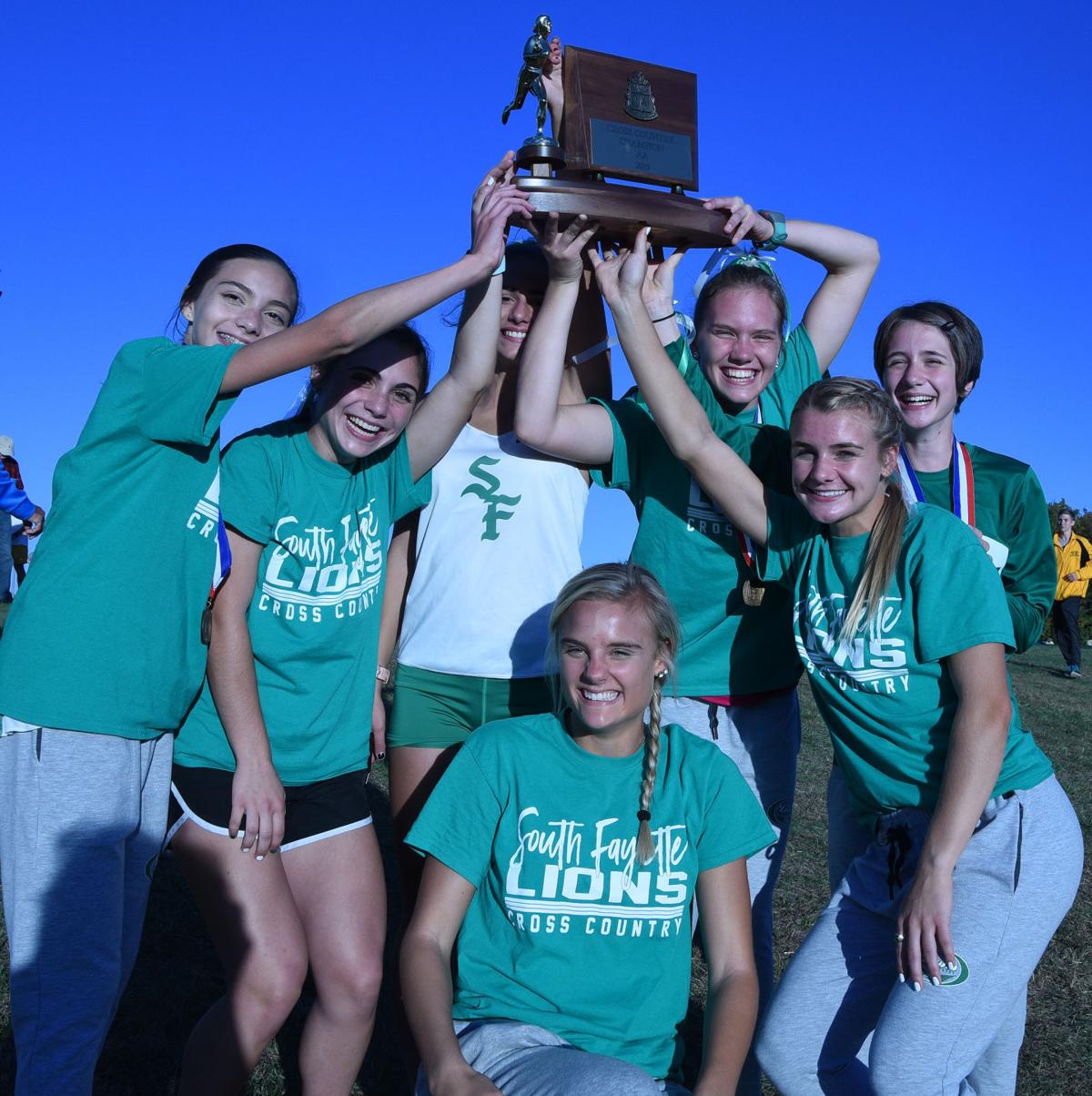 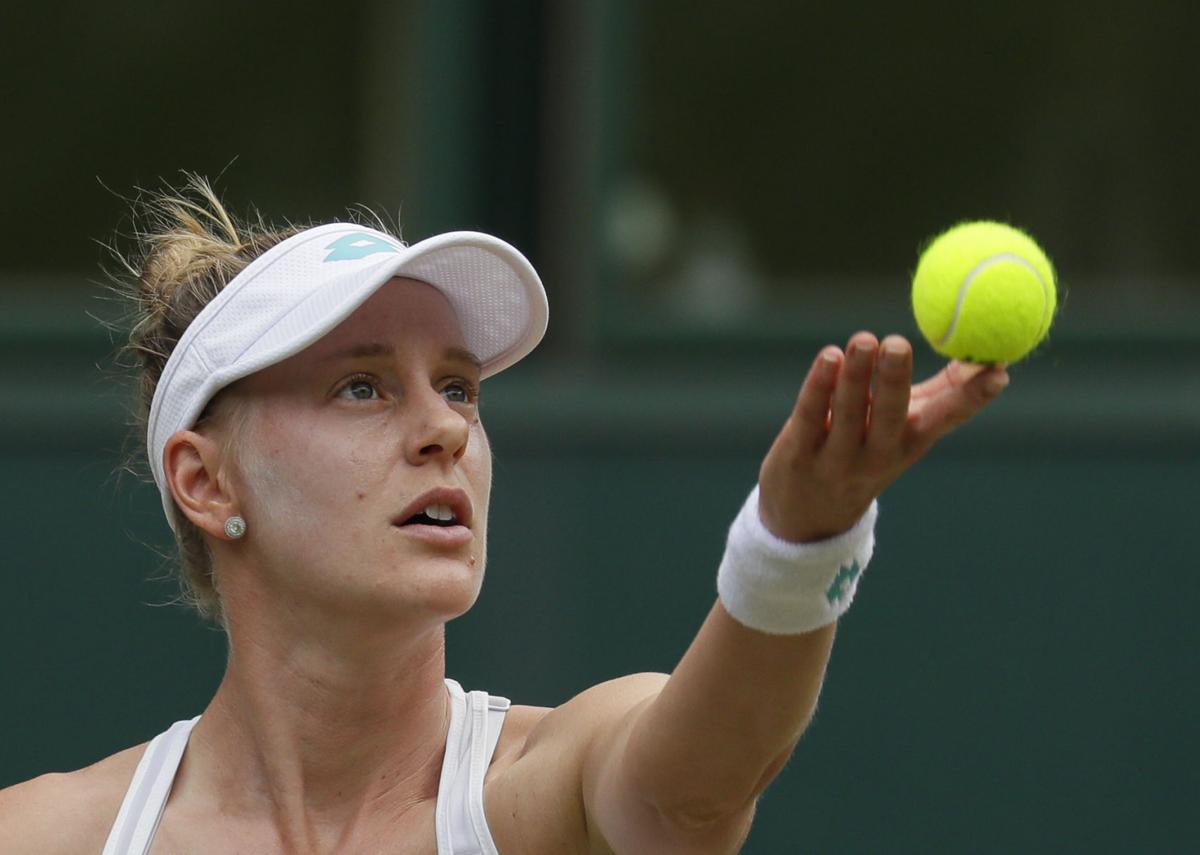 Alison Riske of McMurray made the quarterfinals at Wimbledon, upsetting the world’s No. 1-ranked player in the process. (AP Photo/Kirsty Wigglesworth) 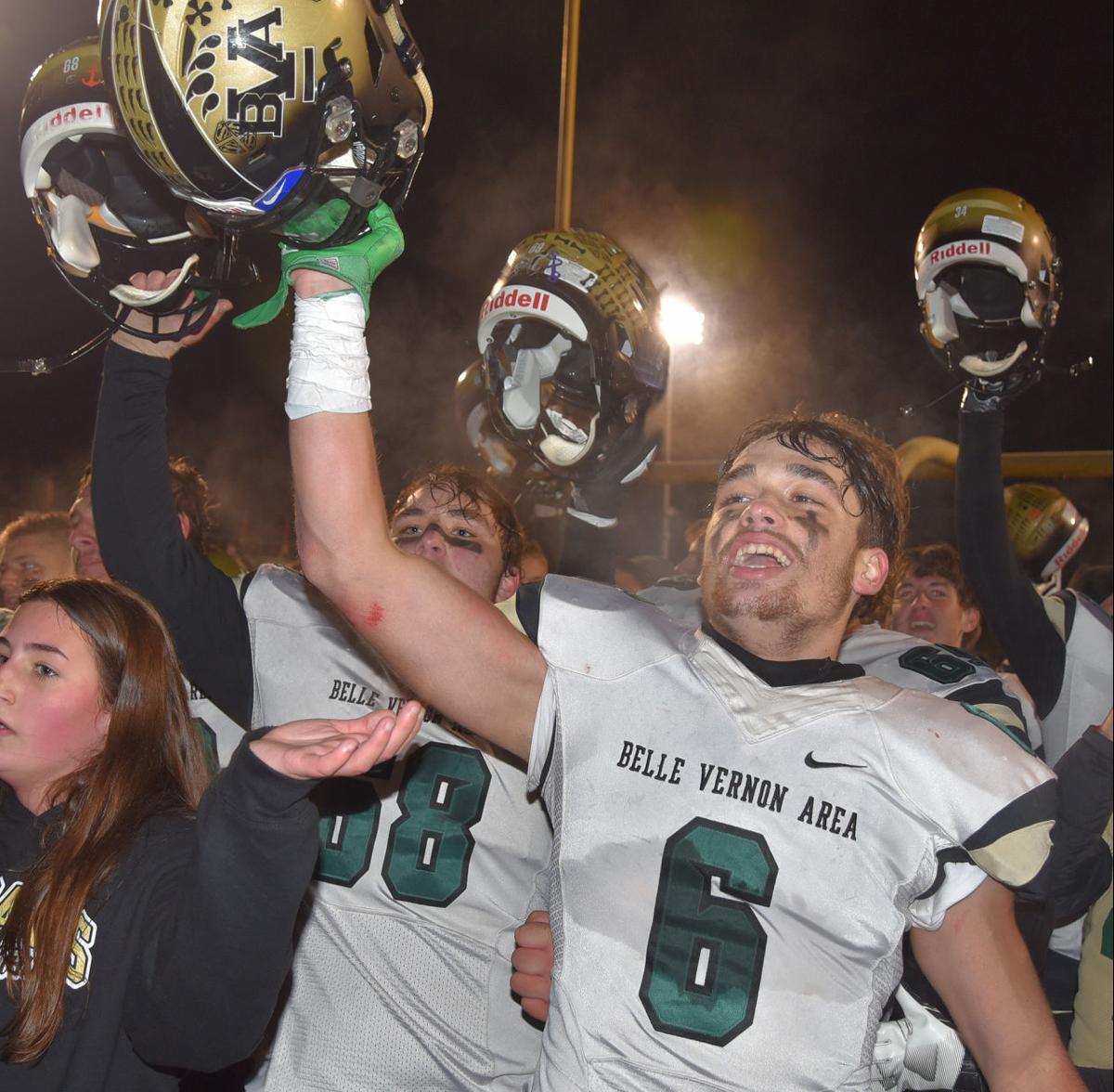 The Peters Township High School girls basketball team gathers on the court Friday at the Giant Center in Hershey after defeating Garnet Valley 62-49 in the PIAA Class 6A championship game. The Indians completed an undefeated (30-0) season and became the first team from Washington County to win a girls basketball state championship.

Daniel Layton clears the final obstacle on the way to defending his WPIAL Class AA championship in the 110-meter high hurdles.

Gerrit Nijenhuis of Canon-McMillan strikes a pose in March after becoming the 170-pound state champion in the PIAA Class AAA Wrestling Championships in Hershey.

Alison Riske of McMurray made the quarterfinals at Wimbledon, upsetting the world’s No. 1-ranked player in the process. (AP Photo/Kirsty Wigglesworth)

Entering the PIAA Class 6A championship with a perfect 29-0 record, the Indians became only the fourth girls basketball team in Pennsylvania history win a state title by going undefeated, routing Garnet Valley, 62-49, at the Giant Center.

The Indians did so in dominating fashion, winning 26 of their 30 games by double digits.

Prior to its run at a state title, Peters Township became only the fourth school in county history to win a WPIAL girls basketball championship. In a thrilling 43-40 overtime victory over North Allegheny, the Indians joined Immaculate Conception (1986), Washington (1992) and Chartiers-Houston (2017) as district champions.

Layton’s redemption – he fell and finished last in the finals of the 110-meter high hurdles in the 2018 PIAA Track & Field Championships – wasn’t at all how he envisioned.

While finalizing the entry list for the WPIAL Championships, Layton’s coach and father, Rick Layton, accidentally made a clerical error by removing his son out of the 110 hurdles and taking away a chance to defend the district’s gold medal.

After the mistake was recognized, the WPIAL voted 12-3 to deny Waynesburg’s appeal to make Layton eligible in the event. Waynesburg then took the process to the PIAA, which overturned the district’s ruling with a unanimous vote only one day prior to the WPIAL Championships.

Layton defended his WPIAL title in the 110 hurdles with a convincing time of 14.58 seconds, more than a half-second faster than the rest of the field. He also won the WPIAL pole vault title.

At the PIAA Championships, Layton got his redemption by placing first in 14.53 to win a state title.

The 6-1, 215-pound senior tailback from West Greene High School became the first player in WPIAL history to rush for at least 3,000 yards in a season. That performance helped him become the all-time rushing leader in Greene County history. His 7,102 career yards broke the mark of 6,304, held by another West Greene running back, Rodney Wilson.

Jackson set the WPIAL’s touchdown record for the regular season, finishing with 47. The previous record of 42 was held by Armstrong’s Zane Dudek.

His 50 touchdowns came within two of breaking the single-season record of 51, set by Clairton’s Tyler Boyd in 2012.

Jackson led the Pioneers to three WPIAL playoff appearances since his sophomore season. West Greene went 10-2 and made it to the semifinals in Class A this season.

Jackson will attend West Point and play football for Army.

At times, the wrestling season was a dark place for Gerrit Nijenhuis, complete with an altercation at the Powerade Tournament, a knee injury and a two-time state champion in Edmund Ruth of Susquehanna Township blocking his path to a PIAA title.

Nijenhuis, the 170-pounder from Canon-McMillan High School, put on a dazzling display at the PIAA Class AAA Championships inside the Giant Center in Hershey. He totally dominated Ruth, 8-3, in a finals performance that was so impressive that Nijenhuis was named Outstanding Wrestler for Class AAA.

When the final buzzer sounded, Nijenhuis turned to the Big Macs’ section of fans and struck a pose. After getting his hand raised, Nijenhuis did a running leap into the arms of head coach Jeff Havelka.

Nijenhuis became the 45th state champion from either Canonsburg or Canon-McMillan.

5. ‘The Voice’ signs offFor 44 years, Roger Huston was the soundtrack of The Meadows harness racing track.

The venerable Huston, known simply as “The Voice,” was the track announcer and called all the big races at The Meadows, from The Adios to the Messenger Stakes to record-setting victories by driver Dave Palone. When somebody mentions The Meadows, it’s likely the first thing that comes to mind is Huston’s excitable and distinctive voice.

Huston has called more than 188,000 races in his career, the vast majority at The Meadows. He announced this year that he is cutting back on his announcing duties, though he will continue to call the Little Brown Jug, which he’s done since 1968, and he’ll announce at a number of county fairs. Huston started working at The Meadows in 1976 and called his final races there this year on Nov. 2.

“It won’t be the same here without him,” Palone said. “He’s going to be missed, not just announcing but in the backstretch community here at The Meadows. He’s like a member of everyone’s family.

“And Roger may be the most passionate person ever about harness racing. He still counts every statistic and lives and breathes harness racing. We’ve been fortunate that he’s been in the sport.”

The end came quickly and sent shock waves throughout the PIAA softball world.

West Greene failed to come up with the clutch hits it needed, stranded 12 runners on base and fell to DuBois Central Catholic, 3-2, in a PIAA Class A semifinal game at Slippery Rock University.

There would be no fourth consecutive trip to the state finals for the Pioneers. There would be no third PIAA championship. There would be only heartache and tears. Arguably, the two best players in the program’s history – twin sisters McKenna and Madison Lampe – had played their last varsity game.

The Pioneers finished the season with a 21-5 record and routed Union 11-0 for their fourth consecutive WPIAL championship.

When the Frontier League’s playoffs ended in September, the independent baseball league was in an odd situation. River City had just won the league championship, but the Rascals had announced in August that they were ceasing operations at season’s end. They became the third franchise to leave the league in two years.

That left the Frontier League at nine teams and in need of one more to have a preferred even amount of clubs. What the league ended up getting was not one, but five more franchises.

On Oct. 16, it was announced that the Frontier League was merging with five members of the Can-Am League, creating a 14-team independent league ranging from Canada to St. Louis. The merger should not have come as a surprise because the two leagues held a joint all-star game in July, which the Frontier League won 7-0.

Next summer, fans of the Wild Things will be able to see plenty of the Frontier League’s newest team because Washington has been placed in a seven-team division that also includes the five former Can-Am franchises, the New Jersey Jackals, Sussex County Miners, New York Boulders, Quebec Capitales and the Trois-Rivieres Aigles.

History was made, streaks were snapped and teams were forced to settle for second place.

The high school football playoffs had a little bit of everything, especially for local teams.

Three teams – Washington, Peters Township and Belle Vernon – advanced to the WPIAL championships in their respective classifications. It was the second time in three years the Prexies made the championship game, however, they ran into Jax Miller and Avonworth. Miller ran for an incredible 291 yards and four touchdowns on 43 carries to lead the second-seeded Antelopes over Washington, 28-6. Peters Township advanced to the district title game for the first time in program history. A back and forth WPIAL Class 5A championship eventually went in favor of Gateway, 21-20. The first trip back to a championship game since 1999 didn’t go how Belle Vernon envisioned. The Leopards ran into powerhouse Thomas Jefferson in the Class 4A title game, losing to the eventual state champion, 41-7.

There were two local teams that ended long playoff winless droughts, which made their seasons successful. McGuffey won its first playoff game since 1994, defeating South Side Beaver 54-23 in the first round of the Class 2A playoffs. It was the first postseason victory for the Highlanders since winning the program’s only WPIAL championship, over Blackhawk at Three Rivers Stadium 25 years ago. The streak without a playoff win for West Greene was one year longer than that of McGuffey. That also was snapped as the Pioneers used their home-field advantage to streamroll Greensburg Central Catholic, 36-0, in the opening round in Class A. That’s where both short-lived playoff runs ended as the Highlanders and Pioneers each lost in the ensuing round.

Maybe the biggest shocker throughout the entire WPIAL was Burgettstown, which had just completed back-to-back undefeated regular season, being shocked at home in the confines of Hill Memorial Stadium. A premature ending to the Blue Devils’ season came at the hands of upset minded, 14th-seeded Riverside. With the Panthers trailing 14-0 less than six minutes into the game, they rode a strong passing game to stun third-seeded Burgettstown, 42-35, in overtime.

McMurray native Alison Riske made her deepest run in a Grand Slam tennis tournament this summer when she advanced to the quarterfinals at Wimbledon.

Riske was the Comeback Kid at Wimbledon as she knocked off the No. 22 seed, Donna Vekic of Croatia, in a three-set first-round match, and followed that with another three-set victory over Ivana Jorovic of Serbia. Riske won the third set 9-7 as the match lasted nearly three hours. In the third round, she was a 4-6, 6-4, 6-4 winner over No. 13 seed Belinda Bencic of Switzerland. That sent Riske into the fourth round against world No. 1 and reigning French Open champion Ash Barty. Riske pulled off a stunning 3-6, 6-2, 6-3 victory, ending the top seed’s winning streak at 15 matches.

In the quarterfinals, Riske’s momentum ended with a three-set loss to Serena Williams.

South Fayette had four runners finish among the top 14 in the team competition as the Lions finished with 62 points to easily outdistance runner-up Northern of District 3, which had 77 points.

Sophomore Lauren Iagnemma was the top finisher for South Fayette, crossing the line in third place among the team competitors and 13th overall in 19:22. Freshman Angelina Gabriel was ninth in the team event, finishing in 20:04, 18 seconds ahead of teammate Hailey Poe, who was 13th. Steffanie Kozak was 14th, Emma Fleck 22nd and Gabby Baiano 29th and Morgan Lukenich 42nd.

At the WPIAL meet, the Lions routed second-place Greensburg Salem, 51-111, and Iagnemma paced SF with a third-place finish with a time of 19:49 over the 3.1-mile course.