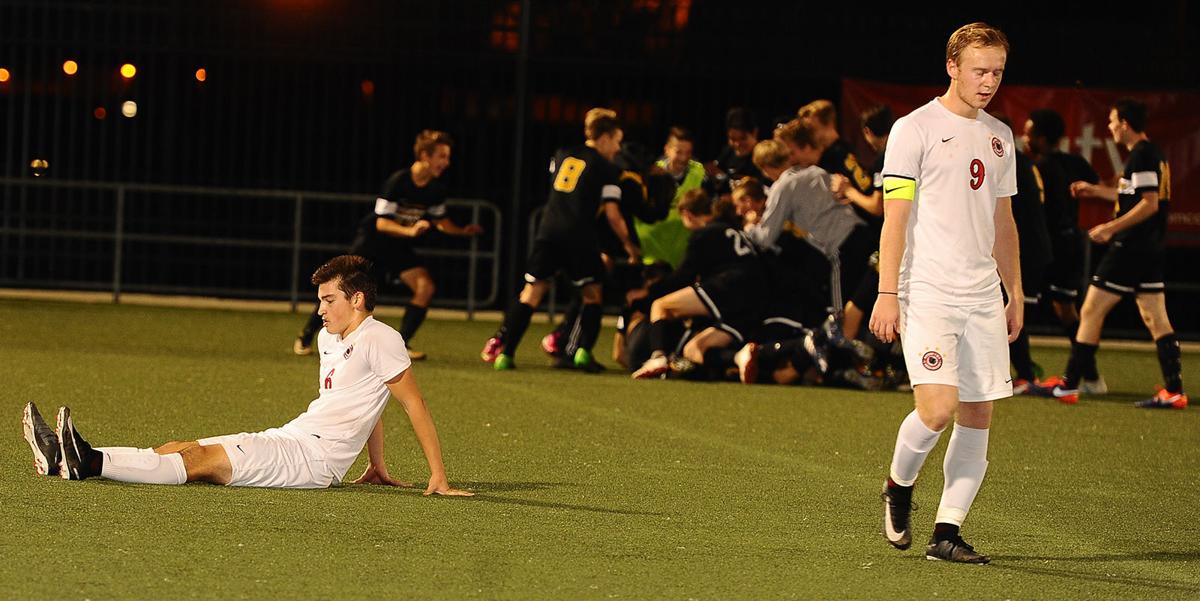 Logan Brinsky sits and Bryce Gabelhardt walks off the field while North Allegheny celebrates its 2-1 victory over Peters Township in the WPIAL Class 4A championship game Thursday night. 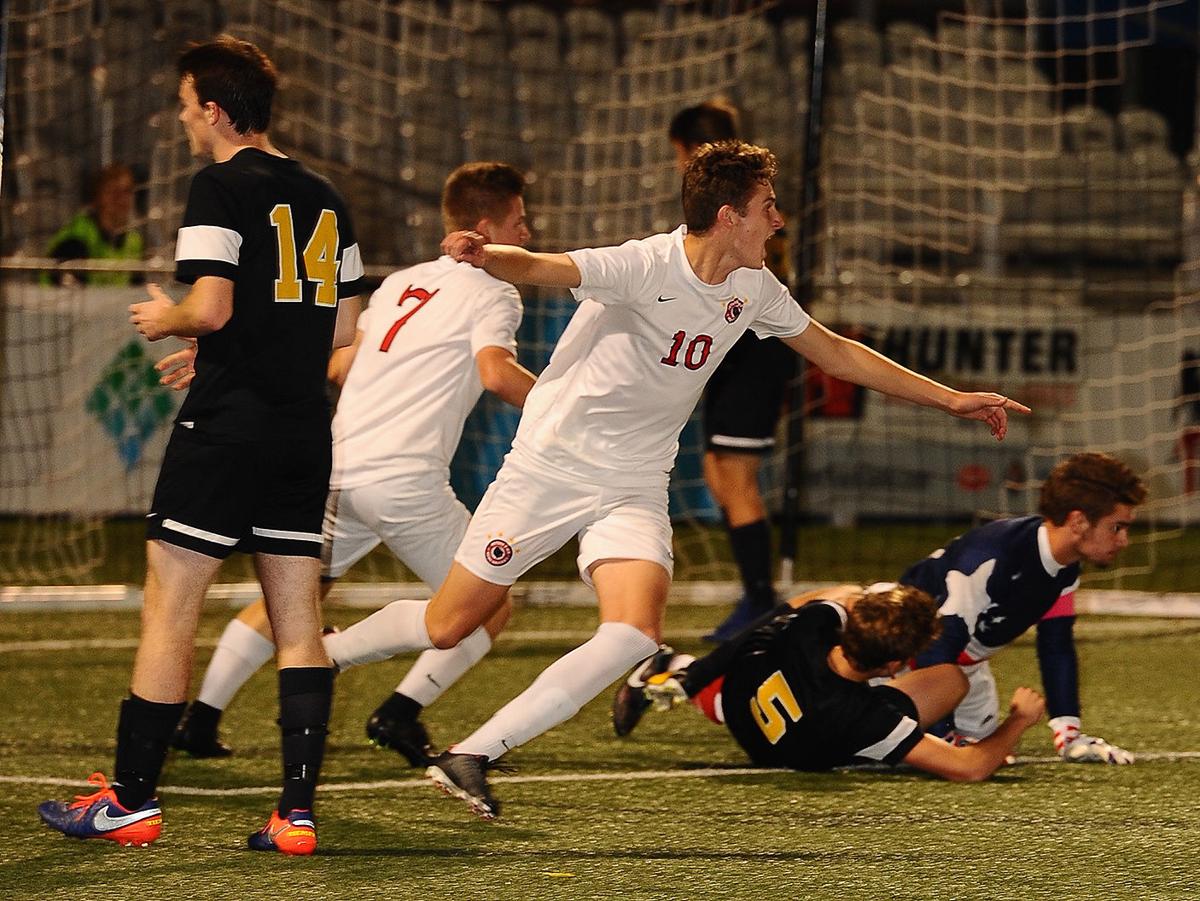 Peters Township’s Luke Kelly (10) celebrates after scoring a goal against North Allegheny’s Grant Glorioso. The first-half tally lifted the Indians to a 1-0 lead over the Tigers in the WPIAL Class 4A boys’ championship game. 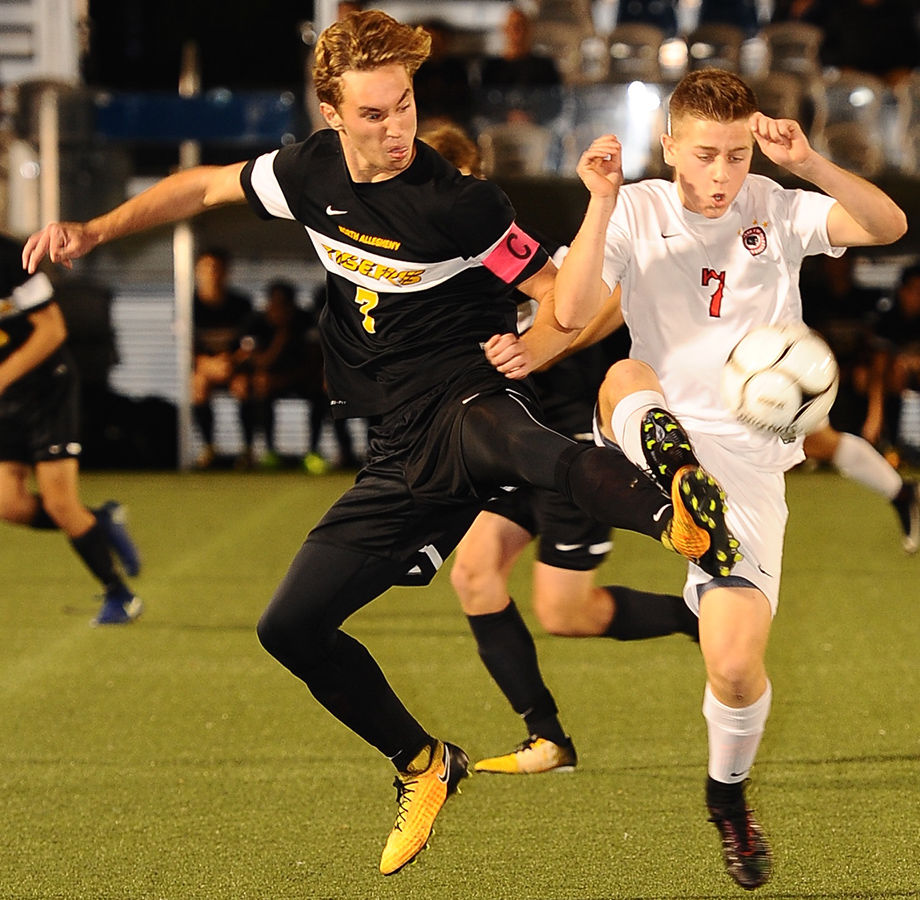 Logan Brinsky sits and Bryce Gabelhardt walks off the field while North Allegheny celebrates its 2-1 victory over Peters Township in the WPIAL Class 4A championship game Thursday night.

Peters Township’s Luke Kelly (10) celebrates after scoring a goal against North Allegheny’s Grant Glorioso. The first-half tally lifted the Indians to a 1-0 lead over the Tigers in the WPIAL Class 4A boys’ championship game.

PITTSBURGH – Chasing has been a word that the Peters Township High School boys soccer program has tried to stray away from at all costs this year.

Whether that’s chasing its 10th WPIAL championship or having to chase when failing to score first – similar to what the Indians were forced to do when North Allegheny bounced them from the playoffs last season – it’s a word Peters Township head coach Bobby Dyer has tried to avoid.

The Indians were able to avoid chasing throughout the regular season with an undefeated record. They averted having to do it in the playoffs with a game-by-game approach and not overlooking an opponent. They also were able to do it again for most of Thursday night.

That was, until the final 10 minutes when North Allegheny scored on an own goal with 7:17 remaining to tie the score and Cameron Yurick buried a shot into the wide-open net less than two minutes later to give the Tigers back-to-back titles and a 2-1 victory in the WPIAL Class 4A championship game at Highmark Stadium.

The own goal, the result of a bounding free kick between the back line of Peters Township defenders and goalkeeper Derek Deyarmin, was kicked beyond the outstretched arm of a leaping Deyarmin on a quick clear gone bad, tying the match at 1-1.

“It’s just a matter of them putting the ball in a dangerous position,” Dyer said. “We had to clear it and we made an error. That’s just the bottom line. It’s an unfortunate situation because I thought we defended pretty well.”

With Peters Township flustered, the Tigers pounced again to score the game-winning goal with 5:32 remaining as Josh Luchini found the foot of Yurick, who didn’t stare long at an empty goal before netting the clincher.

“We try to play our game,” said North Allegheny coach Bobby Vosmaer. “We panicked a little bit 10 to 15 minutes into the second half. We keep believing. I told them you cannot go on the field not believing that you can’t win the game. If there is any doubt I won’t put them in. They know that.”

Forced to face several set pieces in the first half, including some dangerous corner kicks, Peters Township countered with its first goal when Bryce Gabelhart found room in the box and passed to Luke Kelly, who beat the NA goalkeeper to give the Indians a 1-0 lead with 24:47 remaining in the half.

North Allegheny’s best chance in the opening 40 minutes came late in the half. After a loose ball bounded in the box from a corner kick, Deyarmin made a point-blank save on a Tigers attacker from 15 yards to preserve the 1-0 halftime lead.

The Tigers then came inches away from tying the score only eight minutes after halftime when Luchini put a shot on from distance that clipped the crossbar and was eventually cleared by the Indians.

“Possession is fine,” Dyer said about the North Allegheny’s onslaught after allowing the first goal. “(Their) possession up to that point hadn’t allowed a goal. Up to that point, we played the plan. We got a couple of good chances on breaks and counters. Best played plans sometimes don’t work.”

The win would have been Peters Township’s 10th WPIAL title and fourth since 2010.

“That’s a gritty and gutty performance,” Dyer said of his team. “I don’t know that (North Allegheny) is the better team.”

Peters Township will play Erie McDowell in the opening round of the PIAA tournament Tuesday at a site and time to be determined.

“If I gave you a choice of a WPIAL title or a state title, which one would you have chosen?” Dyer said. “Would you rather be a champion of 35 or a champion of the whole state? It’s still out there. That’s what we’ve got to do.”