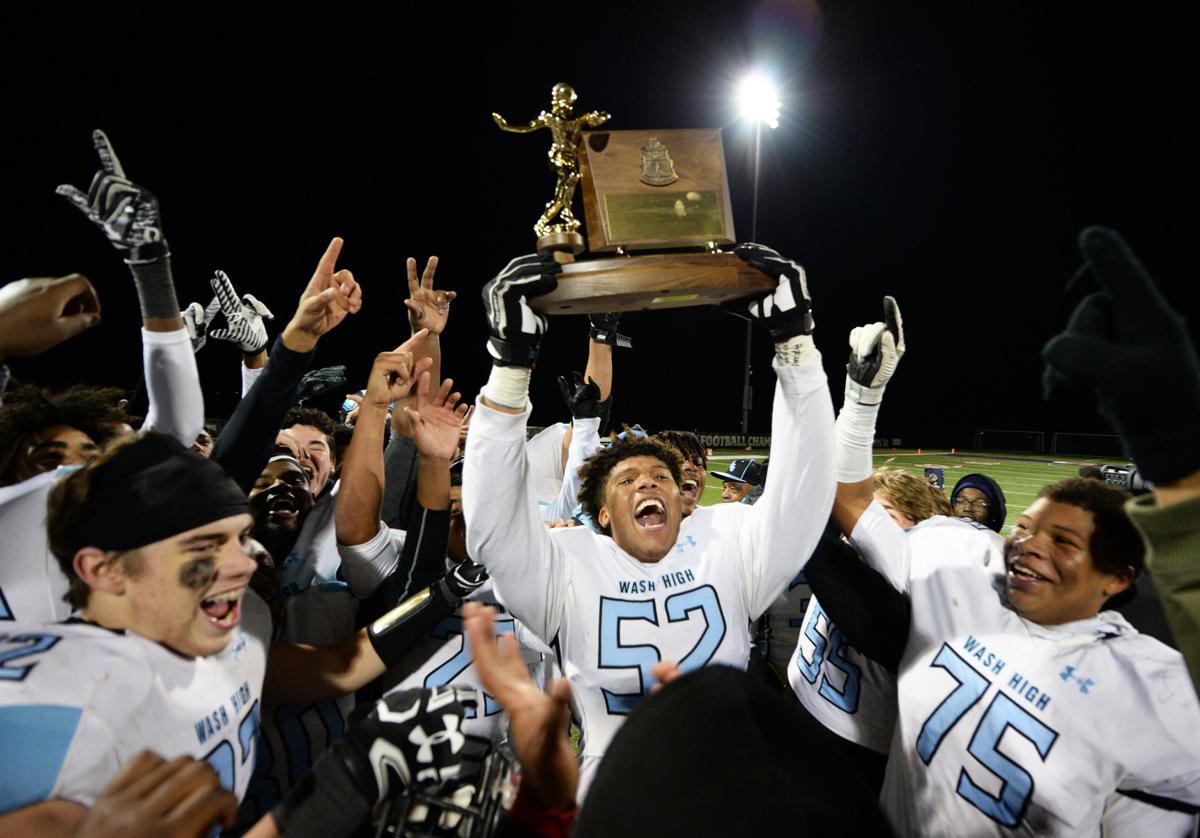 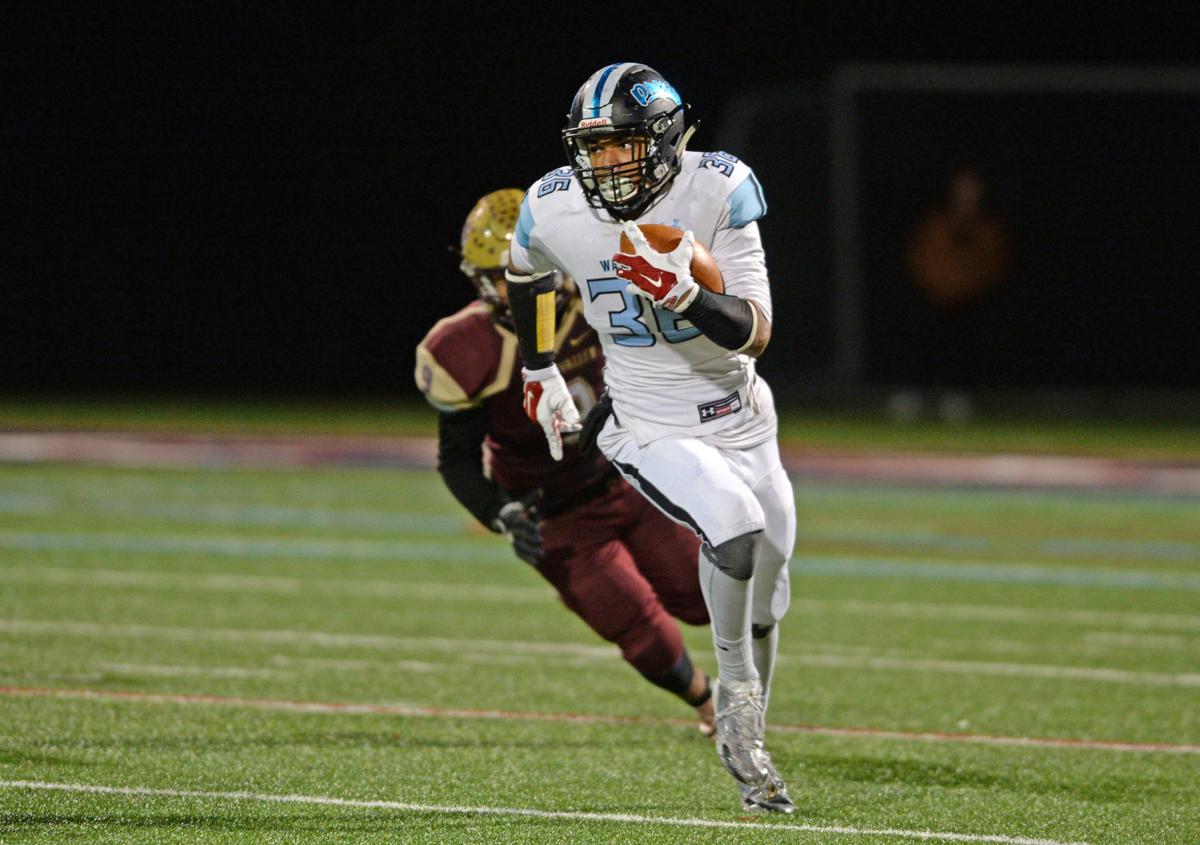 Washington’s Isaiah Schoonmaker, a Miami of Ohio recruit, was one of five local players named to the Pennsylvania Football Writers All-State Team. 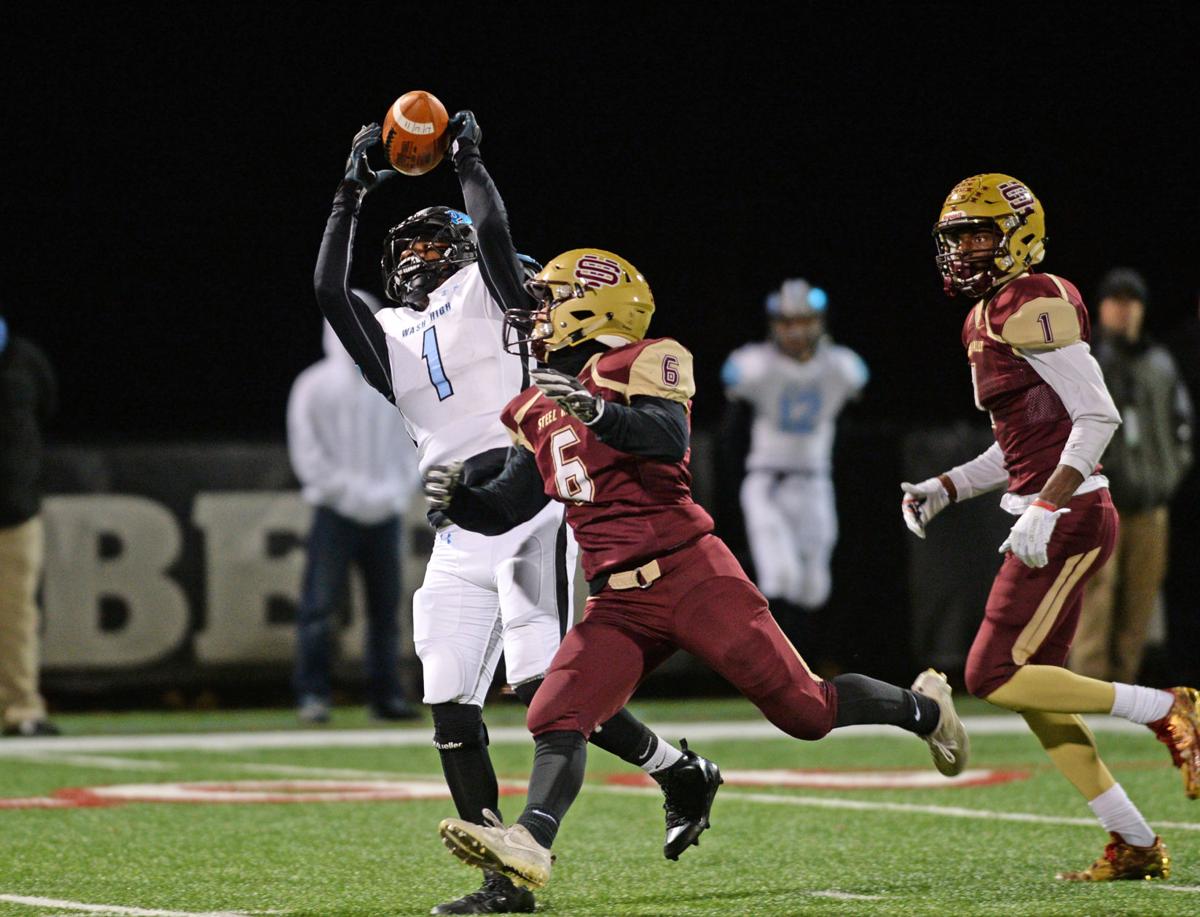 Washington’s Zahmere Robinson has 47 catches for 1,094 yards for the Prexies this season. Washington plays Steel Valley in a WPIAL quarterfinal game tonight. 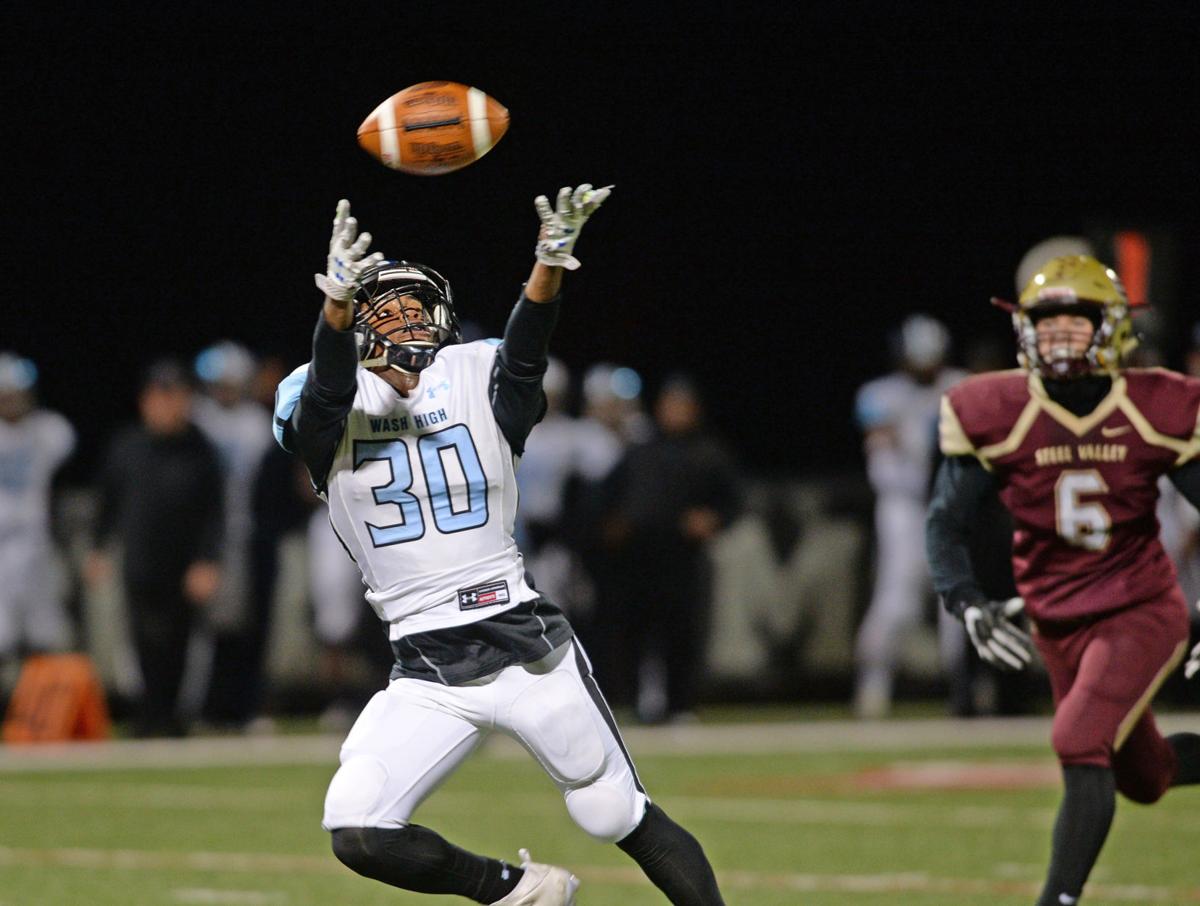 Washington’s Andre Jennings goes up for a catch as Steel Valley’s Ray Chuba closes in during the WPIAL Class 2A title game at Robert Morris University.

Washington’s Isaiah Schoonmaker, a Miami of Ohio recruit, was one of five local players named to the Pennsylvania Football Writers All-State Team.

Washington’s Zahmere Robinson has 47 catches for 1,094 yards for the Prexies this season. Washington plays Steel Valley in a WPIAL quarterfinal game tonight.

Washington’s Andre Jennings goes up for a catch as Steel Valley’s Ray Chuba closes in during the WPIAL Class 2A title game at Robert Morris University.

However, it wasn’t only the Prexies’ explosive offense in the second half that gave them their first WPIAL crown since 2001 and their seventh outright title in school history. Without a bend-but-don’t-break defense in the first half, the course of the second half could have been much different.

With the game scoreless late in the first quarter, top-seeded Steel Valley methodically moved into Prexies territory and faced a first-and-goal from the 1-yard line. The No. 2-seeded Wash High defense, aided by a Steel Valley (11-1) false start, stood tall to stopped the Ironmen on four straight downs to keep the game scoreless.

Then, with only two minutes left in the first half and the game tied at 7-7, the Wash High (13-0) goal line defense worked its magic again, stopping the Ironmen on three straight plays inside the 6-yard line to force a 20-yard field goal.

If not for the stout defense, the Prexies, rather than being tied 10-10 heading at halftime, were only a few yards away from being down two scores.

“It’s been a group that all year long has wanted this,” Wash High head coach Mike Bosnic said. “They’ve worked extremely hard to get here, and they weren’t going to be outworked tonight.”

Senior Isaiah Schoonmaker chalked up the defensive stops to his team simply “wanting it more.”

With the win, Wash High advances in the PIAA playoffs to take on Wilmington, the District 10 champion, in the semifinals next weekend. The date, time and location are to be determined.

On Wash High’s first drive of the game, sophomore quarterback Zack Swartz was intercepted by Trevon Adams on a third-and-long. Later in the first quarter, Adams, the leading receiver and second-leading rusher for the Ironmen, broke his right arm and missed the rest of the game.

“He’s one of the best players in Double-A football,” said Steel Valley head coach Rodney Steele. “When you take him out of the lineup, that’s a hard player to replace at any level.”

After the Prexies' defense stopped Steel Valley on the goal line in the first quarter, Wash High went 99 yards for the game’s first score. After Swartz scrambled for a 60-yard gain, running back Nick Welsh capped off the drive with a 10-yard rushing touchdown.

Steel Valley then went three-and-out on its next drive, but senior Amonte Strothers took the long snap for the punt and, instead of kicking it, ran 70 yards for Steel Valley’s only touchdown.

After Wash High’s second goal line stop and with the Prexies trailing 10-7, Swartz found Zahmere Robinson for a 53-yard gain to put the Prexies in field goal range. Junior kicker Lilly Christy then nailed a 26-yard field goal to tie the game going into halftime.

Both teams traded punts to start the second half, but Steel Valley’s punt, the latter of the two, was blocked by Schoomaker and returned 39 yards by junior Dan Walker to put the Prexies up 16-10.

“I think the blocked punt was the momentum changer in the second half,” Steele said. “We gave them that quick score.”

Schoonmaker, who has committed to Miami (Ohio), then ran for a 68-yard touchdown run. Schoonmaker connected with Swartz on a trick play to convert the two-point conversion and put the Prexies ahead 24-10.

Early in the fourth quarter, Wash High senior Curtis Gardner intercepted an errant Karfelt pass. Gardner, who totaled 109 yards rushing, then ran 75 yards to put the Prexies in the red zone. The drive was capped off by a 4-yard pass from Swartz to Schoonmaker.

With only a few minutes left in the game, Schoonmaker intercepted a pass from backup Steel Valley quarterback Ronnell Lawrence.

“(Isaiah) really came through for us tonight,” Bosnic said. “Offensively he made a couple huge plays, and defensively he was amazing.”

Welsh, who finished with 104 yards rush and eclipsed 2,000 yards on the season, then ran for a 30-yard touchdown to seal the WPIAL title for the Prexies.