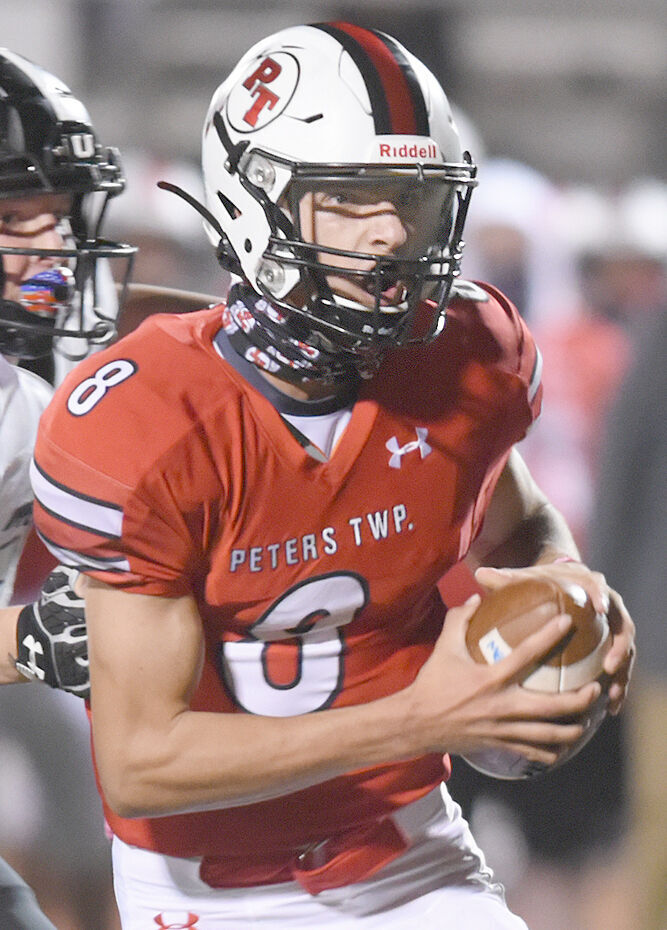 Quarterback Logan Pfeuffer led Peters Township’s second-half comeback in the WPIAL Class 5A semifinals against Gateway. It landed the Indians a spot in the championship game opposite Pine-Richland.

Quarterback Logan Pfeuffer led Peters Township’s second-half comeback in the WPIAL Class 5A semifinals against Gateway. It landed the Indians a spot in the championship game opposite Pine-Richland.

They have been friends for a long time but never competitors against each other except on the wrestling practice mat.

The hot sweaty room of Quest Wrestling Club was where they locked horns.

“We wrestled before but we’ve never wrestled in high school,” said McMillon. “I’ve always been a little up (in weight). He was 152 when I was 160. It’s always been real close but never the same.”

Neither McMillon nor Spencer won wrestling titles. McMillon was runnerup last season at 182, losing to Gerit Nijenhuis of Canon-McMillan in the finals.

The match marked the first time in PIAA history that two Washington County wrestlers met in the state finals.

Spencer took fourth place in the 152-pound weight class, losing to Matt Lackman of Bethlehem Catholic in the third-place bout.

There will be no weight classes Saturday, and the one-on-one battles are slightly different. Spencer can’t catch his own passes or take his own handoffs. McMillon needs others to play well to be effective, too.

But it should be a very interesting matchup.

The Indians allow only 10.9 points a game and have held five of eight opponents to a touchdown or less.

Pine-Richland averages a whopping 50.3 points per game over its eight straight victories. Only Central Valley (53.6) and Clairton (54.3) average more. Seven of Pine-Richland’s games reached the Mercy Rule, including last week’s 49-14 victory over Penn-Trafford in the semifinals.

So what will the game come down to?

“I think it’s who can take care of the football,” said Peters Township head coach TJ Plack. “If they are able to take care of the football, they have a very explosive offense. That puts them in the driver’s seat. But on the other hand, if we don’t turn the ball over, with our defense they way they play, we can keep the score close. That’s what we’re looking for. Offensively, we just need to keep the ball moving.”

Spencer is 212 passing yards away from the top 10 of the WPIAL. He is in 12th place right now. Spencer completes 74 percent of his passes and has 27 touchdowns in just eight games. Most of his time this season has been spent on the bench in the second half because of the lopsided scores.

His counterpart on Peters Township, Logan Pfeuffer, has completed 72 of 123 passes for 1,110 yards and nine touchdowns. He averages five yards every time he rushes the football (37 attempts for 185 yards). Pfeuffer runs hot and cold. He threw for three touchdowns in the second half against Gateway after being shut out 19-0 in the first half.

Pine-Richland likes to use numerous tailbacks. Tristen Taylor (326), Caden Sweiger (321) and Jordan Burns (315) have combined for 962 yards and 10 touchdowns.

Pine-Richland head coach Eric Kasperowicz did not return phone messages for comment on the game.