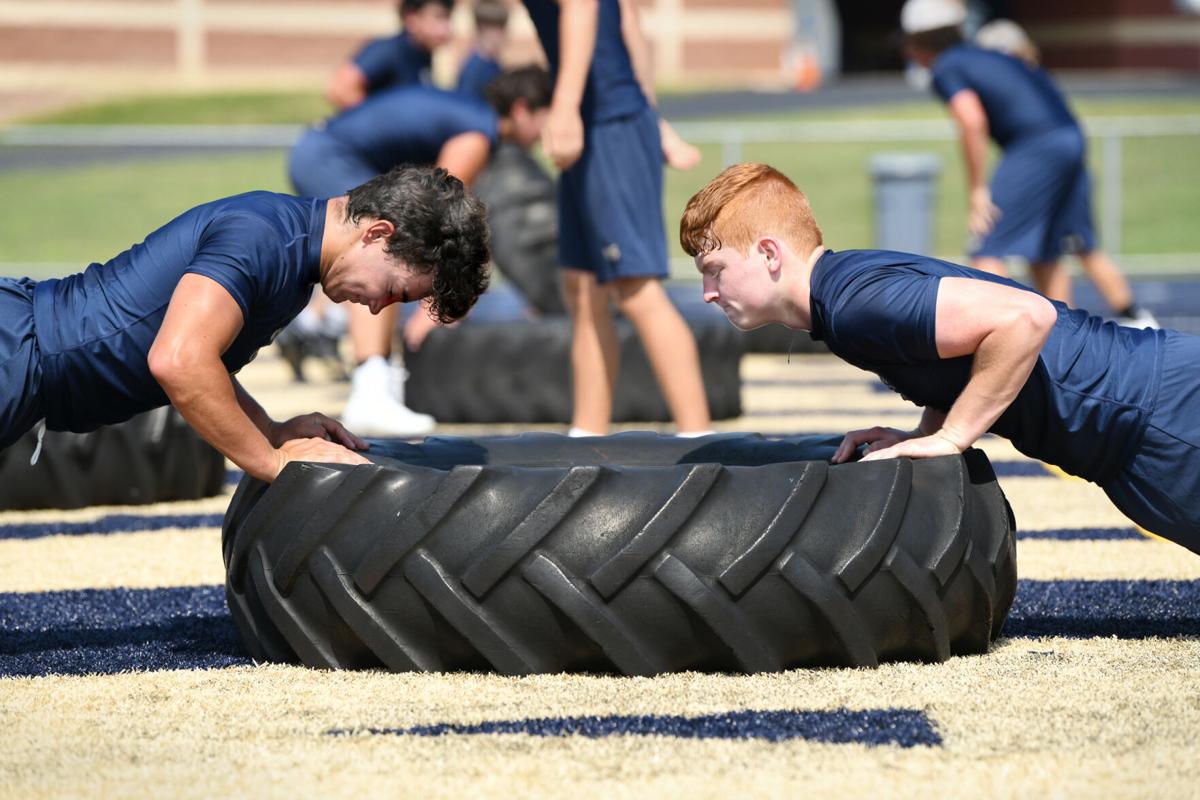 This is not your normal football drill that is being conducted at McGuffey.The Highlanders’ Nate Romestan, left, and Phillip McCuen condition by doing pushups after flipping the tractor tire to each other. 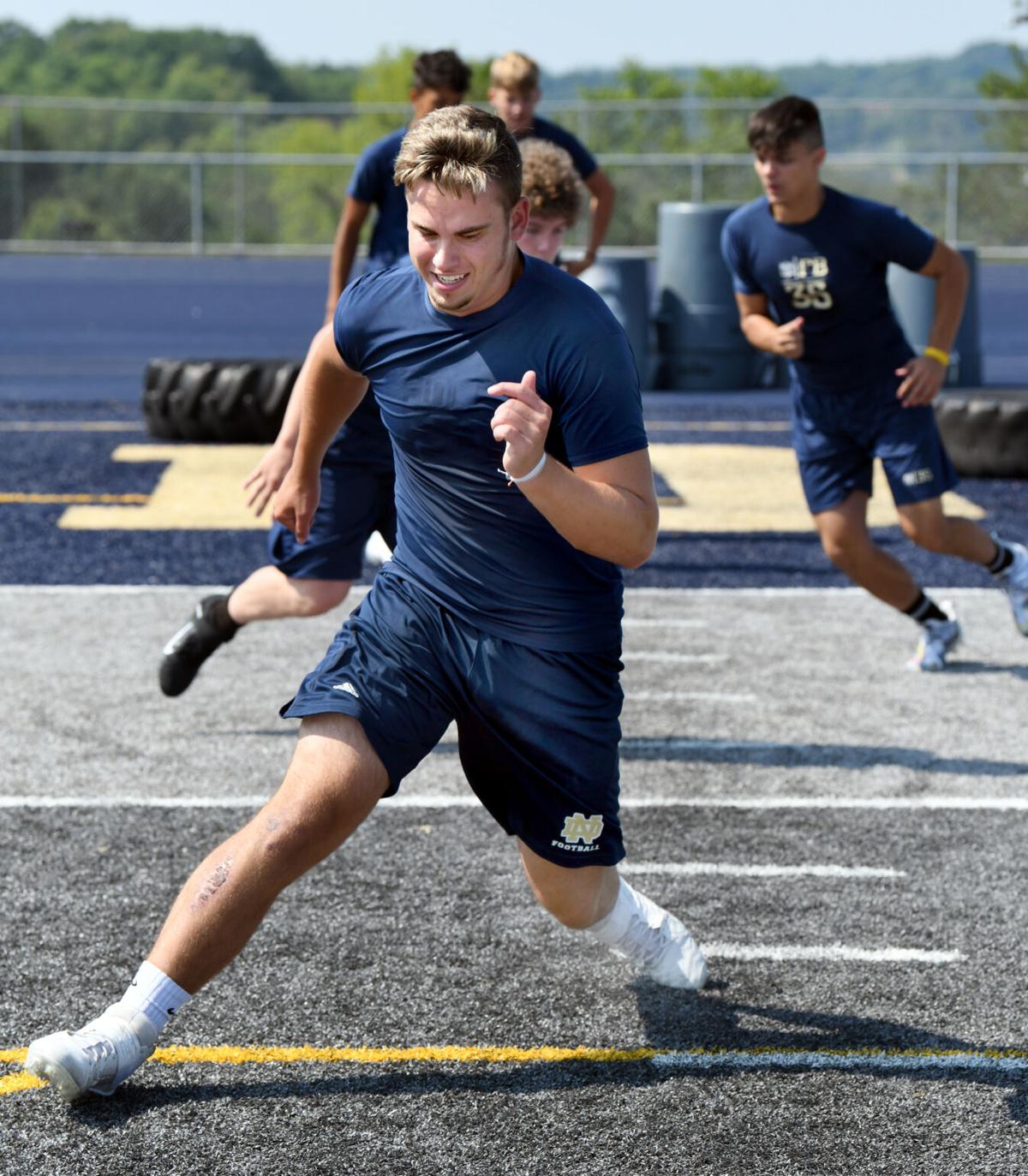 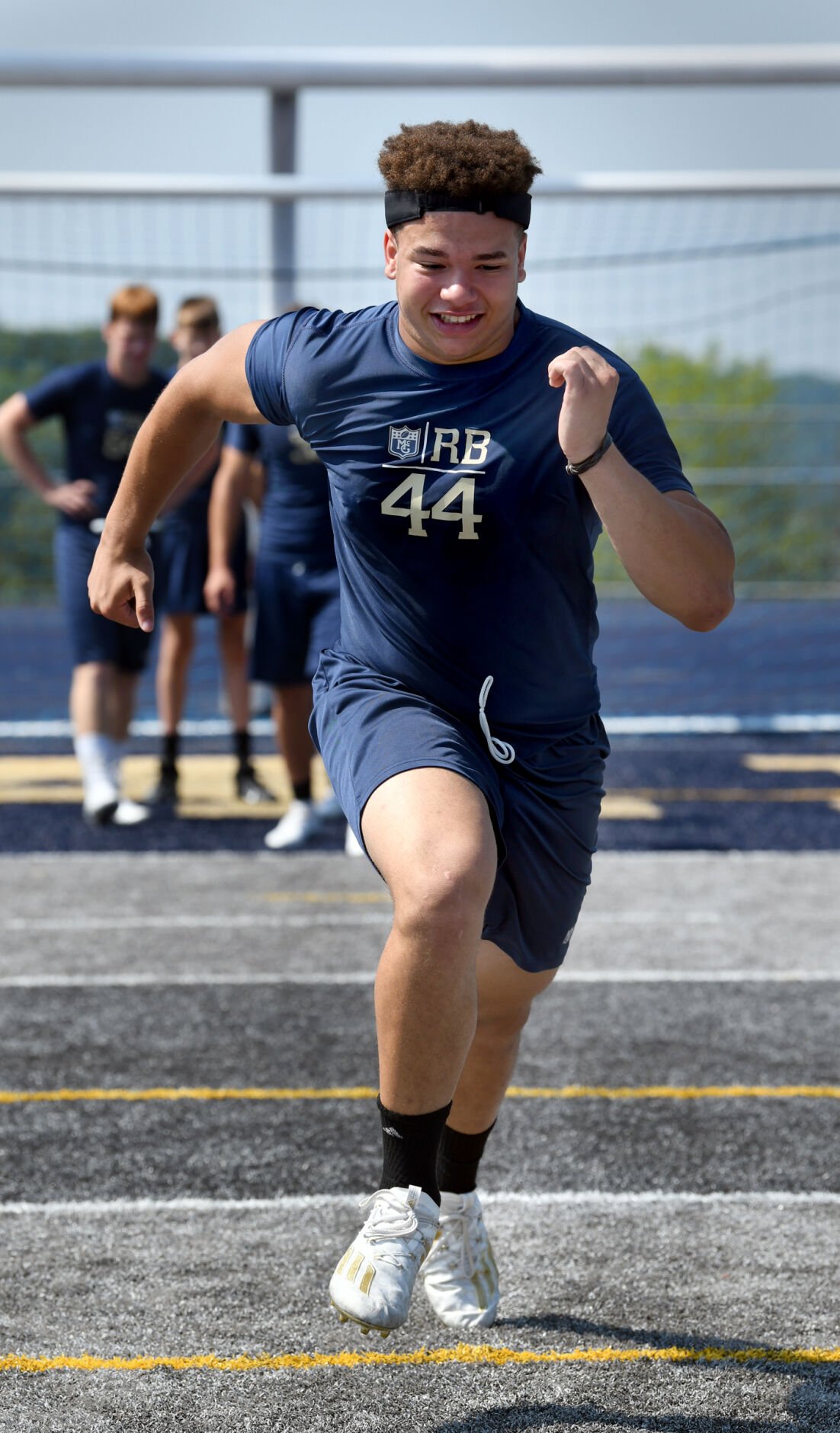 Jeramiah Johnson leads his teammates through conditioning sprints as the Highlanders prepare for the season. 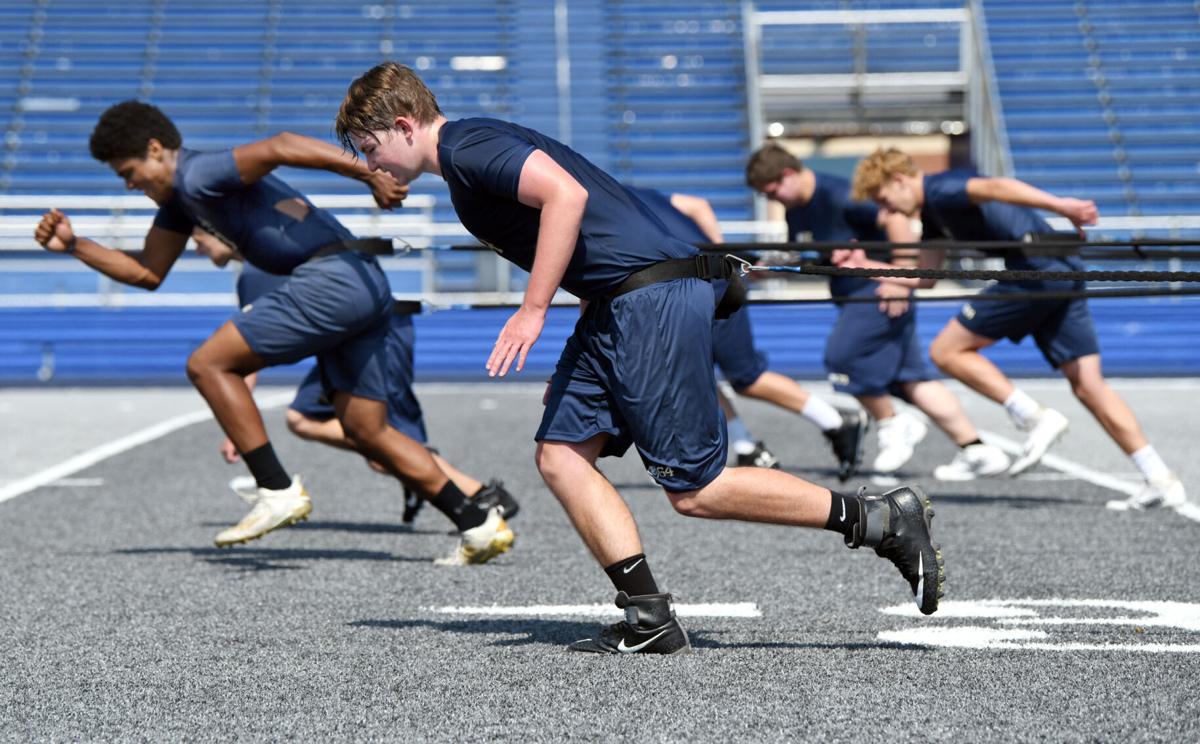 Jayden McConnell, center, and his teammates sprint while tethered to a partner as the Highlanders train for the season. 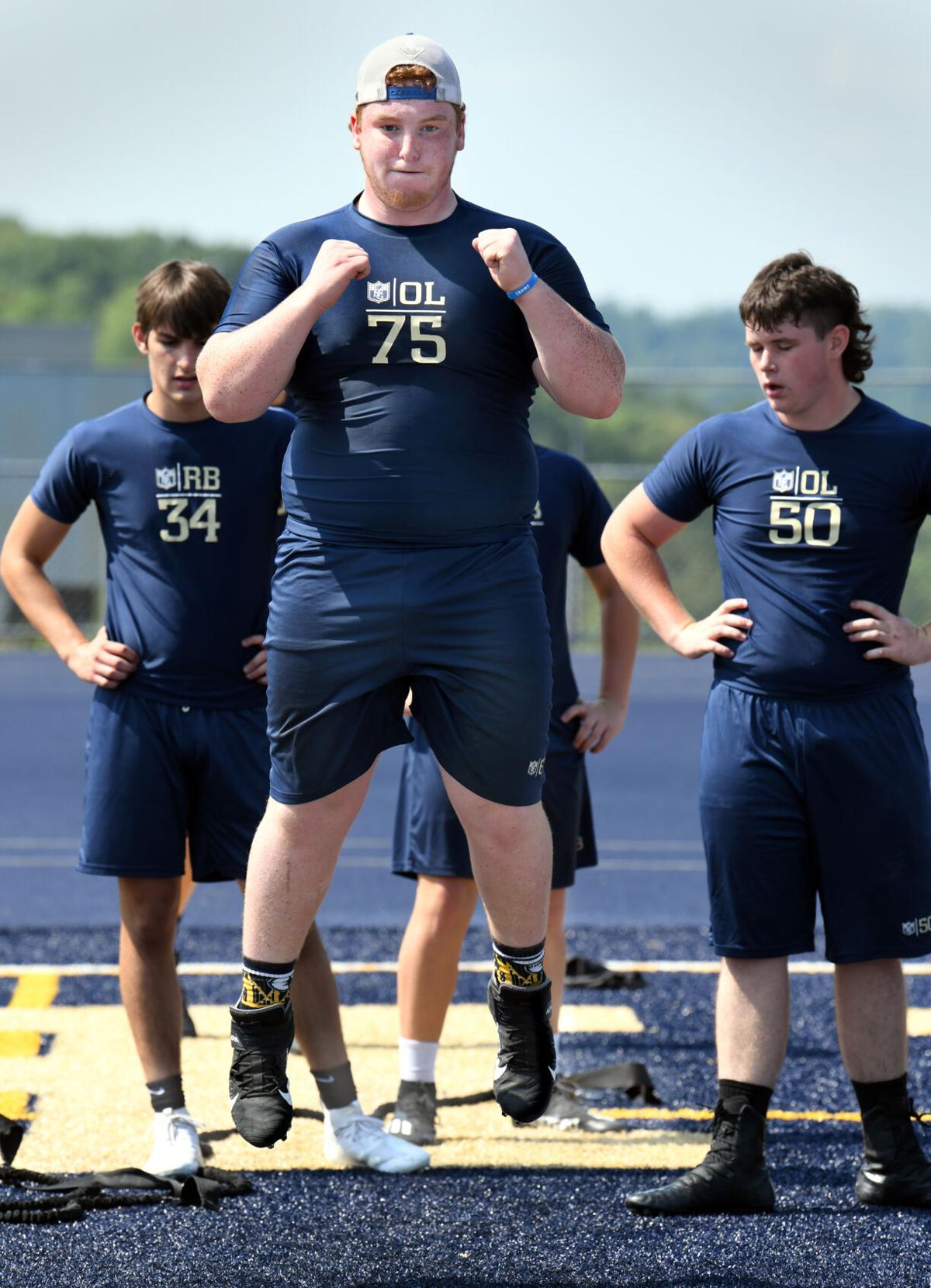 Troy Falosk (50) demonstrates how players make improvementrs by leaps and bounds as he and Dylan Droboj (34) and Logan Smith (50) condition for the season.

This is not your normal football drill that is being conducted at McGuffey.The Highlanders’ Nate Romestan, left, and Phillip McCuen condition by doing pushups after flipping the tractor tire to each other.

Jeramiah Johnson leads his teammates through conditioning sprints as the Highlanders prepare for the season.

Jayden McConnell, center, and his teammates sprint while tethered to a partner as the Highlanders train for the season.

Troy Falosk (50) demonstrates how players make improvementrs by leaps and bounds as he and Dylan Droboj (34) and Logan Smith (50) condition for the season.

CLAYSVILLE – A pair and a spare.

No, it has nothing to do with a poker hand or tires for your car.

It’s a phrase that McGuffey head coach Ed Dalton likes to use these days. Though he doesn’t claim to be the author of the saying, Dalton admits it’s the first time in his 10 years at McGuffey that the terminology fits the Highlanders.

“A pair and a spare. That means you have two guards, two wide receivers, two cornerbacks, two … and somebody experienced and capable as a backup,” Dalton explained. “Bill Elder, the longtime coach at Mt. Pleasant, used that saying. The first year I was there, he’d see me in the hallway and ask me every day if I had a pair and a spare for each position. About the seventh week, I finally said, ‘Coach, I think we finally have a pair and a spare.’ So Bill said, ‘Then you’ll be all right.’ The next year, I told him I had a pair and spare after the first scrimmage and he told me he’d see us at Heinz Field.”

McGuffey, which won the Class 2A Century Conference title and had a 6-2 record last year, has its deepest team ever under Dalton, thus the pair and a spare catchphrase. The Highlanders have eight starters back from a defense that had two shutouts and allowed only three opponents to score in double figures. The offense returns only five starters, though many first-time starters received significant playing time during the past two seasons as backups.

“It’s deep talent,” Dalton points out. “Though we graduated a decent amount of linemen, these linemen all played a lot. … It’s almost a blessing that we don’t have a lot of seniors because of the depth of talent at the next three grades is unbelievable. Our juniors, sophomores and freshmen never lost a youth game, never lost a middle school game.”

McGuffey’s triple-option offense has two returning starters at running back, senior Jeremiah Johnson and junior Kyle Brookman. Both are big-play producers. Either junior Phillip McCuen or freshman Logan Carlisle will move into the quarterback spot.

“It’s going to be a battle,” Dalton said. “Phillip is super smart and tough. He’ll do anything you ask of him. He’s an option guy. Logan is really good, too. He’s fast, he can throw it and is football smart. He doesn’t have as many reps as Phillip, but both guys understand the system.”

The line returns starters Evan Brookman and Troy Falosk at the guard spots. Evan Janovich and Travis White are back at split end.

“We’re more athletic this year,” Johnson said. “We have a lot of skilled players and more depth.”

The Highlanders have switched their defense to better fit their personnel, opting for a three-man front that includes Brookman and Falosk at the ends. Johnson, Tristan McAdoo and Eric Donnelly are back at the linebackers, and the Highlanders return Christian Cipoletti, who started last year but broke his collarbone in the season opener. He was a defensive end last year and will play inside linebacker this fall.

Cipoletti thinks the defense could make the difference come November.

“Defensively we’re strong,” Cipoletti said. “This team can be great if we hold everyone accountable, work hard and play every game like it’s our last. A good year would be a WPIAL championship, but you have to take them one game at a time.”

Ethan Dietrich, Brookman and McCuen are back in the secondary, making this potentially the best defense McGuffey has had during the Dalton tenure.

Though they need to find a kicker, the Highlanders should be solid again on special teams after blocking five punts and three field goals a year ago.

All the pairs and spares has McGuffey thinking championship, but the Highlanders will be tested early. They open Friday at Southmoreland and play at Sto-Rox, last year’s WPIAL Class 2A runnerup, on Sept. 10 before Century Conference play. They also have a difficult nonconference game Oct. 1 at Linsly School in Wheeling, W.Va.

“We think we’re good, but when you get down to it we’re all 0-0,” Dalton said. “We have a challenging schedule and the whole conference is going to be better.

“Repeat and Advance, that’s our motto. Our goal is to make the playoffs. Our second goal is to get a home game. The third goal is to win the conference.”