Micah Finley reacts after scoring one of his four touchdowns last Friday against West Mifflin at Hiller Field. Trinity will be at home again tonight when its plays Washington for the first time since 1999. 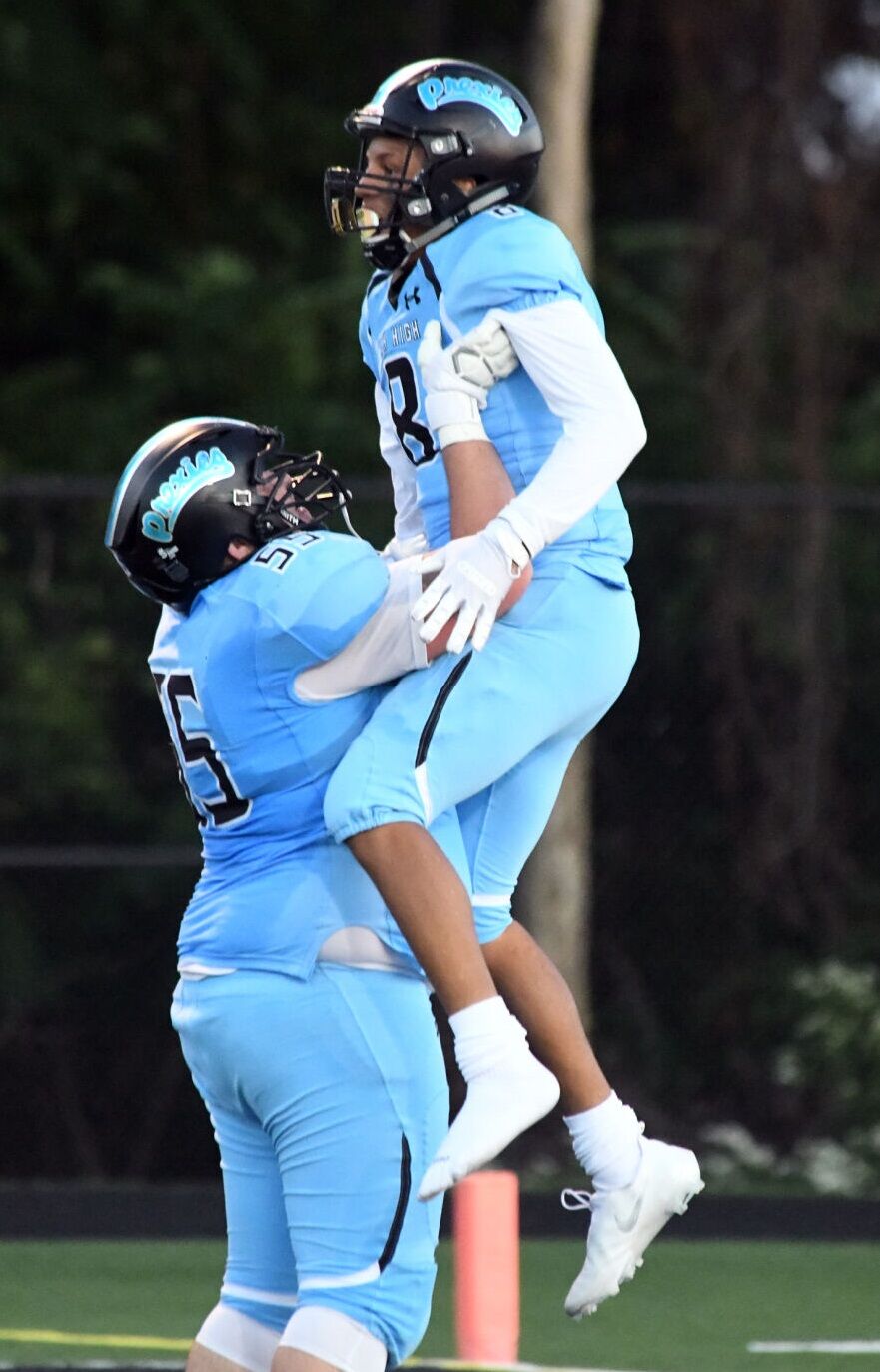 Washington’s Zach Doman lifts running back Tayshawn Levy to celebrate a touchdown Levy scored in a game against Waynesburg. A win tonight for Washington over crosstown rival Trinity would be uplifting as the Little Prexies make a push for the WPIAL Class 2A Playoffs.

Mark Marietta / For the Observer- Reporter

Micah Finley reacts after scoring one of his four touchdowns last Friday against West Mifflin at Hiller Field. Trinity will be at home again tonight when its plays Washington for the first time since 1999.

Washington’s Zach Doman lifts running back Tayshawn Levy to celebrate a touchdown Levy scored in a game against Waynesburg. A win tonight for Washington over crosstown rival Trinity would be uplifting as the Little Prexies make a push for the WPIAL Class 2A Playoffs.

Mark Marietta / For the Observer- Reporter

To call it a rivalry seems a bit presumptuous, considering the circumstances. Sure, Washington and Trinity high schools fit the definition of the word, but so too did the Harlem Globetrotters and Washington Generals.

This pairing may be less one-sided, but only slightly so. And the Globetrotters and Generals played each other much more frequently.

The football teams at Washington and Trinity have met 63 times. The Little Prexies hold a 44-16-3 edge in the series, which was halted after the game in 1999, a 48-14 Washington victory. The Prexies won each of the last five meetings and 11 of the previous 12.

However, after 20 years of social distancing, Trinity and Washington will finally resume their once-thriving and fierce, if not always competitive, city series by meeting tonight at in a non-conference game at Hiller Field. Kickoff is 7 p.m.

“It’s a rivalry,” Trinity coach Jon Miller admitted, though the rivalry, if not dead, had been lulled into a deep slumber for two decades.

“Yes, it is a rivalry,” Washington coach Mike Bosnic confirmed. “There’s a familiarity. Both schools are in town, the kids know each other. It’s a good game for us.”

This, however, is not your father’s Trinity-Wash High rivalry. Or is it the Wash High-Trinity rivalry?

None of the players in tonight’s games were born when Trinity and Washington last met on the football field.

“They’re across town and I think everyone talks about them a lot more than they talk about us, so there is a little pride factor to this,” Miller said. “It’s something that the players, their fathers and uncles have played in this game. It used to be a big game here and it would be nice to get back out there and restart this rivalry.”

Both teams will start tonight with momentum and a strong belief that it will win. Washington (3-1) has won three in a row and has allowed only 26 points all season. Trinity (2-2) is coming off a 32-5 thumping of West Mifflin and is one deflected pass away from having a winning record.

“In the second half last week, we started becoming who we are,” Miller said. “We ran the ball well, completed some passes and the defense played well the entire game.”

Both defenses have been unyielding. Only Century Conference leader McGuffey generated 100 yards of offense against Washington. Trinity, meanwhile, has allowed only one touchdown in the last two weeks, and that came on a fluke play in a 10-7 loss at McKeesport.

“We were real disappointed after the McKeesport game,” Miller said. “We played great defensively. We couldn’t capitalize on some turnovers they had. Their touchdown pass went through a couple of hands and they had a great bounce into the hands of one of their players.”

Bosnic said he is impressed by what he’s seen on video of Trinity, especially the Hillers’ linemen.

“They cause a lot of problems,” Bosnic said. “I think Trinity is a good football team. They play really good defense, they can run and throw the ball, and they are physical. I like their line play.”

The strong defenses should make life difficult for each team’s offense, which has recently provided many big plays.

Washington’s Mike Allen leads a ground attack that averages 283 yards per contest. Allen ran for 317 yards and three touchdowns in the last two games, and Tayshawn Levy and quarterback Davon Fuse each have three scores. Washington doesn’t throw often, but two of Brandon Patterson’s three receptions have gone for touchdowns and he averages 34.3 yards per catch.

Though Wash High has outscored its last three opponents by a whopping 141-20 margin, Bosnic said his team has been plagued by unforced mistakes.

“We are a work in progress. We have a lot of work to do,” he said. “We have been playing well on defense but there have been a lot of mental mistakes, unnecessary penalties.”

Trinity enters the game with a decided experience advantage over the young Prexies and that has Bosnic concerned.

“We feel like we have a very talented group of kids. We’re excited for the future, but there are so many first-year starters,” Bosnic said. “We had almost no offseason and no 7-on-7s. That couldn’t have happened at a worse time for us. These kids are very raw.”

This game wasn’t originally on the schedule and came about because of a series of odd circumstances, including the coronavirus pandemic, an open date on the schedule for Washington and Uniontown’s decision to not field a football team this fall – a decision that was later reversed.

When the WPIAL released schedules for its members in January, Washington was given an open date today because there is an odd number of teams in the Class 2A Century Conference. The Little Prexies were the only team in the WPIAL that did not have a game scheduled for this weekend. Bosnic, who doubles as Washington’s athletic director, said he spent months searching for an opponent to fill the open date, even advertising the opening in other states but without success.

Then, when Uniontown’s School Board voted in early August to not field teams in the “contact” sports of football and soccer, it left Trinity with an open date in football. Trinity was to play a Class 4A Big Eight Conference game tonight at Uniontown and the cancellation had Hillers athletic director Ricci Rich scrambling to find an opponent.

Thus, Washington and Trinity became the perfect match and the rivalry was revived.