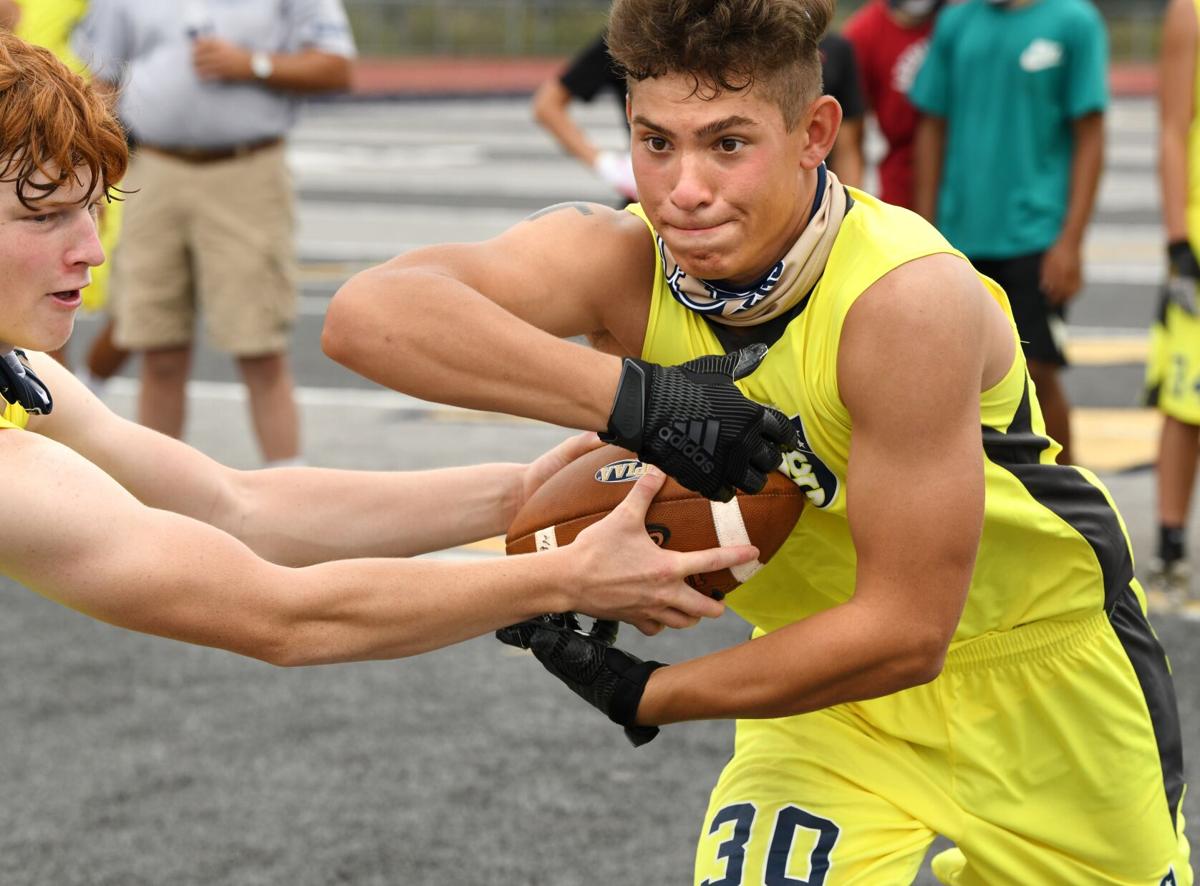 Sophomore running back Eric Donnelley takes the handoff from fellow sophomore Phillip McCuen and looks for the opening. 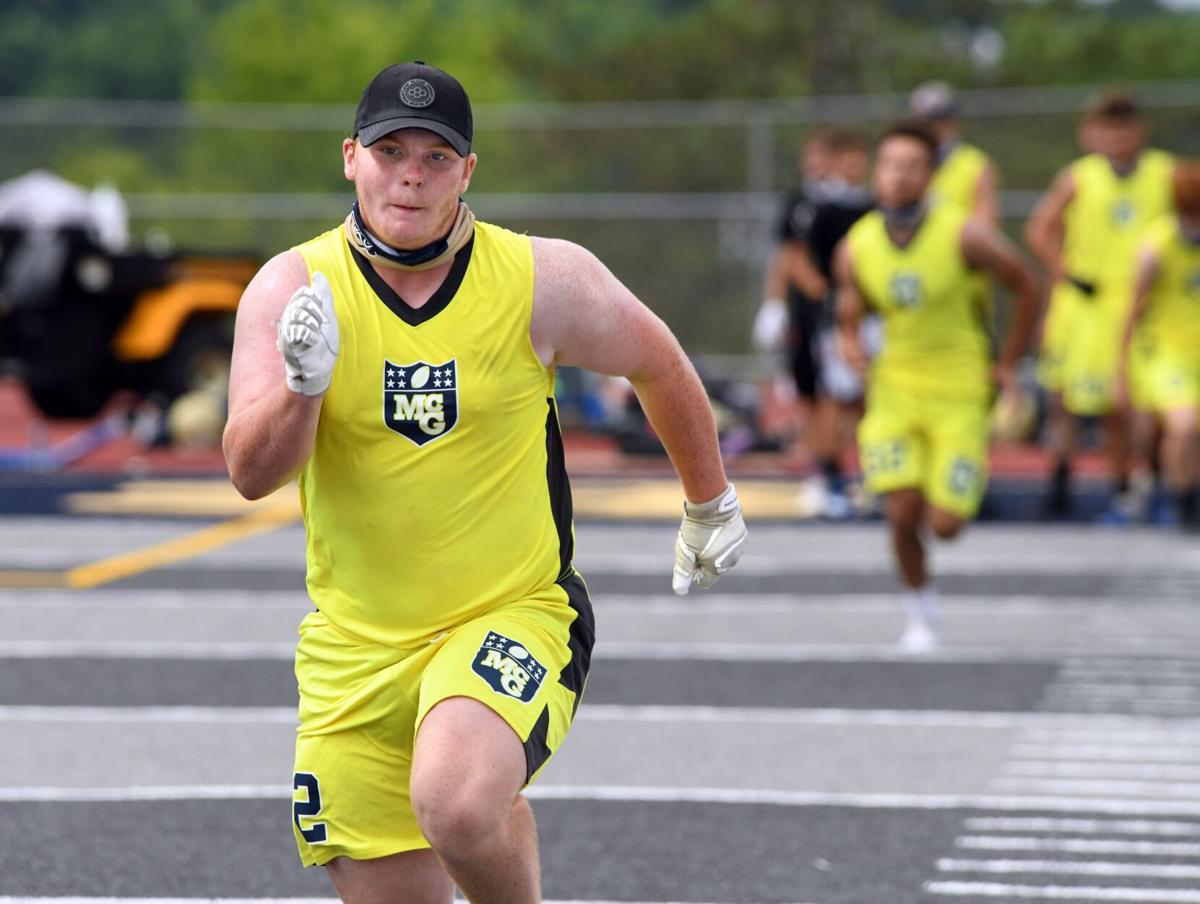 McGuffey senior quarterback and linebacker Rocco Falosk sets the pace as he sprints through the middle of a 100-yard run during summer conditioning. 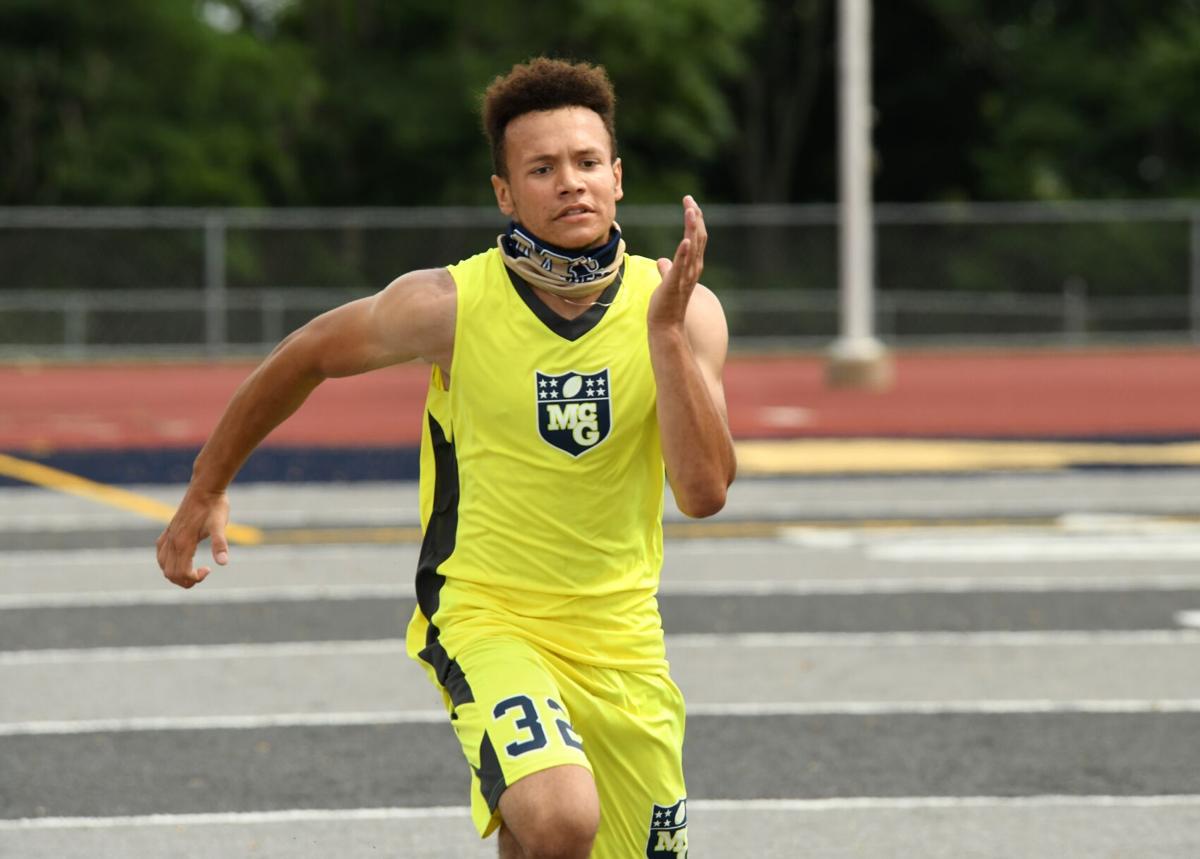 Senior running back Jared Johnson sprints through the middle of a 100-yard run during conditioning for the McGuffey Highlanders' 2020 season. 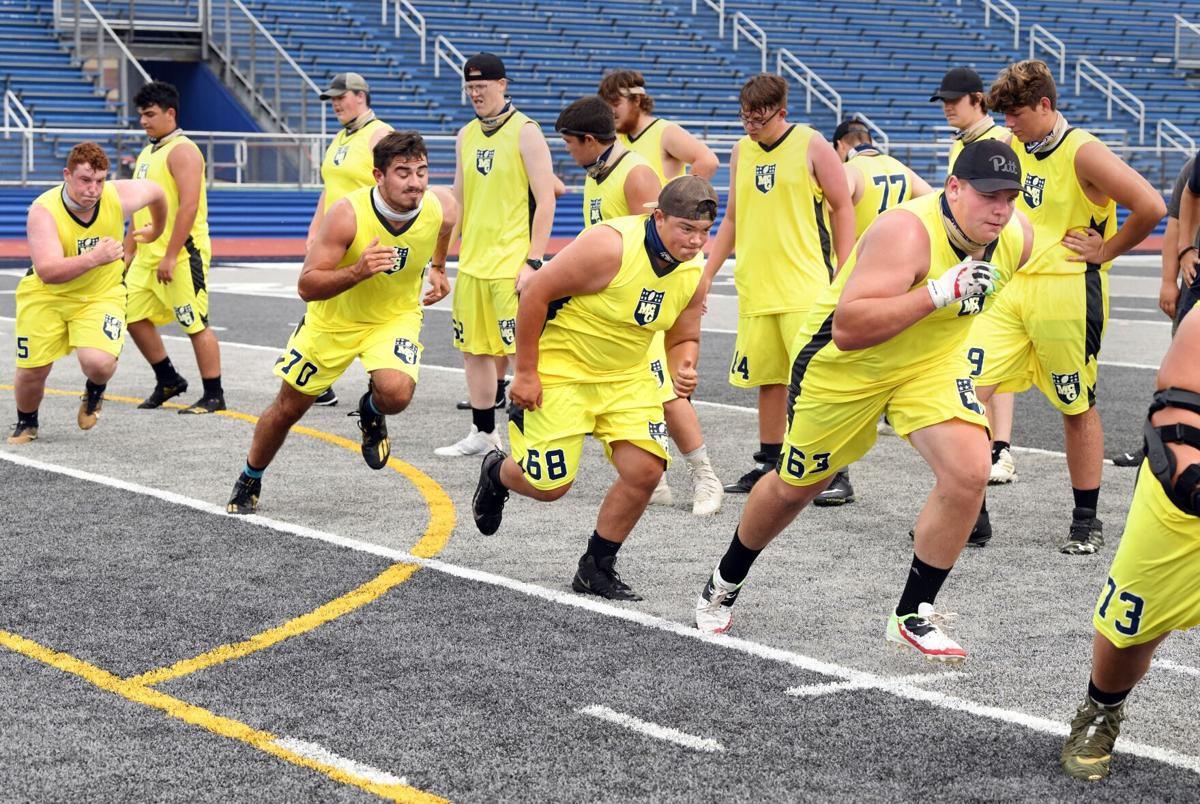 With emphasis on the need for speed, McGuffey seniors Aldan Brookman (70) Grant Brookman (68) and Nathan Cumer (63) press through a summer conditioning workout. 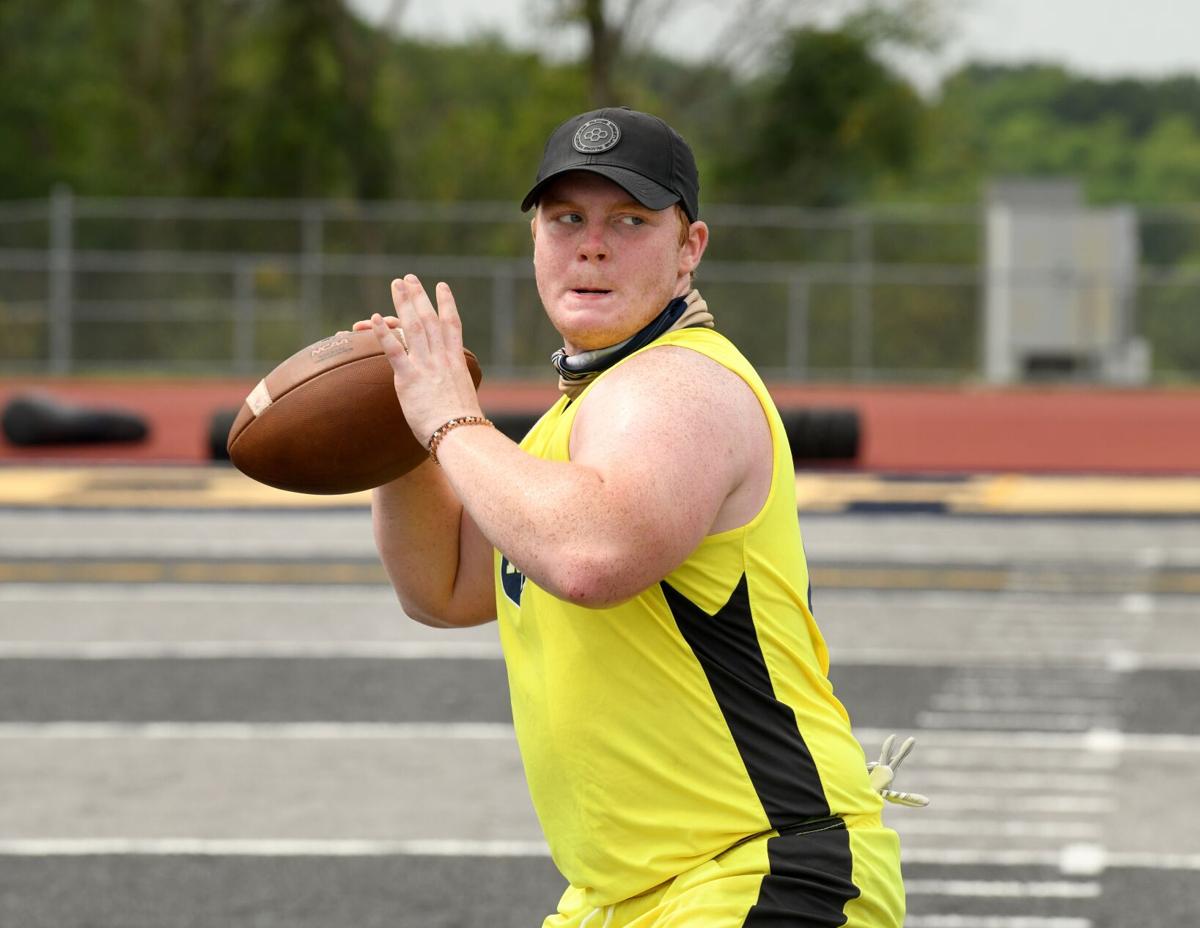 McGuffey senior quarterback Rocco Falosk eyes his target as the Highlanders condition for the 2020 season.

Sophomore running back Eric Donnelley takes the handoff from fellow sophomore Phillip McCuen and looks for the opening.

McGuffey senior quarterback and linebacker Rocco Falosk sets the pace as he sprints through the middle of a 100-yard run during summer conditioning.

Senior running back Jared Johnson sprints through the middle of a 100-yard run during conditioning for the McGuffey Highlanders' 2020 season.

With emphasis on the need for speed, McGuffey seniors Aldan Brookman (70) Grant Brookman (68) and Nathan Cumer (63) press through a summer conditioning workout.

McGuffey senior quarterback Rocco Falosk eyes his target as the Highlanders condition for the 2020 season.

CLAYSVILLE – The first thing you notice at McGuffey High School’s football stadium is the new turf.

Alternating shades of gray, every five yards, from goal line to goal line.

There is no field like it anywhere in the WPIAL.

There are, however, no gray areas in McGuffey’s outlook. The players and coaches know this could be a golden season for the Highlanders.

Expectations are running high out in the country because McGuffey returns one of the most experienced teams in Class 2A and is coming off a nine-win campaign that included eight consecutive victories to start the season. The Highlanders return starters at 16 positions, get a couple other key players back from injuries and add an influx of talent from a junior high team that went 8-0 last year, making McGuffey’s depth a strength.

“All the way up through the program these guys have been successful,” McGuffey coach Ed Dalton said. “They have put in the time. This is the first group that has come up since we combined our youth programs. They’re talented. We’re good at almost every level of the program now. You don’t see us lose often now at the varsity, junior varsity or middle school levels. The culture has really changed.”

Rocco Falosk, who was an all-conference linebacker last year and will be the Highlanders’ starting quarterback this fall, also is impressed by what he sees when he looks around.

“The amount of returning talent is remarkable,” he said. “The experience, the drive, the passion for the game. We have all the components. All the seniors love football. Nobody is hoping the season gets canceled.”

With all the experience, McGuffey should have another explosive offense. The Highlanders’ flexbone attack averaged 39.8 points per game a year ago. Though they lost quarterback Marshall Whipkey and big-play wide receiver C.J. Cole, there is plenty of talent returning, even at those positions.

McKinley Whipkey, a battering-ram fullback, leads the ground game after rushing for 817 yards and scoring 13 touchdowns a year ago. The Highlanders are deep at the running back positions as Nate Yagle (637 rushing yards, 17 receptions and team-high 15 touchdowns) and Jared Johnson (360 rushing yards, 12 touchdowns) also are back. All three players averaged at least at least 6.3 yards per carry.

As the quarterback, Falosk will be counted on take make correct reads and decisions in the option game. He attempted only two passes a year ago, but Dalton likes the senior’s potential.

“We’ll be a ball-control team, but I think we can throw it well,” the coach said. “Rocco doesn’t have the arm that Marshall had or that breakaway speed, but he’s really bright and tough. I don’t know if anyone has ever had four 1,000-yard rushers, but I’m tellin’ you …”

The Highlanders will miss Cole’s size and big-play ability, but they have plenty of potential at receiver in Ethan Janovich and Luke Wagner, the latter a 6-4 senior.

McGuffey has one of the best two-way linemen in Class 2A in senior Aidan Brookman (6-1, 205), and the front lines receive a boost as senior Nathan Cumer (6-3, 245) returns after suffering a season-ending knee injury in the first quarter of last year’s season opener.

“Our offensive line is experienced and big,” Dalton said.

“Offensively, we go into a game knowing we can score on anybody,” Dalton said. “We have to get sound defensively. Explosive plays have hurt us. Sometimes we would get exploited by a good athlete in space and it would lead to big plays.”

McGuffey should be able to cut down on the number of big plays allowed. With Falosk, Johnson and Yagle returning, the Highlanders bring back their top three tacklers from a year ago. Whipkey led the defense in quarterback sacks. Having Cumer and Evan Wright (5-10, 240) healthy and teaming with Aidan Brookman should make the Highlanders strong in the trenches.

“We have a lot of experience. The front seven on defense love hitting people. It’s one of the best and smartest defenses we’ve had,” said Cumer. “Our depth is a strength. We have backups who are good enough to step in and replace a starter if one gets hurt.”

Dalton believes that a team can win as many as two games a year on special teams, and McGuffey should be strong again in that phase. Senior Nate Witowsky could be the best kicker in the Century Conference and Yagle averaged 17 yards per punt return a year ago.

The Century Conference should be highly competitive again. The Highlanders open the season against defending champion Washington and Dalton says Beth-Center should be much improved with Charleroi and Frazier expected to have strong teams.