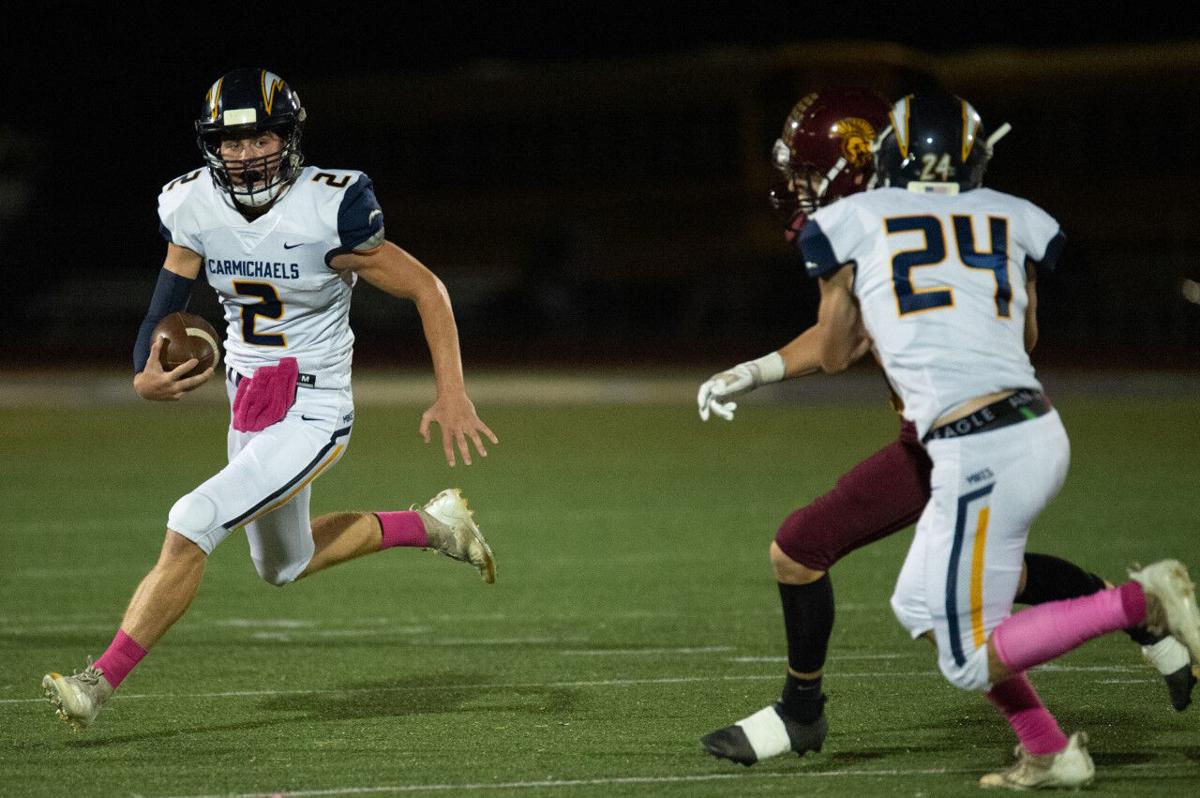 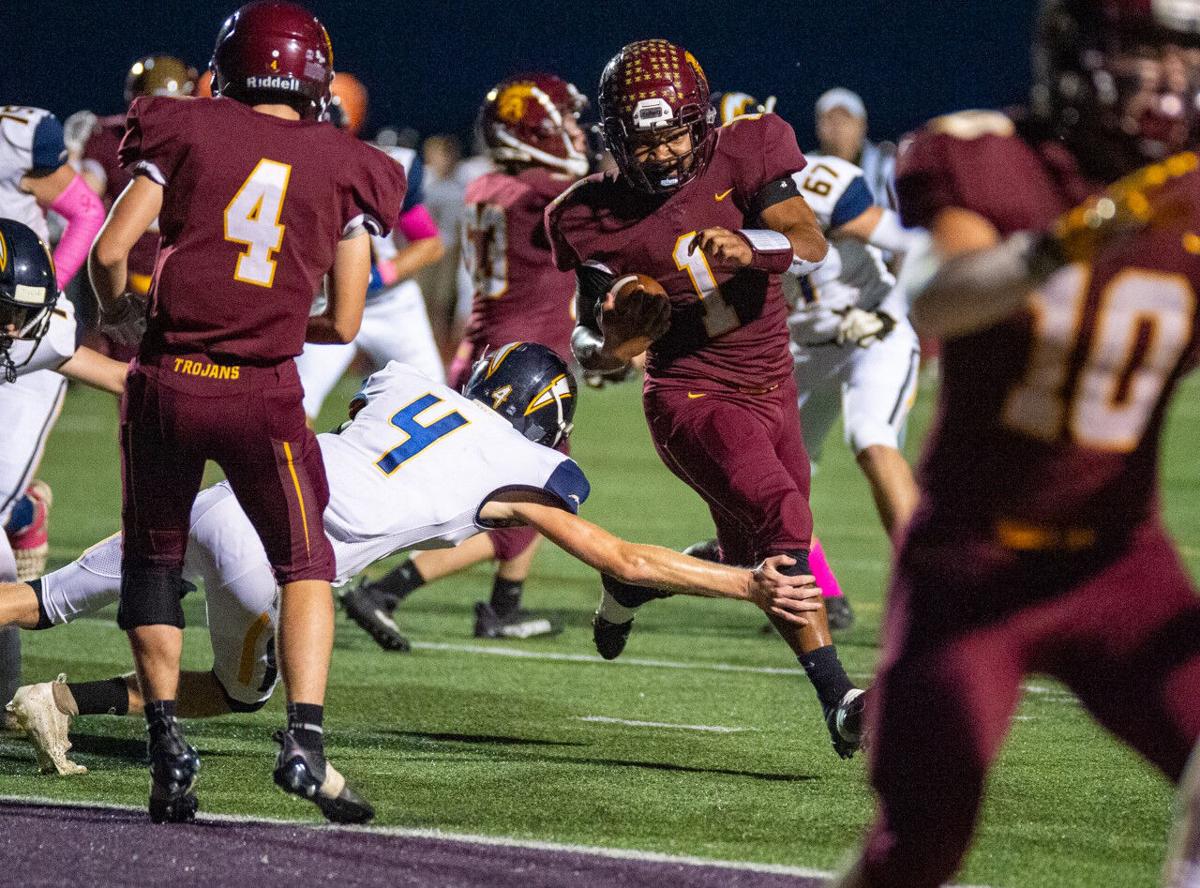 California’s Damani Stafford runs the ball away from Carmichaels Zachary Kerik (4) and into the end zone for a touchdown Friday night at California. 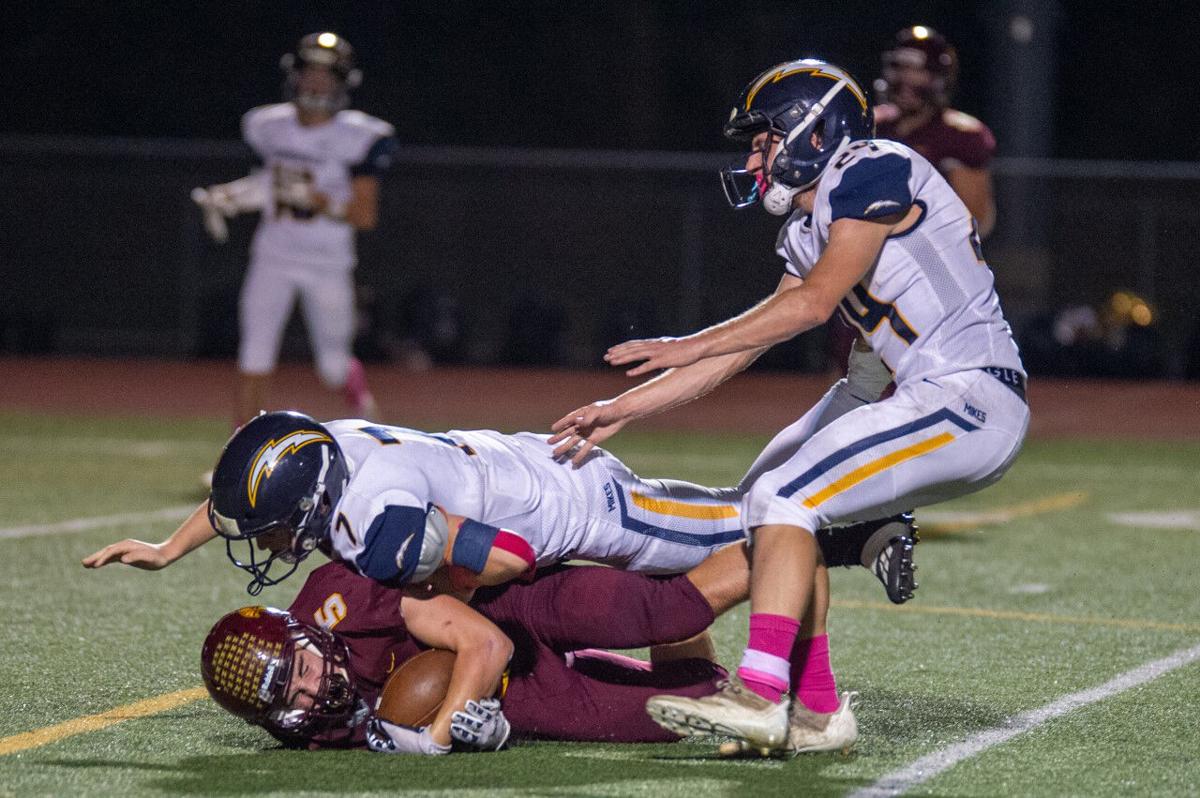 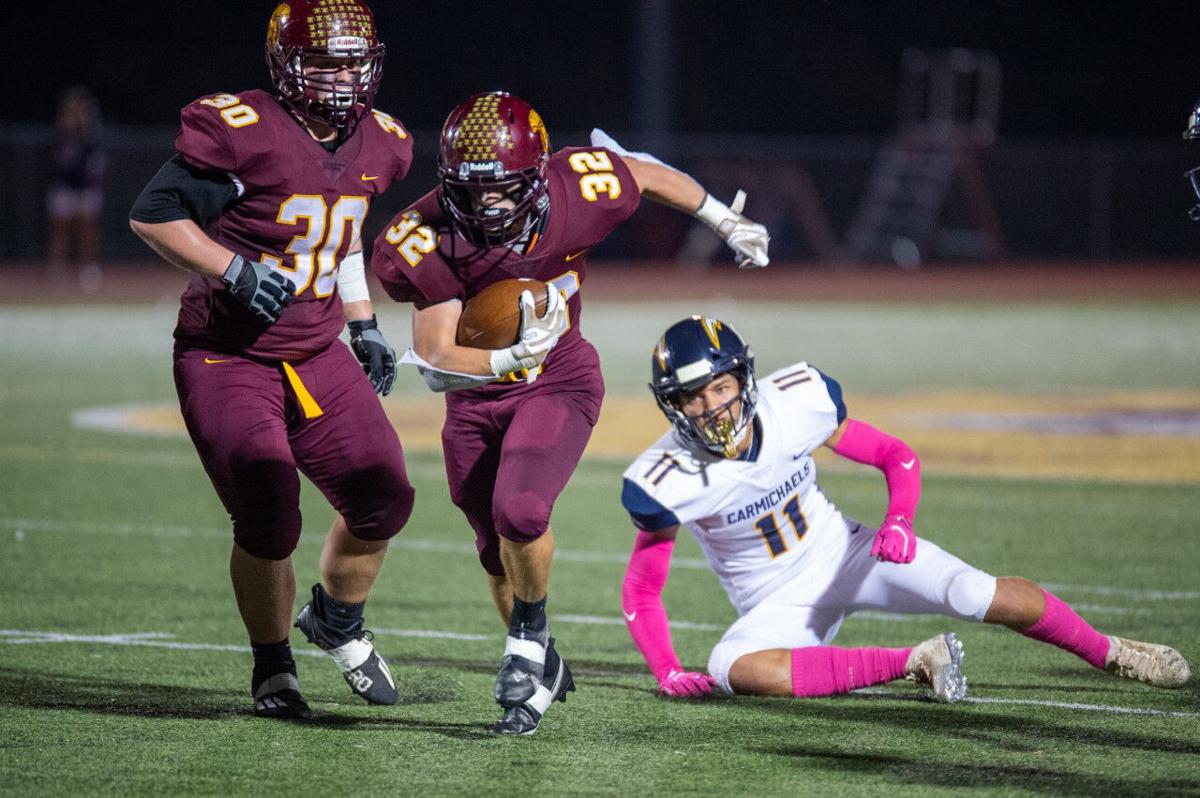 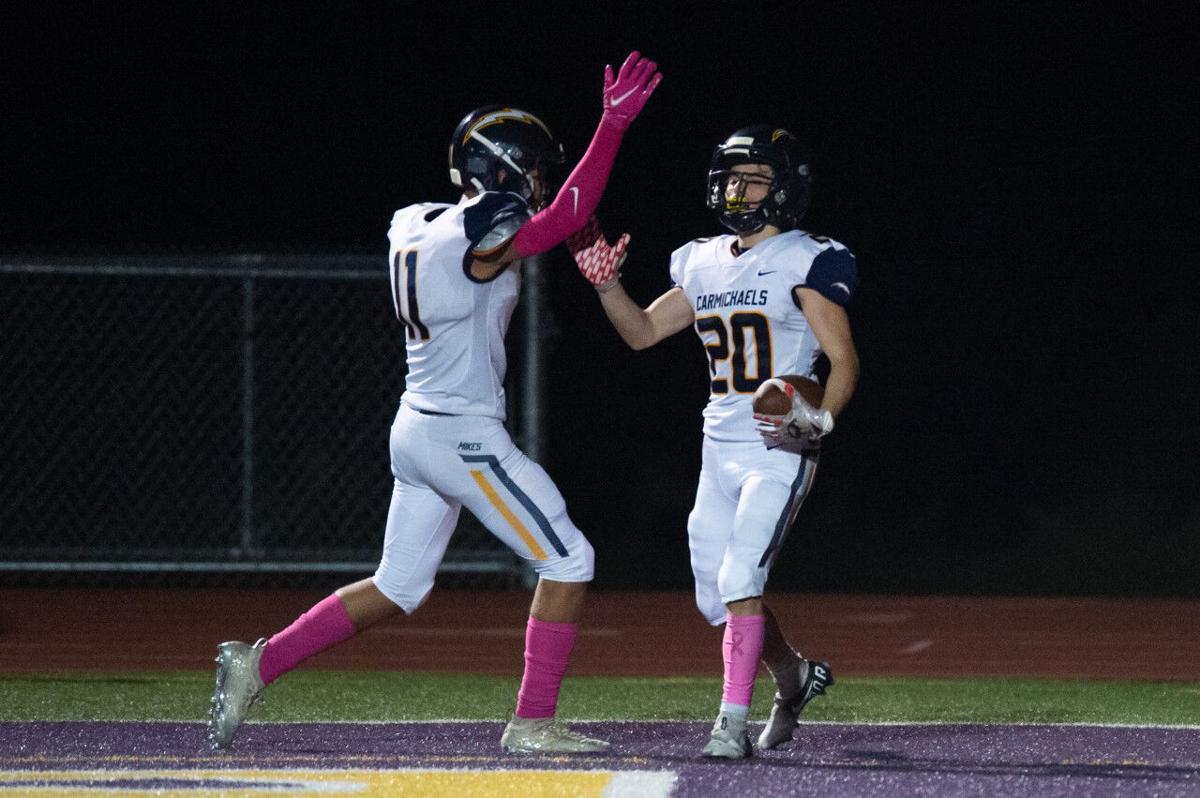 Carmichaels’ Peyton Schooley is greeted by Tyler Richmond (11) in the end zone after scoring a touchdown against California Friday night at California.

California’s Damani Stafford runs the ball away from Carmichaels Zachary Kerik (4) and into the end zone for a touchdown Friday night at California.

Carmichaels’ Peyton Schooley is greeted by Tyler Richmond (11) in the end zone after scoring a touchdown against California Friday night at California.

After the game, both coaches spoke about the outcome.

Carmichaels coach Ron Gallagher was happy with the win and ecstatic with the play of his offensive line.

“It is a good win, and our kids are excited as they got us last year and our kids wanted to get back at them,” he said. “We have been working hard on our offensive line play and I am proud of them.

“We haven’t had great line play, but it is great to see the line gelling.”

“My hat’s off to Carmichaels,” he said. “They had a nice game plan and moved the ball on us.

“We only had three possessions in the second half, and they did a really nice job of controlling the ball.”

Carmichaels quarterback Trenton Carter finished with 236 yards rushing and a pair of touchdowns while throwing for 86 yards. Michael Stewart ran for 124 yards and three scores on only eight carries.

Damani Stafford rushed for 140 yards and a score to lead California.

The Trojans received the opening kick and took a 7-0 lead on a five-yard run by Damani Stafford. The score ended a five-play, 72-yard drive that was keyed by 49-yard run by Stafford.

After the teams exchanged punts, Carmichaels trimmed the Trojan lead to 7-6 when on an 80-yard touchdown run by Michael Stewart.

Stewart’s extra point hit the crossbar and bounced out with 1:14 to go in the first, but it did not take the Mikes long to take the lead.

After recovering a California fumble on the Trojans’ first play, the Mikes went 34 yards on nine plays and scored on a six-yard score by Stewart with 9:00 to go in the first half.

Trenton Carter hit Tyler Richmond for a two-point conversion pass to give the Mikes a 14-7 lead.

The Mikes led until the last minute of the half when the Trojans tied the game with 0:27 remaining.

Hunter Assad scored from one yard out and Cory Frick’s extra point knotted the game heading into the half.

Carmichaels finished the first half with 227 yards on 21 plays while California gained 207 yards on 29 plays. The Mikes had 179 yards rushing on 17 carries while the Trojans gained 165 yards on the ground on 22 carries.

The Mikes took a 20-14 lead on the opening possession of the second half as they went 74 yards on 13 plays. Carter scored from two yards out with 6:58 to go in the third quarter and he scored on a one-yard run with 10:54 left in the game. Peyton Schooley scored the two-point conversion to make the score 28-14.

California’s Connor Vig scored on a one-yard run with 8:14 to go, but the Trojans would get no closer and Stewart scored his last touchdown, a nine-yarder, with 2:40 to play.

In the second half, the Mikes had 233 yards while the Trojans had 53.

Stafford started at quarterback for the Trojans as Hunter Assad was limited due to an injury he suffered last week. However, Woods refused to use the injury as an excuse.

“With Hunter being hurt last week, that is why we came out with Damani and we did a pretty good moving the ball,” he said. “But once we got behind, we felt hunter could throw the ball mor effectively.

“But we had a fumble and a penalty in the first half and a personal foul in the second that is unacceptable. It hurt us. The kids didn’t quit but we didn’t play solid football.”

Gallagher knew the game would be physical.

“(California) is a tough team and we knew it would be a battle,” he said. “We told the team it would come down to hard-nosed football and they came through.”

Both teams are back in conference action Friday as Carmichaels hosts Avella and California is at Monessen.