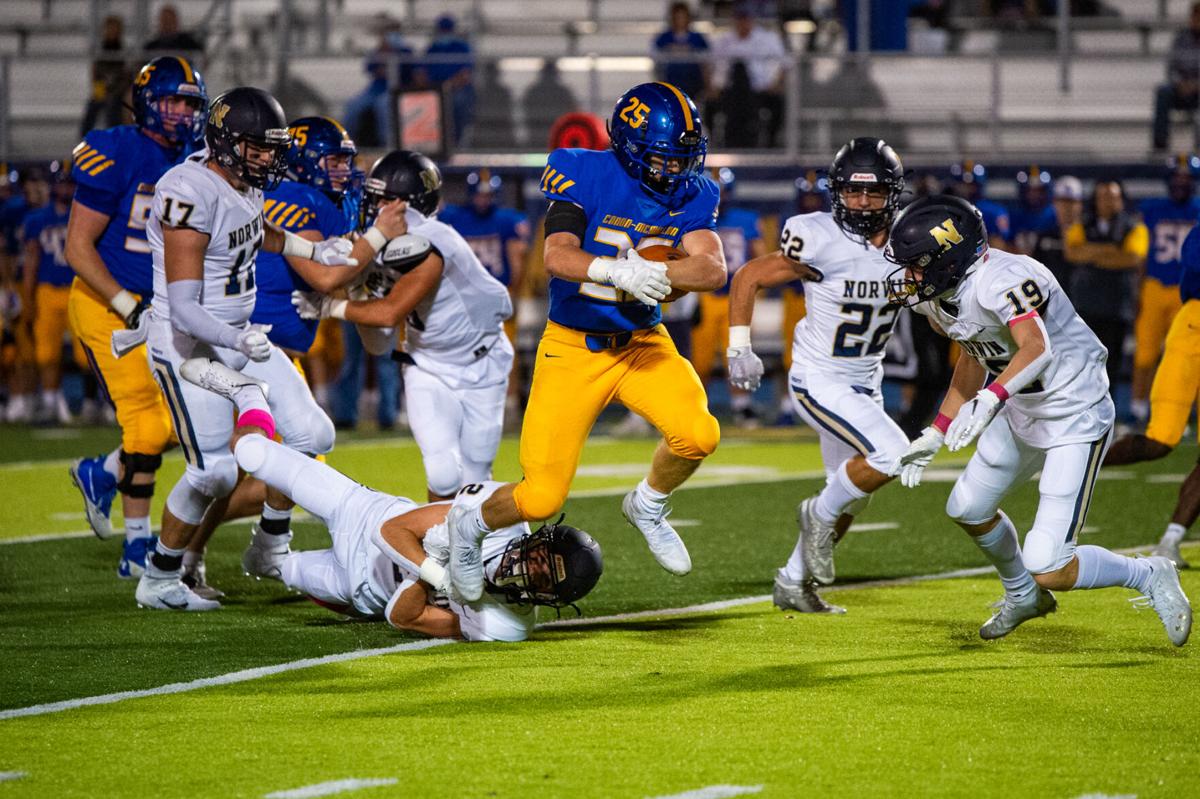 Canon-McMillan’s Ryan Angott (25) runs the ball out of the grip of Norwin’s Connor Chrisman (2) and towards Jackson Pons (19) Friday night. 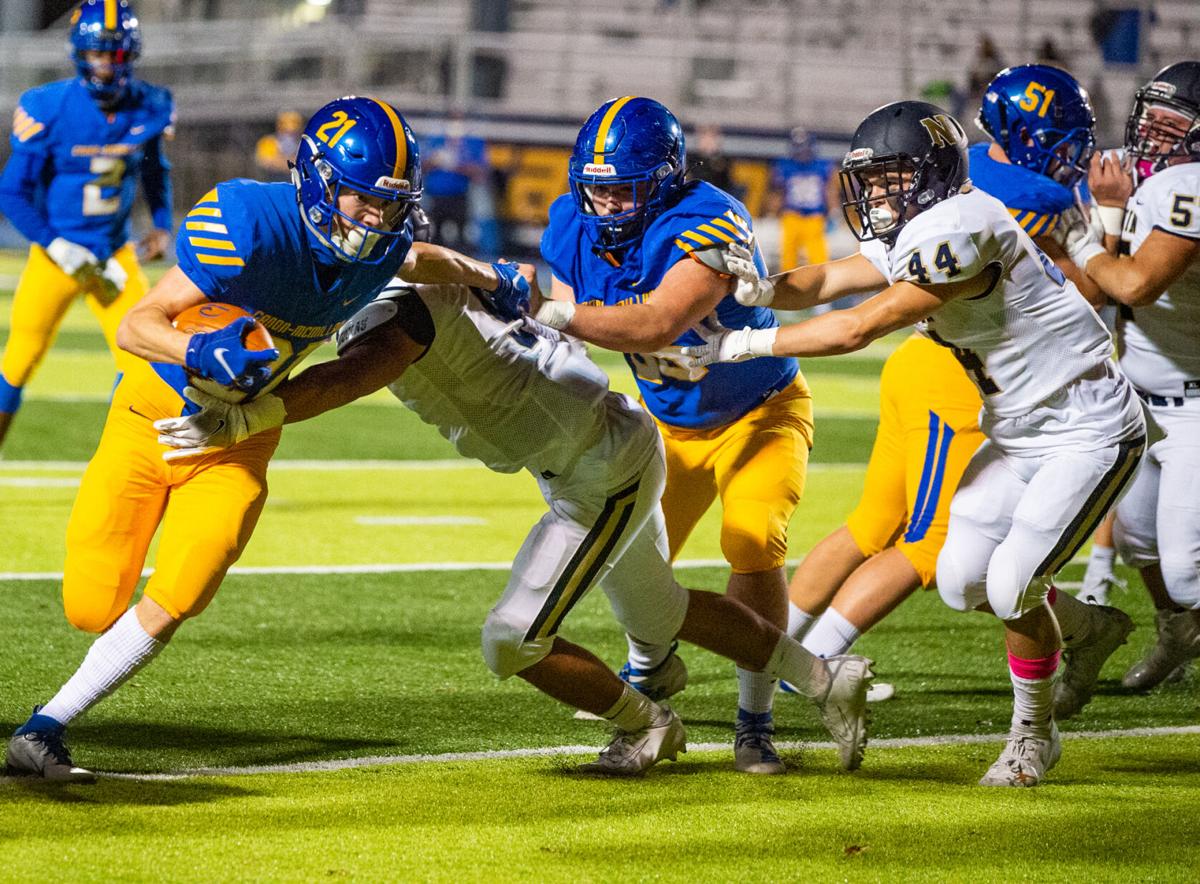 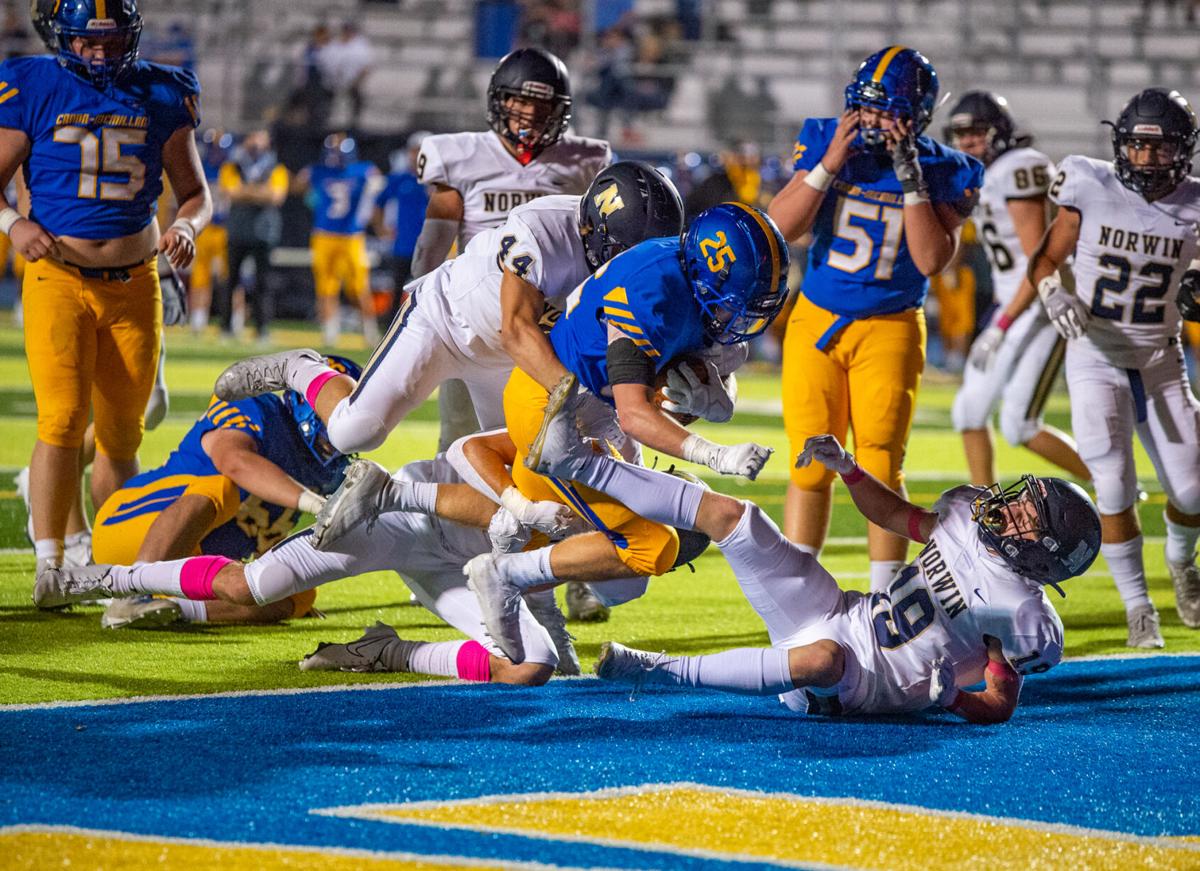 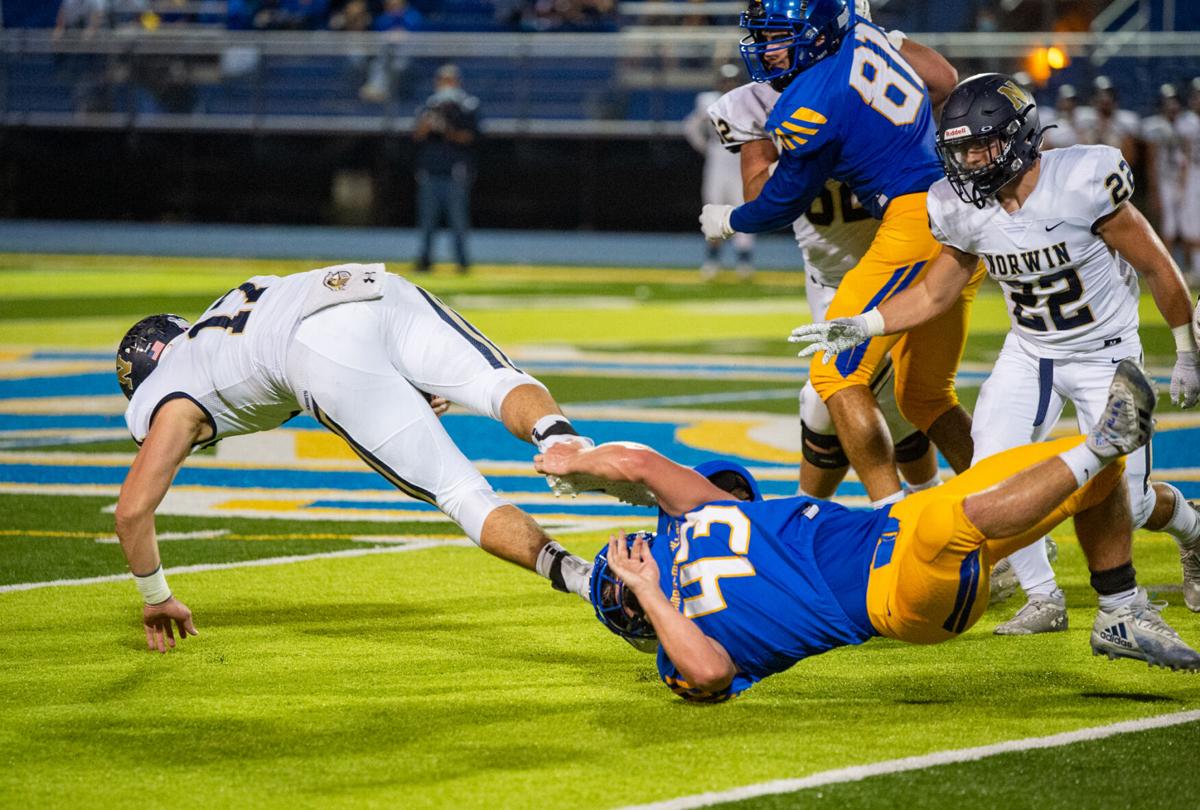 Canon-McMillan’s Alec Blazer (43) brings down Norwin’s Nick Fleming on a play in the second quarter of Friday night’s game.

Canon-McMillan’s Ryan Angott (25) runs the ball out of the grip of Norwin’s Connor Chrisman (2) and towards Jackson Pons (19) Friday night.

Canon-McMillan’s Alec Blazer (43) brings down Norwin’s Nick Fleming on a play in the second quarter of Friday night’s game.

CANONSBURG — Though his team won convincingly, Canon-McMillan coach Mike Evans was not all pleased with his team’s performance, especially on offense.

With their Class 6A postseason aspirations hanging in the balance, the Big Macs took care of business Friday night at Canon-McMillan Stadium by downing Norwin (1-6, 1-6) 35-7. The Big Macs evened their record to 3-3 overall and within the Quad County Conference as they awaited the end of the Mt. Lebanon at Seneca Valley contest.

Unfortunately, for the Big Macs, Mt. Lebanon (4-2) upset Seneca Valley (4-2) with a 28-27 in overtime. Thus, the Blue Devils will likely go on to the postseason while Canon-McMillan’s season seems to have ended Friday night.

Ryan Angott led the charge for the Big Macs to the tune of 168 yards rushing on 26 attempts. However, Canon-McMillan was beset by penalties on offense much of the evening. A fact that did not please their coach.

“I’m really upset with some of the stupid things we did offensively with the bad snaps and penalties,” Evans said. “That’s 35-0 for the defense, offensively we gave them their one score. We had holding calls, jumping offsides. We have to do a better job preparing.”

But he was quite happy with how the defense played asit garnered five quarterback sacks and three interceptions. Norwin was limited to 116 yards total offense.

“Our defense has played well all year,” Evans noted. “Norwin is bigger than us up front. I did think we came off the ball well, especially on the defensive line.”

Dane Matuscin gave the Big Macs a jolt when he received the second-half kickoff, weaved his way through initial resistance and raced 74 yards down the sideline for a score and a 21-7 to begin the third quarter.

Norwin’s Dom Barca returned the favor with a matching 74-yard kick return to the Canon-McMillan 13 on the ensuing kickoff. But a run for no gain, illegal shift penalty and a run for negative yardage left the Knights with a fourth-and-goal from the 26. Fleming seemingly had a momentum-shifting score thanks to his right arm, but Connor Chrisman dropped a sure touchdown, giving the ball back the Big Macs.

Logan North short-circuited the next Knights possession when he intercepted a Fleming pass on the Big Macs’ 20, keeping the Canon-McMillan lead at 14 points midway through the third quarter.

The next Norwin possession saw yet another Canon-McMillan interception. This one was returned 42 yards for a score by Kent McMahon, pushing the Big Macs’ lead to 28-7 with 1:04 left in the third

Norwin’s last-gasp attempt to get back in the game ended with 6:30 remaining in the contest when Fleming’s fourth-and-12 pass fell incomplete, giving Canon-McMillan the ball back on the Norwin 41.

Canon-McMillan plunged the dagger when Angott powered in from the one with three-plus minutes remaining, pushing the Big Macs’ lead to the eventual final score of 35-7.

The Big Macs’ quest for a spot in the postseason got off to a less than great start. Quarterback Lamont Lyons was stripped of the ball by Norwin linebacker Tanner Babeo. Tanner Krevokuch scooped up the loose ball and sprinted 23 yards to the end zone. Ty Bilinsky’s extra-point attempt was true, giving the Knights a 7-0 lead three-and-a-half minutes into the contest.

Canon-McMillan did not get out of the starting blocks until McMahon ignited the Big Macs’ pilot light when he intercepted a Fleming pass near midfield. Angott culminated a 51-yard drive with a five-yard scoring run. Anthony Finney knocked home the extra-point, tying the game at 7-7 late in the first quarter.

The Big Macs simply rode their ground game to take the lead on their next possession. Moving 64 yards, via pounding runs by Angott, Finney and Isaiah Chandler, Canon-McMillan found the end zone again thanks to a one-yard Lyons sneak. Finney extended the lead to 14-7 with his second extra-point.

Norwin looked to draw closer at the end of the half, but Joe Castle’s 44-yard field goal fell short; leaving the Big Macs halftime lead at 14-7.

“We had a season of ups and downs, our league’s tough,” Evans noted. “We did what we had to do to get a win but it’s tough when you have to rely on someone else’s help to get in.”