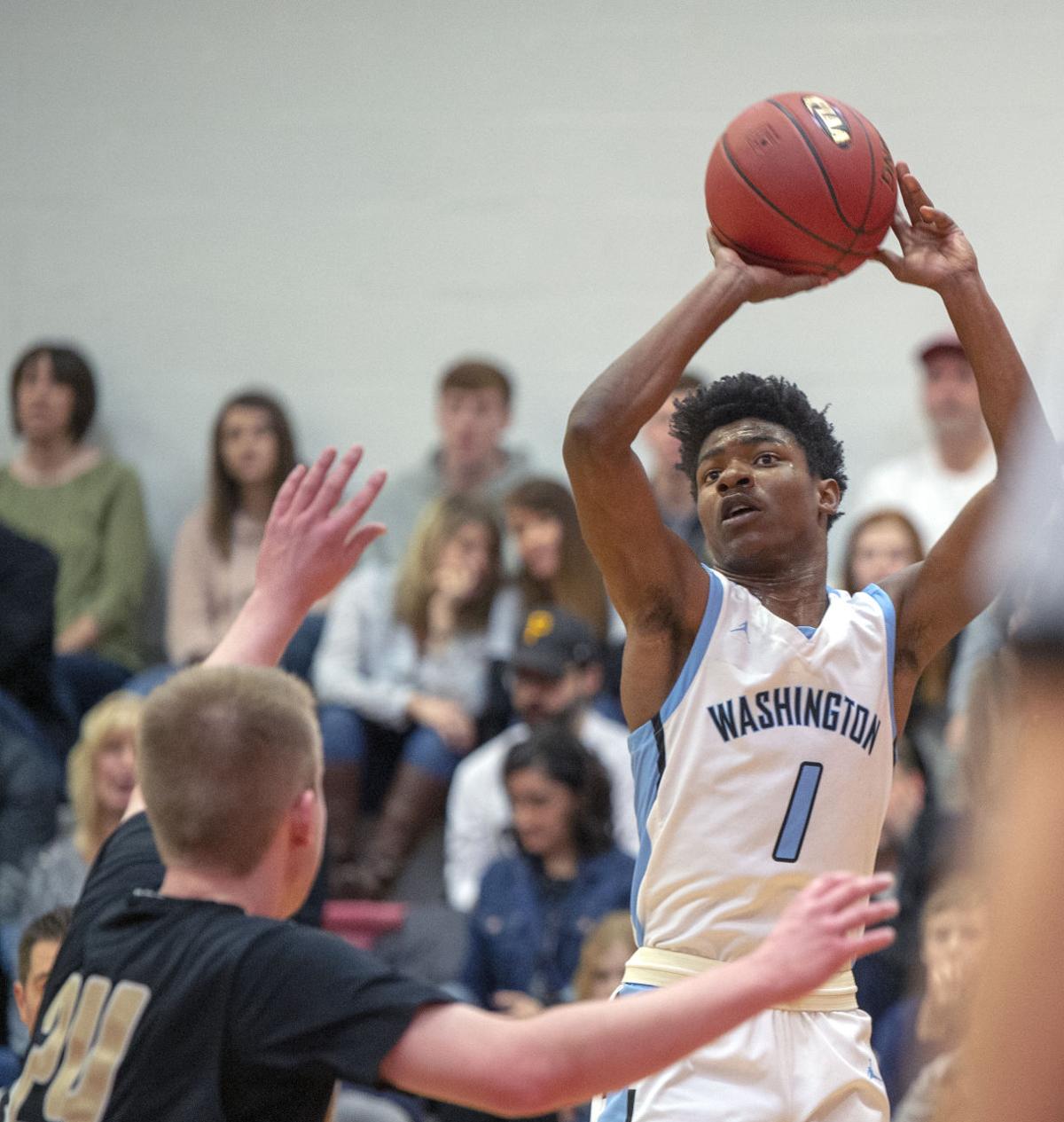 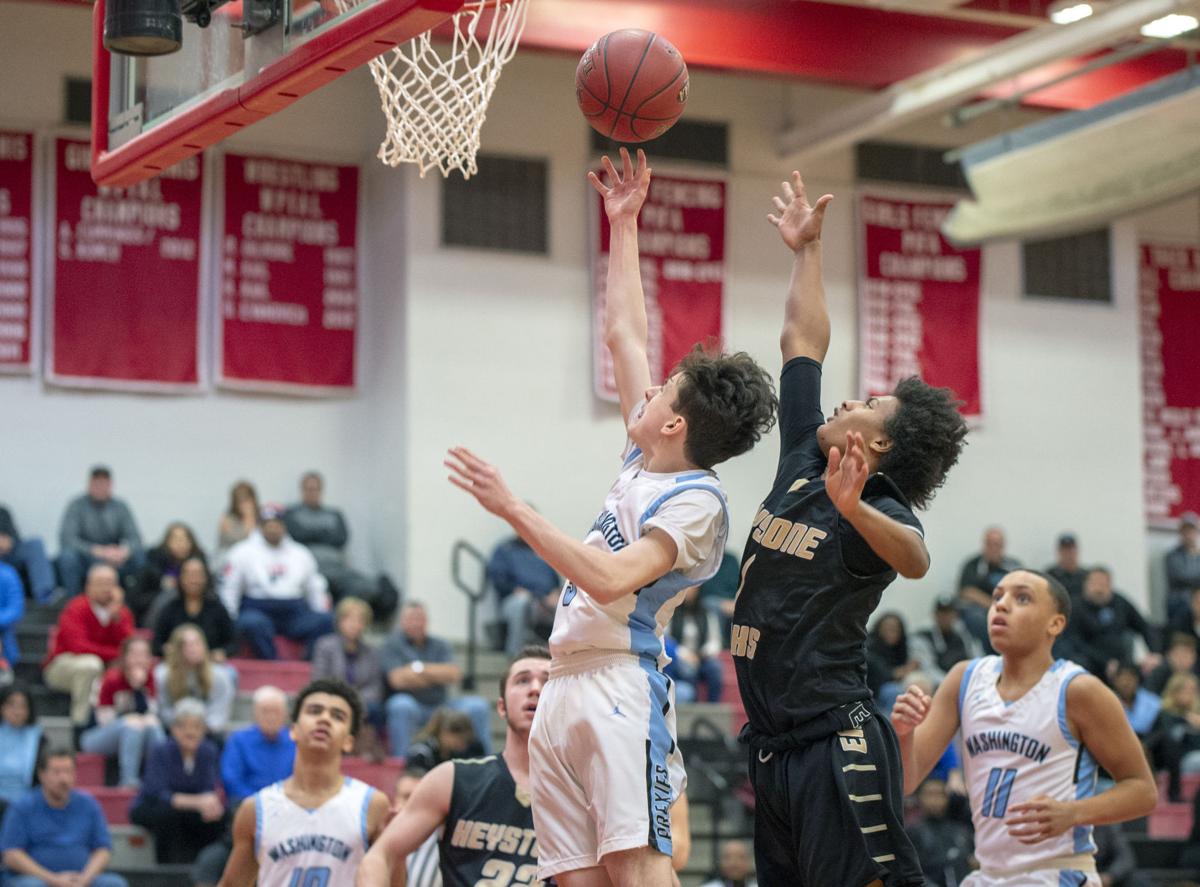 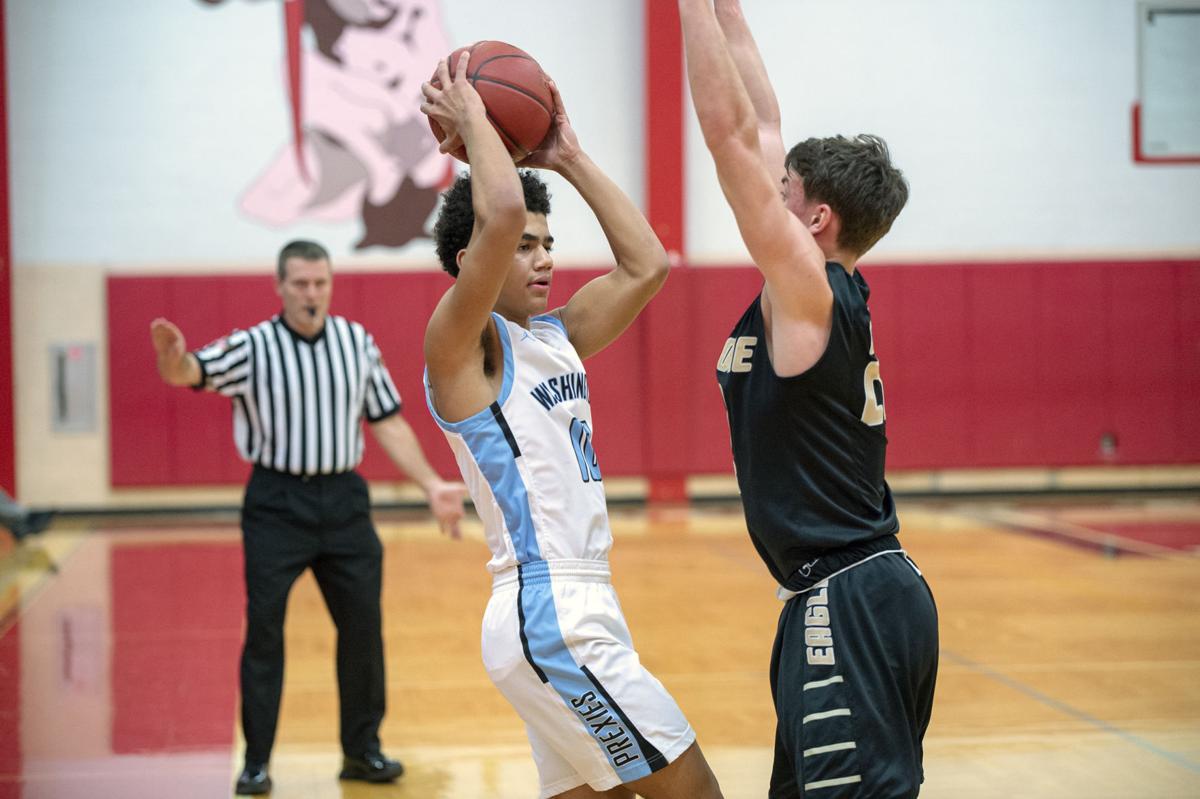 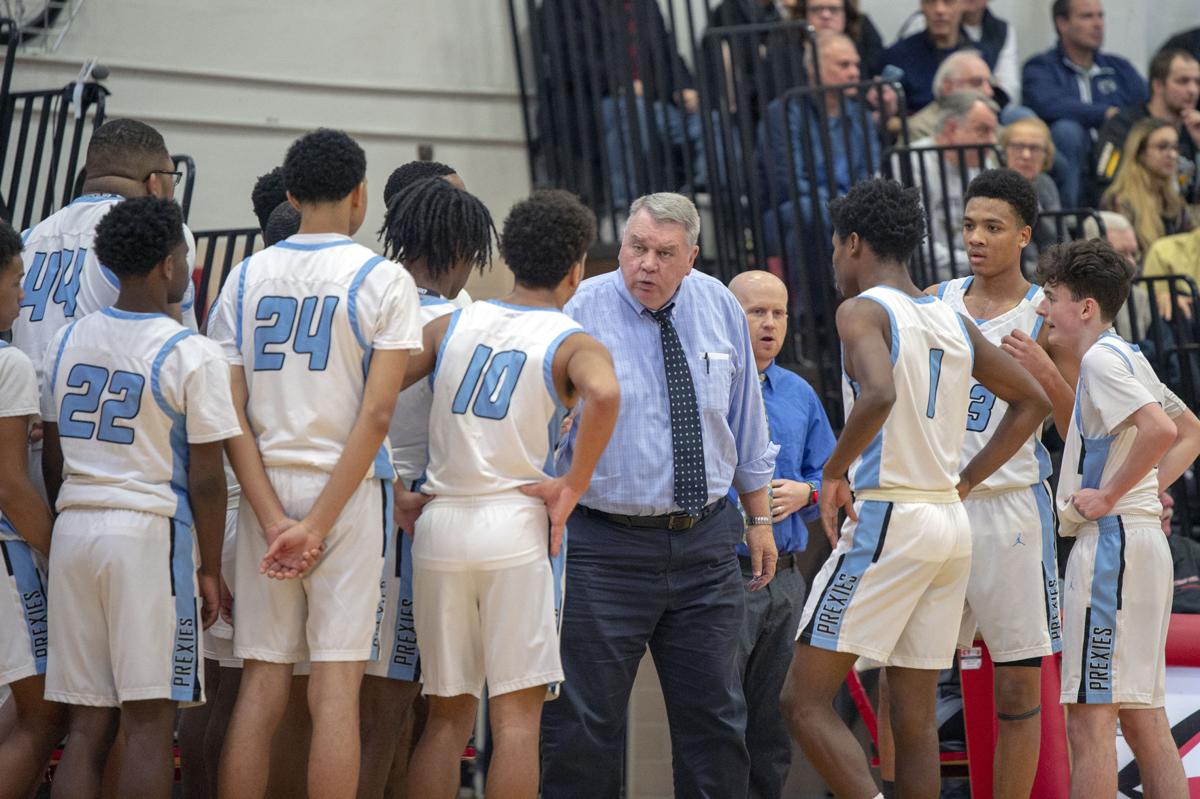 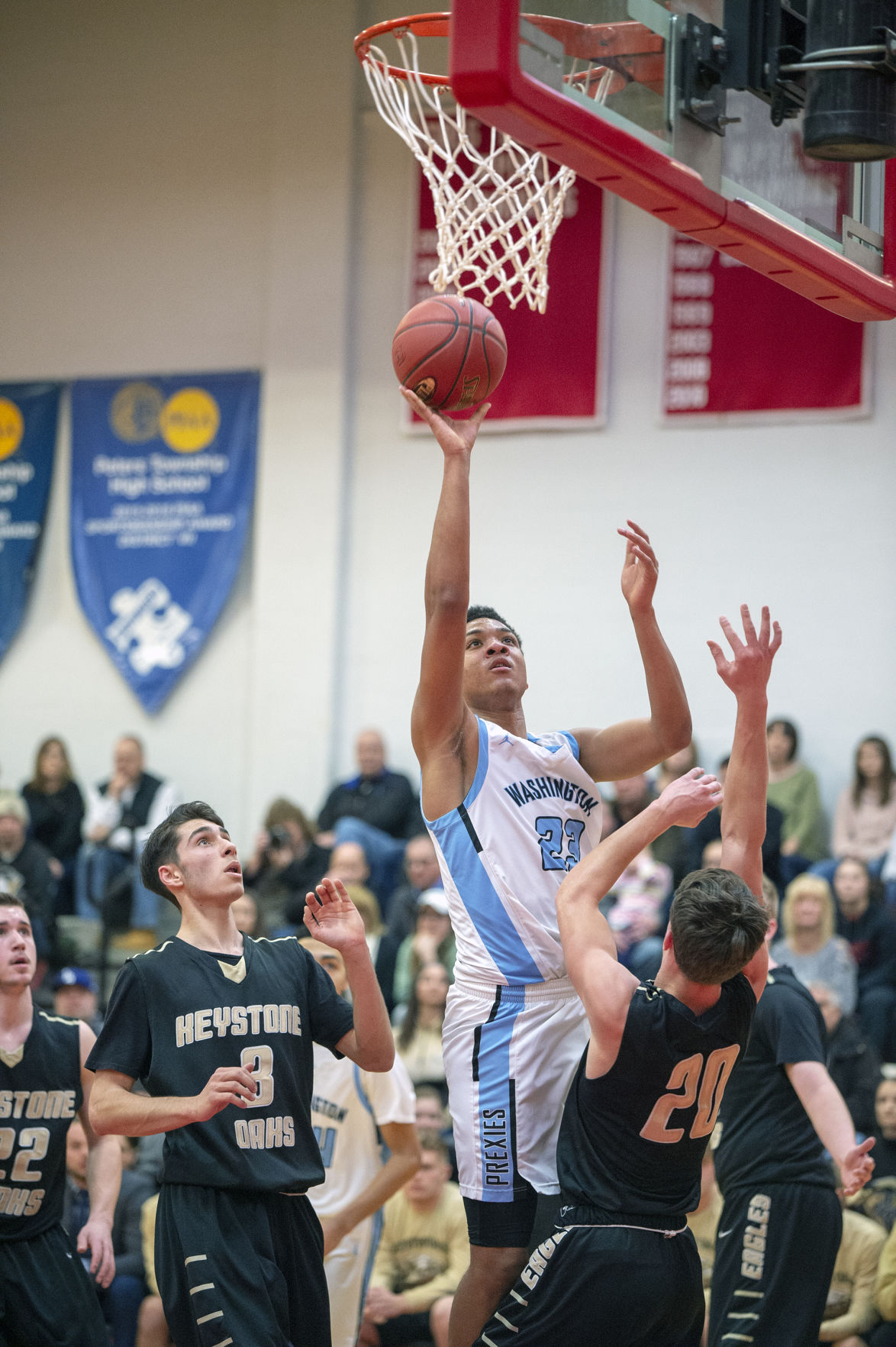 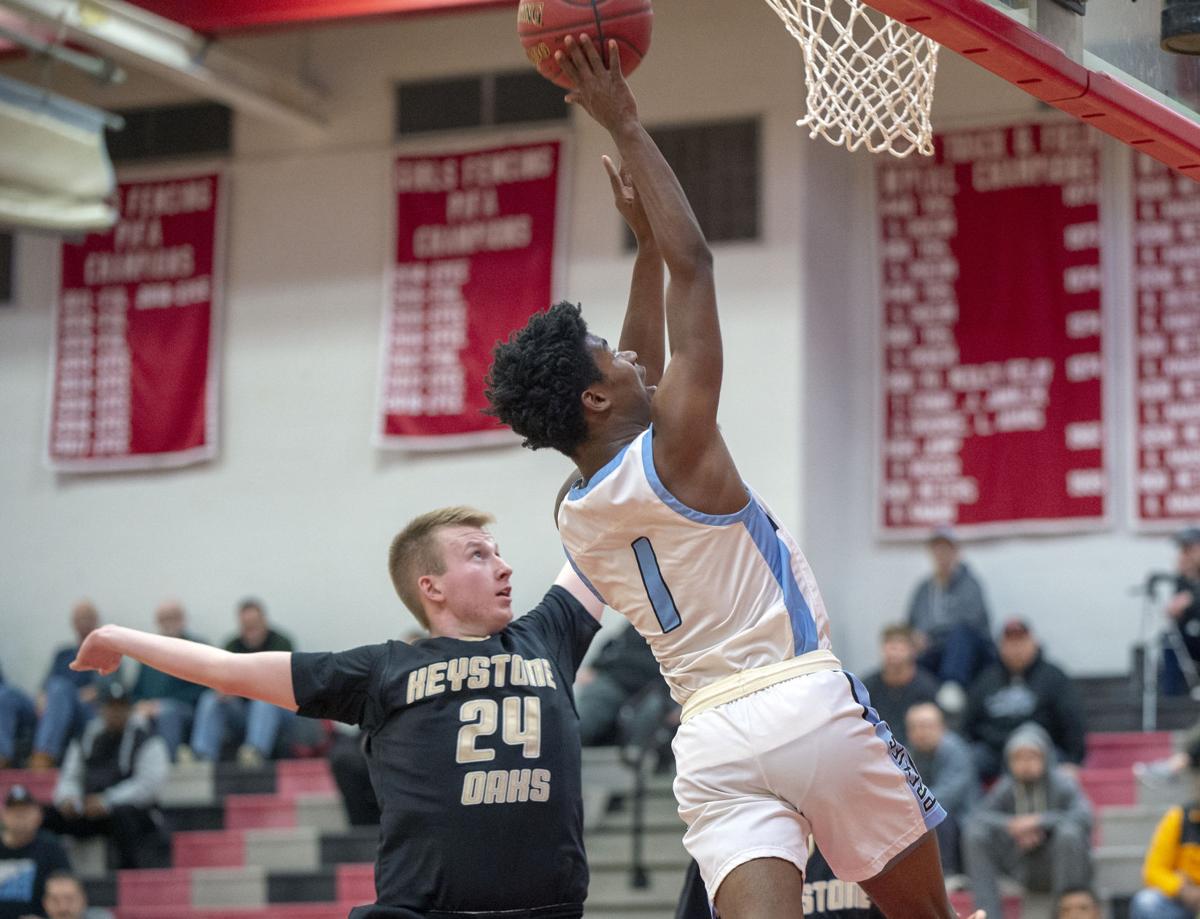 McMURRAY – The Washington High School boys basketball team is like a box of chocolates, you never know what you’re gonna get.

On the heels of Valentine’s Day, the Prexies delivered treats to longtime coach Ron Faust that will always get approval – solid defense, a balanced offense and nonstop hustle.

All those added up to a sweet start in Washington’s 63rd WPIAL playoff appearance. Building a lead in the first half, the fifth-seeded Prexies held off frantic comeback attempts from No. 12 Keystone Oaks in a 56-46 victory in a WPIAL Class 3A first-round game Saturday afternoon at Peters Township High School.

“First-round games are extremely difficult and we got a taste of it,” Faust said. “We kept plugging.”

The Prexies advance to play fourth-seeded Seton LaSalle (18-4) in the quarterfinals Thursday night at a site and time to be determined. The Rebels hammered Southmoreland, 54-34, in a first-round game Saturday.

Keystone Oaks (12-11) wasn’t going to allow Wash High to sail into the second round easily, despite falling behind by 16 points in the opening minutes of the third quarter. The Golden Eagles trimmed the deficit to single digits twice in the third quarter and three more times in the fourth, including after baseline three-pointer from CJ Morrow with 3:18 remaining in regulation that narrowed the gap to 44-38.

That would be the closest the Golden Eagles would get.

Wash High survived a few disastrous turnovers, KO’s full-court press and went 7-for-12 from the free-throw line in the final eight minutes to never let it become a one-possession game.

“Certainly after what we did there in some circumstances we aren’t going to win the junior high quiz of basketball,” Faust joked. “We made some decisions that weren’t very good.”

Keeping Washington (14-8) out of trouble was junior guard Zahmere Robinson, who scored seven of his team-high 15 points in the fourth quarter, going 5-for-6 from the foul line. Five players from Wash High scored at least eight points. Dan Ethridge joined Robinson in double figures with 11 points with 11 rebounds. Ian Bredniak scored nine points, and Caleb Jackson and Tayshawn Levy each had eight.

“We know going into every game we aren’t going to score 70 or 80 a night,” Robinson said. “At the beginning of the year, Dan and I were doing most of the scoring. As we have grown other guys have developed their own roles and have helped out with the scoring. We rely on our defense to contribute to our offense. That’s how we win games.”

The Prexies built their lead by intercepting cross-court passes, methodically running their half-court offense to drain the clock and being sparked by hustle plays, including one where Jackson reached out with his left hand to knock a ball back into play while going face-first into the Prexies’ bench.

“When you see that effort it really instills good things in your team,” Faust said. “There were some outstanding things, some real positives for us that are things you just have to do.”

Keystone Oaks trailed 28-19 at halftime, getting scoring from Frank Stumpo and Ben Kvederis. Stumpo had the first 11 points for the Golden Eagles and nobody outside of the duo scored until 3:08 left in the second quarter when Morrow, who scored a game-high 20 points, made a pair of free throws.

“We made some adjustments at halftime to get some (offensive) movement against their zone,” Keystone Oaks coach Phil McGivney said. “From that point on we started to be a little more patient and make the extra pass. We turned it up in the fourth quarter and forced (Washington) to do things they didn’t have to do all game, making them uncomfortable. We just didn’t convert all those turnovers into points, which left us a little short.”

It is the seventh win in the last eight games for the Prexies.

“We will go one at a time – keep playing, keep hustling,” Faust said. “We knew (Keystone Oaks) was going to come out and be difficult to fight through. You can forget those seedings because you can go stale in a hurry. If you do it for a couple minutes the game can get out of control. We were able to pull it out.”