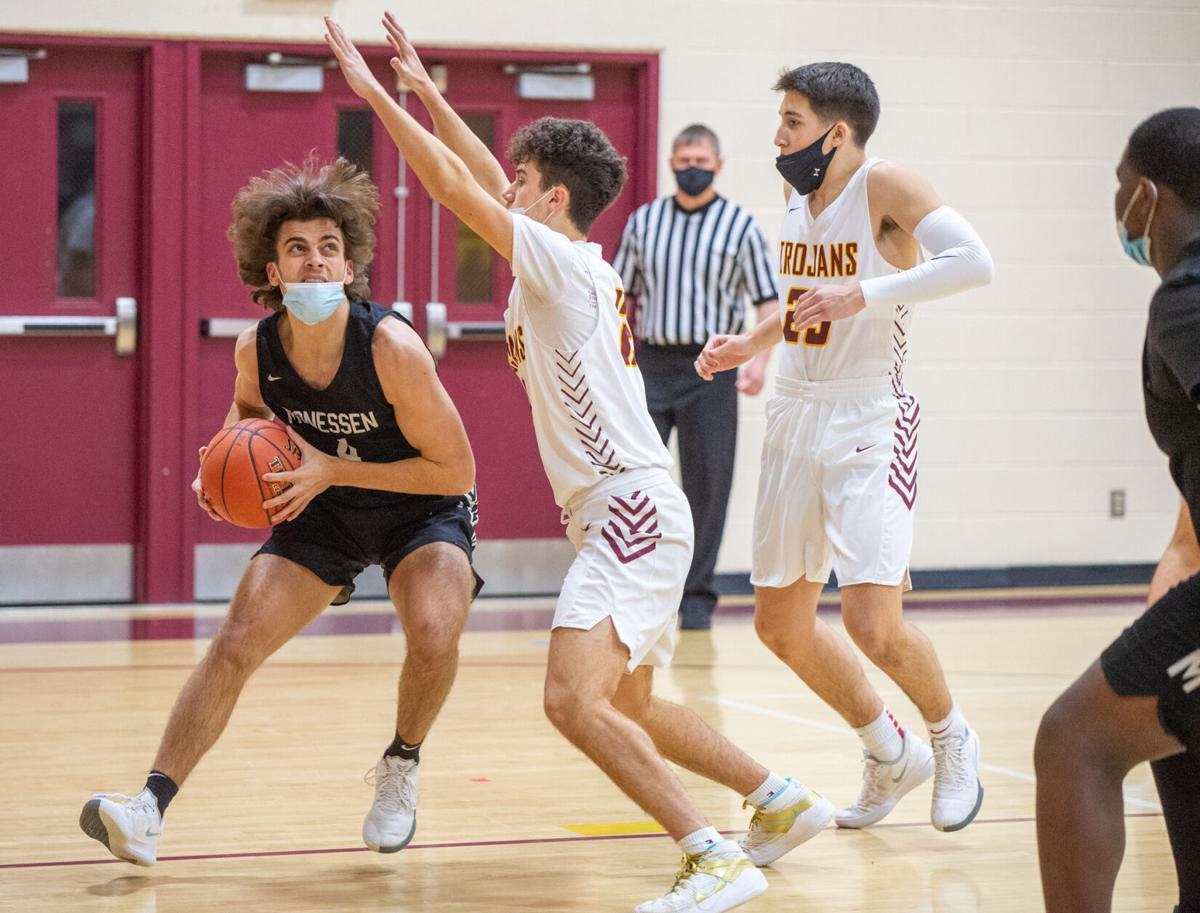 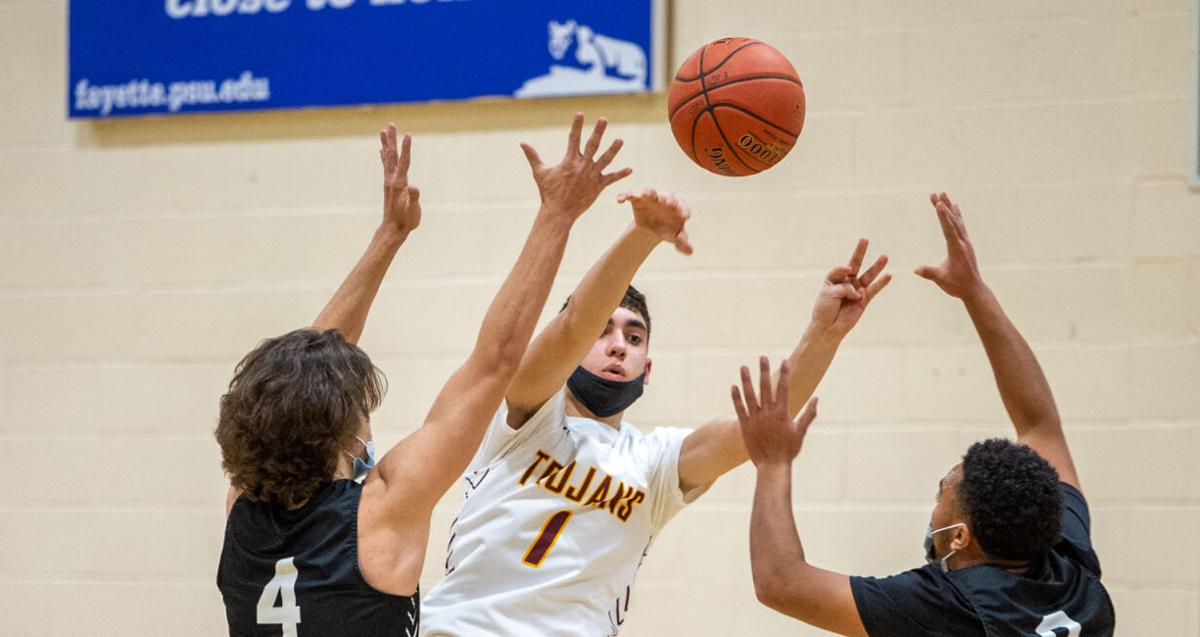 California’s Hunter Assad leaps and makes a pass through the defense of Monessen’s Charles Mrlack (4) and James Thomas during a game in early February. 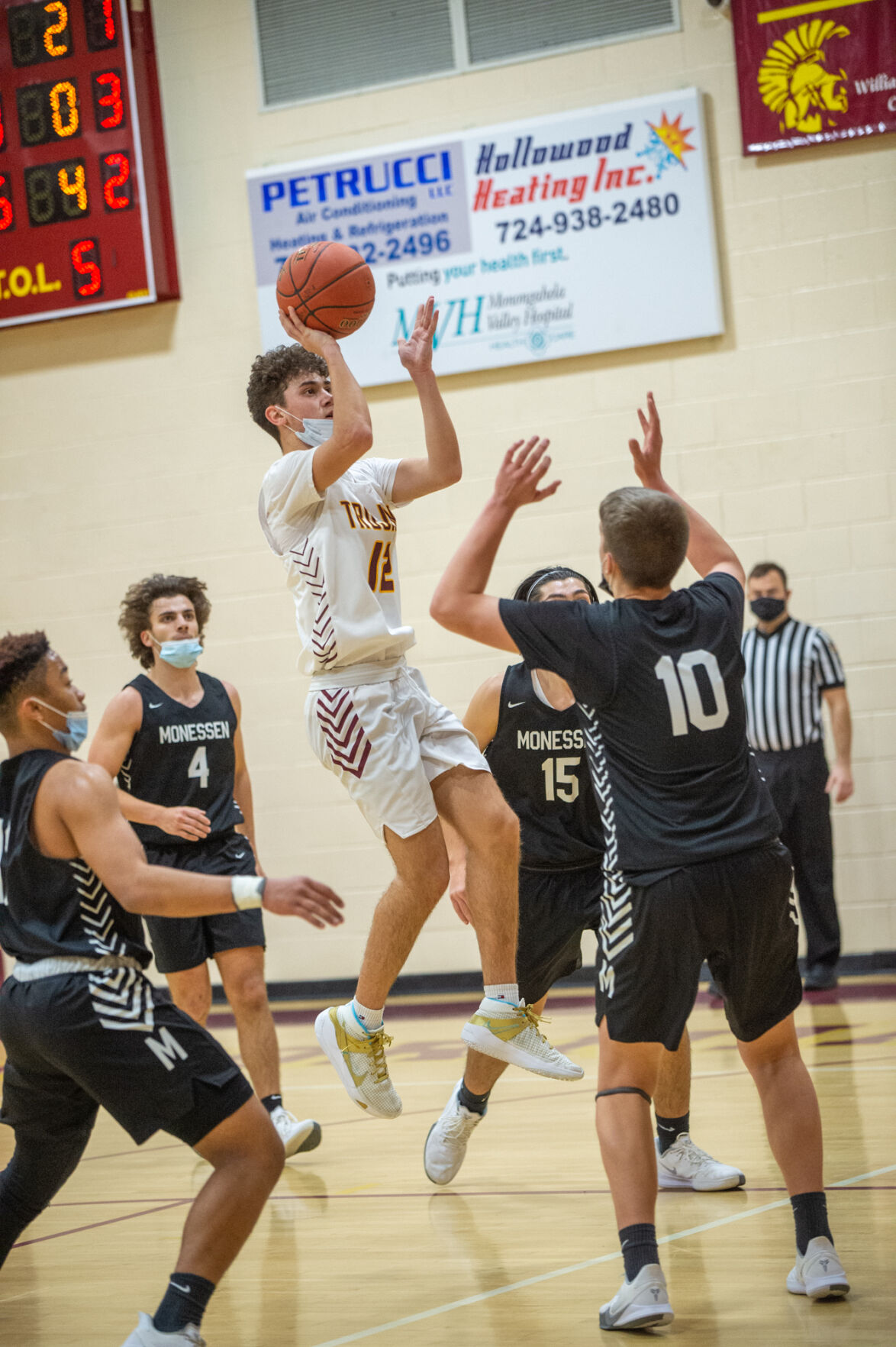 California’s Nathan O’Savage is surrounded by Monessen players but takes a shot from the lane over Kody Kuhns.

California’s Hunter Assad leaps and makes a pass through the defense of Monessen’s Charles Mrlack (4) and James Thomas during a game in early February.

California’s Nathan O’Savage is surrounded by Monessen players but takes a shot from the lane over Kody Kuhns.

COAL CENTER – Monessen played its most complete game of the season Tuesday as it went on the road to knock off Class 2A Section 4 leader California, 61-55.

“I feel such a strong way towards this group, I am so happy for them to get to experience this and beat the top team in the section,” said third-year Monessen coach Dan Bosnic. “This win is up there, but with that said we have a lot of section games left and have to take care of business.”

“We did not control the ball tonight and it showed,” he said of his team which had 24 turnovers. “I think that Monessen came out and wanted it more, so I give them credit.”

Monessen (5-2, 7-5) made seven of eight free throw attempts down the stretch as Jaisean Blackman hit all four of his attempts and Kody Kuhns made three of four.

“That is how you want to finish the game and the guys showed character,” Bosnic said. “Any time you are in a close game, you have to finish it on the line and the guys did that tonight.”

The free-throw attempt discrepancy was based off of the aggressiveness of Monessen, which included the Greyhounds winning most 50-50 balls throughout the game.

“We were effective with our trap after making adjustments from when we played them last time and it bothered them,” Bosnic said. “And once we took a big lead, they had to come out and cover us, but we were able to get around them which got them into foul trouble.”

Three Trojans fouled out while one Greyhound exhausted his five fouls.

“Against Frazier on Friday, we couldn’t miss for a stretch, and tonight we couldn’t hit anything in the first,” Balla said. “It was almost comical that we couldn’t get anything to fall after how we shot Friday.”

The Greyhounds led by as many as 15 early in the third quarter at 36-21, but it was Monessen’s turn to go cold as the Trojans went on a 11-1 run to close the third and to trim Monessen’s lead to 37-32 heading into the fourth.

California tied Monessen three times in the fourth but could never take the lead.

With Monessen up 48-46 with 2:16 to play, California’s bench was called for a technical foul when a player on the bench complained loudly to an official.

Kuhns hit both free throws to start a 6-0 run, and while California fought to the end Monessen sealed the game at the line.

The Trojans did not practice since their big win over Frazier but Balla would not use that as an excuse.

“While I know that didn’t help us, we will not make excuses,” he said. “Monessen deserved to win this game and did.

“The guys will have to have short amnesia as it is best as we have a tough matchup on the road Friday.”

“Our bench is starting to show that it can come in and help us,” he said. “They are making a big difference, gaining experience and making us a better team.”