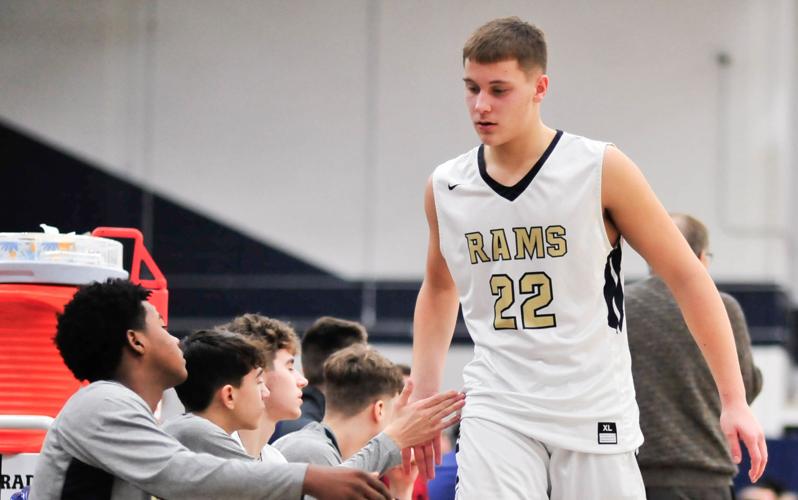 Ringgold’s Jordan Mayer gets a hand from a teammate after fouling out late in the game Tuesday against Uniontown. 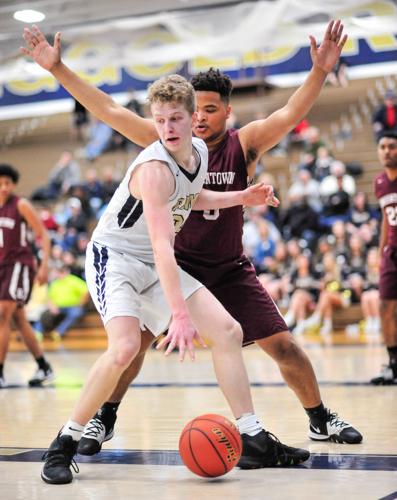 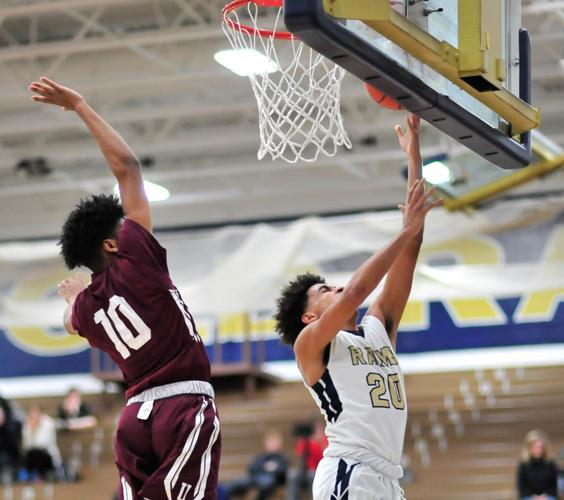 In what turned out to be a questionable call, Ringgold’s Demetrius Butler has his layup blocked off the glass by Uniotown’s Billy DeShields early in the fourth quarter Tuesday night at Ringgold.

Ringgold’s Jordan Mayer gets a hand from a teammate after fouling out late in the game Tuesday against Uniontown.

In what turned out to be a questionable call, Ringgold’s Demetrius Butler has his layup blocked off the glass by Uniotown’s Billy DeShields early in the fourth quarter Tuesday night at Ringgold.

MONONGAHELA – In a game full of scoring runs, it was Uniontown who made the last one to pull away late and pick up a 71-62 win over Ringgold in a showdown for first place in Class 4A Section 3 Tuesday night.

“You have to win on the road and I am glad we don’t have to come back here because it is never an easy place to play,” said Uniontown coach Rob Kezmarsky. “We have been very successful here the last few years, but Coach Pergola and his staff did an excellent job and had their team prepared. We are happy to get out of here with a win.”

Ringgold coach Phil Pergola was happy with how his team played, but he also knows that the Rams didn’t capitalize on some opportunities that could have changed the outcome.

“It was a good game, and while we played well, we made too many mental mistakes,” he said. “We didn’t shoot well from the free-throw line and when you only make seven out of 17 attempts, you won’t win close games.

“A few of those were front ends of one-and-ones late but give Uniontown credit as they are the first-place team for a reason.”

Ringgold opened the second half with a 16-4 run to build a 45-39 lead halfway through the third quarter, but Uniontown closed on an 11-7 spurt to trim Ringgold’s lead to 52-50 going into the fourth.

Ringgold was dealt a blow 14 seconds into the fourth when 6-3 forward Jordan Mayer fouled out and the Rams, who played without injured 6-6 forward Ben Lawrence, had to go with a smaller lineup.

The teams fought back and forth throughout the fourth and Uniontown’s Bryant Grady hit a shot to give the Red Raiders the lead for good at 59-58 with 5:19 to play.

Two possessions later, Uniontown’s Billy DeShields found Jahmere Richardson on a fast break alley-oop to go to give the visitors a 63-60 lead.

Uniontown made eight of 12 free throws in the last two minutes to seal the win and to take control of the section.

“The difference was that we rebounded like we are capable of in the fourth,” Kezmarsky said. “But I give credit to (Luke Wyvratt) and (Mayer) as they played well inside.”

Richardson finished with a game-high 25 points for Uniontown while DeShields added 21 and Isaiah Melvin had 11.

Luke Wyvratt controlled the inside at times and finished with a double-double for Ringgold with 24 points and 14 rebounds. Chris Peccon scored 18 points and Demetrius Butler tallied 11.

“I have so much respect for Chris and have known his family for a long time,” Kezmarsky said. “Moving forward though, we will stay focused and keep improving.”

Ringgold has a quick turnaround as it heads to Thomas Jefferson today for a non-section game before going to Belle Vernon for a key section game Friday.