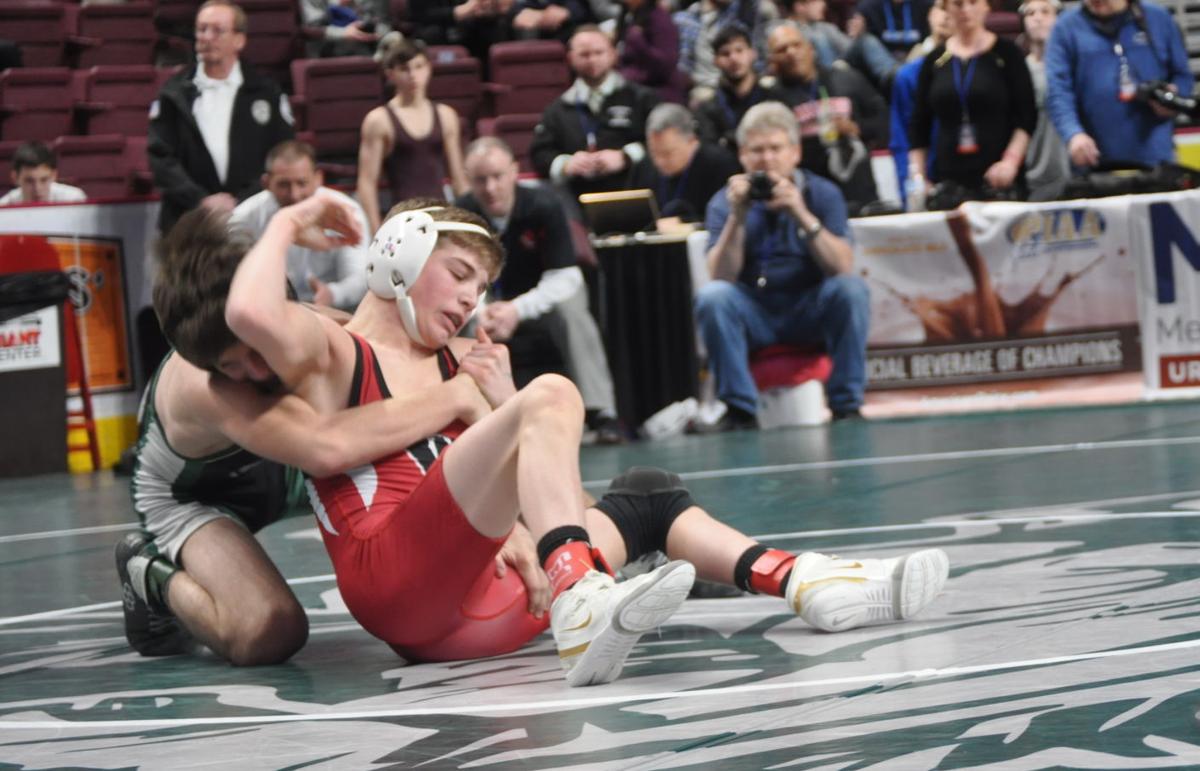 Waynesburg’s Mac Church, front, tries to get out of a hold from Matt Repos of Central Dauphin in the 106-pound quarterfinal bout in the PIAA Class AAA Wrestling Championships at the Giant Center in Hershey. 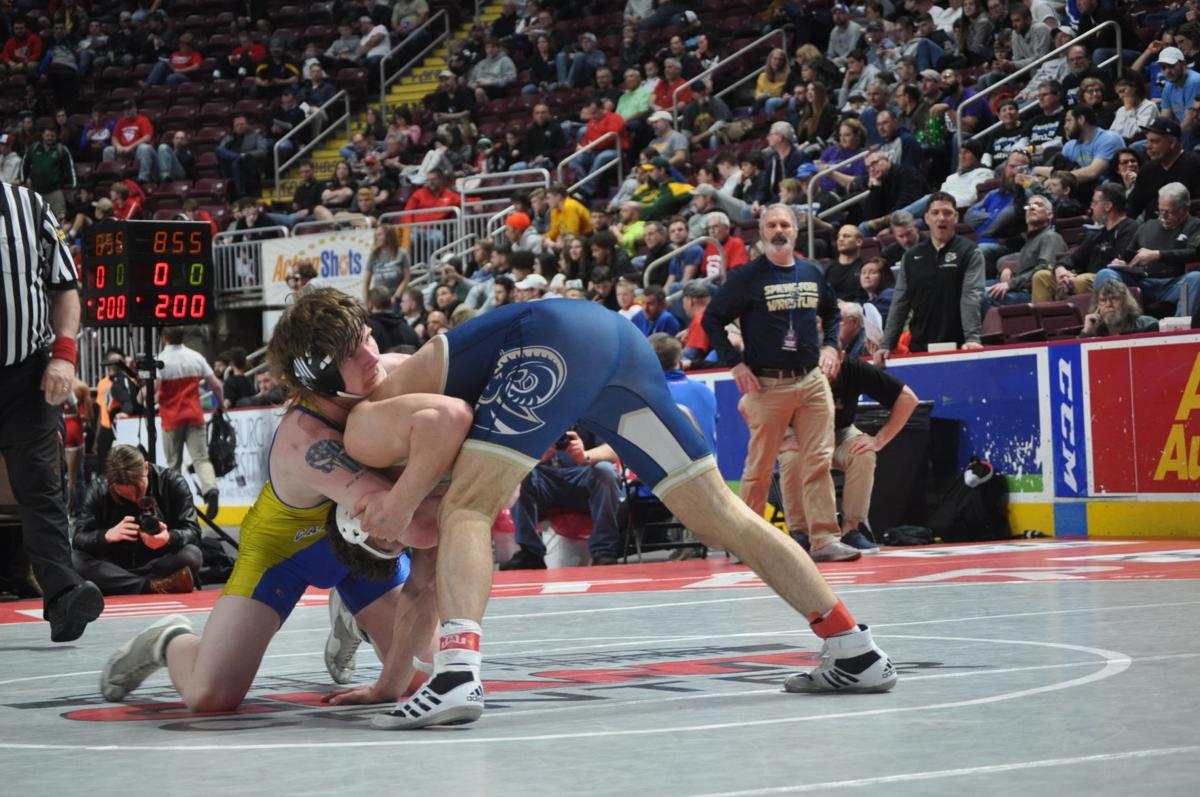 Canon-McMillan’s Gerrit Nijenhuis, left, works on Joey Milano of Spring Ford during the 182-pound quarterfinal in the PIAA Class AAA Wrestling Championships at the Giant Center in Hershey.

Waynesburg’s Mac Church, front, tries to get out of a hold from Matt Repos of Central Dauphin in the 106-pound quarterfinal bout in the PIAA Class AAA Wrestling Championships at the Giant Center in Hershey.

Canon-McMillan’s Gerrit Nijenhuis, left, works on Joey Milano of Spring Ford during the 182-pound quarterfinal in the PIAA Class AAA Wrestling Championships at the Giant Center in Hershey.

HERSHEY – Under normal circumstances, Waynesburg High School advancing three of its five wrestlers to the semifinals of the state tournament would be a reason to celebrate.

Except one of them being left behind in such a controversial manner that it tended to overshadow the rest.

Mac Church, the extremely talented 106-pound freshman, saw his chances for winning four state titles dissolve in a controversial match against Matt Repos of Central Dauphin High School. Repos came away with the win and ignited a shower of boos in the crowd at the Giant Center, after Church was charged with his third caution to give Repos the point he needed to win in ultimate tiebreaker.

When watching the video replay of the match, it appeared to show Repos’ left leg twitch and Church reacting to the movement by reaching for the leg. The referee blew the whistle with 22 seconds left in the ultimate tiebreaker and awarded the winning point. Church jumped up and pleaded his case to the referee but it was in vain.

“He backed into me,“ Church repeatedly yelled at the referee.

Church then picked up his gear and stalked off the mat as the boos got louder from the crowd. The coaches from Waynesburg tried to argue Church’s case, but it didn’t change the outcome.

“I feel really bad for him,” said Waynesburg head coach Joe Throckmorton. “He wanted to be a four-time champion but obviously that’s not going to happen. He’s mentally tough and he will come back.“

Church did, winning a consolation match in the session after the quarterfinals. He’ll continue wrestling today.

Church seemed more nervous on the mat than usual. He got two cautions, well deserved, for moving on the restarts. The first one came at the start of the third with Church trailing, 1-0. The second one came during a neutral restart in the first overtime.

“It’s so hard to tell when you’re looking at it,” said Throckmorton. “I looked at the video and think it shows their guy moved first. It was a very close.”

Throckmorton said that you “can’t leave any 50-50 match (to the referee). You have to take it out of their hands.

“The bottom line is we don’t have excuses,” said Throckmorton. “You have six minutes to determine that match.”

“Matt’s upset because he didn’t want to win this way,” said Sweigard. “There was still 22 seconds left so I felt confident he would’ve gotten out. He hasn’t been held down at all this year.”

Meanwhile, Church watched as his teammates Rocco Welsh, Wyatt Henson and Luca Augustine move into today’s semifinals, which begin at 9 a.m. The finals are set for 7 p.m.

Welsh won by decision over Jude Swisher of Notre Dame Green Pond, 5-2, and will take on Luke Lucerne of Council Rock North in the 126-pound semis.

Henson then won by major decision over Chandler Ho of Dubois, 12-4, and draws Evan Gleason of Bethlehem Catholic this morning in the 138-pound semis.

Cole Weightman of Belle Vernon pinned Steve Schott of Nazareth in 3:49. Dorian Crosby of Erie Cathedral Prep is next in the 220-pound semifinals.

Joining the Waynesburg wrestlers in the semifinals is Gerrit Nijenhuis, who is looking for his second straight PIAA title. The senior from Canon-McMillan had little trouble stopping Joey Milano of Spring Ford, 7-1. Peters Township’s Donovan McMillon also advanced at 182 with a 4-2 decision over Emmaus’ Caden Wright.

“I just want to go out there and wrestle the sam as I always do,” Nijenhuis said. “There is no reason to change anything now.”

Nijenhuis will wrestle Nick Baker of Penns Manor in today’s 182-pound semifinals. Nijenhuis is two wins away from a gold medal and from becoming the winningest wrestler in WPIAL history at 181.

“I’m not even thinking about that,” he said.