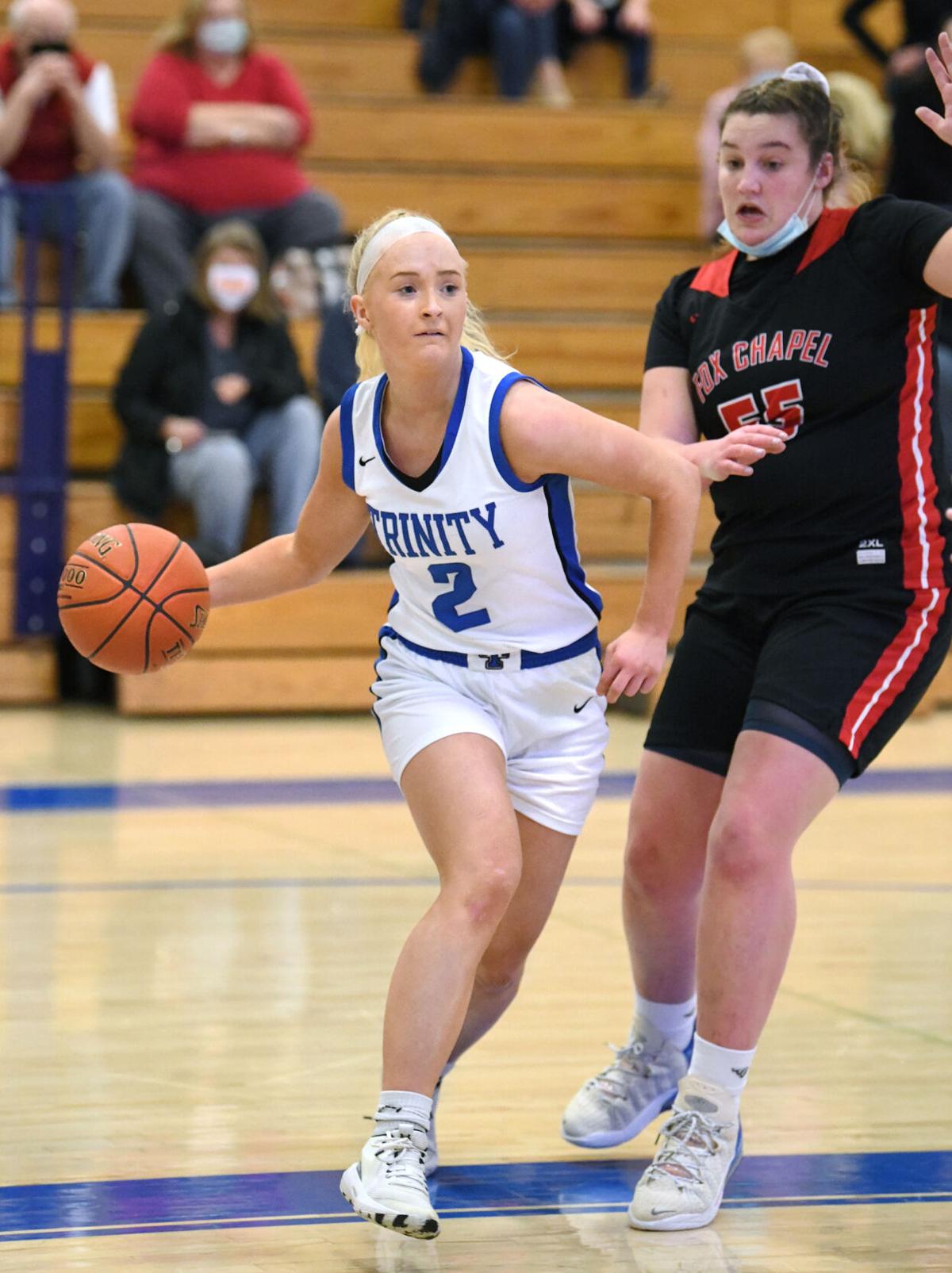 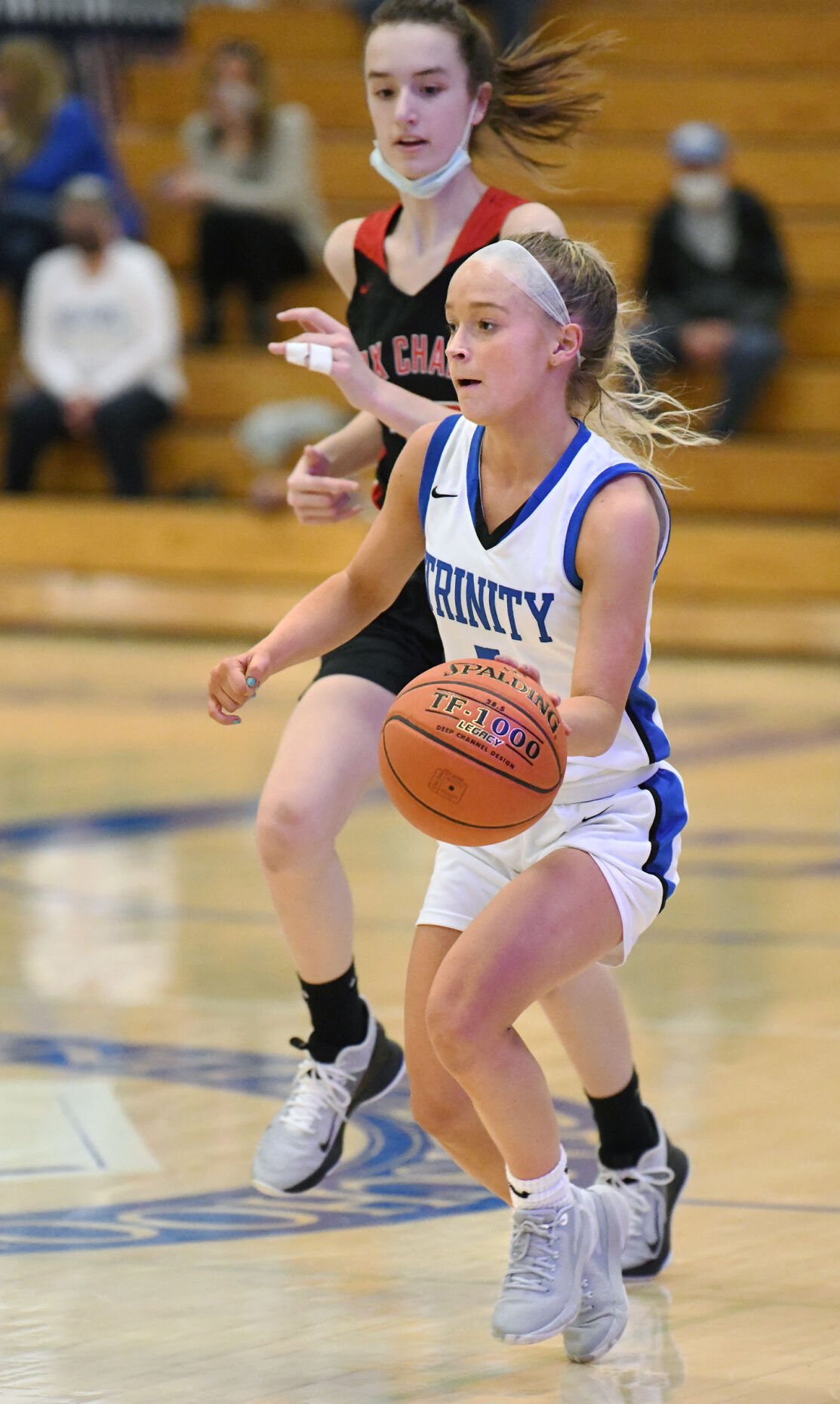 Emily and Kaylin Venick entered the world together.

The twins have spent much of their 18 years playing sports together – softball, volleyball and most notably, basketball. The sisters helped lead the Trinity High School girls basketball team to consecutive WPIAL Class 5A title game appearances in their junior and senior seasons.

Someday, they will no longer play on the same team or live under the same roof, but that day won’t come when the twins graduate from Trinity in June. Emily and Kaylin plan to further their educations and basketball careers at Slippery Rock University.

That the twins are going to the same college is no surprise, but the fact that they won’t be going to Waynesburg University might have been an eye-opener for some. Their father, Scott, has been the defensive coordinator of the Yellow Jackets’ football team for 15 seasons, and his two oldest daughters grew up around the campus.

“They would come to camp with me and spend 10 hours a day here,” Scott Venick said. “They’d watch 10 minutes of practice, then the next thing you’d know, they’d be running the steps for 25 minutes.”

The twins decided to go somewhere that’s a little more foreign but not in an entirely different world from where they have grown up.

“It’s not too close to home, but at the same time, it’s not five hours away where I’ll never be able to come home,” Kaylin said. “So I think the distance was very good, but I think it’s also far enough away because being in our backyard was something that wasn’t very appealing to us.”

One doesn’t need to know the last name to tell that the two are related, but Kaylin and Emily aren’t identical twins. Kaylin is a few inches taller. Emily is a point guard, and Kaylin a shooting guard. The sisters also have different personality traits.

“I’m the boss. That’s the bottom line,” Emily said with a laugh.

Yes, Emily is more assertive, and she’s technically the elder, born 48 minutes before her twin. As the point guard, Emily was Trinity’s emotional leader. On the floor, Emily possesses a visible, scorching ferocity. Kaylin, in her words, has “more of the chill.”

“Nothing bothers Kaylin,” Scott Venick said. “Emily gets bothered by some things. Kaylin is in her own world when it comes to that.”

Although they aren’t exact clones of each other, they are still twins, after all.

And they share a love of competition, whether it’s against another team or each other.

Back when they were in the seventh grade, the twins played a one-on-one game against each other in the rain that ended up lasting an hour and a half.

“Every time I would score, Emily would come back and score,” Kaylin said. “I think that us having each other to compete with, and also compete against, has been one of the best things for us.”

Indeed, the twins know how to compete, and at Trinity, they won far more often than they lost. Both feel that their experience in Hiller Hall has them ready for what’s ahead.

“I don’t think that there’s a better coaching staff that could prepare us for the next level,” Emily said. “Our coaching staff at Trinity, they’re unbelievable. Everything we do is run like a college would run it.”

That probably has a lot to do with the fact that Kathy McConnell-Miller, who took over the Hillers program when the twins were rising juniors, had previously led two Division I college programs – Tulsa and Colorado – and was an assistant at Pitt.

What stood out to McConnell-Miller as she got to know Emily and Kaylin was the amount of time they spent in the gym and their willingness to set specific objectives.

“A lot of kids think they want to be great, they might talk about it,” McConnell-Miller said. “But these two expressed, number one, their team goals and then their individual goals. It struck me as being very mature about the process that they were going through.”

The Venicks will have a new list of goals to check off in college. They will hope to get their degrees – Emily in early education with a likely emphasis on special education and Kaylin in business and marketing – while helping to turn around a program that hasn’t had a winning season since 2002. After college, both twins plan to become graduate assistants.

Scott Venick will have four more years to watch his two oldest daughters play basketball in college, while the youngest of his three children, Riley, will play for McConnell-Miller starting next year as a freshman.

“I can’t wait,” he said. “That’s what I live for right now, all three of my daughters. Getting to watch her and those two compete, that’s the highlight right now. That’s what it’s about to me.”

McConnell-Miller is confident that the next chapter and all subsequent chapters of Emily and Kaylin’s lives will be prosperous.