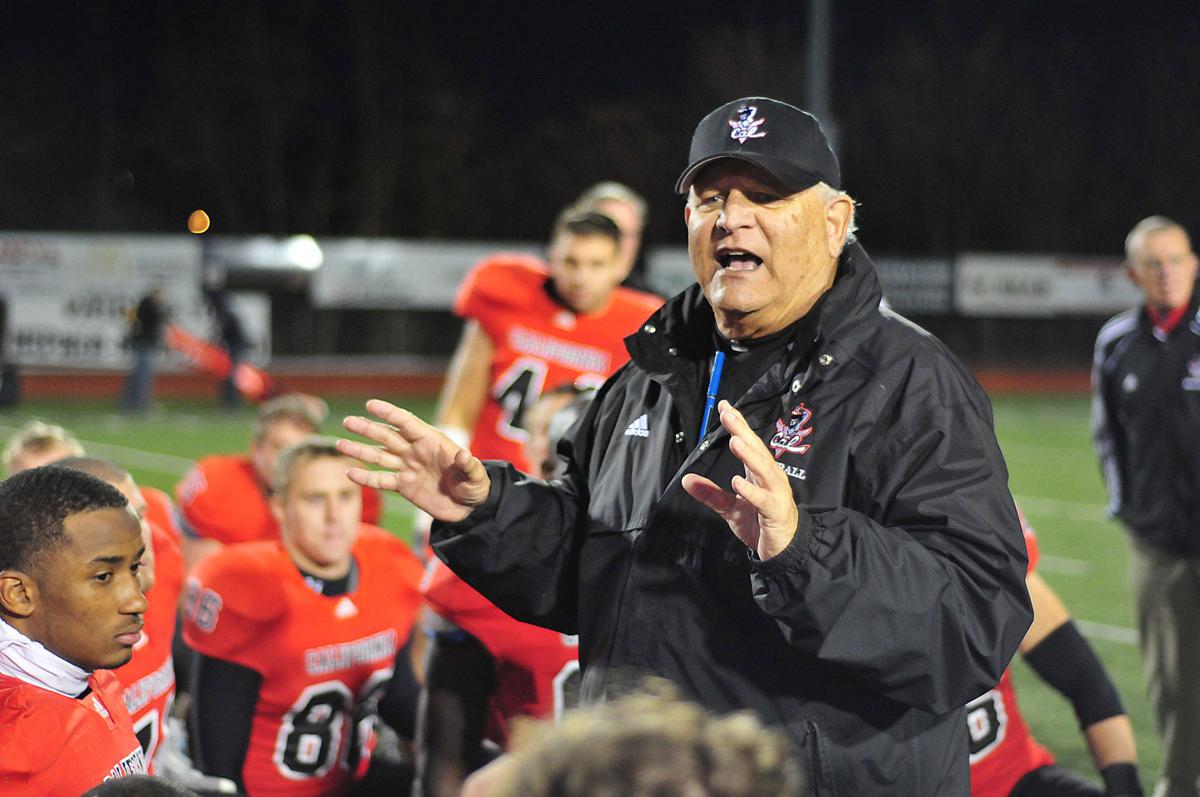 Former California University and Washington & Jefferson College coach John Luckhardt will be inducted into the College Football Hall of Fame in December. 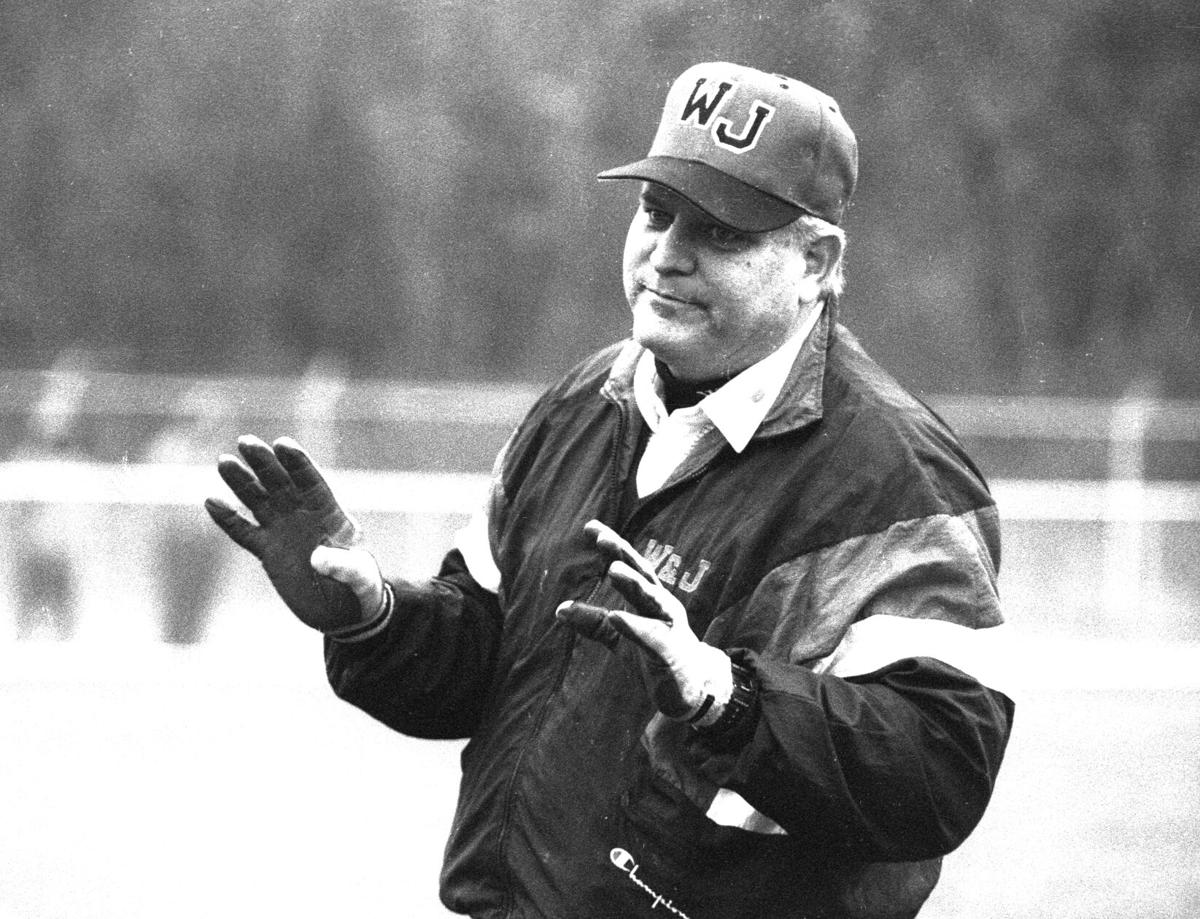 John Luckhardt coached Washington & Jefferson to a 137-37-2 record and two trips to the NCAA Division III championship game in 17 seasons.

Former California University and Washington & Jefferson College coach John Luckhardt will be inducted into the College Football Hall of Fame in December.

John Luckhardt coached Washington & Jefferson to a 137-37-2 record and two trips to the NCAA Division III championship game in 17 seasons.

John Luckhardt has a difficult decision when he arrives for the induction ceremonies for the College Football Hall of Fame in December.

Should he wear the football cap of Washington & Jefferson College, where he was head coach from 1982 to 1998 and compiled a 137-37-2 record that included two appearances in the NCAA Division III championship game?

Or should he wear the football cap of California University, where he coached for from 2002-2011, amassed an 88-33 record and made two appearances in the NCAA Division II semifinal game?

“I think I’ll wear both,” said Luckhardt in a telephone interview Monday afternoon shortly after his name and those of 17 other inductees were revealed by ESPN.

The inductees will be feted at the 64th National Football Foundation Annual Awards Dinner Dec. 6 at location to be determined.

Joining Luckhardt at the ceremony will be such former stars as Penn State linebacker LaVar Arrington (1997-99), Georgia defensive back Champ Bailey (1996-98) and Stanford quarterback Andrew Luck (2009-11).

Luckhardt didn’t find out about the honor until last Wednesday, when he found a box delivered to his porch. Because it was sent by Amazon, he thought it was for his wife, Barbara.

“We get a lot of packages and I thought my wife got another package so I handed it to her,” Luckhardt recalled. “She looked at it and said, ‘Oh no. This is for you.’

“So I opened it up and there was a football inside engraved with Class of 2022. I thought someone was joking. One of my former coaches liked to play practical jokes. At the bottom of the box was a letter telling me I was inducted in the College Football Hall of Fame. That’s how I found out.”

Luckhardt spent a decade as head coach at Cal following an incredibly successful tenure at Washington & Jefferson. Over his 27 seasons as head coach, he posted a 225-70-2 overall record behind 11 seasons of double-digit victories. Luckhardt had a .761 winning percentage while leading the Presidents and Vulcans to a combined 16 appearances in the NCAA playoffs.

At one point, Luckardt was the winningest coach at the two schools.

“I’m trying to thank all the people who made that happen, let alone all the players,” Luckhardt said. “There was (former California University president) Angelo Armenti and (team physician) Tony Canterna. I thanked three or four others but I have to thank a few more coaches, John Banaszak. It was something I did not expect, to be candid with you.”

Under Luckhardt’s guidance, W&J won 13 Presidents’ Athletic Conference championships and made 11 appearances in the NCAA Division III playoffs, including two trips to the Amos Alonzo Stagg Bowl (1992 and 1994). In 1992, he was named the AFCA National Coach of the Year, and CNN named him the Division III Coach of the Year in 1994.

“He’s my mentor, like a father to all of us,” said Mike Conway, former California and W&J defensive coordinator under Luckhardt. “He cares about other people more than himself. I was lucky to run into and work for the best.”

“He’s been my mentor and defacto father since I attended W&J,” said Rich Riotto, the Presidents’ quarterback in the mid-1980s. “He’s the most important male role model in my life. I could not be happier for him. He created and developed men. He means so much to all of us.”

“This is just wonderful news,” former Presidents All-American defensive end Stephan Swentkowsy. “He created a culture in the program and built a true team, good feelings and a winning program. The other thing he did was to prepare us for life, to be successful professionals, be good fathers and help find us jobs. He did that for everyone.”

“This is a tremendous career accomplishment for Coach Luckhardt and we are excited for him and his family,” said Cal athletic director Dr. Karen Hjerpe. “The impact he had on our football program, and entire athletic department, cannot be understated. In addition to all the victories, Coach Luckhardt was a true developer of young men throughout his entire coaching career.”

Previously, the 76-year-old Luckhardt was inducted into the Pennsylvania Sprots Hall of Fame (2001), Washington & Jefferson Hall of Fame (2007) and Cal Athletic Hall of Fame (2020). He received the American Football Foundation Lifetime Achievement Award in 1998 and was chosen as part of The PSAC’S 150 Contributors in 2019.

“We are thrilled for Coach Luckhardt. He turned W&J football into an annual NCAA Division III power and helped create so many memorable moments and memories for Washington & Jefferson College students, alumni and fans,” said Scott McGuinness, Director of Athletics at W&J. “Coach Luckhardt’s entry into the College Football Hall of Fame cements his legacy of leadership, mentoring and excellence.”

Luckhardt becomes the fourth person with ties to W&J to enter the College Football Hall of Fame. Previous inductees with W&J ties were Wilbur “Pete” Henry (1951), John Heisman (1954) and Edgar Garbisch (1954). He is the first Cal player or coach to be inducted.

“I’m excited and I think this is a testament to all of us,” said Luckhardt. “Both programs have sustained themselves since we left. But remember how they were when we got here. W&J was in a malaise and Cal had 15 straight losing seasons. The players and coaches turned those programs around. I know I get a lot of credit and I think I’m responsible for some of it. But you could go through a litany of names.”