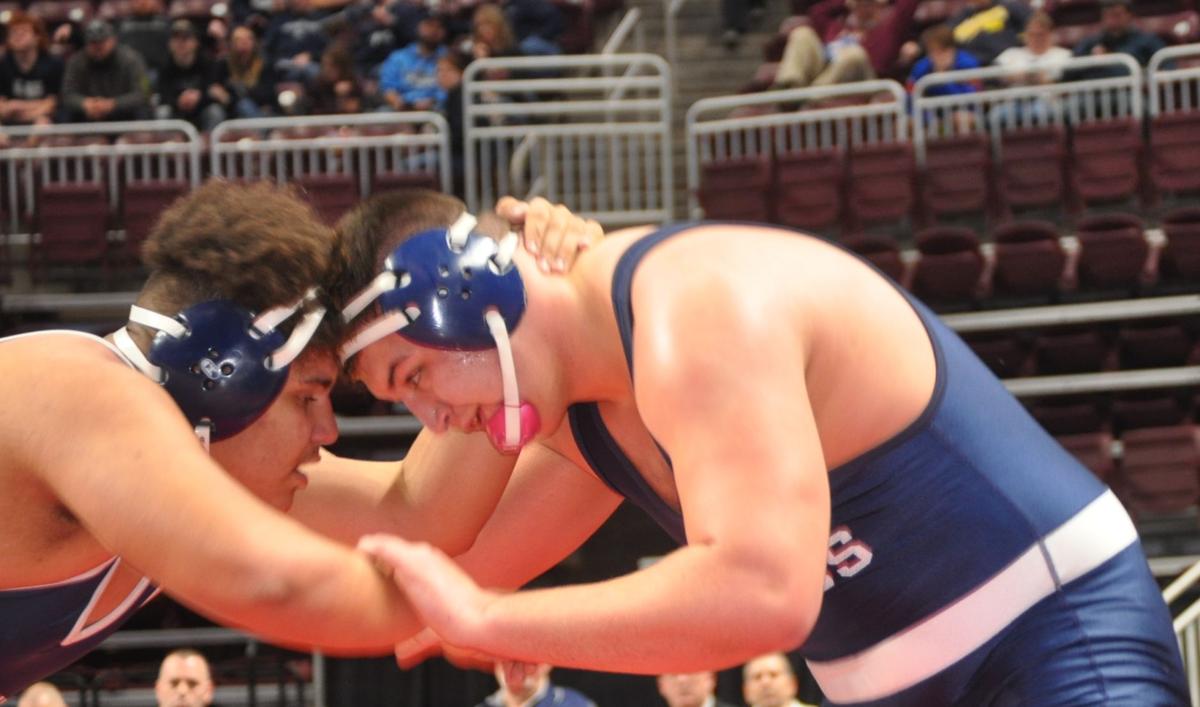 Riley Kemper of Burgettstown goes head-to-head with Emmanuel Ulrich of Mifflinburg at heavyweight in the PIAA Class AA Championships in Hershey Thursday. 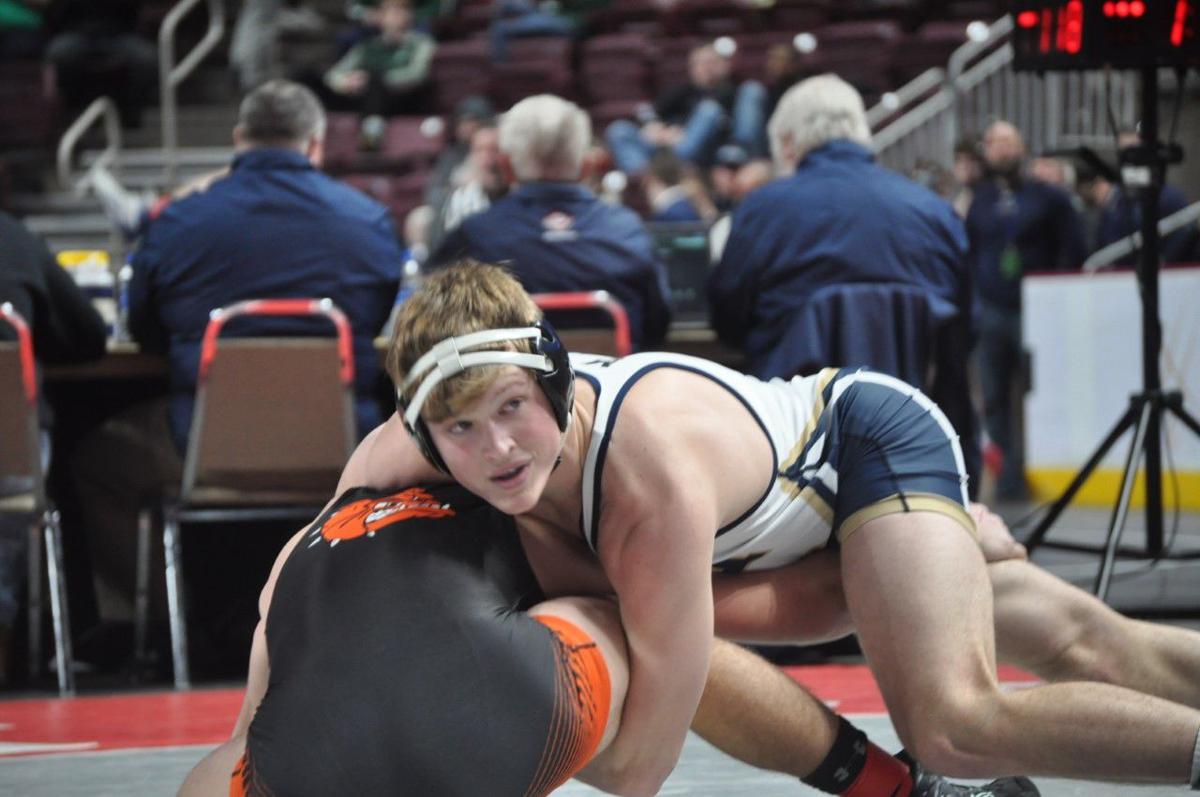 Ethan Barr of McGuffey has a cradle in on Hayden Packer of Jersey Shore in the 160-pound prelims of the PIAA Class AA Championships in Hershey Thursday. Barr won 4-3.

Riley Kemper of Burgettstown goes head-to-head with Emmanuel Ulrich of Mifflinburg at heavyweight in the PIAA Class AA Championships in Hershey Thursday.

Ethan Barr of McGuffey has a cradle in on Hayden Packer of Jersey Shore in the 160-pound prelims of the PIAA Class AA Championships in Hershey Thursday. Barr won 4-3.

HERSHEY – As the crowd made its way out of the Giant Center after the Thursday morning session, Burgettstown assistant wrestling coach Louie Vigliotti was busy showing a couple interested souls what was in his little box.

It was filled with rubbery bands, colorful beads and furry thingamabobs that looked like they belonged on the backside of a bunny rabbit.

Vigliotti was showing off his fly fishing kit that he carries with him just about all the time. Vigliotti fishes whenever and wherever possible.

Standing a few feet away was a bemused Riley Kemper, Burgettstown’s heavyweight wrestler. Kemper also is on a fishing trip, trying to snag a gold medal at the PIAA Class AA wrestling championships in Hershey.

The heavyweight had just pinned Emmanuel Ulrich, a freshman from Mifflinburg at 6:50 and was basking in the victory. Kemper was the only wrestler in Class AA from the Washington-Greene County area to advance to the quarterfinals. Seven others fell in either the preliminary or first rounds Thursday morning.

Quarterfinals begin at 9 a.m. this morning with the semifinals at 7:30 tonight. Finals will be held at 2 p.m. on Saturday.

Kemper will need some super strong line to reel in a victory today as his next opponent is a big fish in a smaller classification pond. You see, Colby Whitehall, Kemper’s opponent from Brookville is 36-0 and the defending state champion. Whitehall is the top-rated heavyweight wrestler in the country, so maybe two extra-strength lines will be needed.

“It’s not easy winning up here,” Kemper said. “Everyone is tough in the weight class. I came out a little flat and I’ll have to fix that. Competing up here is so tough.”

Kemper said it’s a plus to wrestle just once on the first day.

“It means I’m on the right track to my goal, which is winning a state title,” he said. “If you don’t think about that, you shouldn’t be here.”

Burgettstown freshman Joey Sentipal was eliminated after his second loss at 120 pounds, dropping a 6-0 decision to Nathan Holderbaum of Chestnut Ridge in the first round of consolations. Sentipal lost a tough 3-2 decision to Michael Myers of Williams Valley in the preliminary round.

McGuffey’s Ethan Barr won a 4-3 decision over Hayden Packer of Jersey Shore in the 160-pound preliminary round but fell short in the first round, pinned in 34 seconds by Andrew Cerniglia of Notre Dame Green Pond. He wrestles Cole Casilio of Johnsonburg next.

Barr’s teammate, Garrett Boone, lost in the 195-pound preliminary round when Garrett Storch of Canton pinned him in 1:34. But Boone rallied in the consolation round, pinning Adam Reinhart of Catasaqua in 3:02. Boone will wrestle Brayden Logardo of Saucon Valley.

“It was a little disappointing,” Boone said. “It was a down-up day. The first one, my nerves got the best of me. The second match, I just went out and had fun.”

Jefferson-Morgan‘s Jonathan Wolfe lost twice and was eliminated at 220. McGuffey’s Nate Yagle (132), Burgettstown’s Shane Kemper (152) and Fort Cherry’s Robbie West (220) are in the consolations and can finish as high as third place.