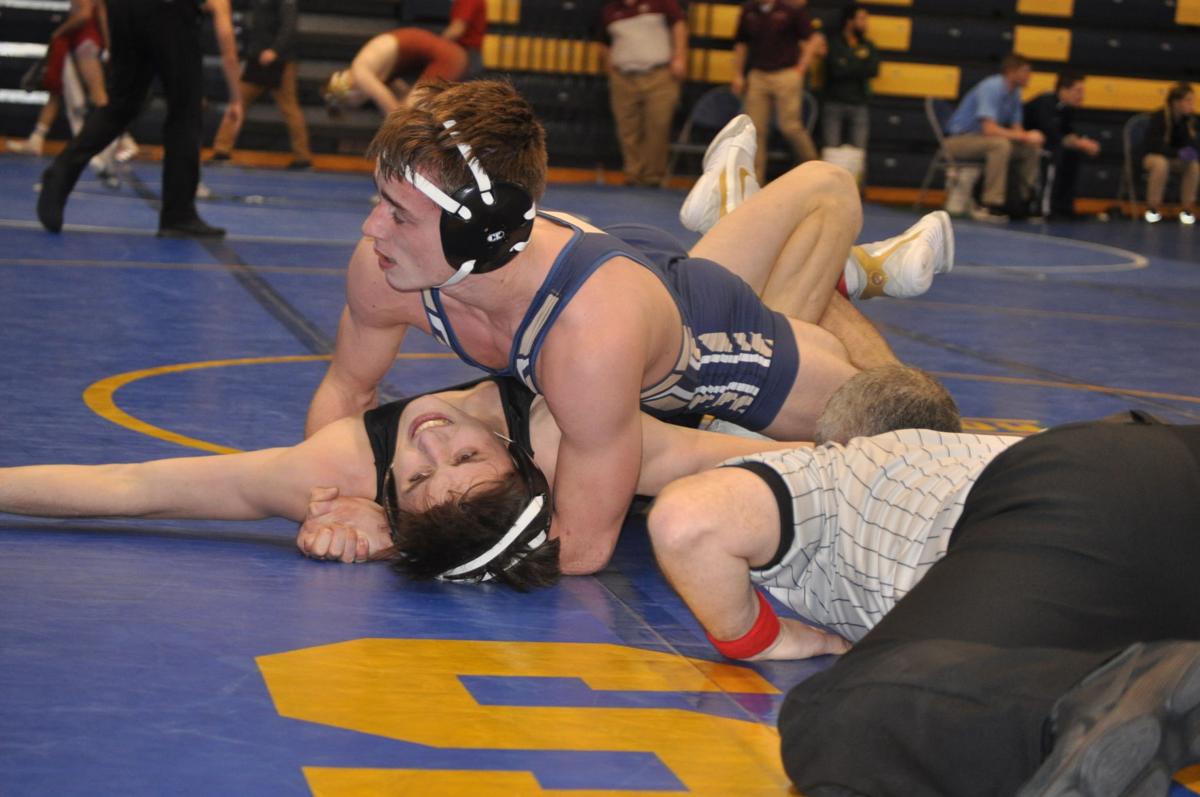 Todd Fisher of Beth-Center finishes a 5-point move at the buzzer for an 11-4 victory over Noah Weston of Bentworth in the 138-pound bout of the Section 1 Wrestling Tournament Friday at Canon-McMillan High School. 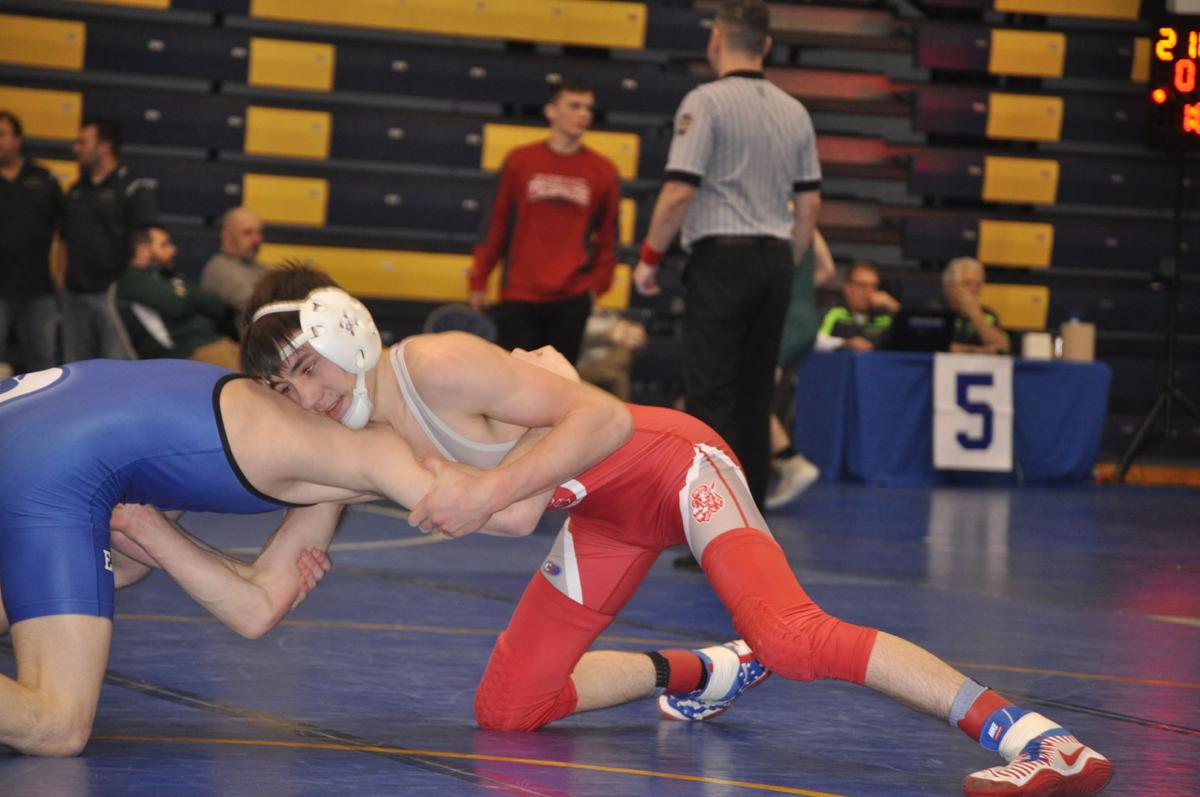 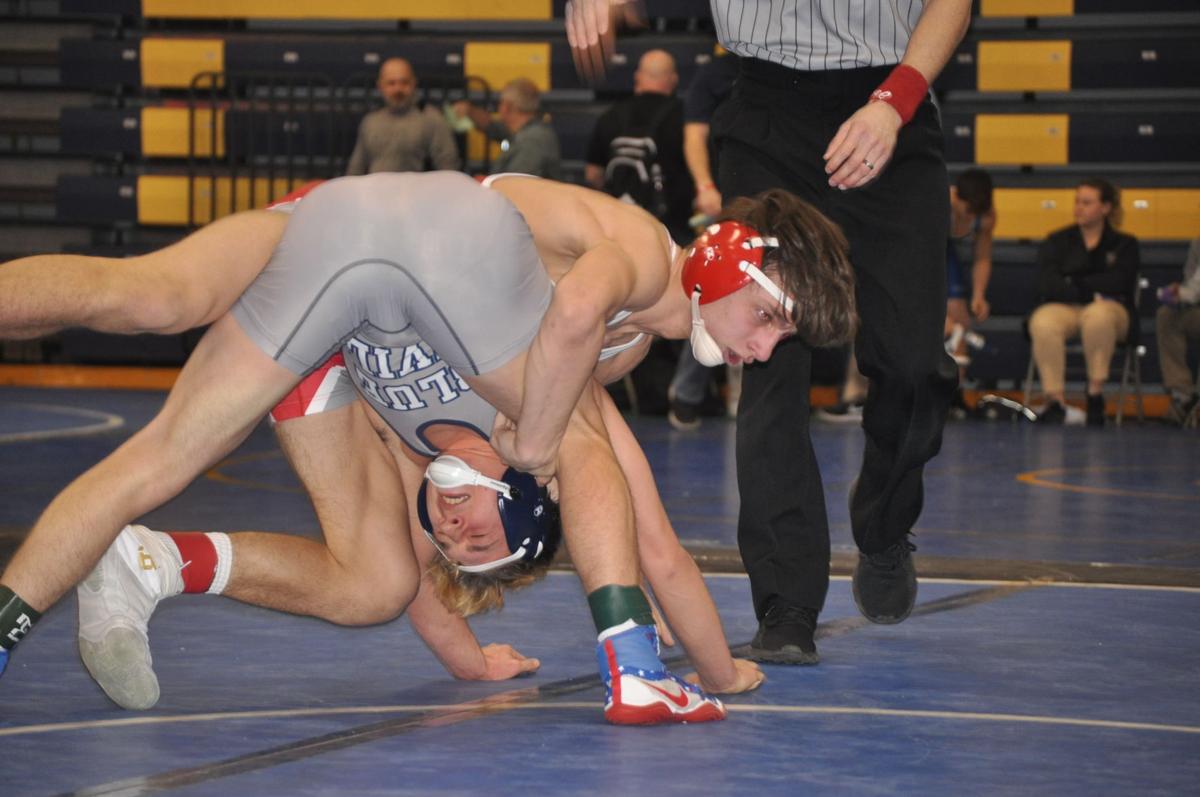 Ryan Green of Burgettstown, below, tries to shake Jake Tkach of Fort Cherry during their 145-pound bout  in the quarterfinals of the Section 1 Wrestling Tournament Friday at Canon-McMillan High School. Tkach won an 8-6 decision.

Todd Fisher of Beth-Center finishes a 5-point move at the buzzer for an 11-4 victory over Noah Weston of Bentworth in the 138-pound bout of the Section 1 Wrestling Tournament Friday at Canon-McMillan High School.

Ryan Green of Burgettstown, below, tries to shake Jake Tkach of Fort Cherry during their 145-pound bout  in the quarterfinals of the Section 1 Wrestling Tournament Friday at Canon-McMillan High School. Tkach won an 8-6 decision.

CANONSBURG – The old saying that familiarity breeds contempt was probably the proper way to describe their wrestling rivalry.

Well, maybe contempt is too strong a word.

Of course, a rivalry depends on both sides winning once in a while. And that’s where the frustrating part comes in for Bentworth’s Noah Weston. He just hadn’t devised a way to beat Beth-Center’s Todd Fisher.

The wrestlers had met four previous times this season and Fisher won each match. While Fisher dominated the outcome, the bouts were close. The two met twice in the season-opening Chartiers-Houston Tournament and Fisher won, 4-3 and 5-1.

They next met in the consolation semifinals of the Tri-County Athletic Directors’ Association Tournament in early January. Fisher needed a takedown in the first overtime to come away with a 7-5 decision.

The fourth time was in a regular-season dual meet. One point decided it, 4-3, in favor of Fisher.

The fifth time came in the 138-pound final of the Section 1 Wrestling Tournament Friday at Canon-McMillan High School. Fisher won an 11-4 decision but the match was much closer than the score showed.

Fisher led 6-4 with time ticking away and turned a desperate shot by Weston into a five-point move before the buzzer to win his second straight section title.

“He’s a really tough wrestler and every match we have, he never fails to make me work harder than I ever did before,” said Fisher. “I really respect him. He always gives me great competition and that’s what this sport is all about.”

Fisher said Weston makes him a better wrestler and wouldn’t be surprised if he has to wrestle him today in the WPIAL Championships, which start at 10 a.m. at Canon-McMillan High School.

“I wrestled him more than anyone in my wrestling career,” said Fisher said. “I’ve learned so much from him.”

Fisher said he uses what he learns from Weston to be successful in other matches.

“Noah has had the lead in four out of the five matches,” said Bentworth head coach Mike Shrader. “Give Fisher credit. He’s a little bit better scrambling on the mat. We’re hoping he gets another shot at him.”

Shrader said, as a senior Fisher has a little more experience than Weston, who is a sophomore.

“Todd is such a class kid,” said Shrader. “It’s a shame someone has to lose the match. We could have avoided him but Noah wants to wrestle him. He works so hard, wrestles all year round. I wouldn’t be surprised to see them wrestle again (today).”

Fisher came into this tournament as the top seed and Weston was second seed with a 26-9 record. Fisher was 28-9.