Wyatt Henson of Waynesburg tries to turn Andrew Gonzales of Trinity at 138 pounds. Henson won by fall in 57 seconds. 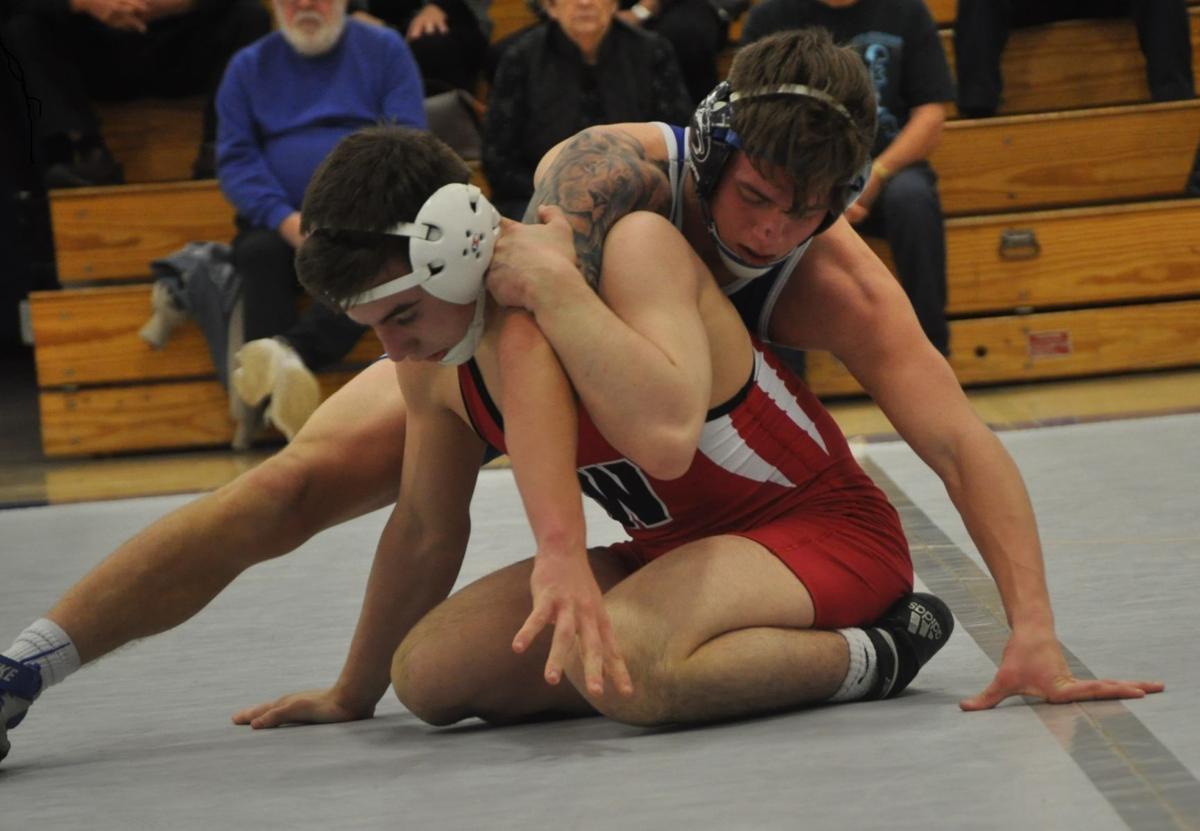 Colton Stoneking of Waynesburg (bottom) tries to get out from the hold of Trinity’s Micah Finley at 145 pounds. Stoneking won a 5-4 decision.

Wyatt Henson of Waynesburg tries to turn Andrew Gonzales of Trinity at 138 pounds. Henson won by fall in 57 seconds.

Colton Stoneking of Waynesburg (bottom) tries to get out from the hold of Trinity’s Micah Finley at 145 pounds. Stoneking won a 5-4 decision.

It was over before it started.

Waynesburg and Trinity combined for six forfeits, unusual for such an important wrestling dual meet.

Waynesburg won each of the contested bouts and came away with a 55-18 victory over the Hillers to wrap up the Subsection 4B title Wednesday night at Hiller Hall. That gives the Raiders (4-0, 6-0) the host duties for the Section 4 Team Tournament Wednesday.

Waynesburg wrestles South Fayette and Trinity takes on Canon-McMillan in the first round, then the winners wrestle for the section title.

The two third-place teams in the subsections also wrestle and the loser is eliminated. Waynesburg, Trinity, Canon-McMillan and South Fayette have qualified for the WPIAL Class AAA Team Tournament, which gets underway in two weeks.

So last night’s dual meet did not have a major effect on the qualifiers other than deciding the hosting rights.

“At the beginning of the season, we set a goal to win the state team title,” said Cole Homet, Waynesburg’s 132-pounder who had one of the team’s four pins.

“That’s what we’re fighting for, to dominate every team and to go to states and win that.”

None of the forfeits was for injuries, just rest. Waynesburg in particular has had a rugged tournament schedule that included Powerade, Beast of the East and Ironman.

“Getting to host it was the first test for us. Connellsville was also a big test for us, especially for seed purposes (for the WPIAL Team Tournament).”

Throckmorton told the wrestlers before the Trinity match that they had to “take care of everybody.

“Just worry about every individual match. If we wrestle the best we can, then the rest will take care of itself. These guys have had 30 to 35 matches, depending on their record and how they did in tournaments. There have been some very intense matches. That’s why we’re resting some guys. We have some tough team matches coming up. We’re just trying to keep their bodies healthy.”

Trinity’s points came from three forfeits. One of them went to Cole Whitmer for his 100th career victory. The match was stopped and Trinity head coach Mark Powell presented him a small trophy.

“I was counting it down,” said Whitmer. “I wasn’t real happy it came from a forfeit. I’ll take what I can get. I would have loved to wrestle at home but it’ll do. ... It’s been my all-time goal for my career and I’m just happy to get it over with. As a freshman, I set a couple of goals and this was the last of them.”

Whitmer became the 20th wrestler to join the Century Club and the first where Powell was in the chair for each one as head coach.

“It was pretty special, a cool feeling,” Powell said. “It’s nice to get it out of the way, with all of his goals. We’re looking ahead to the team stuff and then the individuals.”