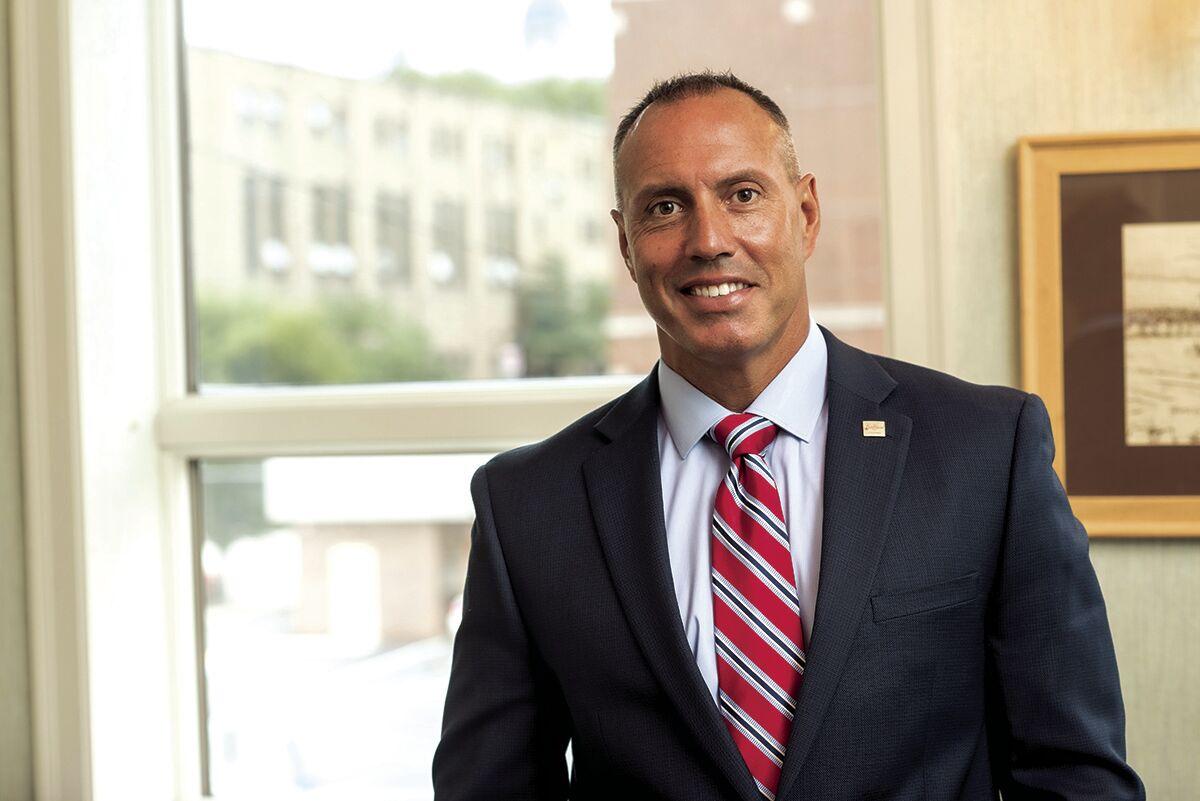 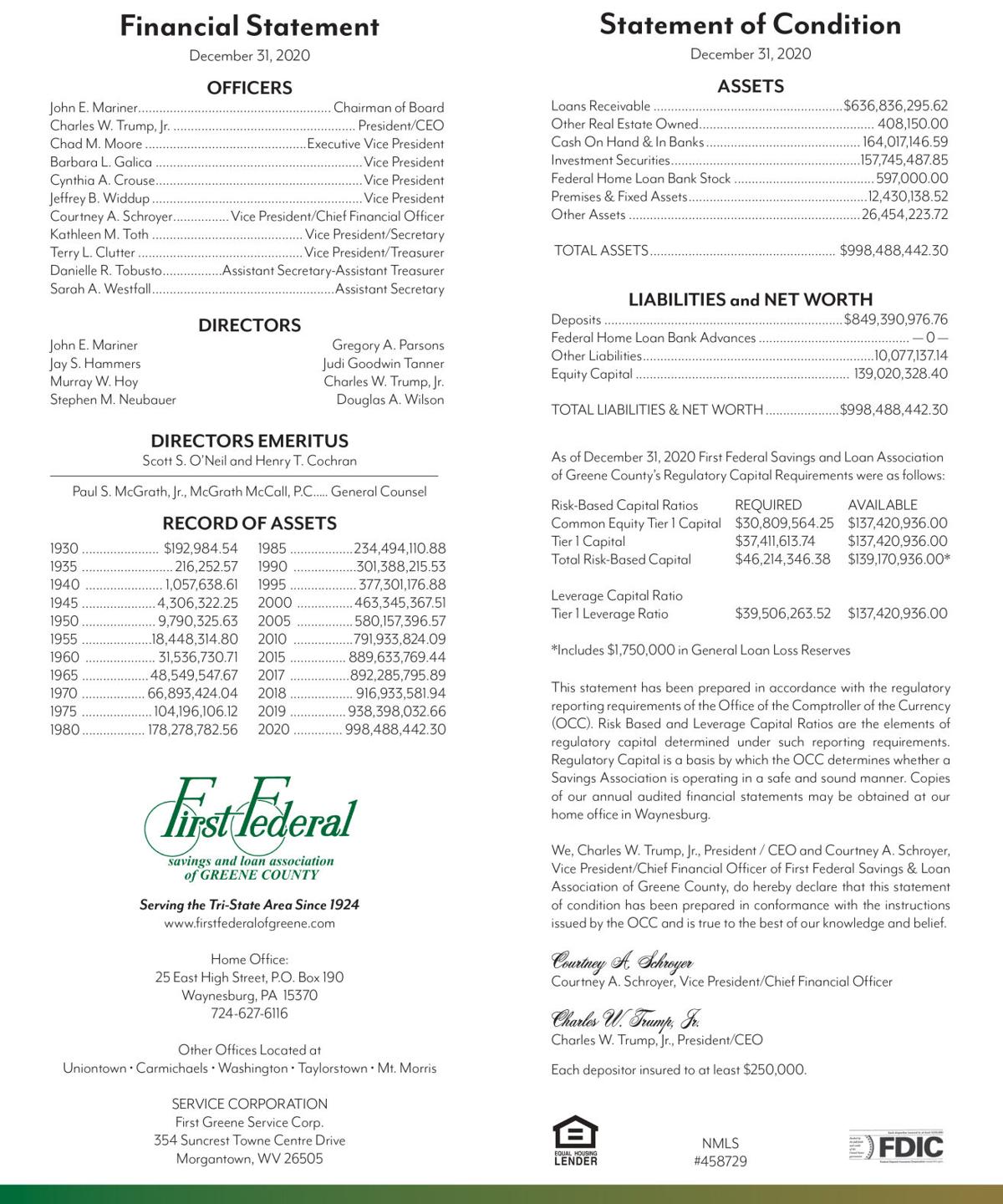 WAYNESBURG, PA – During its annual meeting of members Jan. 27, First Federal Savings and Loan Association of Greene County announced it had ended 2020 with record year-end assets of $998.5 million.

“This has been a year unlike any other year in our Association’s history,” said Charles W. Trump, Jr., President/CEO of First Federal of Greene County.

Against the backdrop of a global pandemic, a national election, social unrest and record low interest rates, First Federal of Greene County last year also recognized a significant change in the retirement of its ninth President/CEO, Judi Goodwin Tanner.

“For 37 years, Judi served our Association with considerable focus and a selfless commitment,” Trump said. “Her leadership of nearly 8 years continued a tradition of compassion and care for our organization and its employees.

Personally, I will remain incredibly grateful for her mentorship and support.”

Tanner continues to serve on First Federal’s 8-person Board of Directors alongside Trump, Chairman John E. Mariner, Gregory A. Parsons, Jay S. Hammers, Murray W. Hoy, Stephen M. Neubauer and Douglas A. Wilson. During the annual meeting, Hoy, Trump and Wilson were re-elected to 3-year terms on the Board. Henry T. Cochran and Scott S. O’Neil serve as Directors Emeritus.

Despite the difficulties of the year, First Federal ended 2020 with an increase of $56 million in deposits to end the year at $847 million. Loans closed for 2020 totaled $127 million, to end the year at $637 million. Both are increases over 2019 and remarkable accomplishments in a year marked by uncertainty and stress.

“Undoubtedly, the ability to navigate and thrive in this tumultuous year was only possible through the perseverance, commitment and dedication of our employees,” Trump noted in his President’s Report.

“It has been said that adversity builds character and that people make the difference,” Trump added. “This past year has clearly proved both notions to be true.”

In addition to praising employees for their part in the Association’s success, Trump recognized the Directors for their commitment to employee and customer safety and their focus on embracing technological advances that helped deliver uninterrupted service to customers.

“Our Board of Directors has demonstrated a complete and certain commitment in maintaining a strong technology front, with continued support for future enhancements,” Trump reported.

One change on the horizon is the brand modernization of First Federal’s mortgage loan origination subsidiary in Morgantown, W.Va. Known as First Greene Service Corporation since its opening in 1988, the subsidiary will now officially be known as First Greene Mortgage, a change that will herald a year of better brand visibility.

Due to its enduring stability, First Federal of Greene County was once again awarded the prestigious Bauer Financial “5-Star Rating.” This superior rating has been awarded to the Association for the past 130 quarters, or more than 32 years. The rating is based on the Association’s capital level, asset quality,

historical trends and loan delinquencies, among other factors.

“The Association is in a strong capital position entering 2021 and stands ready to continue its standard of excellence in service to its customers, generosity to its communities and support to current and future generations,” Trump noted. “A sincere thank you to all of the employees, officers and directors for the teamwork and endurance in this incredible year.

“I pray that 2021 brings health, calm and comfort, as we remain steadfast and unified in making First Federal of Greene County the best it can be.”

Since 1924, First Federal Savings and Loan Association of Greene County has served the residents of Southwestern Pennsylvania through a combination of traditional deposit and loan products and evolving technological convenience. From checking and savings accounts to mortgage and home equity loans, from online bill pay to mobile banking, First Federal of Greene County offers a variety of services to its customers, all while remaining committed to being “The People You Know, The People You Can Trust.”

Sponsored content brought to you by First Federal Savings and Loan Association of Greene County.