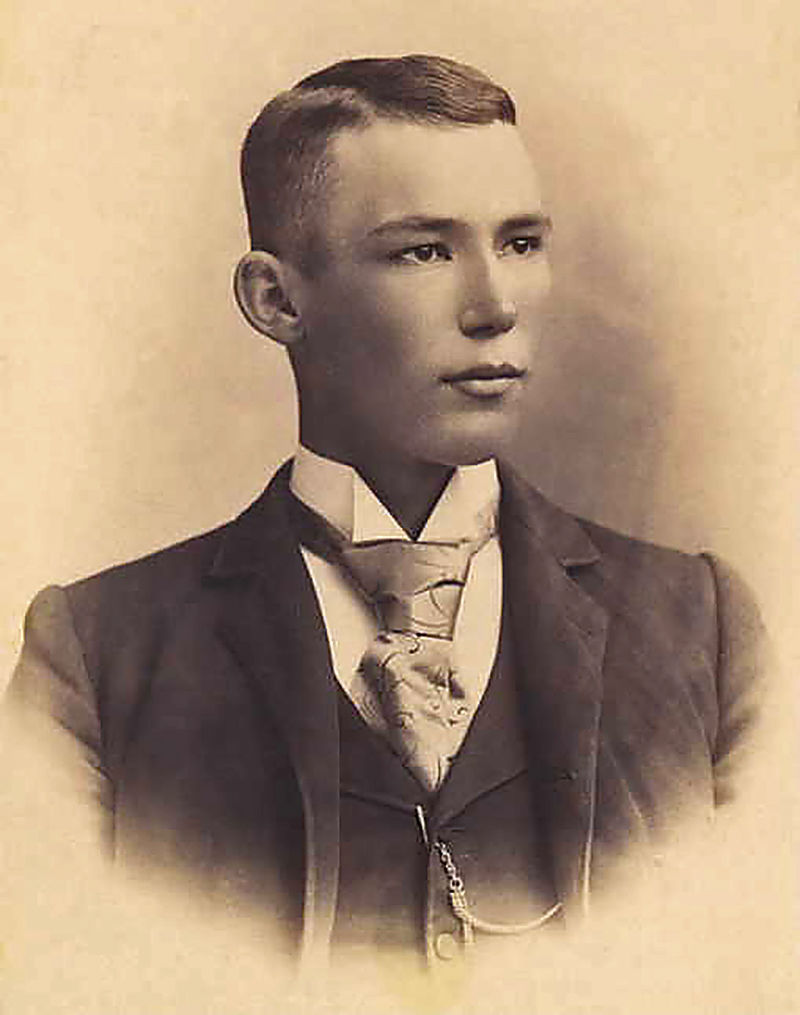 Daniel Lane, Harry’s younger brother, was 21 when this photograph was made. 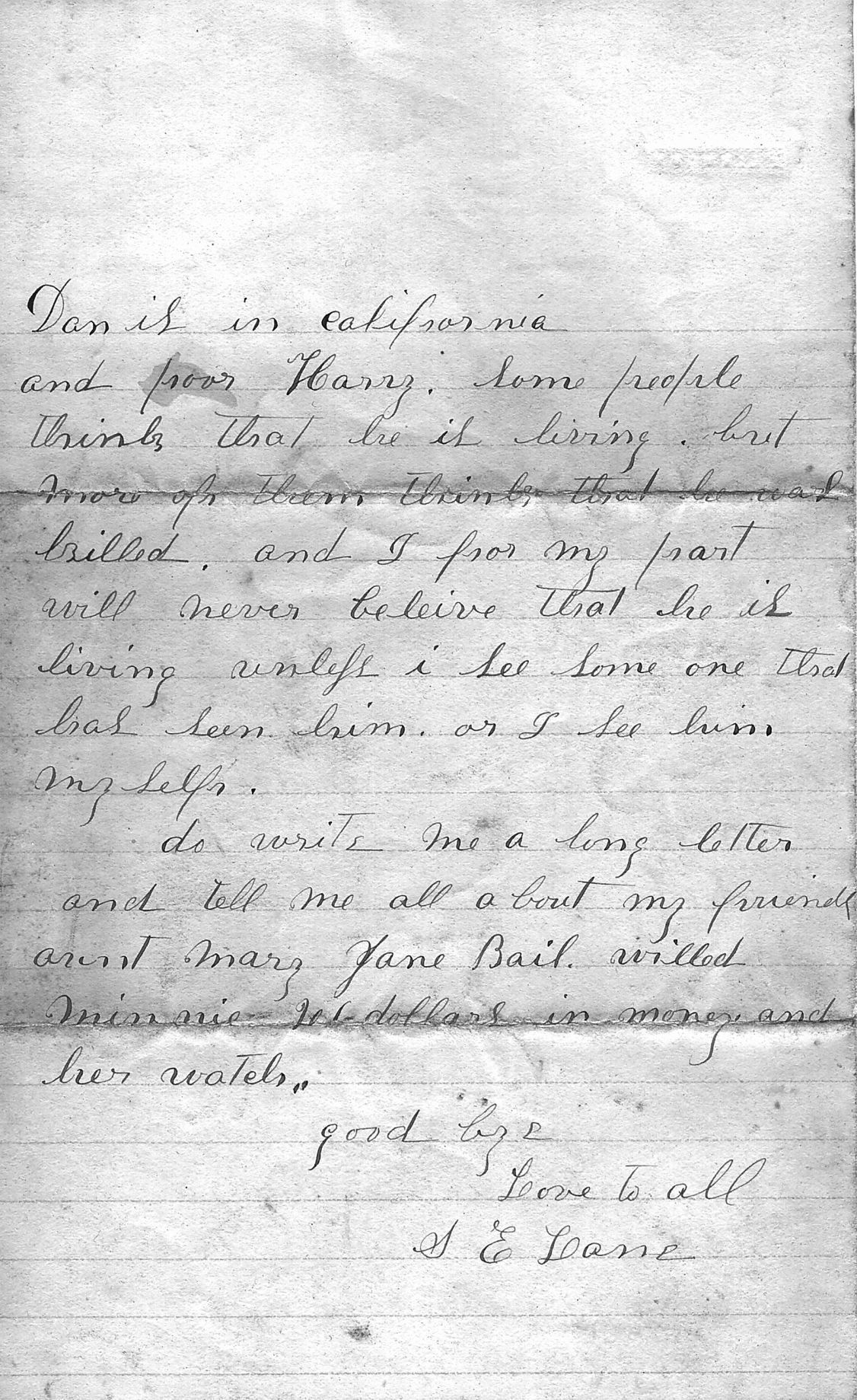 This is the last page of a letter written by Sarah Moore Lane to relatives in March 1896.

Daniel Lane, Harry’s younger brother, was 21 when this photograph was made.

This is the last page of a letter written by Sarah Moore Lane to relatives in March 1896.

The story so far: Harry Lane’s blood filled hat is discovered the day after he fails to reach home in South Strabane Township. All indications are that he has been murdered, and an extensive search for his body begins. After a neighboring farmer becomes a suspect, two hundred men converge on his house in search of the body, to no avail. After a month of fruitless searching, doubts arise about whether Harry has been murdered.

Through the summer, the hunt for Harry Lane’s body tailed off and the story faded from the front pages of the local newspapers. Compounding the grief and anxiety at the farmhouse of Harry’s parents, Robert and Sarah Lane, were new financial worries.

In August, Robert Lane filed for protection from his creditors in Washington County Court, which ordered on Sept. 25, 1893, that his property be sold at auction. The 289-acre farm was owned by Robert and Anna Knestrick England in 1820. They left it to their daughter Anna and her husband, Daniel Lane, from whom Robert Lane inherited it.

Robert was more than $14,000 in debt to a neighboring farmer, John Little, who purchased the property and the Lanes’ house at public auction on Oct. 26, 1893, for roughly the same amount. Among the 17 other people to whom Robert owed money was farmhand Stewart Early, who claimed $68.80 in back wages. Another was James Pees, who was owed $2,027 by both Lane and his missing son, Harry.

Little was the high bidder at the auction, purchasing the farm for $14,311, or $438 less than what Lane owed him, meaning that he acquired it for court costs and erasure of the debt.

Harry Lane’s parents and his five younger siblings were at that point homeless and would have to find a house to rent on whatever money the court allowed them to keep.

Despite Robert Lane’s protestations to the press shortly after his son’s disappearance, Harry was indeed facing financial problems in the form of a loan he could not pay back. In fact, his indebtedness had entered the public record in the May 1893 court term, when a lien was placed on his parents’ property for that debt just a few weeks before he went missing. But if Harry was having a problem making ends meet with his huckstering business, his friends, at least, were unaware of it.

By winter, the search for Harry’s body was over and rumors began to circulate about his whereabouts. Many people said that he had fled to Canada, and perhaps from there to one of the western states, but it was all speculation. Years went by without his parents, relatives or friends receiving any word about him, and most of them still believed him dead.

With no land to farm and earn a living, the Lanes fell on hard times. Harry’s parents, Robert and Sarah, could no longer support their four children. Sarah explained their situation to her cousins in a letter dated March 22, 1896, noting that George, 13, was living with a friend, Annie Garber; Robert, 16, was living with a couple in Washington; and Minnie, 22, was working as a domestic servant in town. Only Roy, 9, was still with his parents.

Excerpts from that letter, now in the possession of Sarah’s great-great-granddaughter, Linda Stanley, follow:

“Minnie has a nice place to live. There are just the man and wife and herself. They are very kind to her. She gets 3 dollars a week and does not have to wash or bake. Robbie is in town with a Mr. Wright. He goes to the Union School 10 months in the year. His average is 92 ½ per cent. Mr. Wright took him to educate him but he has had great trouble financially. He invested too much in foreign capital and broke him up. Some people believe he won’t be able to keep his town property, but I hope he will so that Robbie can be educated…

“We are going to move first of April. I can see the top of the house from where I am writing. It is about 6 hundred yards distant. It is a frame house of 6 rooms but a good deal out of repair. The house and 5 acres of ground was sold in February. Minnie came out and bought it. It was bid up to 4 hundred and 21 dollars. I gave her what I had earned since we broke up, and Robbie gave her what he had earned since he went to town. He earned 5 dollars a month delivering papers before school hours, and he don’t have to spend any of it, for they keep him in everything that he needs. So Minnie made her first payment of 2 hundred dollars. So you see if we live and keep our health in a year or so we will have it paid for. I only got 9 dollars out of the hundred that grandfather gave me. I thought it was pretty hard, but such is the way of men.”

Apparently, of the $100 Sarah was given by or inherited from her grandfather, $91 went to the creditors as a result of the bankruptcy.

At the end of the letter, Sarah wrote about her son Daniel, 24 at the time, and about her tragic loss:

At a time when long-distance communication was limited to the U.S. Mail and the telegraph, when financial transactions were mainly in cash and never tracked, when no one was asked to show identification to travel, and when people were rarely photographed, it was easy to disappear. Anyone who wished could move to another part of the country and begin a new life, and many Washington-area residents believed that was exactly what Harry Lane did. Once memorialized as a tragic victim, many folks now thought of him as a scoundrel.

Yet, the belief a murder was committed never went away, and an event 15 years later brought that theory to the surface again.

“In 1908 some bones were dug up near Zediker Station, not far from the scene of the supposed murder,” wrote Earle Forrest in his 1926 “History of Washington County.”

“The finders believed them to be human and took them to the sheriff’s office in Washington with the announcement that they had discovered the long sought remains of Harry Lane. The deputy in the office had worked on the Lane case, and when he examined the bones, he admitted that they did not look like those of a human being. For an hour or two the Harry Lane excitement broke out again in Washington, and many people recalled the exciting events of 15 years before. A physician was summoned, but after a careful examination he pronounced them to be the last earthly remains of some unfortunate calf.”

No amount of searching would ever turn up the bones of Harry Lane, because Harry was not dead. The blood found in the hat beside the lane not far from the National Pike was not Harry’s blood.

His friends who so firmly believed that he was slain would all be dead themselves before learning the fate of Harry Lane. And it would take more than a century before the mystery was finally solved.

Next: The mystery solved