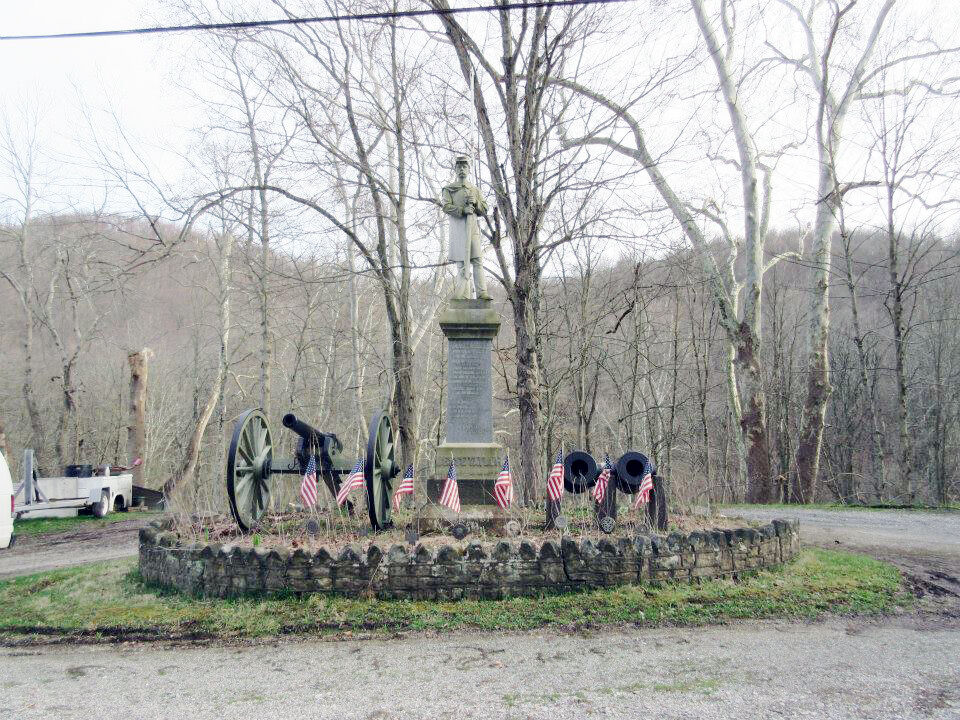 This memorial stands in honor of Jesse Taylor, who was Greene County’s first casualty of the Civil War. 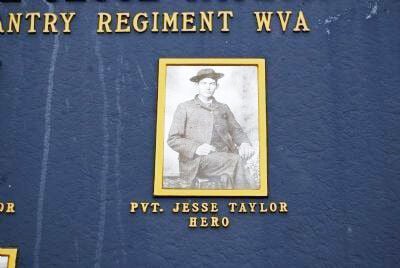 This memorial stands in honor of Jesse Taylor, who was Greene County’s first casualty of the Civil War.

As president of the Marshall County Historical Society in Moundsville, W.Va., Chaddock later attended a lecture by David Mellott and Mark Snell, authors of “The Seventh West Virginia Infantry: An Embattled Union Regiment from the Nation’s Most Divided State.”

During the lecture, she heard the story of the soldiers recruited from nearby Greene County and Monroe County, Ohio. They joined together to fight for the Union with others from West Virginia’s Northern Panhandle. One of them, Jesse Taylor, born Sept. 26, 1840, near Jollytown, became Greene County’s first casualty of the war.

During the lecture, held July 17, in the amphitheater of the Grave Creek Mound Archaeological Complex, Chaddock learned how the regiment earned the nickname the “Bloody Seventh.” Although it fought in many of the war’s major battles, including Winchester, Antietam, Fredericksburg, Chancellorsville, Gettysburg and Petersburg, Taylor met his end at a minor skirmish in the relatively bloodless Romney campaign on Oct. 26, 1861.

Taylor is described in an article in the Morgantown Post dated Sept. 10, 1892, by a fellow “comrade” as “a fine specimen of manhood, large and muscular, standing six-foot, two-inches in height” at a time when the average height of a man was 5-feet, 8 or 9-inches.

Taylor’s comrade goes on to say that he was sober, honest and an upright Christian, having embraced religion at a revival in the M. E. Church in Jollytown the winter of 1859 and 1860.

“Jesse enlisted (in the regiment) right after Lincoln called for additional troops after the Union lost the Battle of Bull Run,” Mellott said in a phone interview at his home in Cleveland, Ohio. “The regiment’s original goal was to protect the B&O rail line, important for the moving of troops and supplies west to east.”

A private in Captain J.B. Morris’s company, Taylor is described in the Post article as in “one of the merriest moods” the night before the unit’s march from New Creek – now Keyser, W.Va., to Romney. He is said to have laughingly boasted that he was going to Romney to play ball with the rebels and that he planned to catch the enemy’s cannonballs and turn them back on them.

Under the command of a Col. McDonald, the Confederates held the town and opened fire when the Union troops were within a half-mile from town with two or three brass pieces posted in the cemetery near the church. After firing two or three shots, Taylor was hit by a shell fragment, fell to the ground and died instantly without uttering a word.

Except for the gurgle of blood in his throat, one dying moan was the only sound that emanated from the dead man’s throat,” reported his comrade in the Post article. Taylor died a short six weeks after leaving his home near Jollytown. He’s now buried alongside his father William, mother Lydia and other relatives in a small family plot on the farm once owned by Grace Taylor Wise near Jollytown in Gilmore Township.

Of Taylor’s two brothers, Titus and Thomas, the latter also served in Company F of the Seventh Regiment of the West Virginia Volunteer Infantry. Thomas was discharged from the army the winter of 1862-63 for a disability contracted while in service to his country.

Taylor’s own grandfather, John Taylor Sr., came to the United States as a British soldier during the Revolutionary War, according to descendant Marion Taylor, a retired police chief from Brook Park, Ohio. He later deserted and fought for the American cause after joining a regiment from Connecticut. He died in 1848, shortly after his wife, Mary.

According to an article in the Washington Observer-Reporter dated March 30, 2001, members of Jesse Taylor’s company erected a large stone monument in his honor on August 25, 1892, at the western edge of Jollytown. The granite memorial features the figure of a soldier 6 feet, 2 inches tall, standing on a 10-foot pedestal.

Waymarker.com describes the monument as having a statue, cannon, and two mortars. The cannon was originally at West Point and was known as Hoover’s Battery. It was moved to New York Harbor to defend the Harbor during the Civil War. After the Civil War, a political group obtained the cannon from the government to use at political rallies. It somehow ended up in Greene County and was abandoned.

Local veterans found the cannon in a junkyard and restored it. The cannon was again abandoned and was picked up by a local medicine show as a curiosity. After several years, veterans’ organizations, headed by Colonel Charles I. Faddis, were instrumental in placing the cannon at the Jessie Taylor Memorial.

Taylor also earned additional local recognition when a rural post office near his family farm was named Hero in honor of his supreme sacrifice. Today, a historical marker occupies the site of the town.

The front side of the marker reads, “The village of Hero was originally located on the land where this sign proudly stands. Today, Hero is identified by a dot on most county maps. Even so, the past has marked this spot sufficiently to give it a right to the title of historical. Within sight of Hero is the grave and, almost within a stone’s throw, the birthplace of Jesse Taylor, the first soldier from Greene County PA. to die in action in the Civil War and in whose honor the village was named.”

A beautiful monument was erected at the nearby village of Jollytown in 1892. At the head of the little brook called Bland’s Run that gurgles through the beautiful valley facing Hero on the north is to be found the cemetery and once site of Gilmore Township’s first church now known as Old Mount Tabor that was built in 1818.”