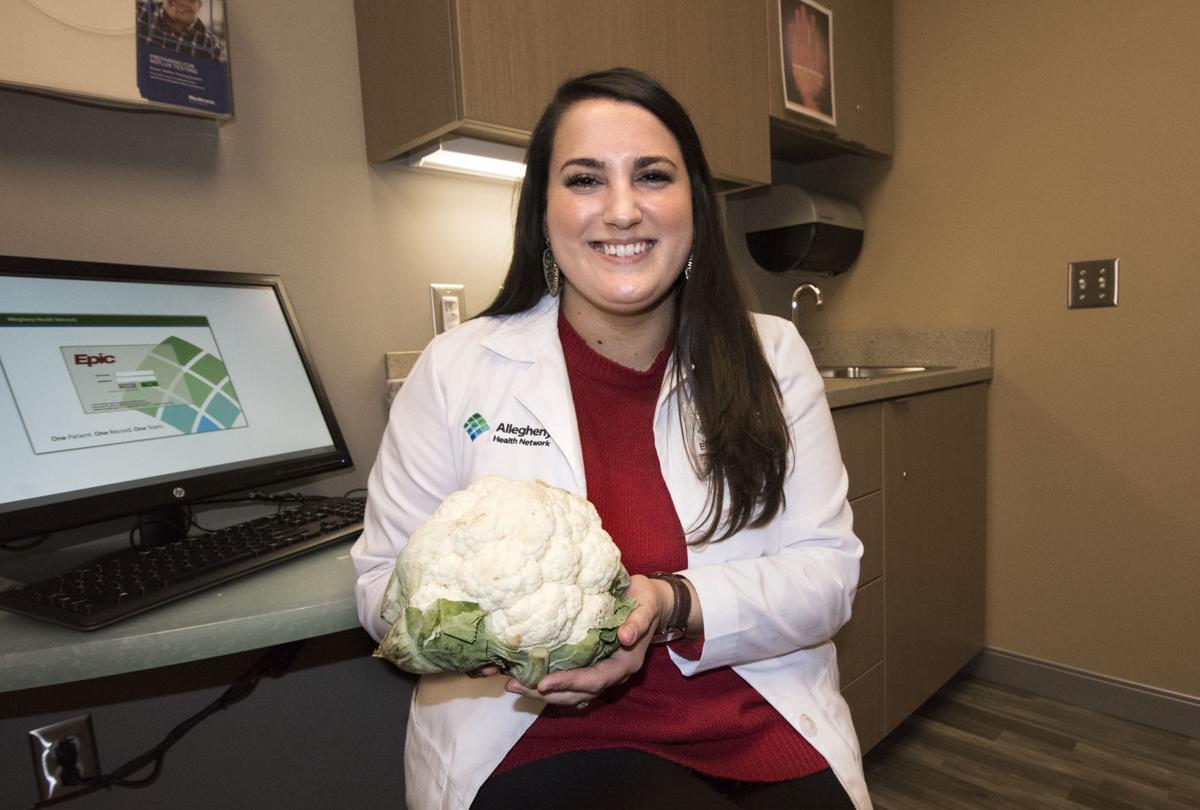 Elise Wood, a dietition with Allegheny Health Network in McMurray, holds a cauliflower Thursday in her office. 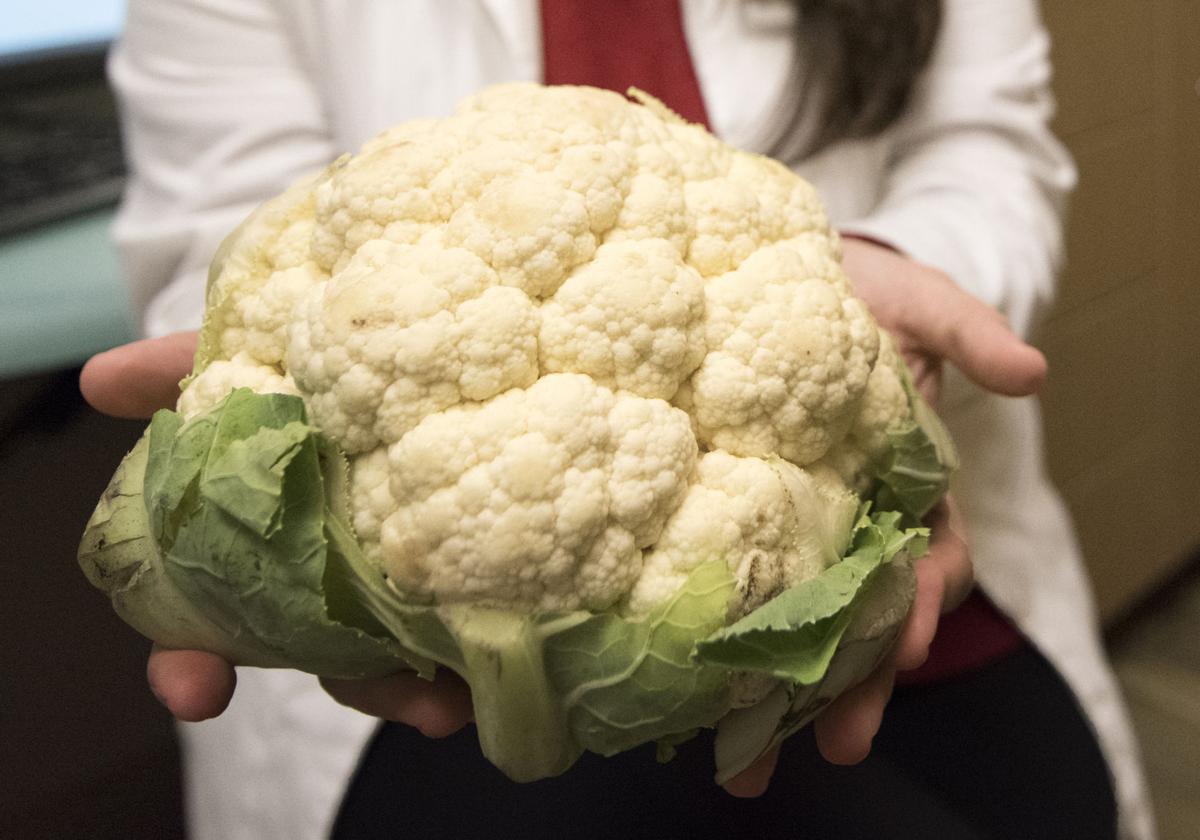 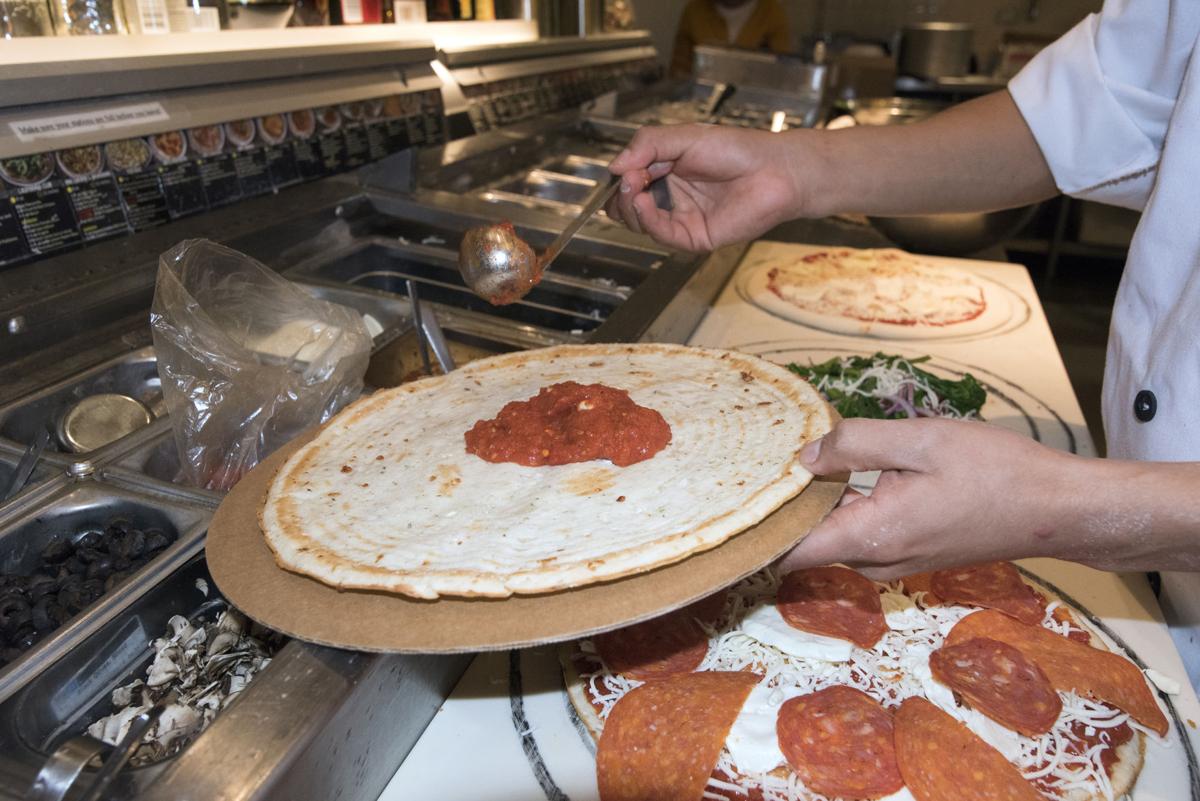 A cook at California Pizza Kitchen makes a Margherita pizza Wednesday with Italian tomatoes, fresh mozzarella, fresh basil and parmesan made with a cauliflower crust.

Elise Wood, a dietition with Allegheny Health Network in McMurray, holds a cauliflower Thursday in her office.

A cook at California Pizza Kitchen makes a Margherita pizza Wednesday with Italian tomatoes, fresh mozzarella, fresh basil and parmesan made with a cauliflower crust.

Cauliflower is having a moment.

The unassuming member of the cabbage family – long overshadowed by greens such as kale and broccoli – has become the darling of vegetable lovers.

Nutritionally, cauliflower is a powerhouse: high in fiber and a good source of vitamins C and K, said Elise Wood, a dietitian with Allegheny Health Network’s Bariatric and Metabolic Institute.

Every cup of cauliflower contains only 5 grams of carbohydrates and about 25 calories. Compare that to white rice, which contains about 150 calories and 34 grams of carbs per serving.

Cauliflower has expanded far beyond the supermarket produce section. As more Americans embrace low-carb, plant-based, gluten-free diets, cauliflower is being used in recipes ranging from shepherd’s pie and jambalaya to chocolate brownies and muffins.

In the freezer section of most grocery stores, shoppers can find cauliflower chopped to resemble white rice, or pureed as a substitute for mashed potatoes.

“Cauliflower has a mild taste that takes on the flavor of anything you cook it with. There are a number of people trying Ketogenic, Paleo, South Beach and other low-carb diets, and they’re using cauliflower, with its natural starchiness, to replace flour, rice, potatoes and other carbs,” said Wood, who was diagnosed with Celiac’s when she was 15. “And I’m definitely seeing more people who are aware of Celiac disease and who are gluten intolerant, and now they have more options.”

If shrimp is the fruit of the sea, as Bubba Blue said in “Forrest Gump,” then cauliflower is the shrimp of the vegetable world. There are almost limitless possibilities for how cauliflower can be prepared: cut it into thick slabs as a substitute for steak; turn it into “Buffalo wings;” use it as a stand-in for General Tso’s chicken; or shape them into tater tots. Cauliflower is delicious raw, roasted, boiled, or fried.

But the dish on which cauliflower has really made an impact is pizza.

The cauliflower pizza crust – a mix of shredded cauliflower, cheese, eggs and seasonings – has enabled those attempting to follow a gluten-free or low-carb diet to indulge, guilt-free and symptom-free, in a slice of pie.

The pizza chain California Pizza Kitchen, which originally launched a line of certified gluten-free pizzas in 2013, introduced a cauliflower pizza crust to its menu in January 2018, and it instantly became a hit.

“People love it,” said Anna Houck, general manager of CPK in Ross Park Mall, in Ross Towwnship. “People order it instead of a traditional crust just because they like the flavor and they think the cauliflower crust is delicious. I get it all the time.”

Houck noted the vegetable crust is a permanent menu option and it can be used as the base for any CPK pizza.

“We have seen a steady increase in guests wanting to incorporate more veggies into their meals, so putting our spin on cauliflower-based pizza crust seemed like a natural next step in our innovation journey,” said Brian Sullivan, CPK’s executive chef.

The cauliflower crust accounts for more than 10 percent of all CPK pizza orders.

California state resident Amy Lacey, who suffers from lupus, turned to cauliflower as a healthy and tasty alternative to some of her favorite foods. The cauliflower substitutes, she discovered, do not trigger her autoimmune responses.

Lacey launched her own company, Cali’flour Foods, which sells frozen cauliflower pizza crusts, flatbreads and other products online, and wrote a cookbook, Cali’flour Kitchen, that includes over 125 recipes using cauliflower.

“I think cauliflower is absolutely one of the best superfoods out there,” said Lacey, noting its many health benefits. “How lucky are we to have access to such a simple yet nutritionally dense vegetable that really takes on whatever flavor you add to it?”

But Wood pointed out that cauliflower’s popularity shouldn’t come at the expense of other foods and vegetables, like the poor potato.

“It doesn’t mean that potatoes are bad. I think, in general, there are no good or bad foods. Carbs and starches are demonized, but it’s more about how much or how often they’re consumed,” said Wood. “I’m all for eating more vegetables, but all foods fit.”

CPK’s Sullivan is confident cauliflower’s popularity won’t fade. The vegetable, he believes, is permanently entrenched in our food consciousness.

So, go ahead and eat the pizza.