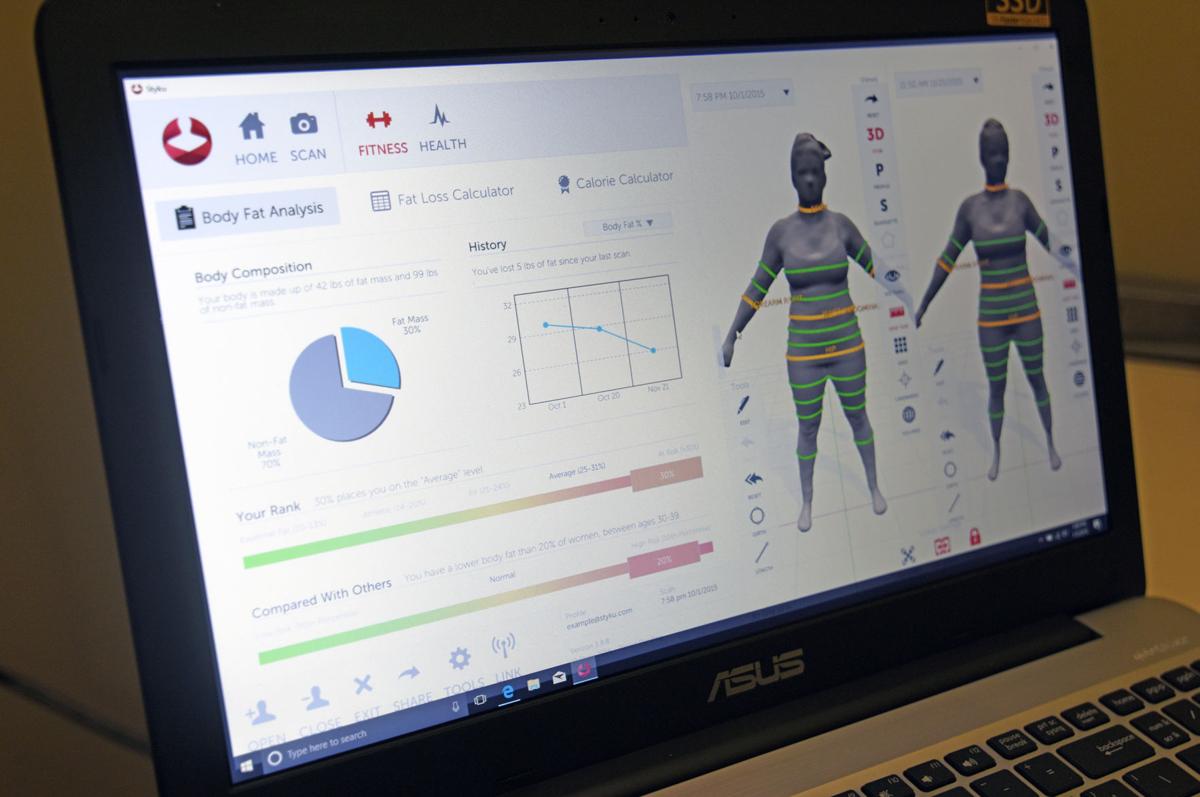 A sample file shows what The Styku Machine can do. 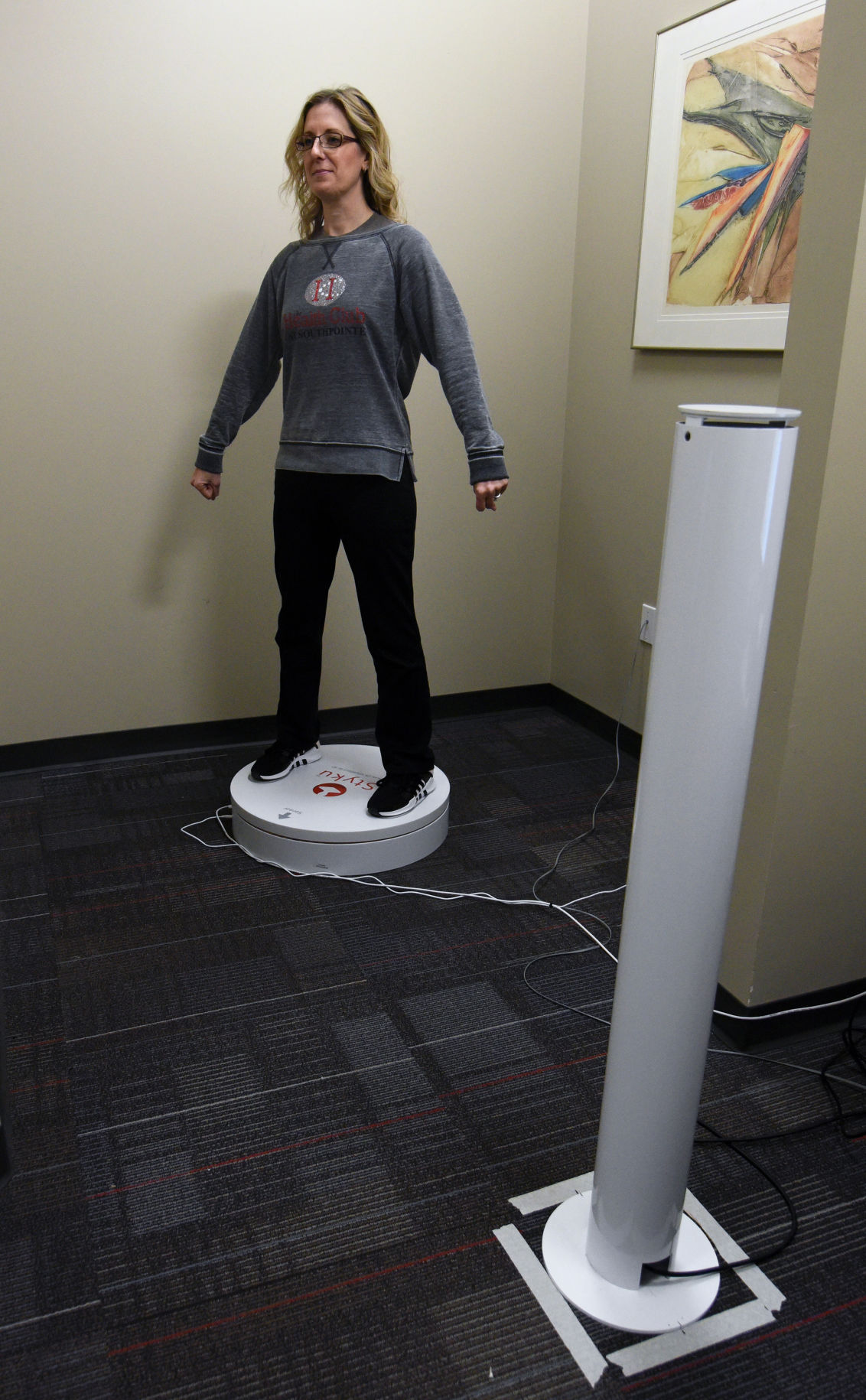 Standing 5’5” tall and 135 pounds, I would consider myself overweight, particularly if I listened to the voice in my head of my childhood pediatrician. He measured weight by allowing 100 pounds at five feet and then five pounds per every inch thereafter. According to his calculations – which have been engrained in my head since those early years – I am 10 pounds overweight, despite vigorous daily workouts and a relatively healthy diet (we all indulge once in a while, right?).

A month ago, however, I was introduced to Styku, a fitness tool that tracks and records every measurement that you can possibly think of.

Styku, which has been available at The Health Club at Southpointe for almost a year, is a lightweight, portable and intuitive software system that can perform a 3D body scan in about 35 seconds using a simple turntable and a 3D camera. In less than a minute, Styku can extract millions of measurements with 2 mm accuracy and create a person’s body image in 3D technology.

“Styku uses known circumference methods, such as the U.S. Navy method and others, to measure body fat directly from a person’s waist, hips, and other girth measurements,” says Cindy Hina, manager of The Health Club at Southpointe. “There is no need to schedule hydrostatic weighing or a DXA scan. Styku is a precise and reliable way to calculate lean and fat mass.”

I was told to step on the turntable, which is a circular platform, and place my feet where directed. I held my arms out to 45 degrees and after Lindsay Schmitz, MS, RD, LDN, nutritionist at The Health Club at Southpointe, set up the computer system to sync with Styku, I began slowly spinning while the camera in front of me scanned my entire body. After 35 seconds, the spinning stopped and I was able to get off and see my results on the computer. This all happened in less than about two minutes. And the results I received were far more extensive than any other fitness tracker tool I’ve tried.

“Styku assembles a 3D model from more than 600 infrared images taken in seconds,” Hina says. The 3D model can be rotated, panned and zoomed to evaluate each body part in great detail. Once a model is created, Styku’s advanced feature recognition technology finds detailed landmarks on the body, such as the hips or bust point, which are used to extract circumferences, volume and surface areas for various regions of the body. The profile overlay of each body scan makes viewing changes in someone’s shape obvious. Personal trainers can easily impress their clients by showing them their progress.”

There are several reasons for which someone may want to experience a Styku test. For me, it was just curiosity of my measurements and to assess whether my workouts were paying off the way I had hoped. It was fascinating the amount of information that the machine is able to gather after only several seconds. For others who are just beginning an exercise routine, it may be a good assessment of their current measurements so that they have something to compare as they progress.

“The main reasons to do initial fitness testing before beginning a program is for baseline, safety and motivation,” says Kimber Waldorf, fitness director at The Health Club at Southpointe. “Having a fitness baseline helps not only design an appropriate fitness routine, but also provides feedback with measurable improvements. Testing before beginning an exercise program will help determine if there are any underlying health risk issues. Being able to show measurable improvements through repeated testing every three to six months from that initial test can help modify fitness programs and goals.”

Perhaps one of the main measurements gained from Styku, besides weight, is a person’s body fat percentage. In my case, it was 15 percent, which is considered athletic, and admittedly, began restoring all of the self-confidence that I had lost when remembering my pediatrician’s guidelines. I also learned that I am at no risk for health conditions such as heart disease, which Styku can measure based on your body’s profile. And, I learned that if I were to lose weight to reach that “magic” number most of us have, it would be too much weight, given that my body fat percentage would fall too low, or into the “essential fat” category.

“Essential fat is the amount of fat considered necessary to keep your body functioning properly,” Waldorf explains. “Essential body fat for men is between three and five percent. For women, that number is 11 to 14 percent.”

According to Waldorf, when designing a fitness routine, it is important to increase lean body mass while decreasing fat percentage safely. Combining a nutritional program with personal training with produce positive results.

“Trainers can use Styku to determine how much fat their client would like to lose,” Hina says. “To do this, they set an activity level and target date. Using basic energy balance, Styku reveals a user’s needed caloric deficit to reach his or her goal. The scanner also can demonstrate where fat is being lost by digitally measuring the person’s waist and other essential body data. Styku automatically creates a model of the daily expenditure and then uses the daily deficit to estimate the maximum caloric intake the person can consume to reach their fat loss goal.”

The cost for a single session is $40, but sessions also can be purchased as part of a personal training package. To make an appointment, call The Health Club at 724.597.0014.