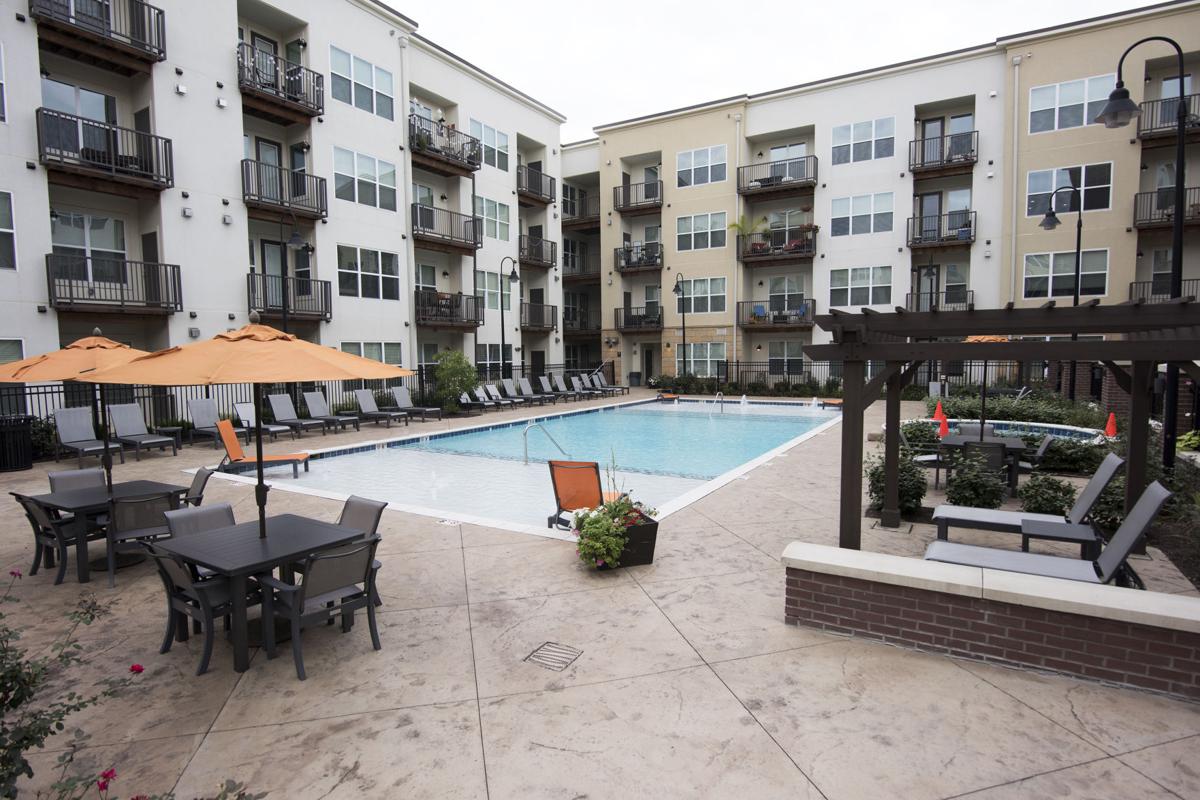 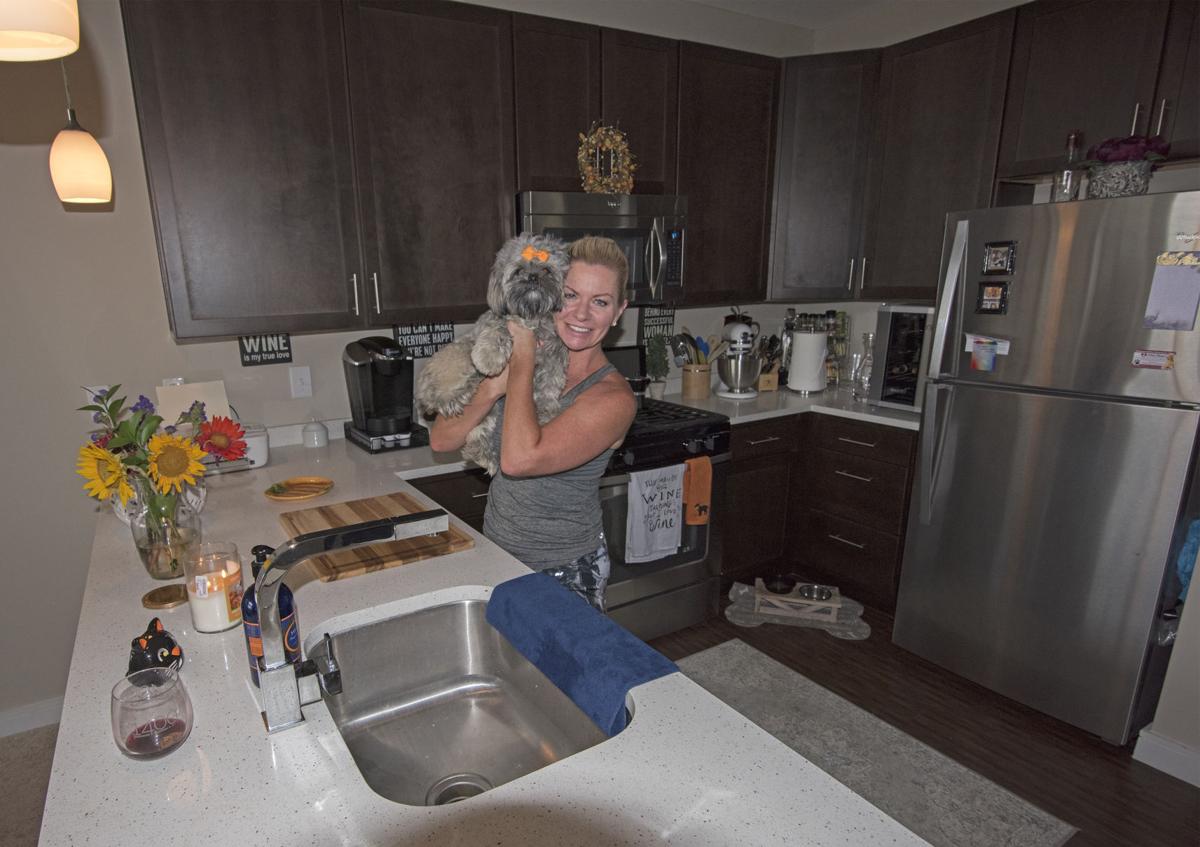 Heather King and Lola in King’s apartment at 1400 Main. 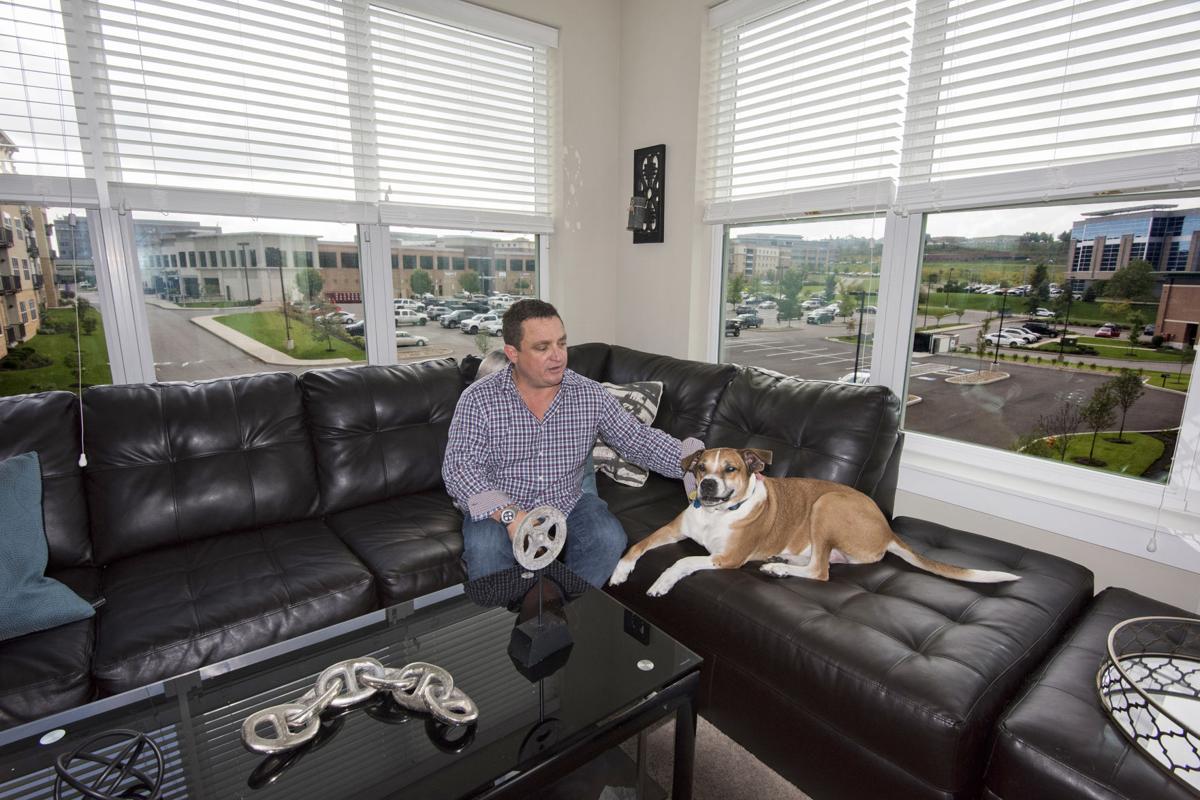 Matt Lanctot with his dog Baxter, in their apartment at 1400 Main.

Her name is Lola and she’s a Lhasa Apso. The friendly and frenetic canine lives with Heather King, and residing at 1400 Main makes them feel as if they are in the Copacabana of apartment complexes.

“I knew I wanted to live in Southpointe and I knew (the rental units were somewhat new), so this was an easy decision,” says King, a territorial manager for a medical device company, who relocated a year ago to this residential showpiece near the business park’s Town Center. Lola declined comment.

“I like the apartments themselves,” King continues. “If anything goes wrong, it’s fixed that day. The landscaping is beautiful. I love the pool and the gym, and I love how (management) is dog-friendly.”

If a random sampling of residents is an accurate barometer, King is not the only one enamored of the development. 1400 Main celebrated its third birthday recently, and it has progressed impressively beyond the toddler stage. The 376-unit complex has 93 percent occupancy, according to a Pittsburgh real estate official, having regained its equilibrium following a tenant drop-off that coincided with the oil and gas downturn, which finally ended about a year ago.

Amenities in this upscale complex are appealing. They include one- and two-bedroom apartments, guest suites, 651 structured parking spaces, a heated outdoor pool, a clubhouse and dog-walking paths.

These qualities should be attractive to potential buyers. About three weeks ago, the Observer-Reporter was among news outlets reporting that the 370,000-square-foot complex was for sale. GMH Capital Partners, the eastern Pennsylvania firm that built and opened the complex, assigned the sale to the Pittsburgh office of HFF. There was no list price, but Nick Matt, a senior managing director for HFF, says he anticipates selling 1400 Main for about $80 million. He added that it may not take long to close a transaction.

Inside the apartment she shares with Lola, King extolls the virtues of being a few hundred yards from Town Center, an eclectic mix of popular dining spots, retail, professional offices and recreation. “We frequent the restaurants,” she says, during a visit with Matt Lanctot, a friend and tenant in another unit. “You can go anywhere and know five people or more.”

“It’s like a college dorm, but with people with money to blow,” says Lanctot, an oil and gas leasing agent who works for a company in the park. “There are so many events. It’s a big community here, a big social environment.”

Lanctot, who oversees a 1400 Main Facebook page, was among several residents who say there have been a few maintenance issues such as: fire alarms going off, ice and water forming in covered parking sports, pet waste on the trails. But, essentially, those interviewed are pleased.

“It’s a nice mixed community. Not everyone is young – you have medium and old too,” says Pam Thomas, who relocated from Mt. Lebanon last December with her husband, Dan, and their Labrador Retriever. They are empty-nesters, with three adult children.

“The gym is fabulous. Every piece of equipment is new,” Thomas continues. “There is a nice business center, the walking paths are wonderful and it’s very pet-friendly. There’s a little of everything, and that’s nice.”

Michael Garbutt, who is originally from Seattle, has moved into 1400 Main for the second time. He works in human resources for Ikea in Robinson Township, Allegheny County, and considered numerous locations before choosing this complex again. Garbutt was disappointed he had “very limited options” there, but didn’t realize occupancy was so high.

“I’ve probably seen 50 different places in the Pittsburgh area and this stands out the most,” he says. “You can pull into the garage (and walk to your apartment) without stepping outside. I love the view. It’s out of the way, it’s in the country, yet you can get to a lot of places quickly. It’s a great place to be.”