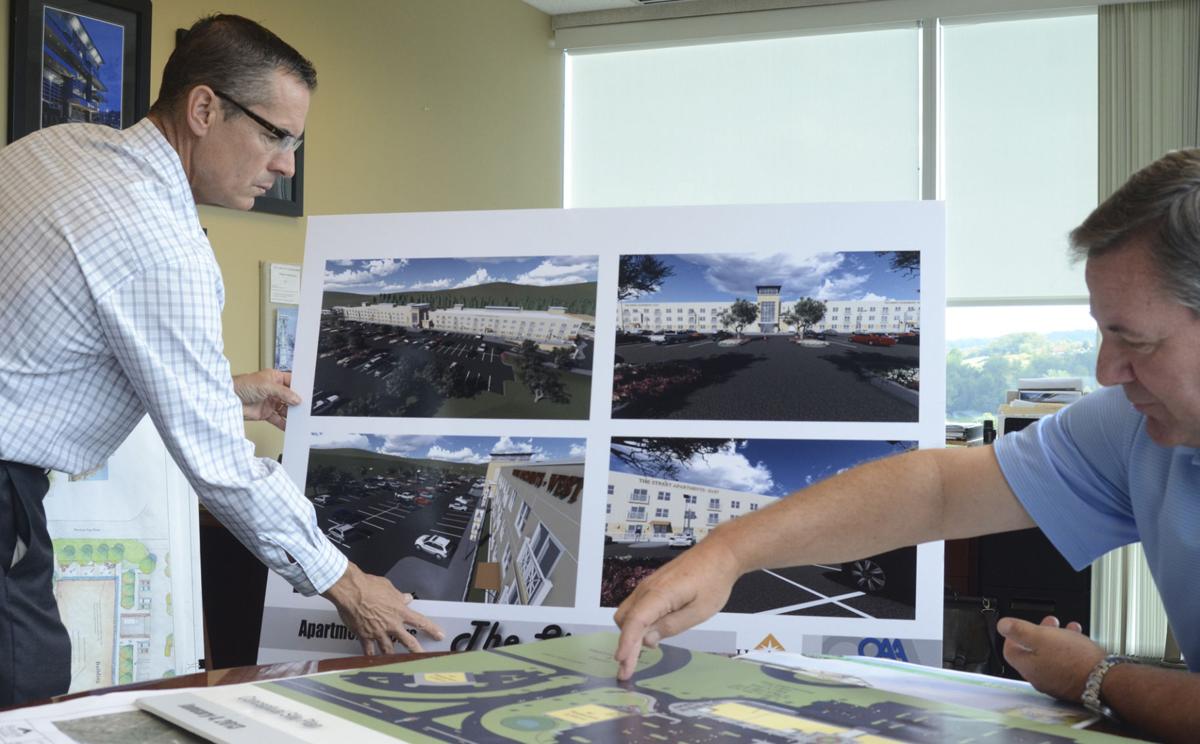 Michael Swisher, left, a principal with Horizon Properties, holds renderings of the ”Street,” another project to be built along Racetrack Road in North Strabane Township, while Rod Piatt, president of Horizon Properties, talks about the Town Center at Southpointe II. 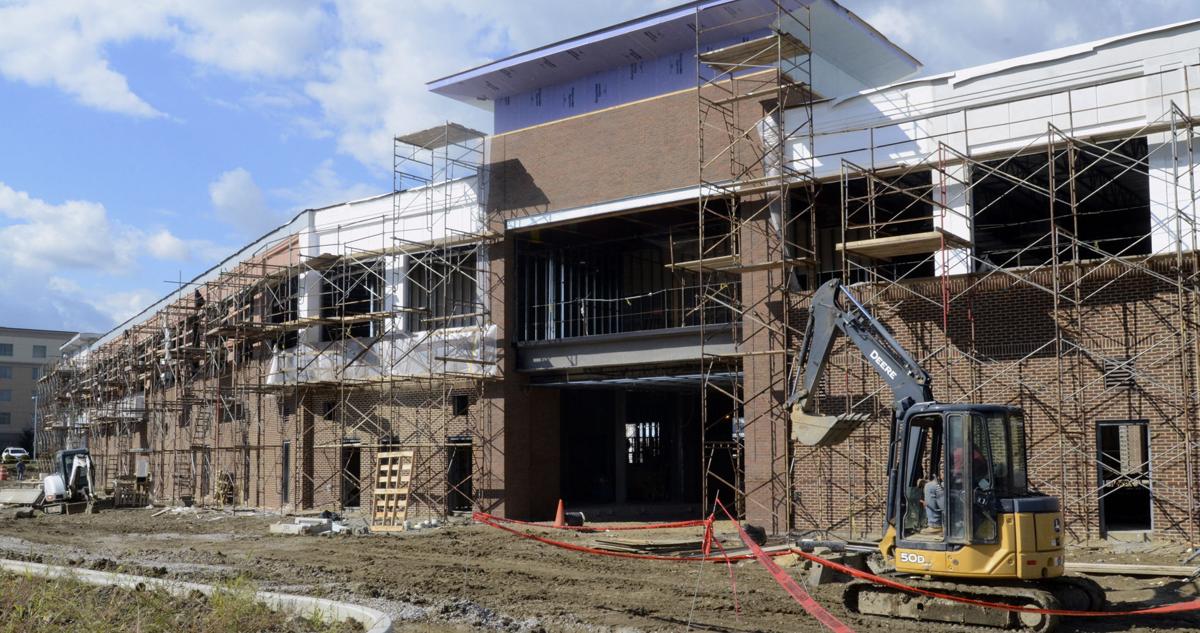 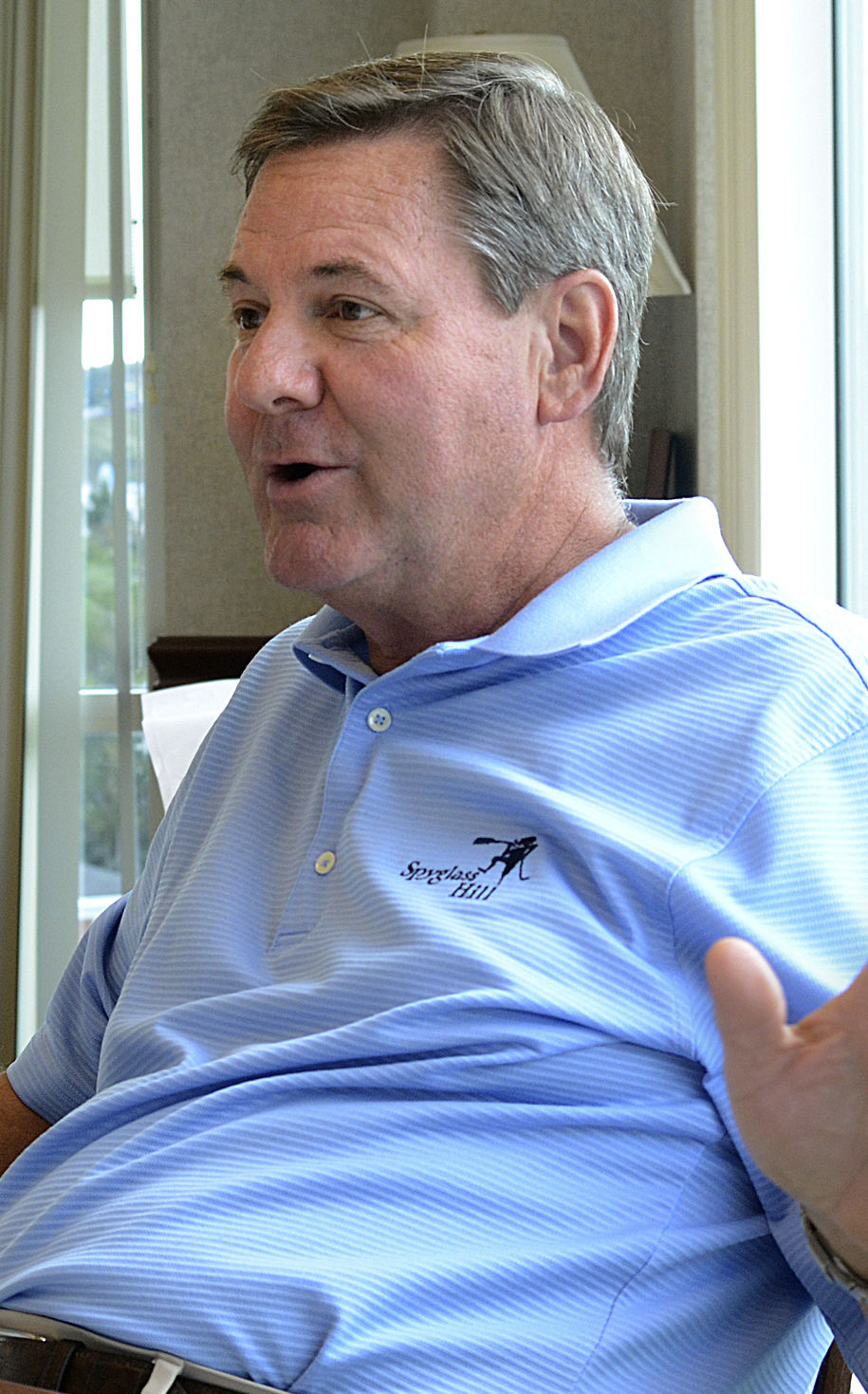 Michael Swisher, left, a principal with Horizon Properties, holds renderings of the ”Street,” another project to be built along Racetrack Road in North Strabane Township, while Rod Piatt, president of Horizon Properties, talks about the Town Center at Southpointe II.

Sometime early next spring, those who work and live in Southpointe – and even those who don’t – will have several dining and retail options to explore at the new Town Center in Southpointe II.

A long time in the making, the center will anchor a 34-acre development with two 60,000-square-foot, two-story buildings across from each other bisected by Main Street that will connect the roundabout on Town Center Drive to Horizon Vue Drive. Each building will have 32,000 square feet of ground-level retail space, topped by an equal amount of second-floor office space.

The vision of Horizon Properties President Rod Piatt, the center and its surrounding projects are seen as the crowning touch to the highly successful Southpointe II development for which Horizon is the lead developer. The company broke ground on its first building in late 2005, and accelerated rapidly with the growth of the energy industry in Washington County.

Swisher said he’s “very close” to deals on a men’s haristyling shop and a dentist’s office, as well as a bistro-style cafe and an upscale steak house.

While the town center project is quickly shaping up, Swisher has another definition of what’s occurring on the 34-acre site.

“We’re building a little city here,” he said, displaying a site map that Piatt used to describe various projects that are quickly taking off in and around the town center.

He pointed out that the retail/office center is ringed by the recently completed Fletcher Industries building on Woodcliff Drive, an under-construction Holiday Inn Express and the existing Homewood Suites extended-stay hotel.

On the Town Center campus, a developer recently closed on a 350-unit apartment building that should start construction soon.

In fact, Swisher said, within the next month, construction will launch on a WesBanco bank branch; a 207,000-square-foot office building with a parking structure expected to be occupied by a publicly traded company taking three to four floors. Another Fortune 500 company is leasing two of the three floors of another 60,000-square-foot office building that will include a fitness center on the ground floor.

The other big project on the 34 acres is Mylan Inc.’s new, 280,000-square-foot office building, which is nearing completion.

Just beyond the Mylan building and just off the Town Center campus is the new headquarters for Ansys Inc., which recently began construction for the 186,000-square-foot structure and is part of developer Burns & Scalo’s three-building Zenith Ridge project.

In addition to the Ansys headquarters building, two identical 150,000-square-foot buildings will comprise Zenith Ridge 2, a multi-tenant building and Zenith Ridge 3, envisioned as a single-tenant site.

Piatt and Swisher said all of the new construction will yield thousands of workers who will join about 500 people working at Consol Energy’s headquarters and another 300 to 400 at Range Resources’ regional headquarters, as well as other existing office buildings, creating strong demand for the Town Center’s offerings.

The two men estimated that around 10,000 now work in the entire Southpointe development, but that the new construction will push that number even higher, to as many as 12,000 when the plan is completely built out.

Piatt stressed that Town Center also will be a magnet for those living at Southpointe’s Ironwood development and its townhome and apartment complexes, as well as several new home communities now planned or under construction on land adjacent to Southpointe.

“It’s not just Southpointe,” Piatt said. “It’s the 1,000 acres around Southpointe that impacts what happens in Southpointe.”

Swisher said it’s expected that the Town Center’s prime times will be between 11:30 a.m. and 1:30 p.m. daily and throughout weekends, when those living outside the business park are expected to visit.

“Throughout Peters Township and Washington County, there’s no place to go where there is a conglomeration of restaurants” within walking distance of each other, Swisher said, adding that the center will be a place for people to park their cars and walk to their choice of eating places.

If the Town Center is successful in drawing people from near and far, Piatt and Swisher believe they can be successful in attracting a second wave of national retailers.

In fact, they’ve set aside a remaining plot of land adjacent to the 34-acre site for just such a possibility.

“ We see a lot of positive trends for retail,” Swisher said. “We’ve made a concerted effort to slow down our leasing” in anticipation of landing some of those major retailers once the town center takes off, Swisher said.