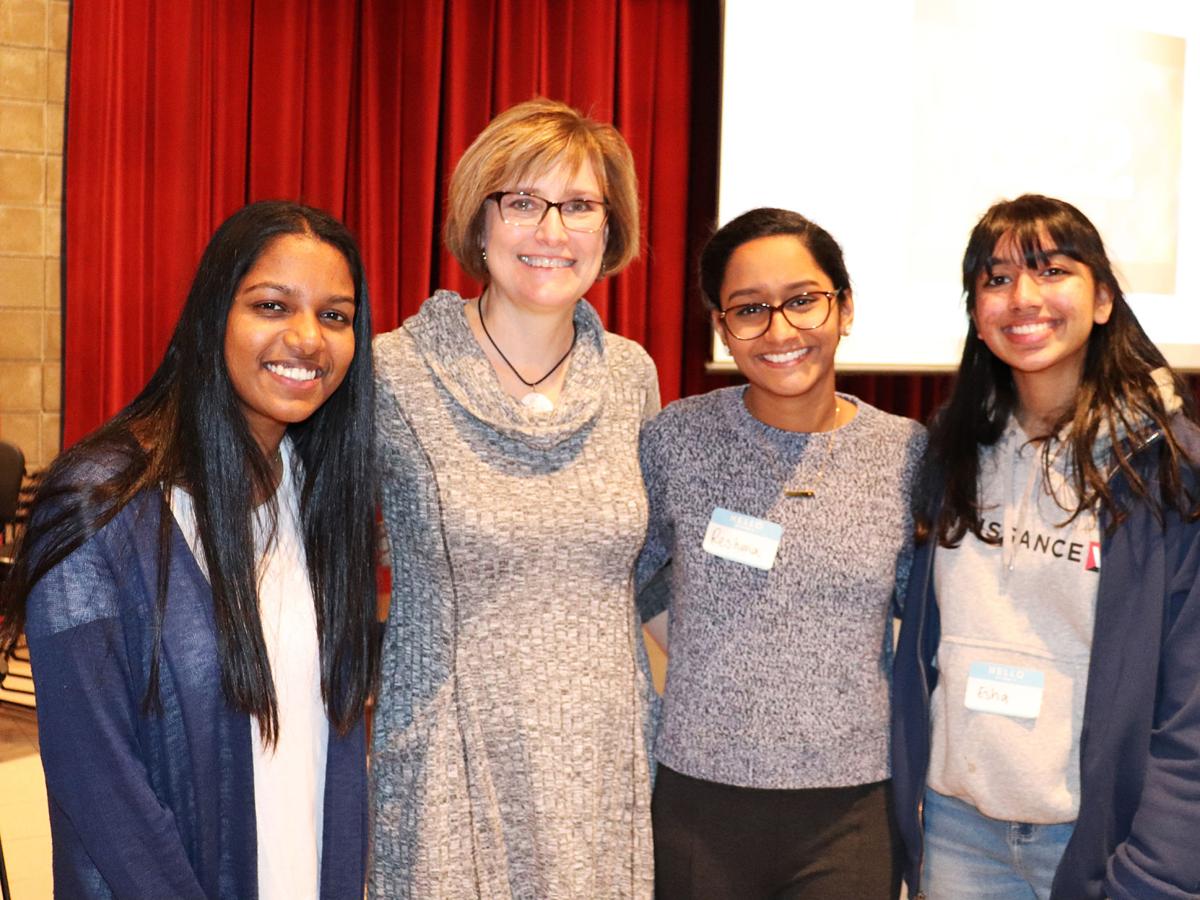 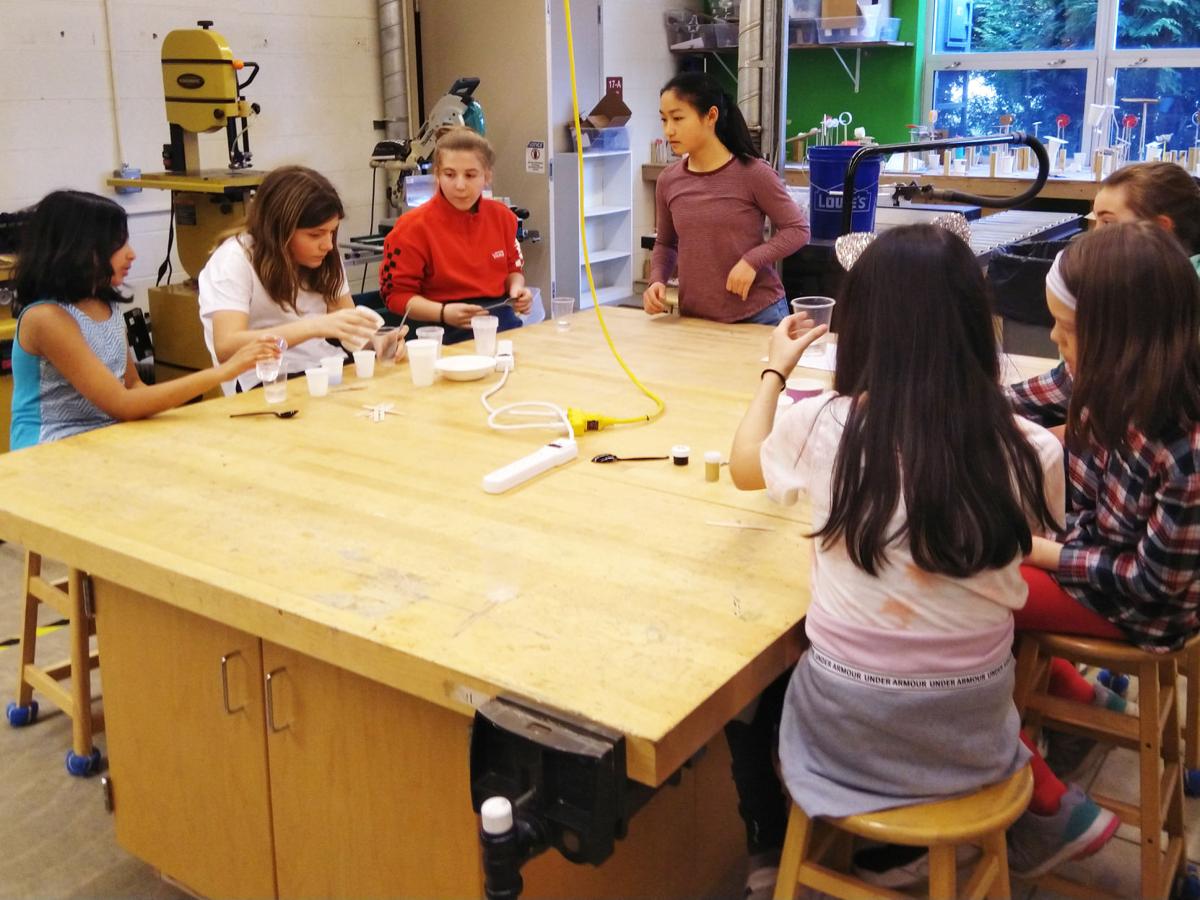 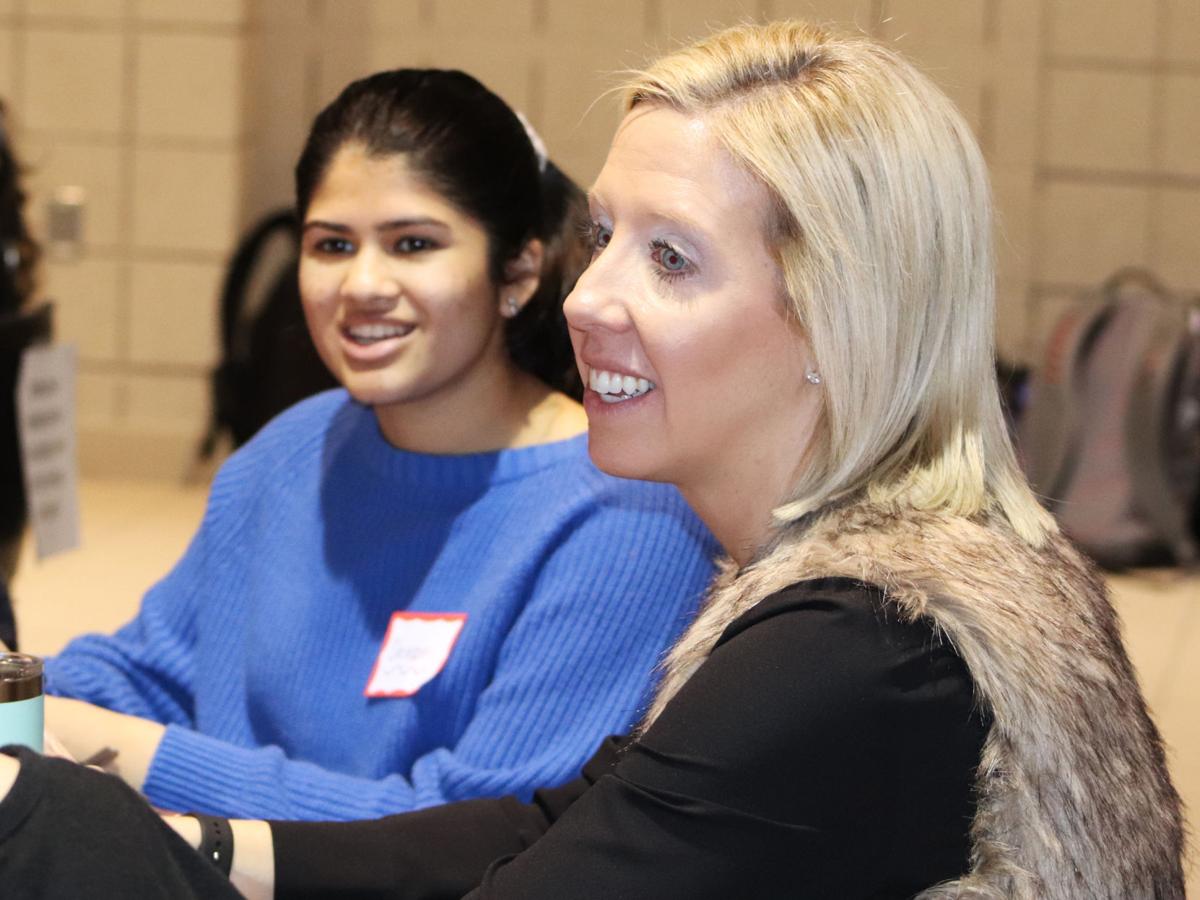 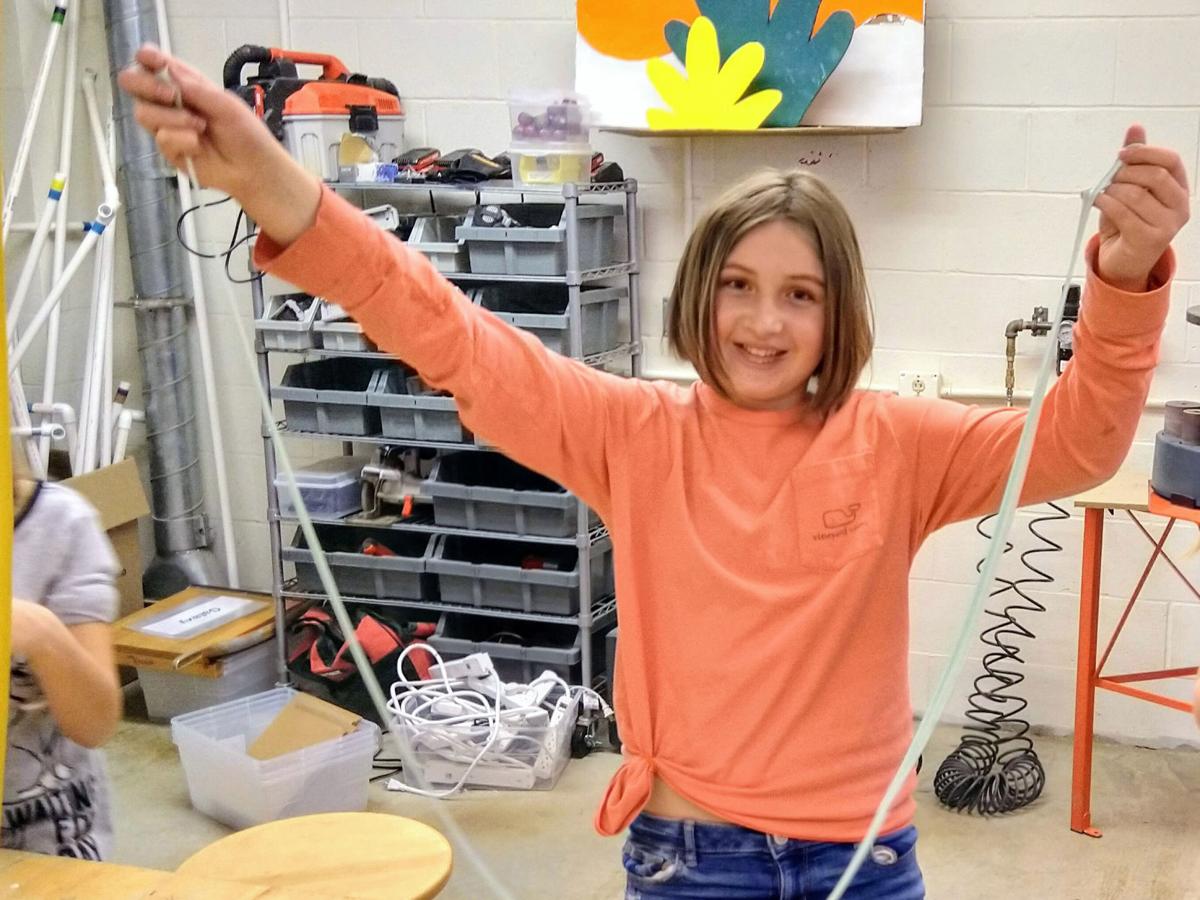 A Boyce Middle School student shows the “slime” she created during the Spark Girls Into STEM program for fifth- and sixth-graders. 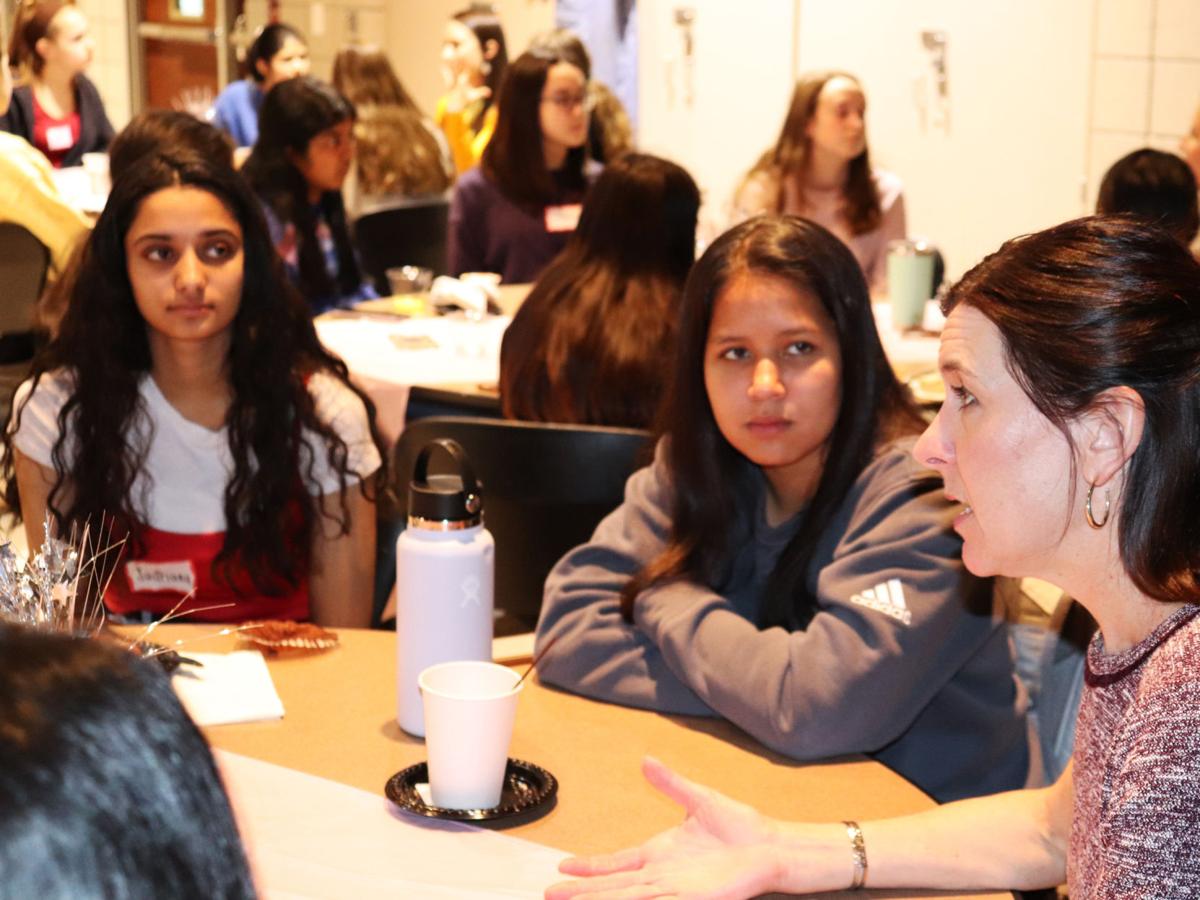 A Boyce Middle School student shows the “slime” she created during the Spark Girls Into STEM program for fifth- and sixth-graders.

During an orientation for an upcoming computer science class, Reshma Gudla quickly realized she was outnumbered, to say the least.

Her count of students gathered in the Upper St. Clair classroom showed about 40, with five of them females.

“And one girl actually dropped out,” Reshma recalls. “When you are in a class with 36 boys and three other girls you’re kind of familiar with, it’s kind of difficult at first to make friends. But you have to get over that.”

While she didn’t worry too much during her sophomore year about the class’ gender disparity, Reshma started to look at American society as a whole concerning comparative percentages of men and women working in fields related to science, technology, engineering and mathematics, the STEM subjects of education.

“I realized that it’s, honestly, due to the stigma and the stereotypes that are associated with women choosing a predominantly harder career,” she says. “So, I wanted to address this problem within our own community.”

And so she founded the Spark Girls Into STEM Club at the high school, bringing together young women who are looking toward futures in male-dominated professions and would like to do their part to help level the playing field.

Among the club members is Shivani Jajoo, an aspiring doctor who found herself in course-related situations similar to Reshma’s.

“When I’d take those classes, I was one of the only girls in that class,” Shivani says. “Personally, I was very interested in them. But I think one of the reasons a lot of people didn’t take them is because they wouldn’t have their friends there, or there wouldn’t be other girls there to support them.”

A prime objective of Spark Girls Into STEM certainly is for members to support one another. They also have tapped into the high school faculty to help the cause, including Advanced Placement biology teacher Dawn Mostowy and mathematics curriculum leader Steve Miller, who serve as club sponsors.

Just before the school closing because of COVID-19, club officers – vice president Prathiksha Sivakumar, secretary Esha Lahoti and president Reshma – drew other teachers in by organizing a breakfast during which students could learn all about their instructors’ backgrounds.

“I think they had the unique opportunity to hear, in this case, from eight females in our building who gave them insights to the wide variety of paths that you can travel upon as you’re exploring your own particular science career,” Mostowy says.

Hers began at Johns Hopkins Hospital in Baltimore, where she researched cystic fibrosis for two years. She came to Pittsburgh to work for Bayer Corp., and while doing so, decided what she really wanted to do was teach.

“My path took all these different twists and turns, and when we listened to the stories of the other seven teachers, it was very similar in many cases,” she says about the breakfast. “There were a lot of women who had really done a bunch of other things before teaching as a career.”

“That was a really interesting and eye-opening experience for me, especially because a lot of our teachers at Upper St. Clair are so experienced and they have so many different things they’ve done in their STEM careers,” Jasmine says. “Hearing that really inspired me and made me want to do STEM even more in the future.”

In addition to the breakfast, club members also launched an educational program at Boyce Middle School, with the older students serving as mentors for fifth- and sixth-graders.

“Our aim isn’t just targeting high school girls,” club secretary Esha says. “It’s targeting all girls – the younger, the better – because the earlier they start, the more exposed they are to STEM.”

The club managed to have an initial session at Boyce in what was supposed to be a four-week program.

“The whole purpose of it was for the kids to go on a science fair journey, where they came up with their own research questions, their own hypotheses, and also present their results to the large group,” Reshma explains. “It’s kind of helpful with public speaking skills, but they’re also talking about something they’re passionate about.

Spark Girls Into STEM members have found working with the younger students to be enjoyable.

“I think it’s really fun, because they have a lot of energy, and they’re not thinking about the work aspect right now,” member Anjali Vishwakarma says, as their focus is on the activities they do and how they relate to STEM subjects.

For vice president Prathiksha – a high school senior with one sibling, a toddler brother – the Boyce experience represents quite the change of pace.

“I haven’t exactly grown up with that kind of age of children, so I was kind of nervous to go back because I had no idea what to expect,” she says. “And I don’t want to say I underestimated them, but they were amazing. You could just see how interested they were and how much they thought about what we were doing.”

“From a young age, I’ve always been interested in medicine, and I was pretty set on becoming a doctor. As I grew up, especially my junior and senior years, I kind of realized that I was a bit too narrow-minded about what I wanted to do,” she explains. “That’s kind of what drew me to STEM, in general. I wanted to explore what other careers I could possibly do.

“And honestly, I’m still pretty set on medicine. I haven’t really changed my mind about that. But it’s definitely taught me that all of those fields are interconnected in a way.”

For Reshma, the combined study of science, technology, engineering and mathematics serves as a doorway to changing the world for the better.

“It really just challenges you to think outside the box and improve the things around you. STEM is going to be in our everyday lives. It already is, like with our smartphones or with the medications we take to be healthy,” she says. “To me, the idea that I can possibly come up with the solutions to problems surrounding that is pretty cool, and I hope to pursue this in college, as well.”