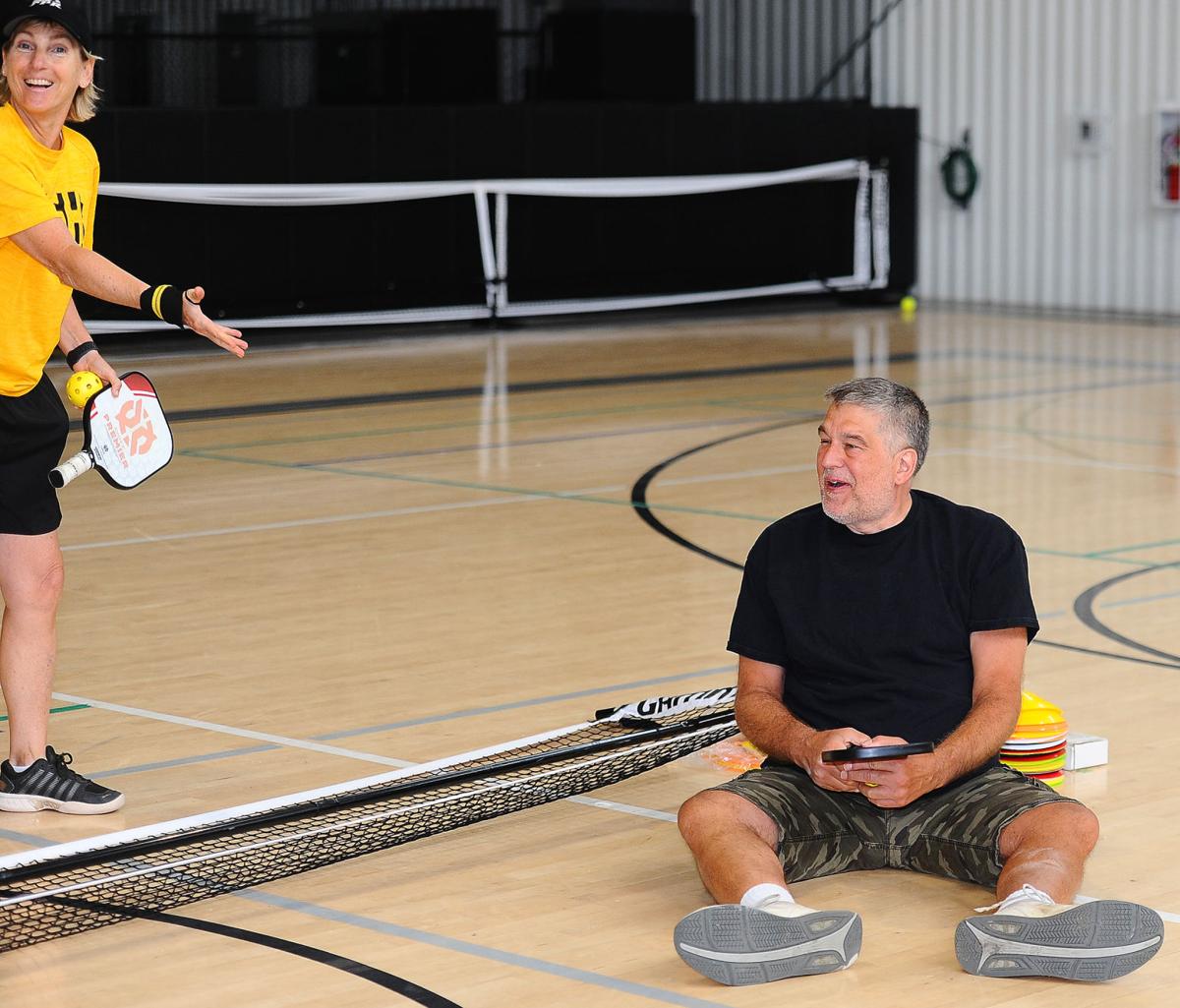 After the spill, no worse for the wear 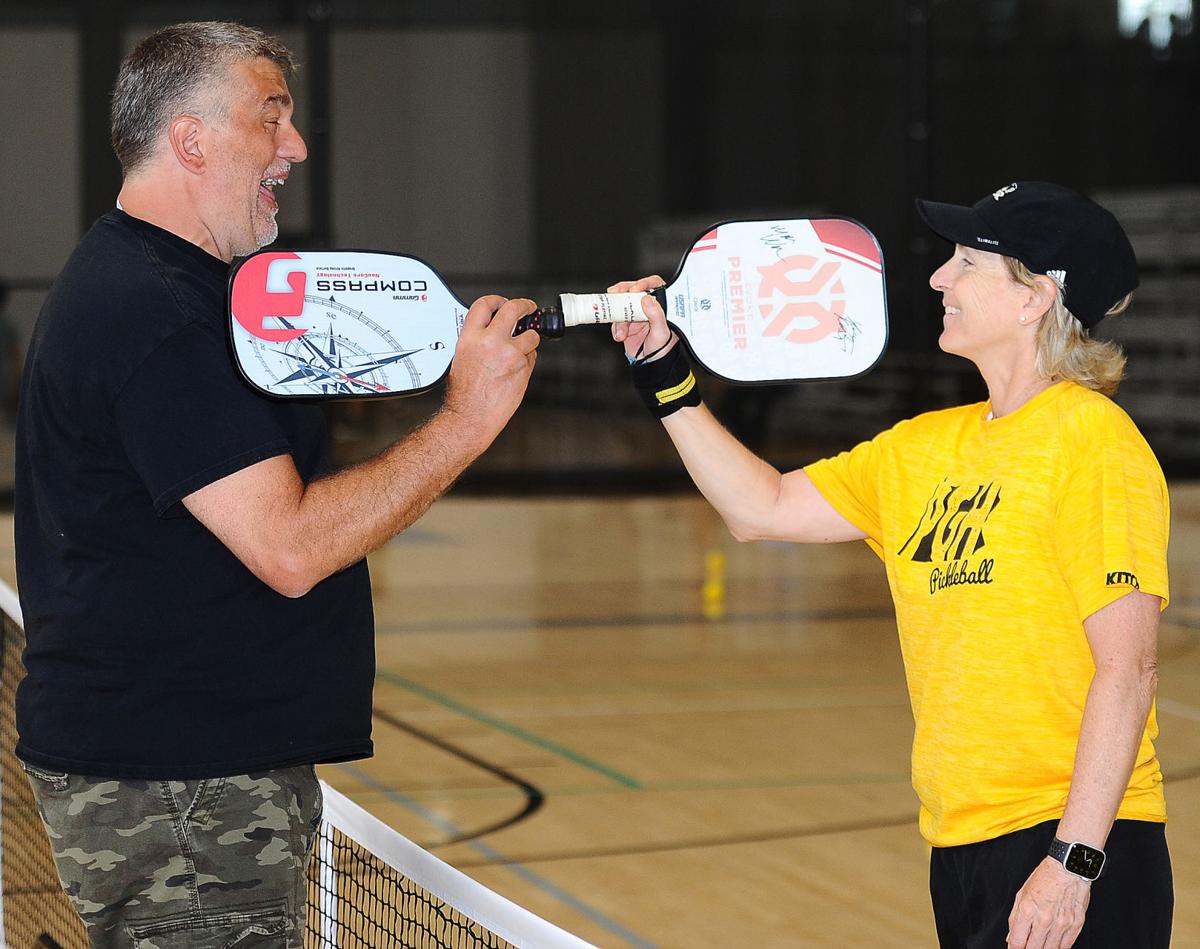 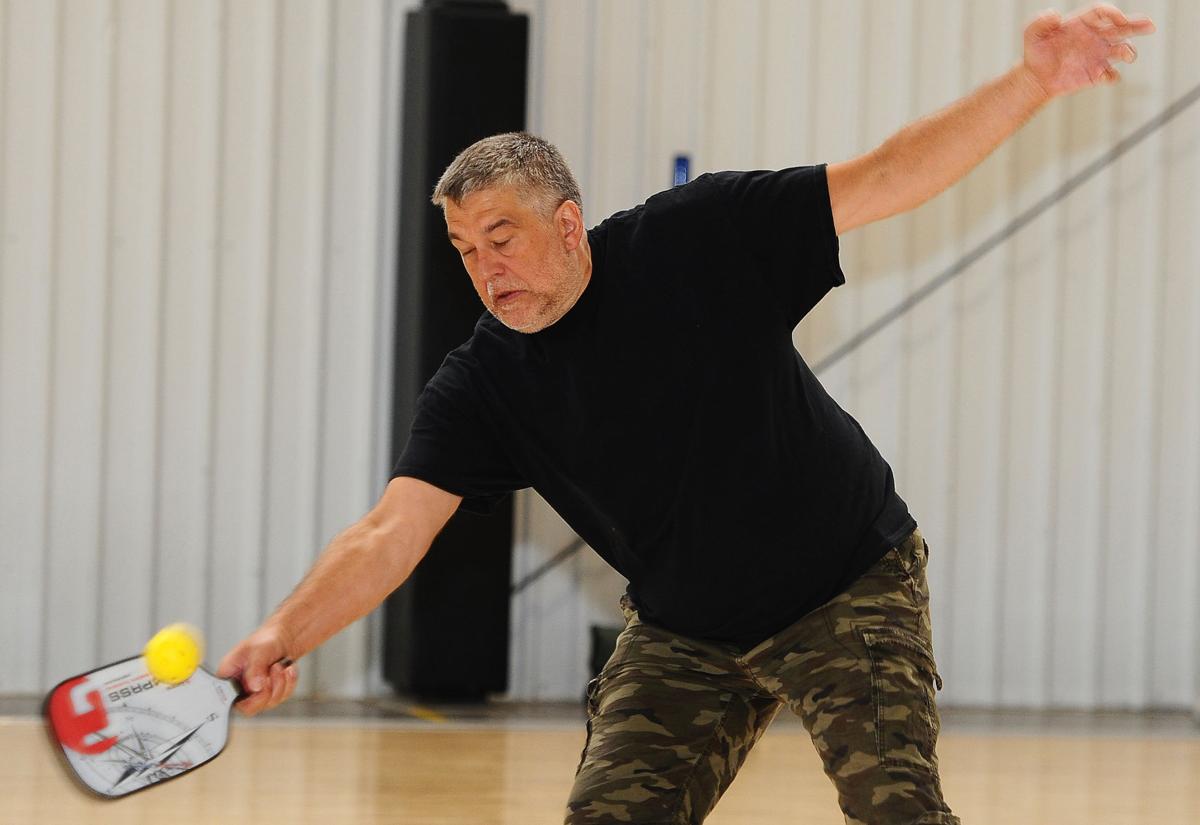 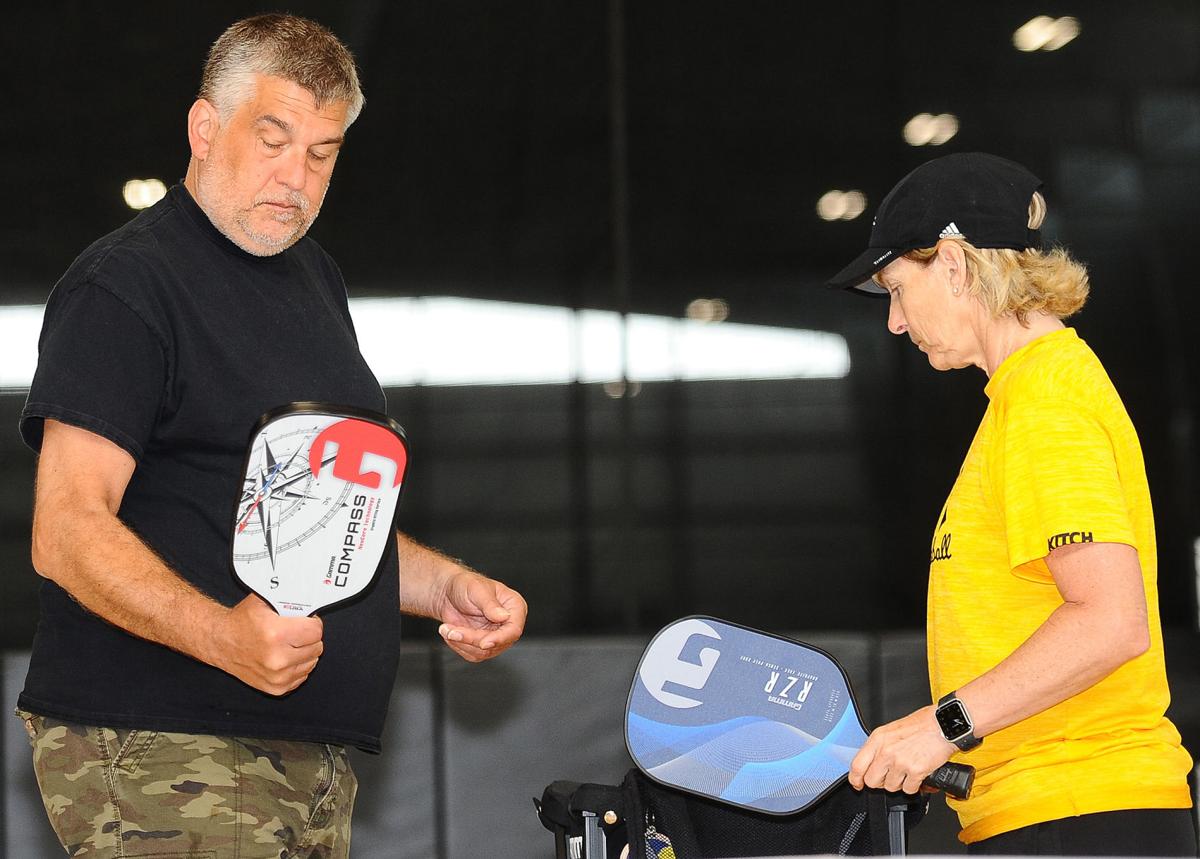 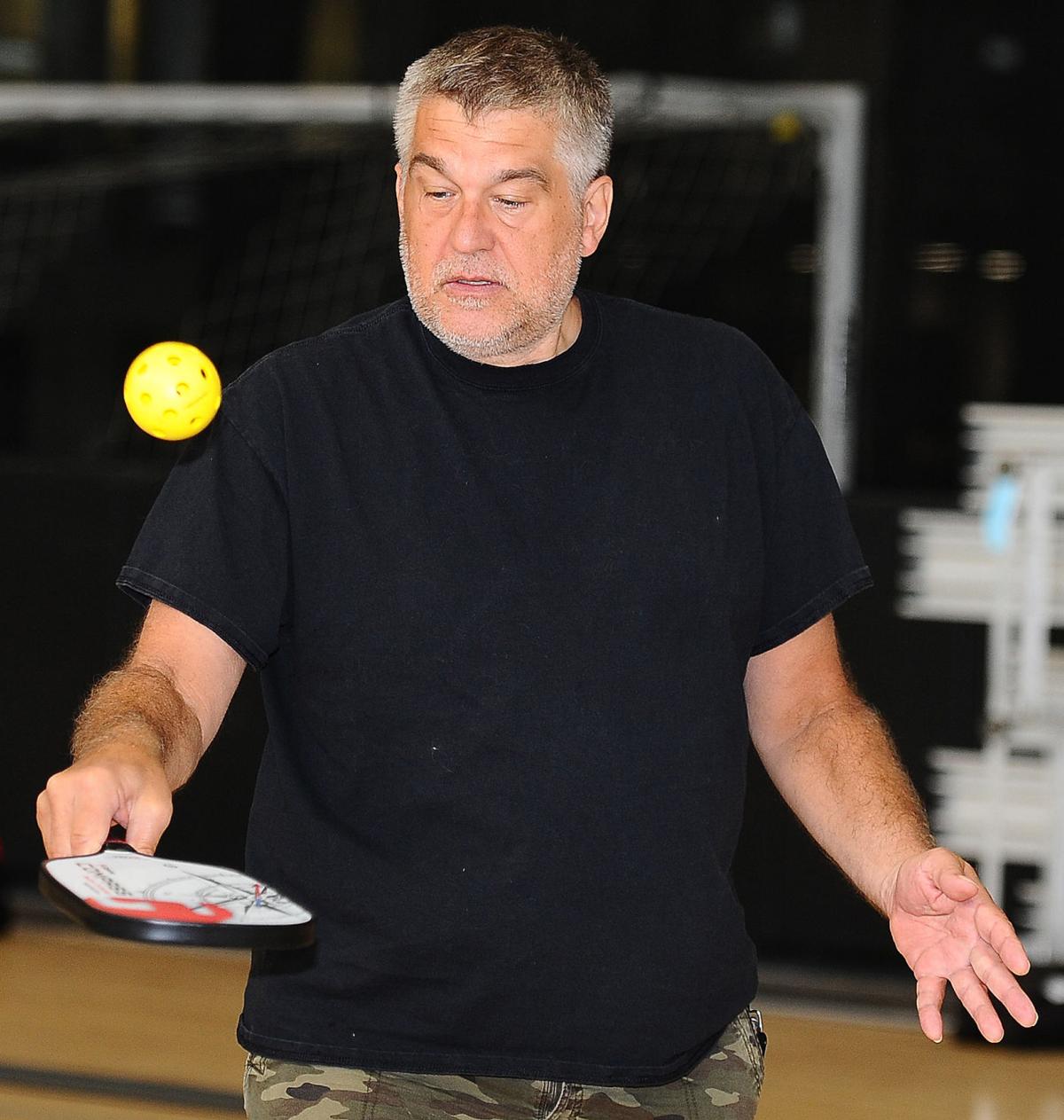 Getting the feel of the paddle 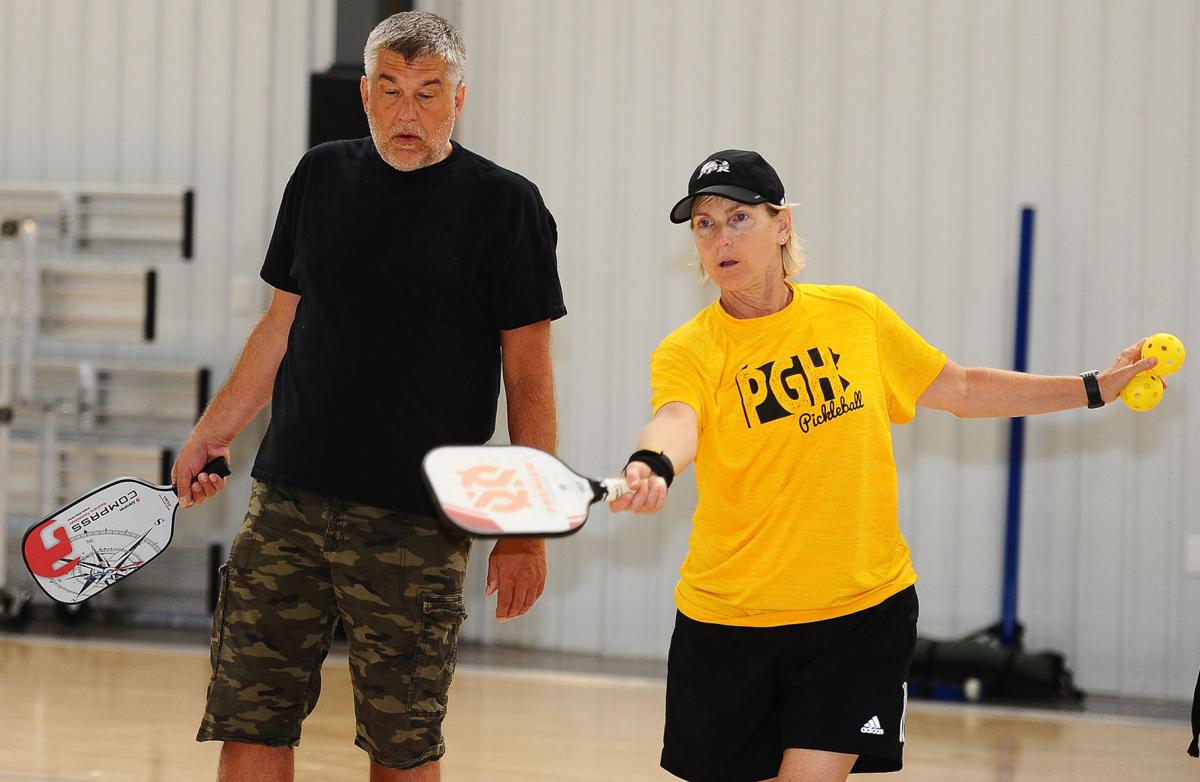 Certified instructor Laurel Heilman explains some of the intricacies of pickleball. 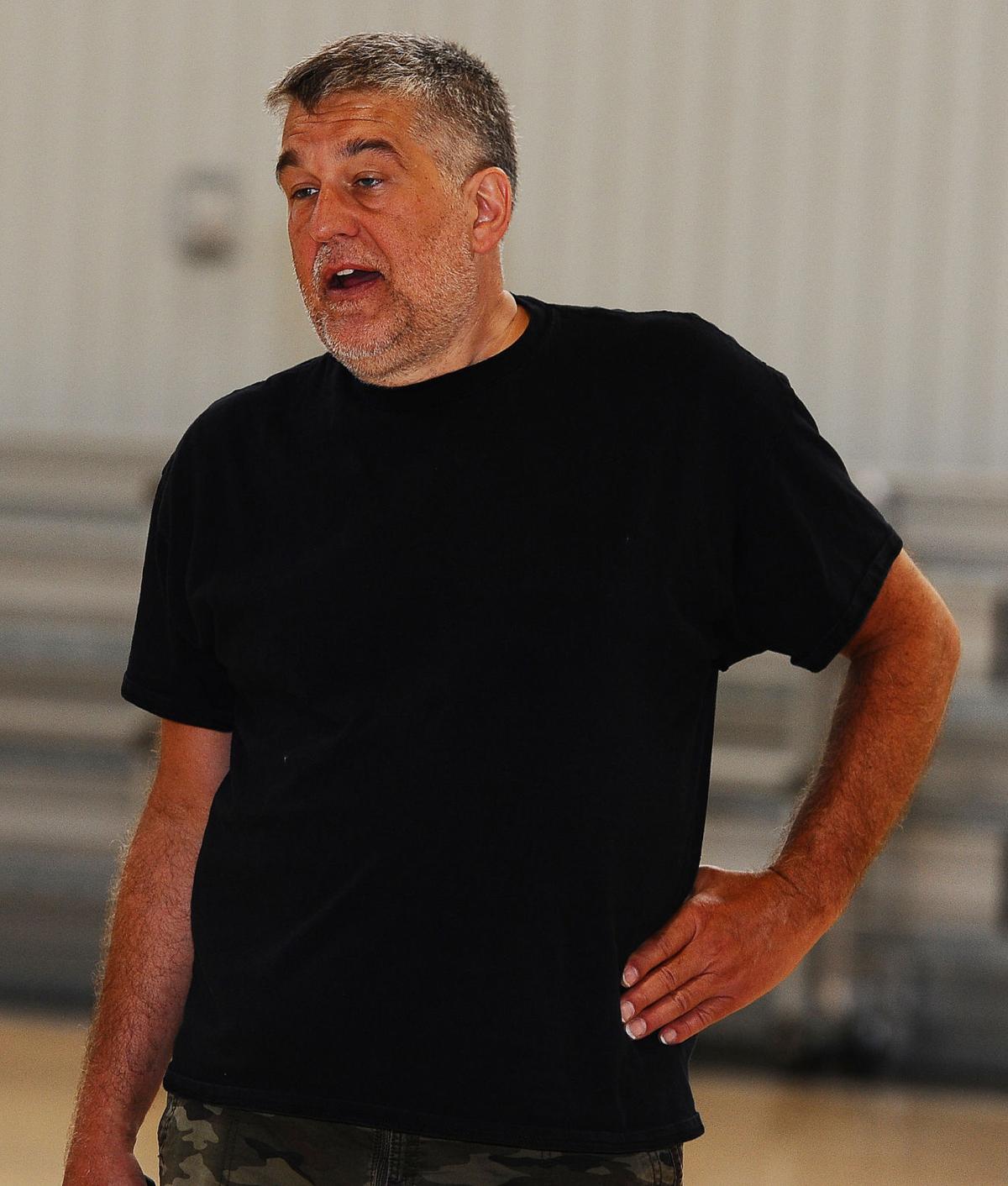 Looks like it may be time for a break. 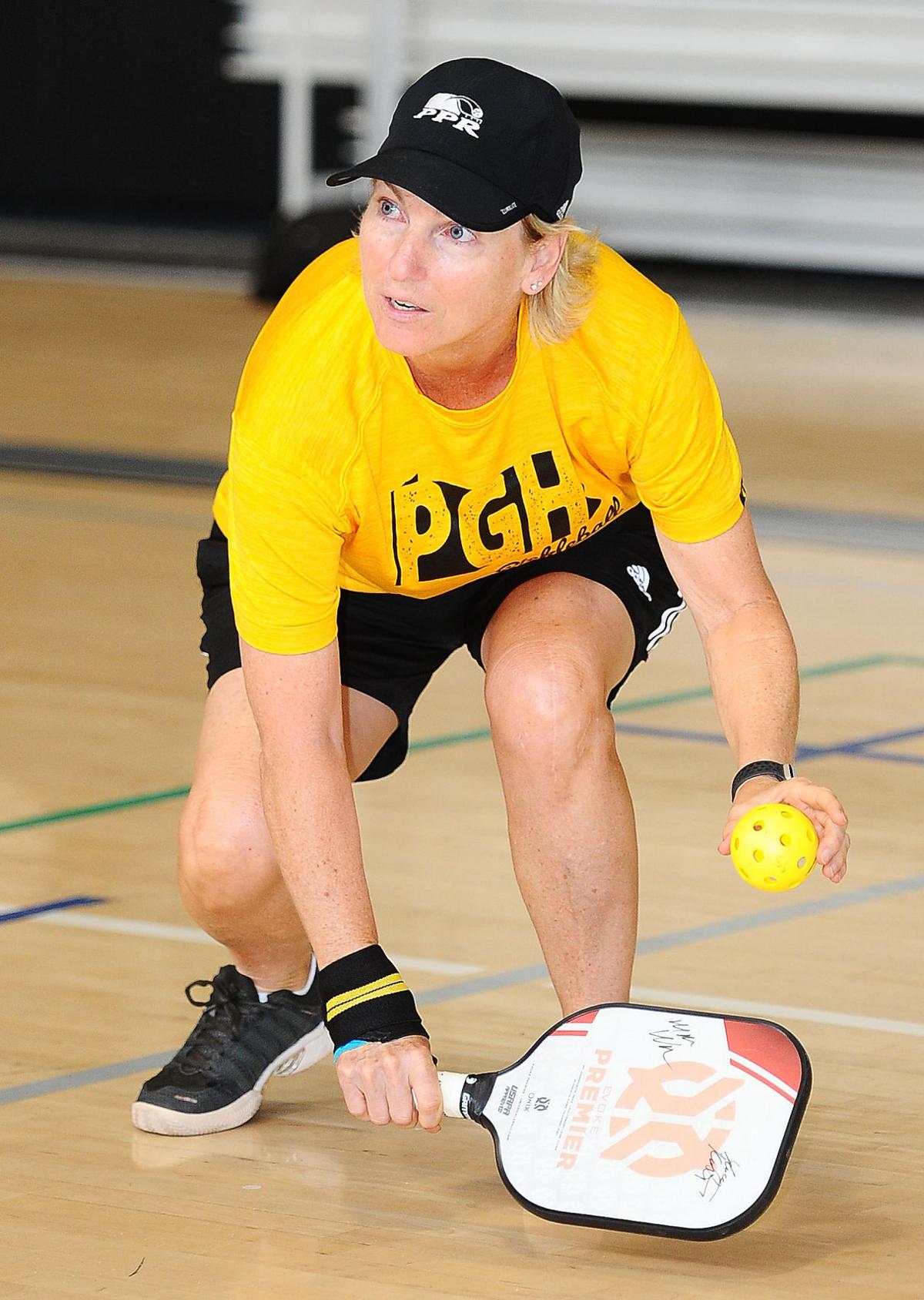 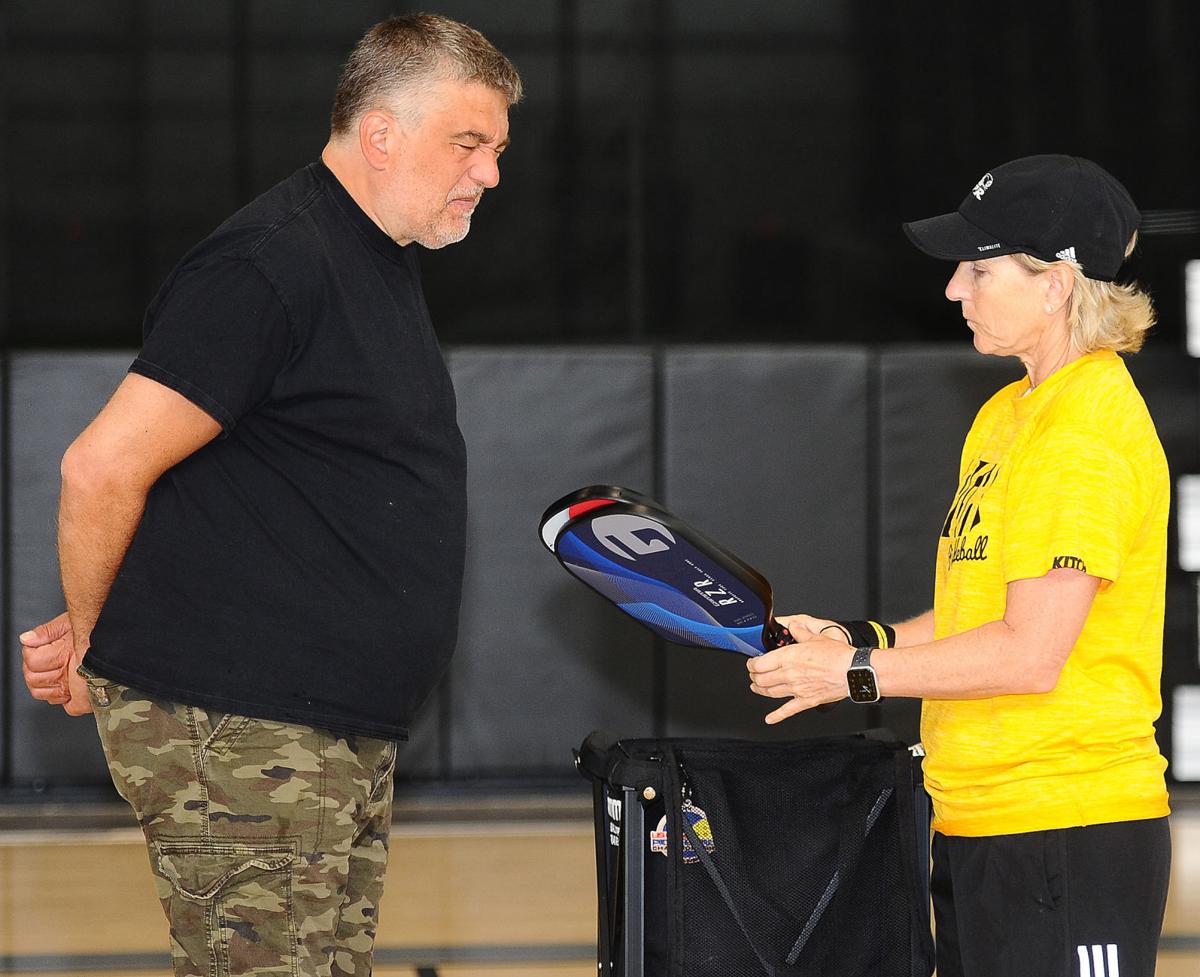 "This sounds as though it involves some moving around ..." 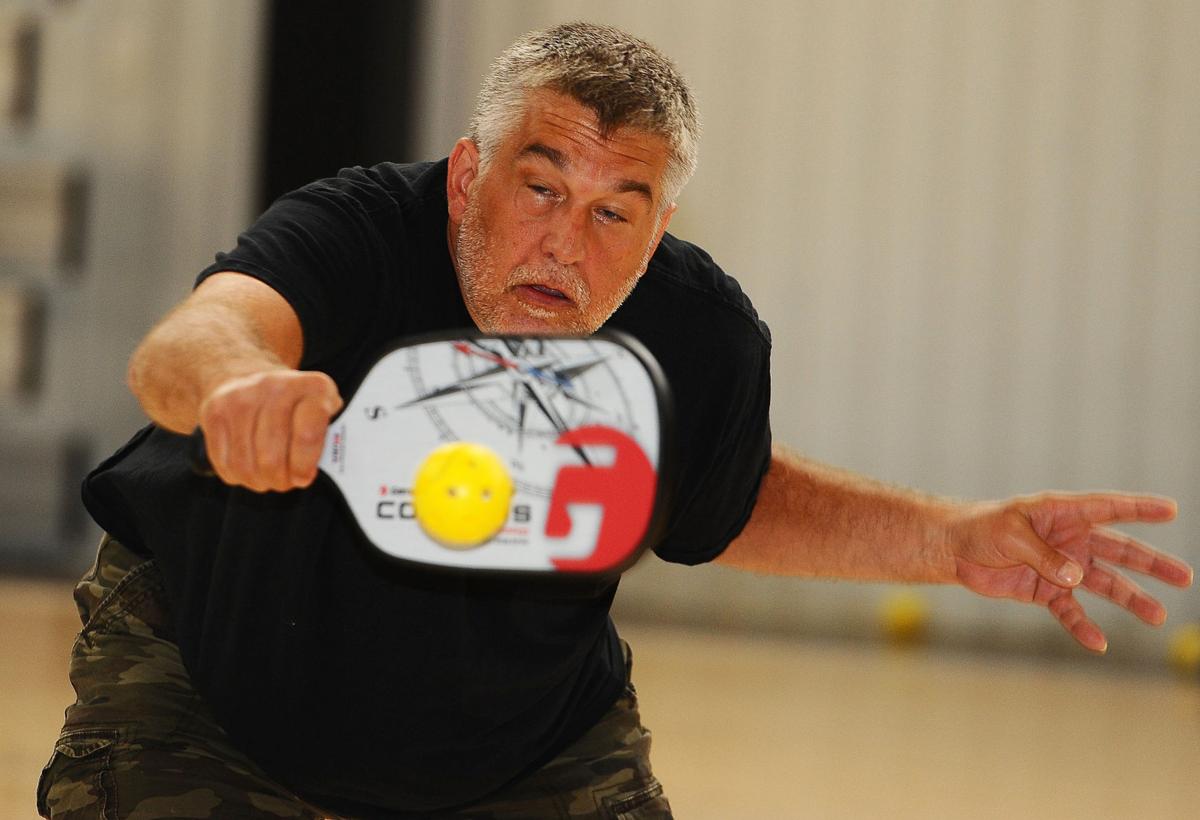 Concentration helps get that ball over the net. 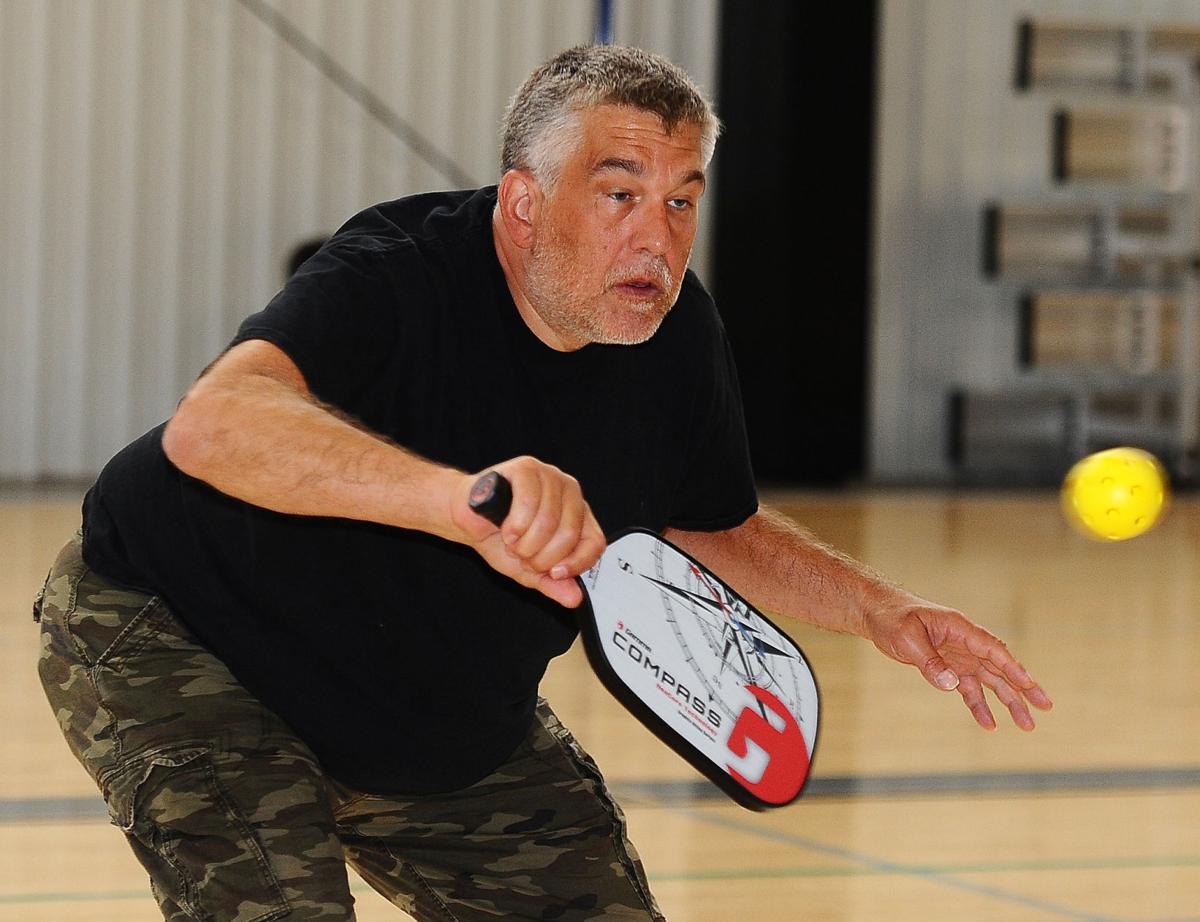 Keeping the eyes on the prize

Getting the hang of it

After the spill, no worse for the wear

Getting the feel of the paddle

Certified instructor Laurel Heilman explains some of the intricacies of pickleball.

Looks like it may be time for a break.

"This sounds as though it involves some moving around ..."

Concentration helps get that ball over the net.

Keeping the eyes on the prize

Getting the hang of it

Pickleball, alas, does not involve an actual pickle.

But according to the sport’s origin story, it does involve a Pickles.

“In 1965 in the state of Washington, there was a family on vacation,” certified pickleball instructor Laurel Heilman tells me. “The kids were bored. They invented this game. They invented the rules, just to try to keep the kids active.”

As for the name:

“They had a dog named Pickles that kept going after the balls.”

I certainly hadn’t known that. And before meeting Laurel, I didn’t have much of an idea about what pickleball might be all about, other than the people who play it tend to rave about it.

Laurel admits she had been in the dark, too, before learning that her 88-year-old father, Rege, was an enthusiast. Her reaction when seeing him on the court:

Since then, the former head women’s basketball coach at Slippery Rock University and three-sport athlete at Bethel Park High School has been focusing on the intricacies of pickleball. She offers lessons inside the Cool Springs complex, and I’m about to take one.

“It was considered, or known to be, an elderly type sport, for the 55-and-up crowd,” she says, and I nod as part of that particular demographic.

But these days, youngsters are learning how to play in gym class.

“There are pros now are earning a living playing pickleball, teaching at their own academies, traveling doing destination camps, in their 20s,” Laurel explains. “So the kids in high school and junior high can see, it’s not like they’re in their 80s. They’re 20-year-old pros.”

Yes, pickleball definitely has a place on the sporting map, and it hasn’t happened overnight. The governing body USA Pickleball Association, for example, has available for download a 73-page rulebook, and it was first published back in 1984.

Thirty-six years later, I’m standing on a court at Cool Springs as Laurel hands me a couple of pickleball paddles – they’re not racquets – from which to choose. I select one made by a company called GAMMA Sports, located right here in Pittsburgh.

She gives me the Cliff’s Notes version of those dozens of pages of rules, and what emerges in my mind is a cross between tennis and ping-pong, with a bit of badminton, all of which I frequently played when I was young. Just not very well.

So I’m not anticipating a scintillating performance on the court with Laurel. And early on, much to her bemusement, I lunge at the ball and crash into the net, knocking it down and winding up sprawled on the floor in the process.

Nothing’s broken, so I get up and continue. And I start kind of getting the hang of it, judging from Laurel saying, “Good” here and there. I’m hitting the ball. It’s going over the net and landing inbounds. I’m not falling down anymore.

After a few minutes, though, I’m huffing and puffing and wheezing, while Laurel hasn’t even remotely broken a sweat. And I think about Rege Heilman, who played until he was 90.

Boy, I need to get myself into better shape.

Pickleball just may be the key. In fact, Laurel says she’d like to see me out there on the court in the future, drawing on what I’ve learned from her.

My big takeaway is that I understand why so many people are so gung-ho. Despite working on what I know will be tomorrow’s aches and pains, I’m having a lot of fun.

And that, if the pooch Pickles will pardon the expression, is the name of the game.