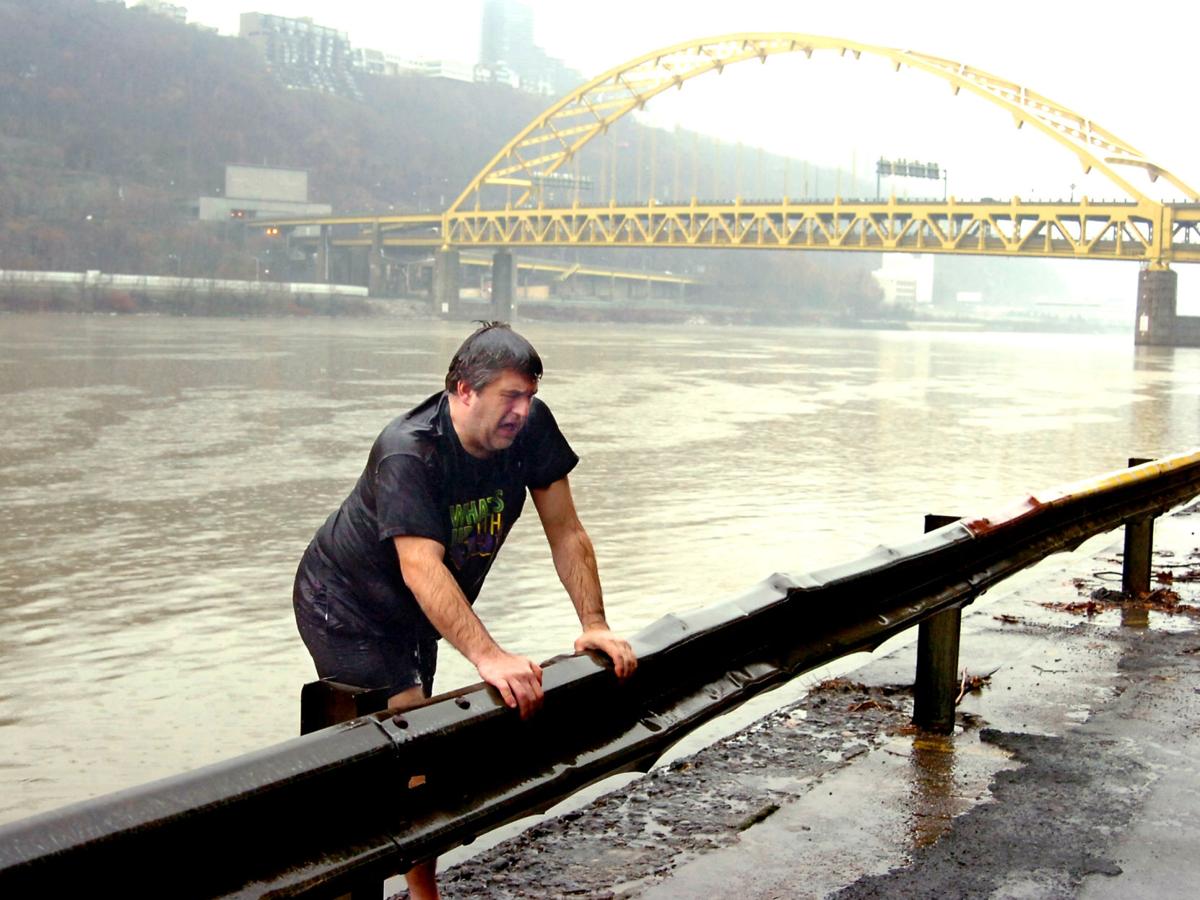 Harry Funk does the 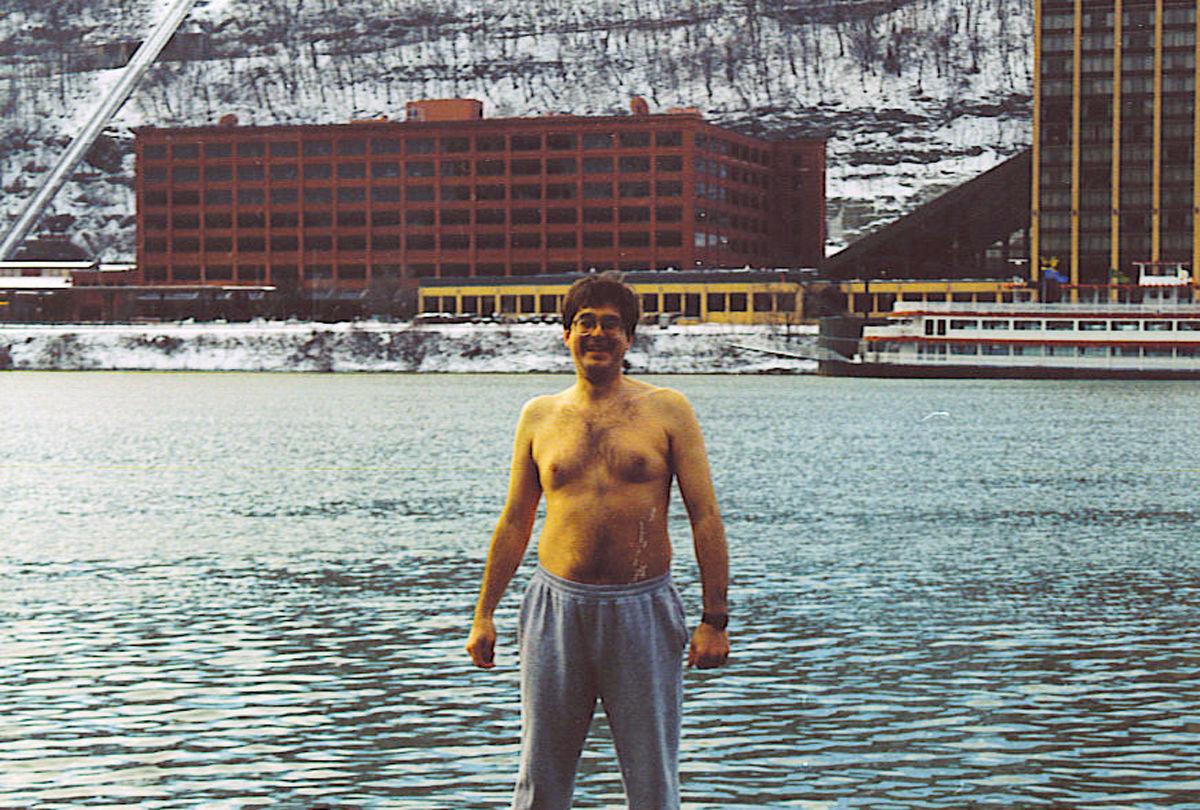 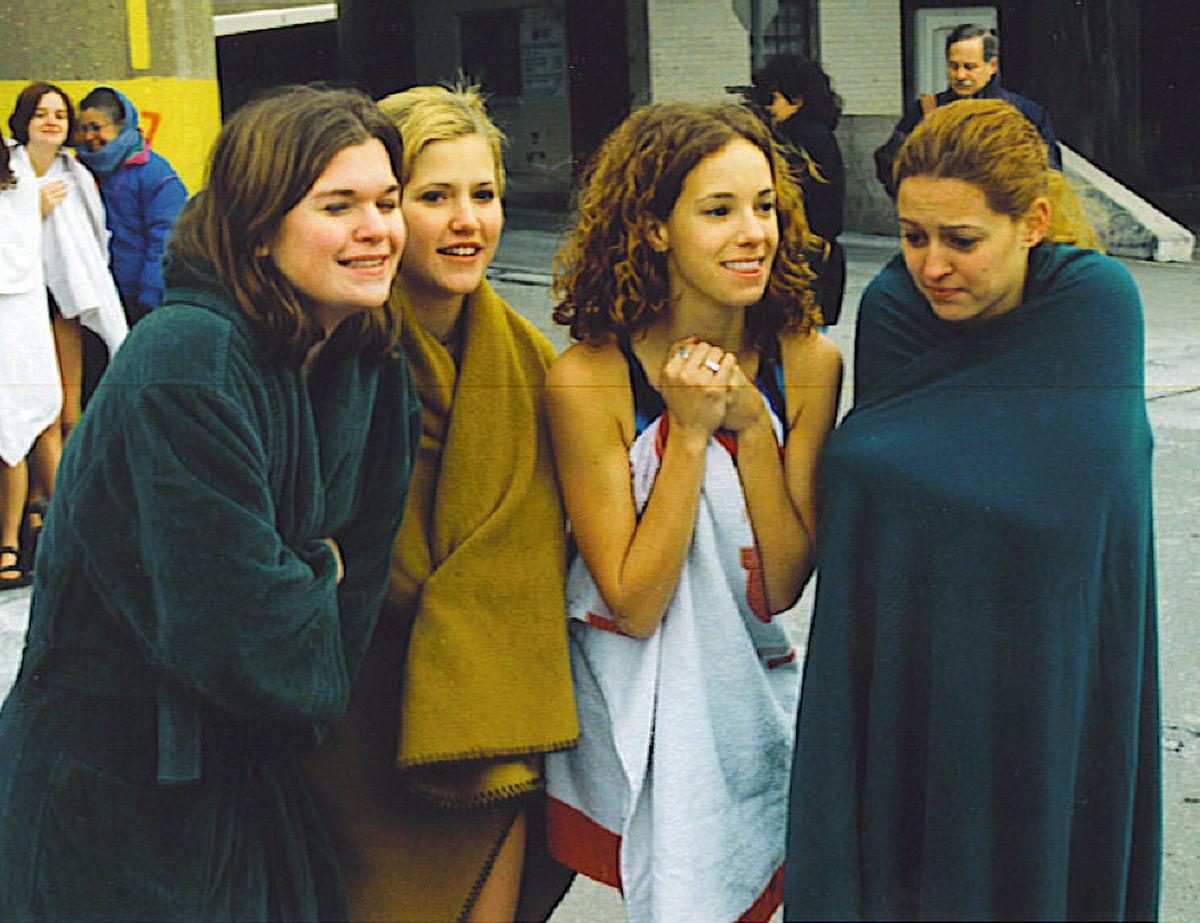 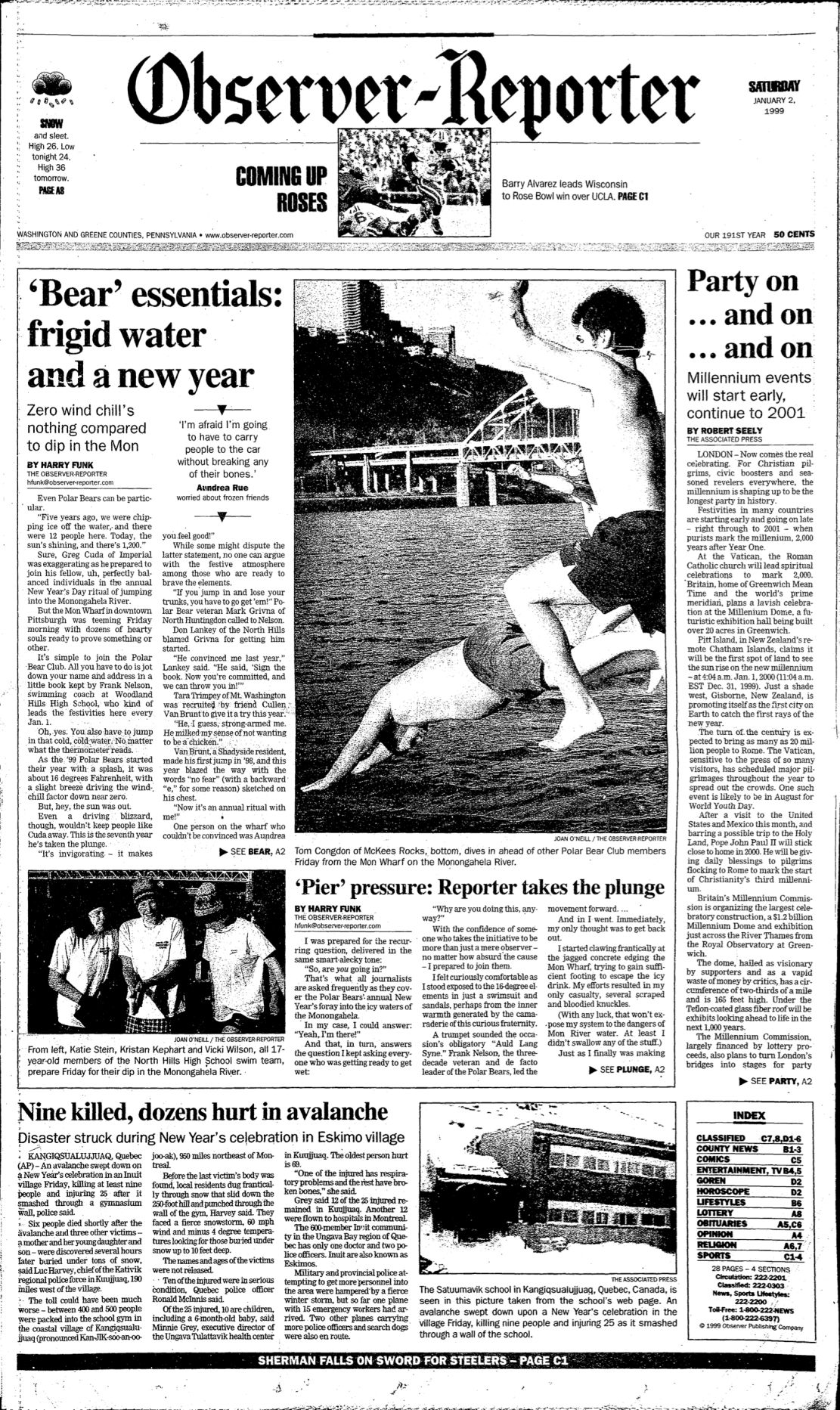 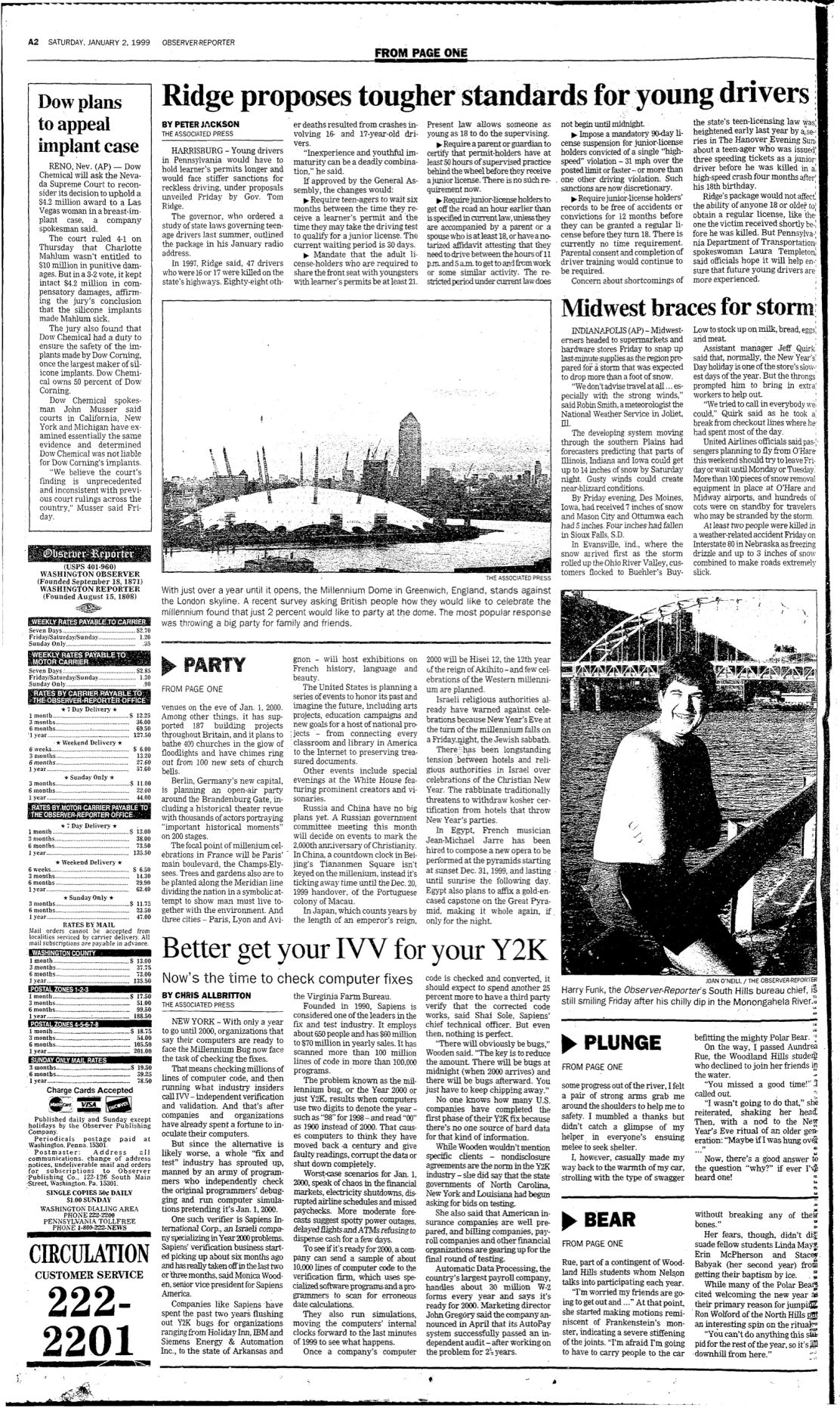 Harry Funk does the

It wasn’t quite a triple-dog dare, but close enough for jazz.

Back in the waning days of the 20th century, a high school swimming coach named Frank Nelson called the newspaper company I was working for at the time to tell about members of his team joining him for a swim.

In the Monongahela River. On New Year’s Day.

He told me what would make it even better:

It turns out that Frank was president of the Pittsburgh Polar Bear Club, members of which had been braving the Jan. 1 elements since the mid-’60s. And that was the sole criterion. Jump into the Mon, and you were in like Flynn.

And so I ventured to the Mon Wharf on an exceptionally chilly morning, ready to prove my mettle.

I remember Frank’s students standing around wrapped in blankets, waiting for the 9:30 plunge. I remember a guy dressed like Baby New Year, dressed in nothing much besides a sash, and what I hoped wasn’t a diaper.

And I remember thinking that, no matter what, make sure not to swallow any of that river water.

At the appointed time, I joined all the adventurous souls who were making the jump. Next thing I knew, my head was underwater. And as if you wouldn’t have guessed otherwise, some of those Mon molecules made their way down my throat.

Somehow, I survived until the following year, and again I decided to go full Polar Bear. This time, I had a photographer in tow to chronicle the, uh, adventure.

As far as I could tell at the time, I was the first of the plungers to get the heck out of the drink. And one of the photos I saw the next day pretty much proved it.

The tradition of visiting the Mon Wharf on Jan. 1 continued for a few years, but it tailed off once I reached my 40s. People that age, I reasoned, are susceptible enough to getting sick, even if they don’t swallow river water. Why should I push my luck?

Then at a Christmas party one year, my friend Mike’s wife, Cecily, said she wanted to give it a try and asked if I’d show her the ropes. Mike said he’d bundle up and watch.

So I accompanied Cecily, her sister and her niece to the festivities. At 9:30, her sister, niece and I jumped. Cecily didn’t.

Well, we couldn’t have that. I got out of the water, convinced Cecily she was going to do it, and in we went.

As she emerged, a TV reporter interviewed her about the experience. She acknowledged my role. But when we watched the clip later, the part with my name in it had been edited out, of course.

I’m not sure how long ago that was, but it’s been many years since I even have thought about getting up early on Jan. 1 to drive to Pittsburgh and immerse myself in icy water.

The year 2020 is coming up, though. By my reckoning, that’s the start of a new decade. Why not ring it in with something special before I definitely am too old to consider doing it again?

Then again, I like to think I’ve gotten wiser as well as older in the past 20-plus years.

And when all is said and done, I always will be a Pittsburgh Polar Bear.