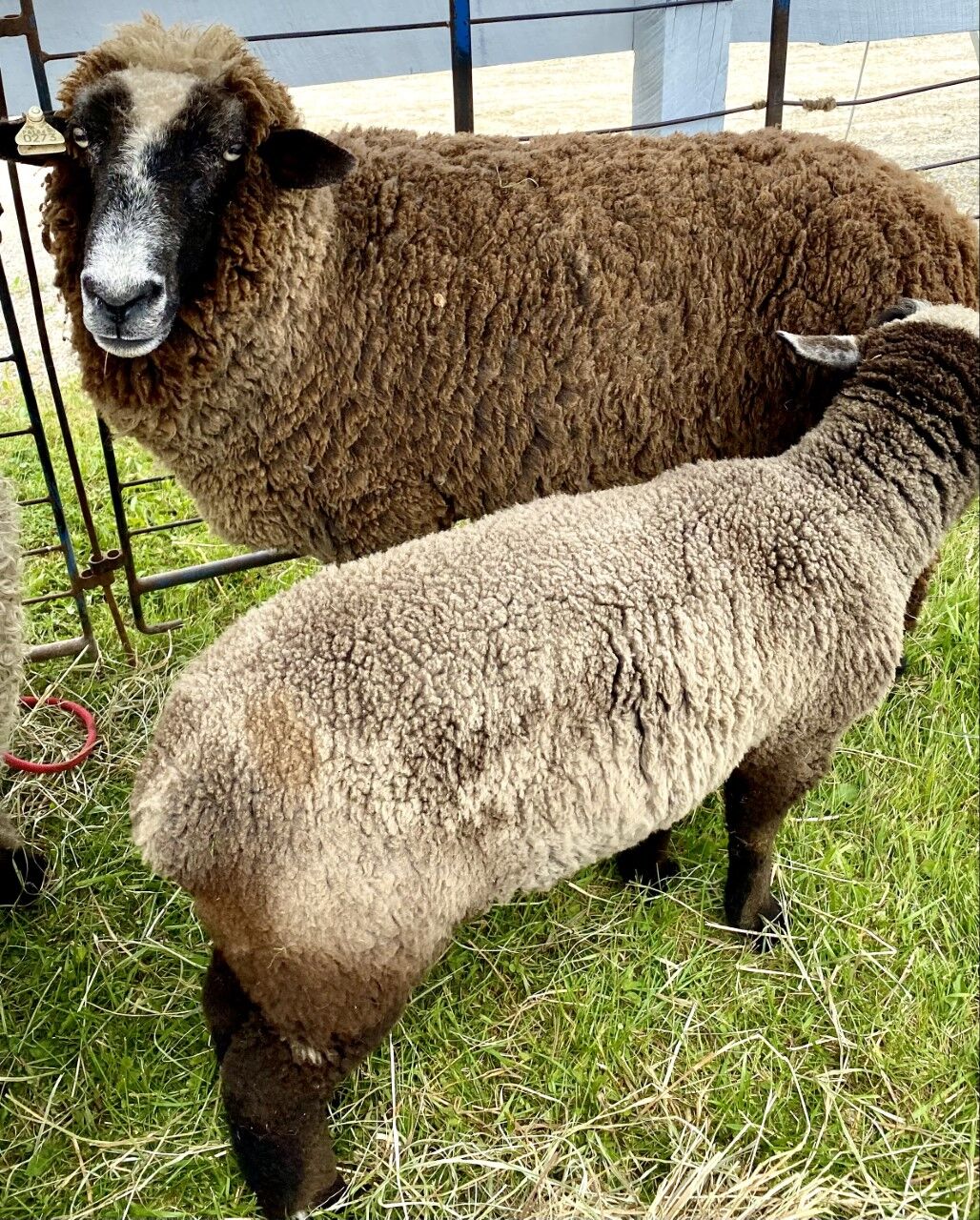 These sheep were on display May 22 at the Sheep and Fiber Fest at Greene County Fairgrounds. 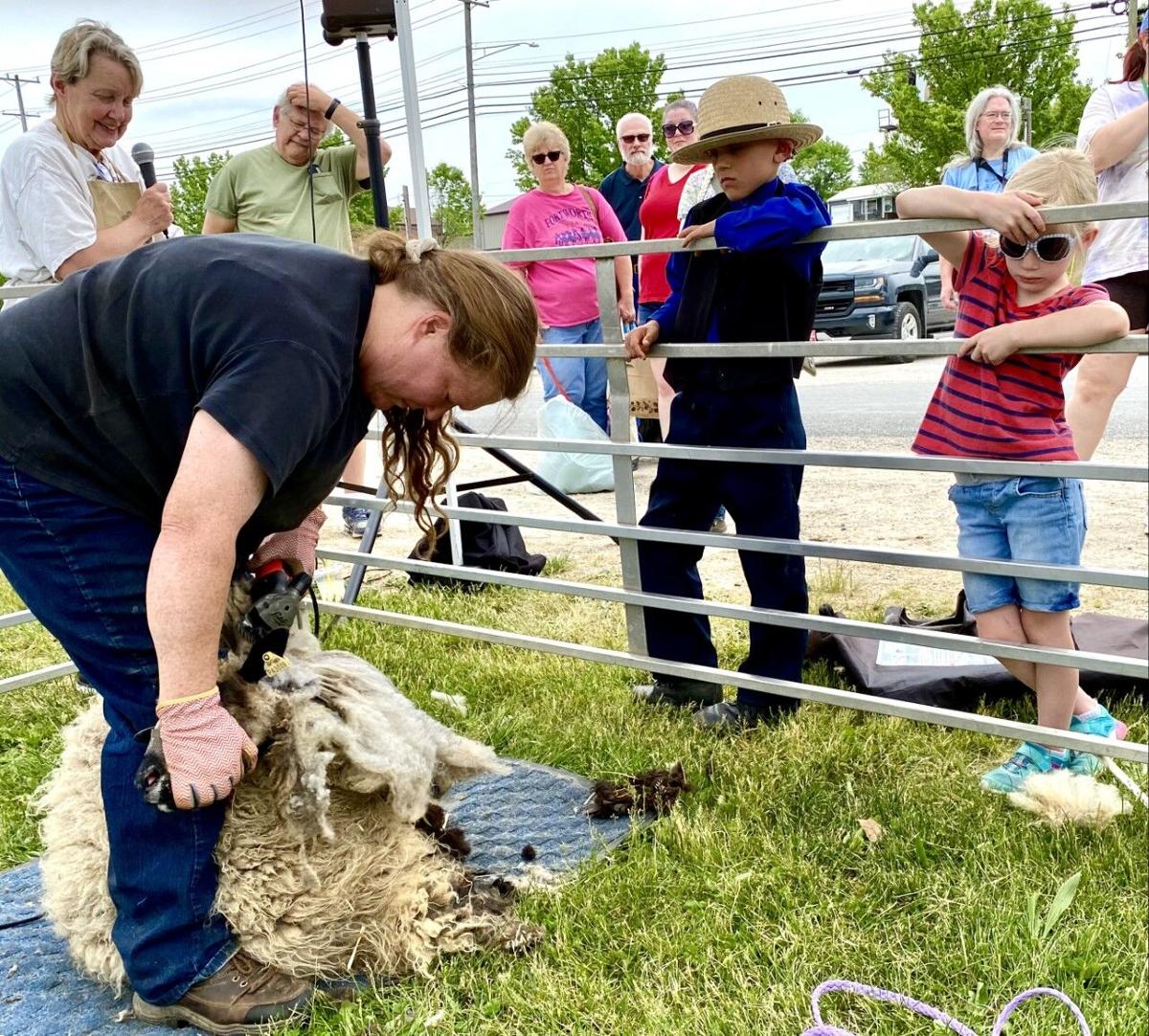 Lynda West and Jessica Magby take part in a sheering demo during the Sheep and Fiber Fest at Greene County Fairgrounds. 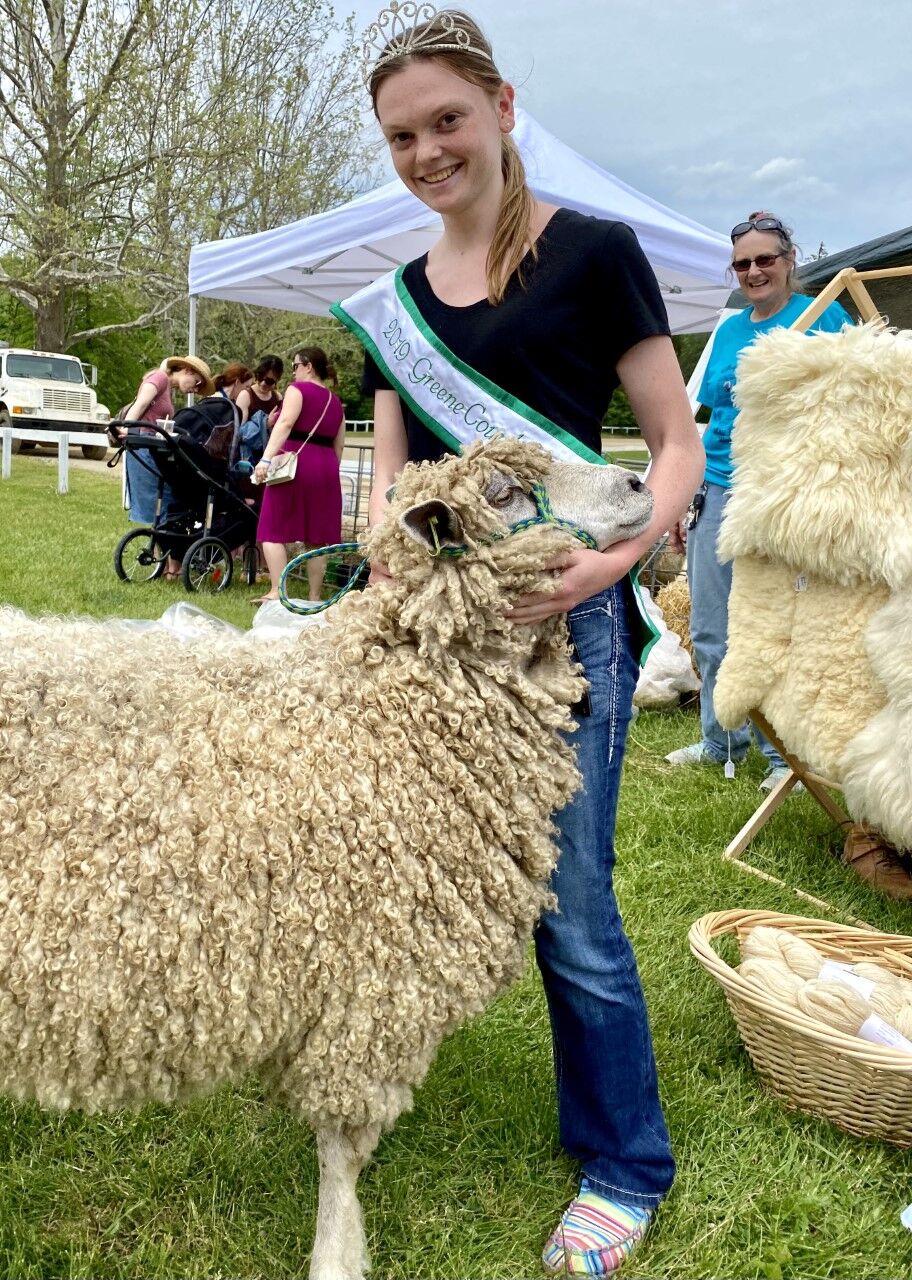 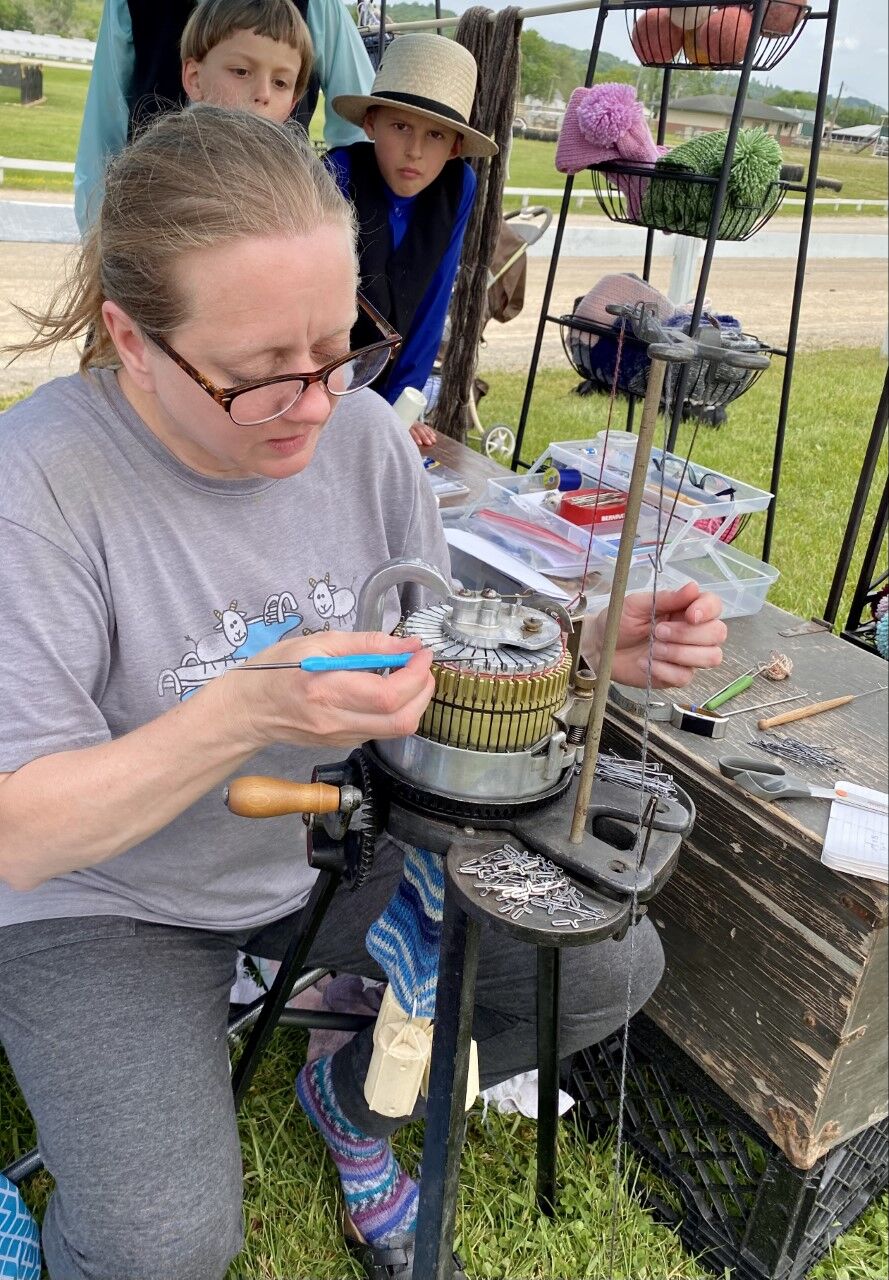 Amanda Preston works on the antique sock machine at the Sheep and Fiber Fest at Greene County Fairgrounds. 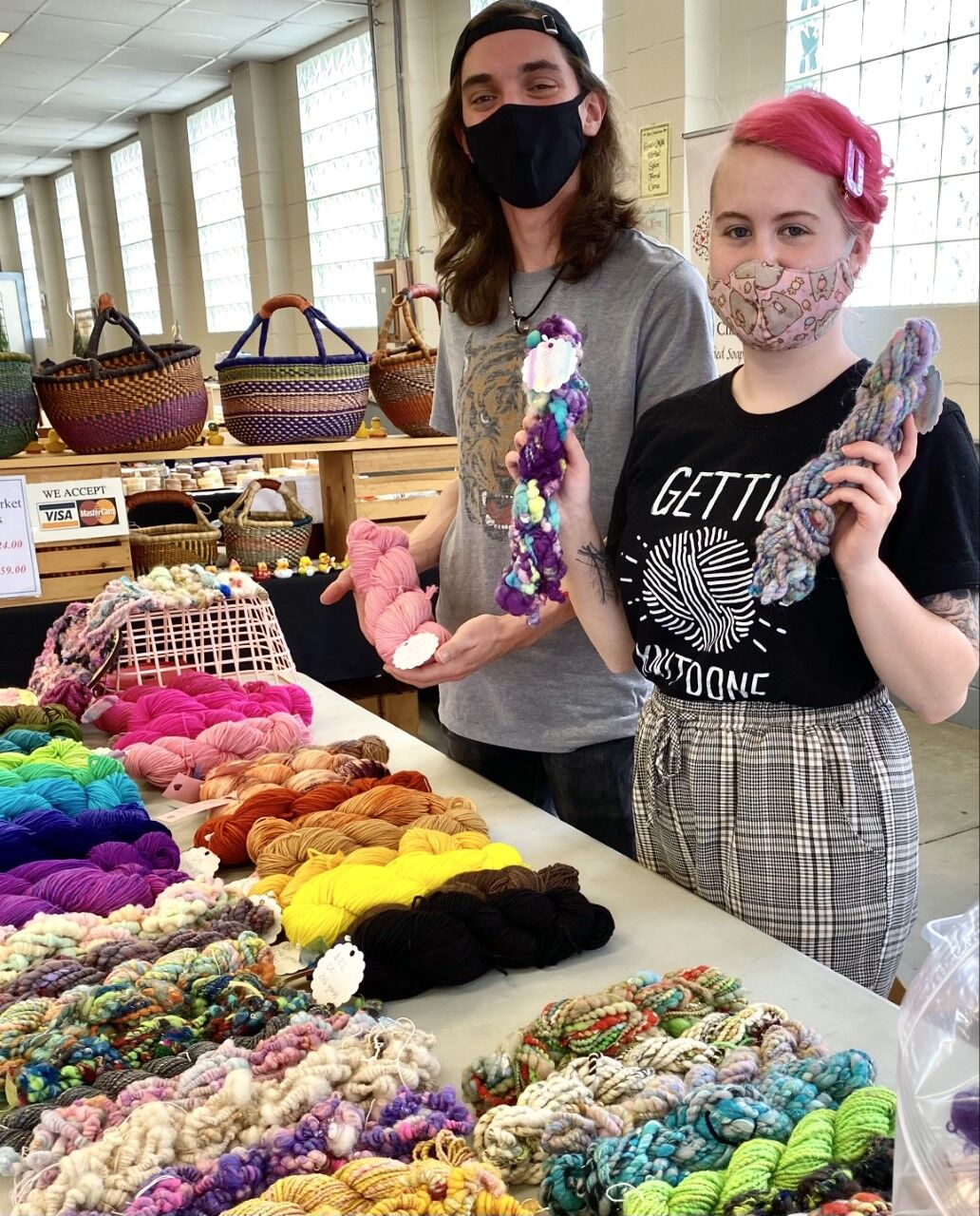 Megan of Rainbow Cake Cat displays some yarn during the Sheep and Fiber Fest at Greene County Fairgrounds. 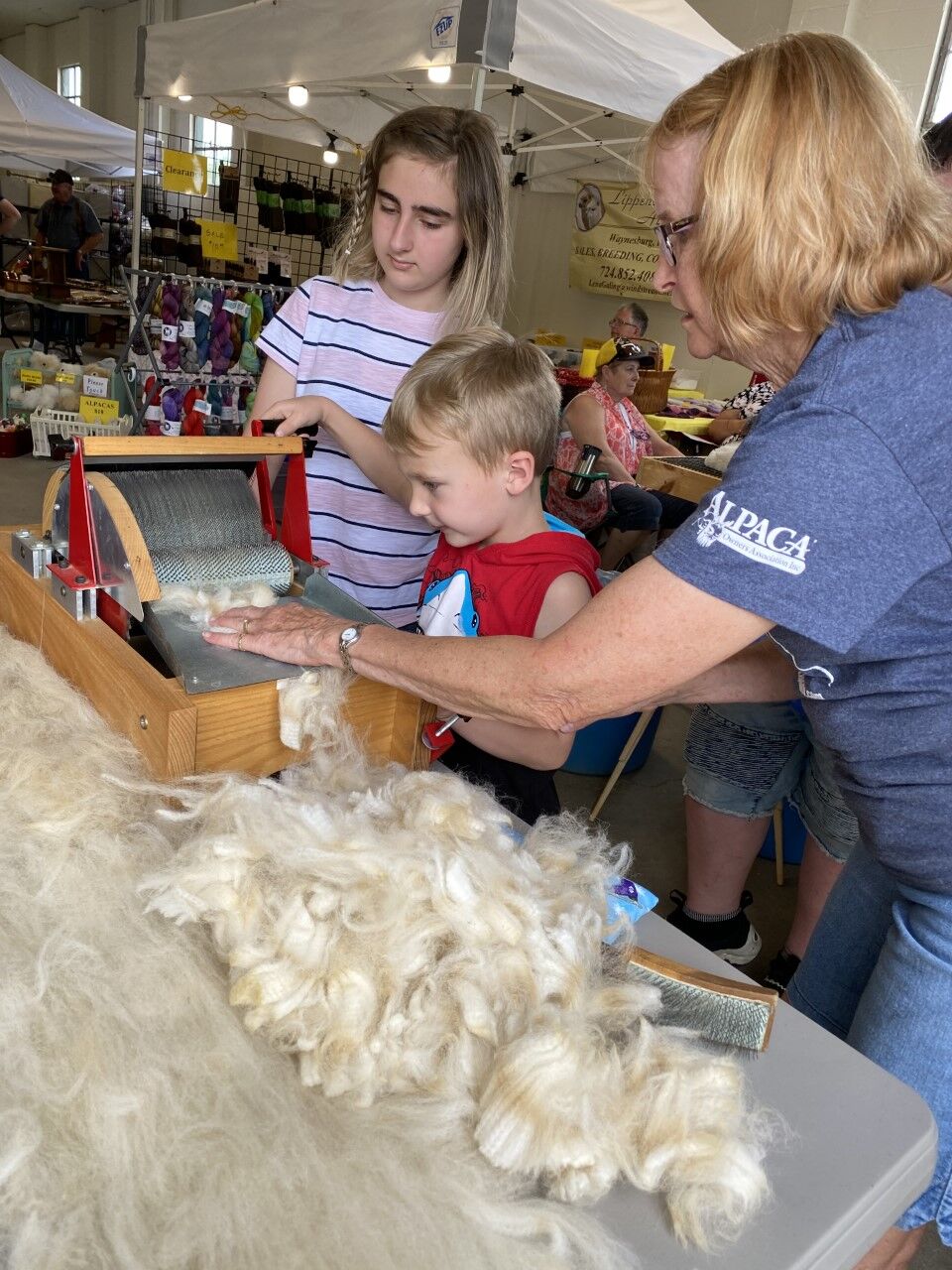 Festivalgoers take part in wool carding with Lippincott Alpacas during the Sheep and Fiber Fest at Greene County Fairgrounds.

These sheep were on display May 22 at the Sheep and Fiber Fest at Greene County Fairgrounds.

Lynda West and Jessica Magby take part in a sheering demo during the Sheep and Fiber Fest at Greene County Fairgrounds.

Amanda Preston works on the antique sock machine at the Sheep and Fiber Fest at Greene County Fairgrounds.

Megan of Rainbow Cake Cat displays some yarn during the Sheep and Fiber Fest at Greene County Fairgrounds.

Festivalgoers take part in wool carding with Lippincott Alpacas during the Sheep and Fiber Fest at Greene County Fairgrounds.

This year’s Sheep and Fiber Fest at the Greene County Fairgrounds was more than a festival.

The event represented a reunion for the vendors, volunteers, shoppers and farmers – many of them women – who raise sheep, alpacas and goats for their fiber and fleece.

After more than a year of isolation because of the coronavirus pandemic, festival participants were together again May 22, ready to celebrate all things woolly and wonderful – from biblical times to the present.

“We weren’t sure if we could do a festival this year, but my phone was ringing night and day, people asking about it. The vendors were ready, so we decided in March to go for it,” said festival board member Marianne Turchek of Rostraver Farm, Canonsburg. “We couldn’t put up the breeder pavilion or do lamb tasting, but we decided to do one day and see how it goes. The vendors are very pleased with their sales and we’re all glad to be here.”

Many people who came to shop were there for the specialty yarns produced by a wide variety of heritage sheep, known for the unique characteristics of their wool.

A trio of tightly knit friends brought pop up tents and heritage sheep and even an antique sock knitting machine to demonstrate the area’s relationship with the hardy, long haired grazers that followed people out of Africa to feed and clothe the world.

The sheep that Sarah Beamer, Heidi Hileman and Amanda Stewart brought are old, sometimes endangered breeds and each had a story to share, which was pinned to their pens.

Jacob, with its spare primitive body and tendency to produce more than one set of horns dates back to Africa and the Fertile Crescent of Syria, Iran and Iraq. Its piebald coat of dark and light wool is reminiscent of the colors Jacob is said to have selectively bred for in the Old Testament. While British royalty kept flocks on their estates for their novelty, British sheep farmers were busy developing heavier dual-purpose breeds that produced meat and fine wool.

These early breeds made their way to the American colonies to graze George Washington’s pastures.

A Border Leicester, the earliest breed to be recorded in British history, was on hand at the festival to let visitors know this sheep is docile, a good mom and prized for its lustrous fleece with an average length of five to 10 inches.

Another breed on display, Leicester Long Wool, is considered endangered. Its prize wool is “soft, curly and lustrous locks, staple length up to 14 inches.”

Sarah Beamer, a farmer with a doctoral degree who retired from teaching animal science at WVU, continues the work of genetics at home in Morgantown and said she is doing her part to “up breed” her flock by importing Kerry Hill sperm from the United Kingdom.

The import of breeding stock is now banned to control the spread of specific ovine diseases and pests, she said. Hopefully, in a few years America will have enough almost purebred flocks of this fine wool animal to start a new registry.

Most yarn and fleece vendors were longtime participants with a loyal following of area knitters who wait all year to browse their booths. New this year was Megan of Rainbow Cake Cat who brought bunches of bright, chunky hand dyed yarns that herald a new generation of knitters ready to take natural fibers to colorful new heights.

Sheep, as a rule are docile and are a favorite first project for kids who are starting in 4-H. For older kids who join Future Farmers of America (FFA) – in high school, more skills like shearing are added.

Greene County Fair Queen Sarah Calvert was crowned in 2019 and will reign until August when a new queen is chosen.

Calvert came to the festival with her crown and blue jeans on, mingling with the happy crowd swapping stories about country living. Calvert learned to shear in high school through the FFA and was trained by local sheep farmer educators. She earned her grade by helping with spring shearing on their farms and competing for prizes.

Long time sheep farmer Ralph Adamson of Oak Forest stopped by to visit after a morning of shearing his flock. Adamson’s skills are well known to festivalgoers – he’s done the shearing demonstration for many of the 17 years this event has been held.

Jessica Magby of Washington showed onlookers the ins and outs and ups and downs of shearing a frisky, first-year ewe, away from her lamb for the first time, while owner Lynda West of Marianna described each clipper stroke to a wide-eyed audience.

Magby, a philosopher by degree but a sheep farmer by choice, leaned on the gate afterward and reflected on the connection between working the land and the workings of the mind.

The connection between Aristotle and those who spend long hours dealing with the natural world, tilling, tending and contemplating the complexities of life, is time.

Time to observe and consider.

Time to think about heritage breeds and quality of form and fiber. Time to see our connection to that which sustains us all. After all, it was citizen farmers like John Adams, who plowed his father’s fields in Massachusetts with a book of Greek philosophy tucked in a back pocket, who envisioned, then helped create a new land of democratic ideals.

Magby, a Washington & Jefferson College graduate, taught philosophy for a few years before going into retail for the better paycheck. She said her husband pointed out she wasn’t making enough to pay for the gas to get there.

Now this stay-at-home-philosopher mother said she tends to her flock of long-wool sheep and shears whenever she gets the chance.